The large space on a prime corner has been vacant since Plum closed in 2018. 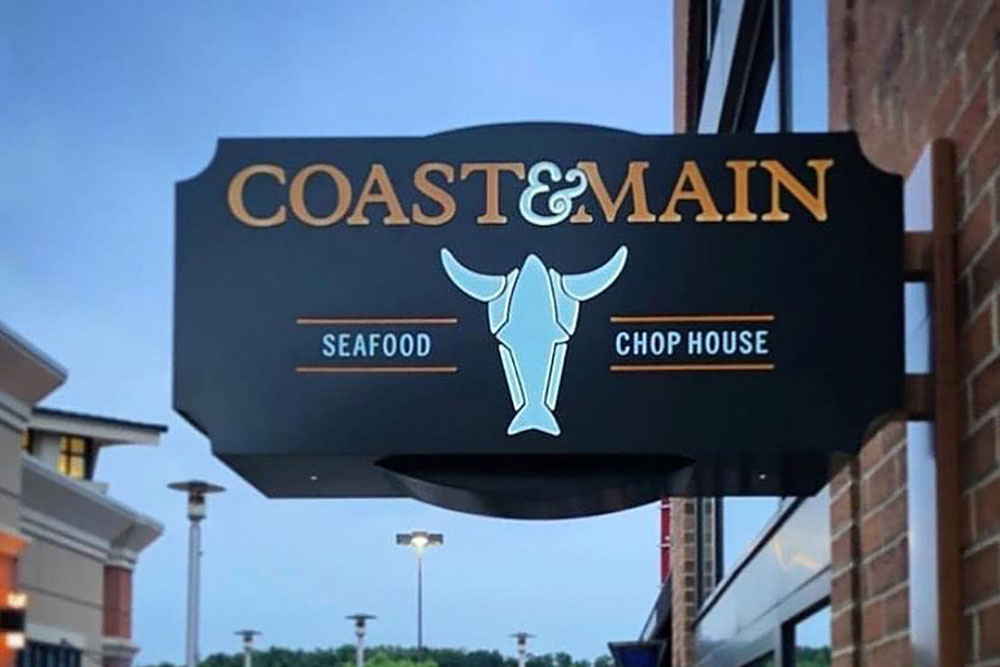 A taste of the Pacific Northwest is coming to Pittsburgh’s East End.

Coast & Main, a steak and seafood restaurant inspired by the flavors of Portland, Oregon, and surrounding areas, gained traction after it debuted at the Monroeville Mall about four years ago. Now, its owners, Michelle and Ricky Kirsop, have partnered with Herky Pollock and his wife, Lisa Acquaviva Pollock, to bring a second location to the space that once held Plum Pan Asian Kitchen at 5996 Centre Ave.

Pollock, an executive vice president and the northeast director for commercial real estate company CBRE, has been representing the East Side development for the last six or seven years. He has been hoping to put something in the spot since Plum closed, and he says Coast & Main’s small plates will fit it nicely in the city’s East End — and stand out on a crossroads already dense with restaurants like Chipotle, Square Cafe, Muddy Waters, Piada Italian Street Food, Paris 66 and more.

Pollock says that the location has always been, in his mind, a marquee spot, given the near-constant development happening all around East Liberty, Bakery Square in Larimer and surrounding areas. He adds that the fact that the space held a restaurant before helps, too; there’s a lot of infrastructure already in place that they’ll be able to use for Coast & Main, which he hopes will be open by the end of the year, barring any pandemic- or supply-chain-related hiccups.

“When you think about many of the preeminent restaurants in Pittsburgh, they are in the East End,” says Pollock, a lifelong East End resident himself. “A lot of the foodie scene has evolved as a result of the East Ends and it has grown from there. So to have the opportunity to bring something to the city and to a neighborhood that is accustomed to finer dining and impeccable food definitely seemed like a logical progression.”

It’s a view shared by Michelle Kirsop, who along with her husband first brought Coast & Main to the city’s eastern suburbs, where she grew up.

“The thought was to bring fresh steak and seafood to that area without needing to travel into the city. But there’s certainly a need for a concept like ours in [the East End]; we already have people who drive from different parts of the city out to Monroeville,” she says. “It’s definitely a good fit and I think that type of cuisine that we offer … is the perfect complement to that area.”

She also explains that the East Liberty site will not be a carbon copy of its Monroeville flagship; instead, it’ll have its own twist to fit the space it occupies, including an innovative cocktail menu, ample shareable sides, plenty of small plates and more — all with a heaping portion of hospitality.

The goal is to appeal to the wide range of residents, young professionals and visitors who pass through the East End. It’s something Kirsop calls “approachable fine dining.”

“We’re able to cater to a variety of different needs based on what we do, and I really believe there’s something for everyone,” she says. “You want people to feel comfortable, and you want to get to know the guests who come into the restaurant.”

The new spot is roughly 5,500 square feet, right on the corner of Centre and Highland avenues. Guests can expect what Pollock calls “very unique design elements,” influenced by various locations around the country the Pollocks and Kirsops traveled to for inspiration. They’ve partnered with Pittsburgh-based NEXT Architecture and Bootstrap Design, based in Mount Lebanon, to ensure that the quality of the design matches the quality of the food.

“We’re hoping to follow the trend where you can have good food, great design and great service and all of those will work in tandem to create a dining experience unlike anything else you’ve seen in Pittsburgh to date,” he says.

Coast & Main is one of two endeavors born from the partnership of the Pollocks and Kirsops. The second, slated to open in the late fall, is called Ritual House. It will be taking over the former Union Standard location in the Union Trust building, Downtown. Kirsop describes it as “an elevated, American cuisine with global influence.”

Operating as a “sister restaurant” to Coast & Main, Ritual House will feature four floors full of different nooks and crannies, offering a variety of dishes for a variety of occasions from happy hour and brunch to large-scale celebrations.

“We hope you’ll be able to come there five different times and each time you sit in a different part of the restaurant and take home a different experience,” Pollock says. “It’s all about creating moments and experiences.”

Pollock says his wife Lisa — a partner on both projects, too — termed it “a quirky, elevated, sophisticated funhouse.”

“It’s going to be something very unique to Pittsburgh,” he says.