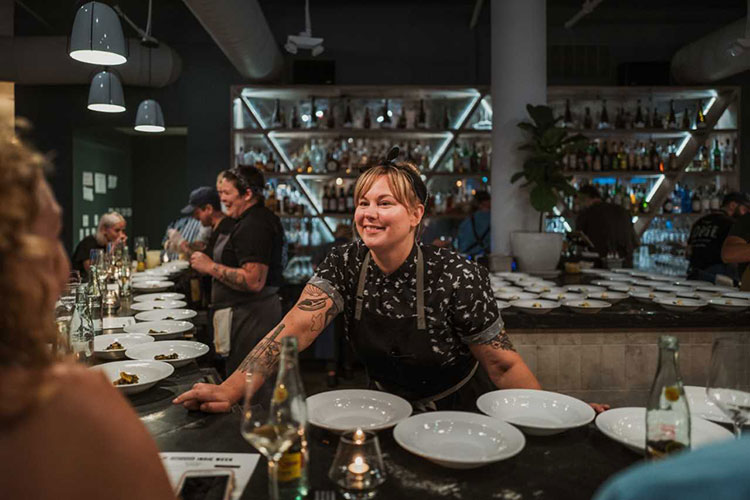 Chefs visiting a city for a collaborative dinner typically arrive a day or so prior to the event and they don’t have a lot of time to get to know the place they’re visiting or the people who work in that city’s restaurants. Typically, they prepare what they’re making and perhaps celebrate with a nightcap or two at a neighboring bar or maybe a meal at a hot restaurant. They don’t get to spend a significant amount of time deepening connections with most of their colleagues before heading home.

ChefsFeed Indie Week takes a different approach to collaboration. It invites award-winning chefs from around the country to participate in an all-expenses-paid long weekend that includes a curated restaurant, brewery and bar tour of the city they are visiting and a day-long, deep-dive Saturday day off during which the chefs will get an even more in-depth sense of place for where they are visiting, as well as a something that’s a rare luxury for a working chef: an elaborate Saturday night meal prepared for their enjoyment.

“If you’re a chef in Pittsburgh, you might know what’s going on in Philadelphia, in New York, Chicago, maybe the new hot food city. But you might not know what’s going on in all these small markets all over the place. Creating relationships across small markets helps chefs expand their networks,” says Grover Smith, who heads up events for ChefsFeed and co-created the dinner series.

To that end, Justin Severino of Cure in Lawrenceville will host the first-ever Pittsburgh stop for ChefsFeed Indie Week, which will feature three nights of collaboration dinners featuring 13 award-winning chefs flown in from around the country. On Thursday, Oct. 11, half of the group will cook a six-course meal at Cure; the following day the other half will do the same. The entire cohort will pair off and collaborate on a six-course dinner on Sunday, Oct. 14.

“Putting all the energy into the chefs 100-percent translates into the guest experience. You couldn’t ask for a better scenario for a chef to be inspired to cook. We’re all going to be trying our hardest to impress each other,” says Severino, who participated in the first Indie Chefs week in 2014. 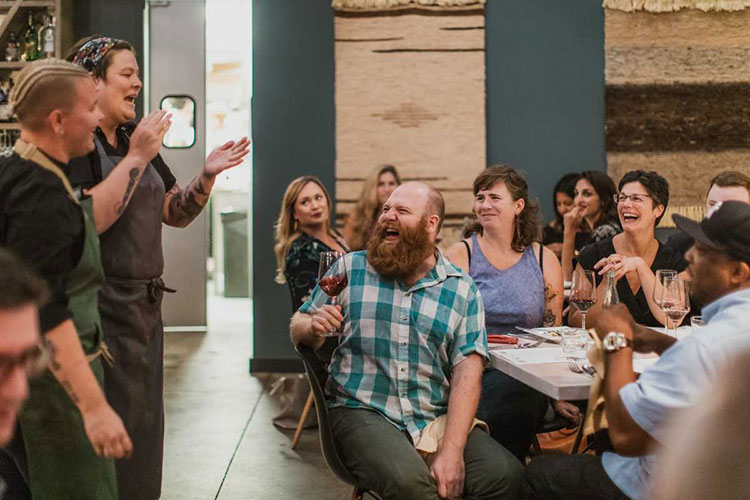 “When you have five or six chefs who show up before with most things prepped ahead of time, it’s ‘let’s get down to business and do our dishes.’ It’s a lot more personal this way. I think guests will notice that camaraderie,” says Fox, a multiple James Beard award nominee who is making a rare out-of-town appearance for this event.

That anticipated camaraderie will be on full display during the meals. The participating chefs don’t just hang out with each other, they’re interacting with the guests, too. Dishes are plated in view of the dining room. “We call it culinary theatre. It’s interactive. We want you to take pictures and talk to the chefs,” Smith says.

ChefsFeed Indie Week also will precede the re-opening of Cure, which Severino currently is renovating, on Oct. 17. Look for a redesigned interior and a new menu format with will feature a $65 tasting menu (all of which will also be available a la carte) as well as a renewed focus on vegetarian options. “As I’ve been renovating Cure, it reminds me of how much this restaurant is part of me — the food I want to cook, the hard work I put into it. I don’t think it’s fair to settle in and ride it out. If I’m going to walk in the side door every day, this is the opportunity to move things forward again,” he says.