Catching Up In San Francisco With Pittsburgh Chef Sean Ehland

The former Kaya executive chef now is the pastry chef at one of the country’s buzziest new restaurants, Nari. 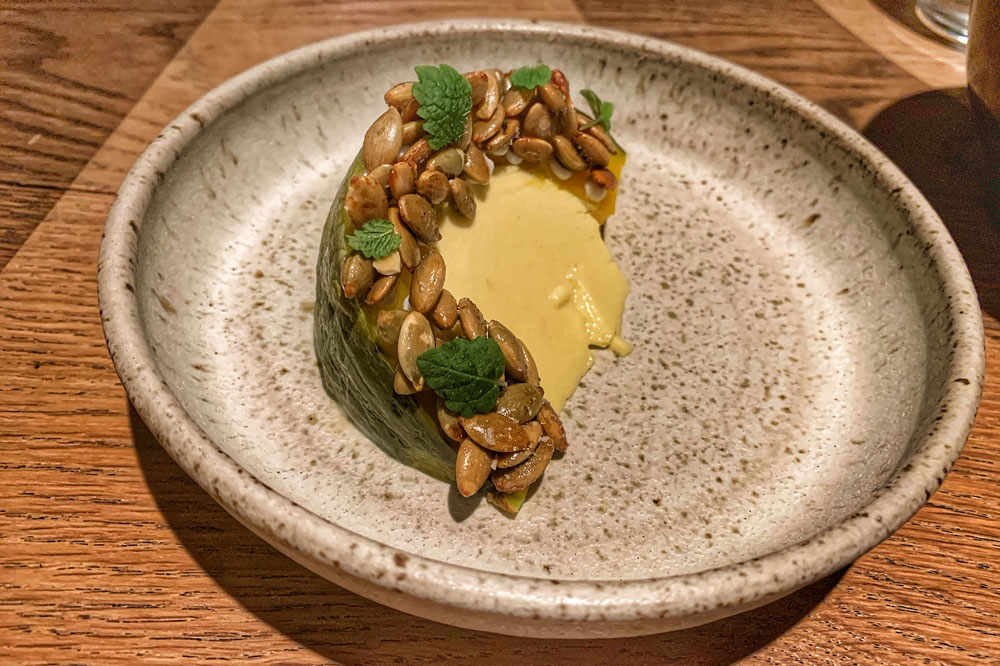 Sean Ehland has a dish on the menu at Nari in San Francisco called Wan Yen. It’s a spin on the popular Thai snow cone with the same name. Ehland tucks pomegranate and pumpkin jellies, Asian pear, kiwi and raspberries under a snowfall of shaved ice and serves it with a light coconut sauce. Eating the dish tugs the heartstrings of childhood delight; I’d challenge anyone not to smile following the first bite.

His vibrant dessert is a perfect foil for the restaurant’s savory menu, which explores the heritage of Thai cuisine while pulling from Northern California’s enviable well of seasonal produce. “I want to carry what we’re doing through to the desserts as well. We think about what the guests have just eaten and how to pair this menu to that,” Ehland says.

Nari is owned by Pim Techamuanvivit, the Michelin-star chef who also runs San Francisco’s Kin Khao, as well as Nahm in Bangkok. According to the Nari website, the restaurant is a “tribute to generations of Thai women who laid the foundation for Thai cuisine, and a personal love letter to the women in her life who taught her to cook and, more importantly, to eat.”

The restaurant, which opened in August, is getting a lot of attention: San Francisco Chronicle dining critic Soleil Ho called it San Francisco’s most exciting new restaurant in her November review, and Esquire food and drink editor Jeff Gordinier lauded it as number two on his Best New Restaurants in America 2019 list. 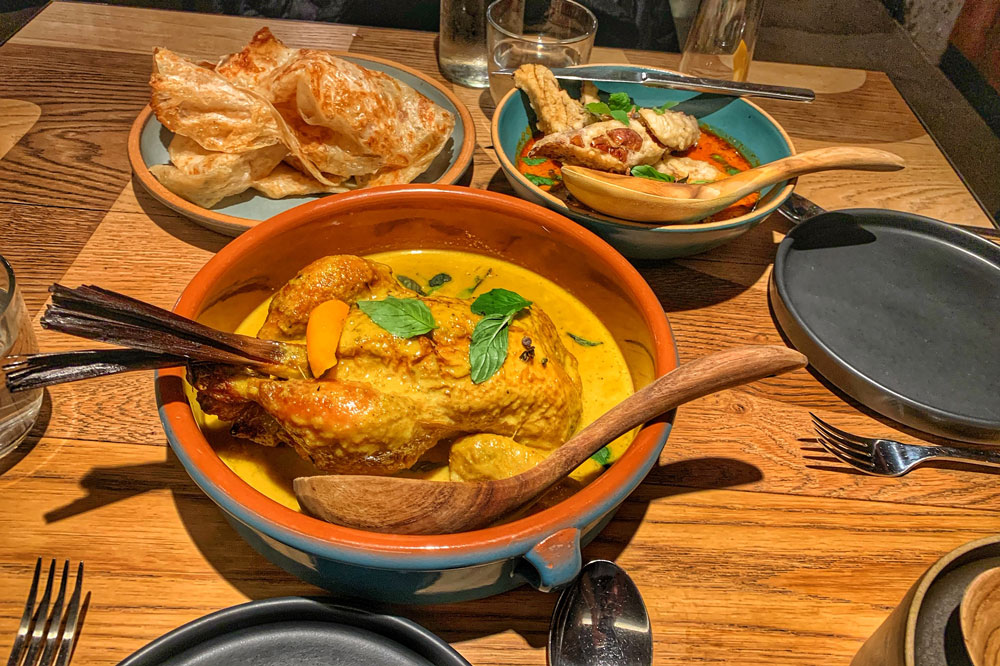 Meghan Clark is the restaurant’s chef de cuisine, and she brought Ehland, with whom she had worked at the Michelin-star Aster, aboard. “There is a lot of research involved. It becomes a rabbit hole of finding a base technique and then working with Megan to experiment with how we can make that work here for our clientele,” Ehland says.

I visited Nari on a recent trip to San Francisco to see what Ehland, a Robinson Township native, was up to. I’d first written about Ehland, who spent his early career rising through the ranks of the big Burrito Restaurant Group, in 2016, when he was working as the pastry chef at Aster. In the intervening years, he honed his skills running the bread program at Marla Bakery, which recently announced that it was moving outside of San Francisco.

I’m sure glad I stopped in for a meal. With dishes such as miang (persimmon and pomegranate, trout roe, fish sauce caramel on a betel leaf), gaeng rawaeng (whole Cornish hen in rawaeng curry, served with Ehland’s dreamy roti) and gaeng bumbai (impossibly crispy yet chewy eggplant in an aromatic, brick-red curry), it was one of the most thrilling meals I’ve had in a long time. I was smitten by the alluring depth of flavor and texture in each dish. 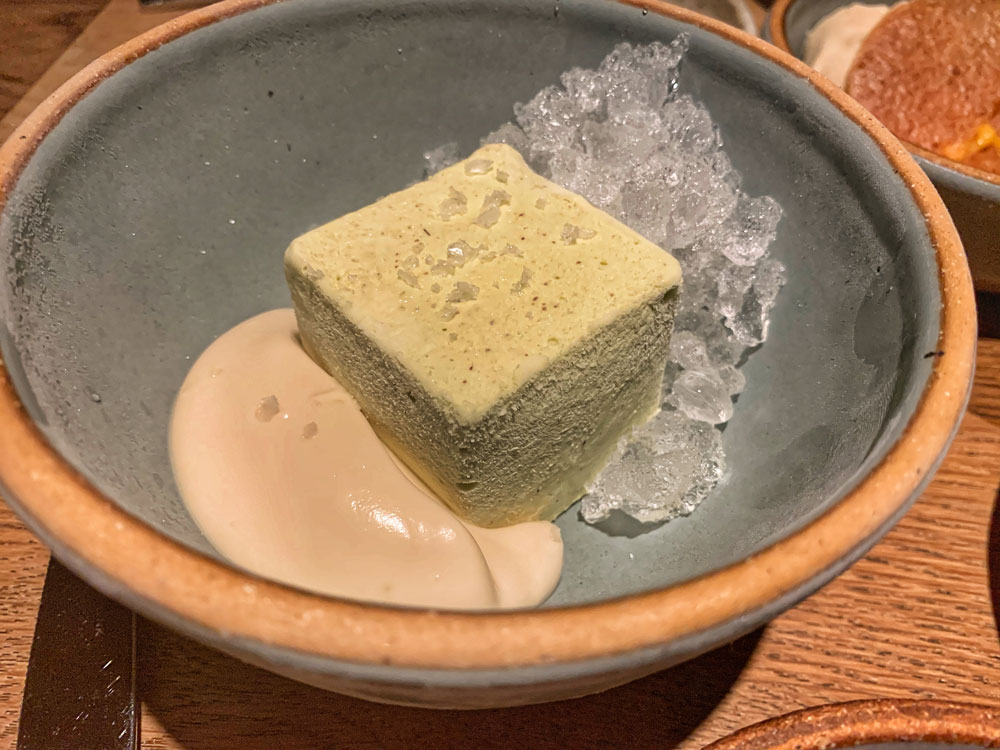 Ehland extends that exploration to his menu, where he takes some whimsical turns while still sticking close to the flavors one might expect to find in a Thai dessert. In Dreaming of Lod Chong, Ehland turns a typically creamy, jellified expression of pandan (a floral, grassy tropical plant popular in Southeast Asian kitchens) on its head. Padding the base of a block of pandan parfait are grains of toasted rice. It’s served with coconut cream and chipped ice, which adds a crunchy texture to the dish. For pumpkin sangkaya, Ehland slowly candies in-season Kabocha squash, inlays a core of coconut custard and coats the outside of the gourd with candied pumpkin seeds. He explores five different textures and flavors of coconut in Babin coconut cake.

While Ehland might have left Pittsburgh in 2011, he still holds the city close to his heart. If you’re ever in San Francisco, put Nari on the top of your dining list — not only will you treat yourself to a memorable meal, you’ll be supporting a Pittsburgh chef making us proud on the other side of the country.