Sam Orlowski made “Thanks to Her,” a gay coming-of-age short film, during her senior year at Pitt. There was just one problem — she hadn’t come out to her family yet. 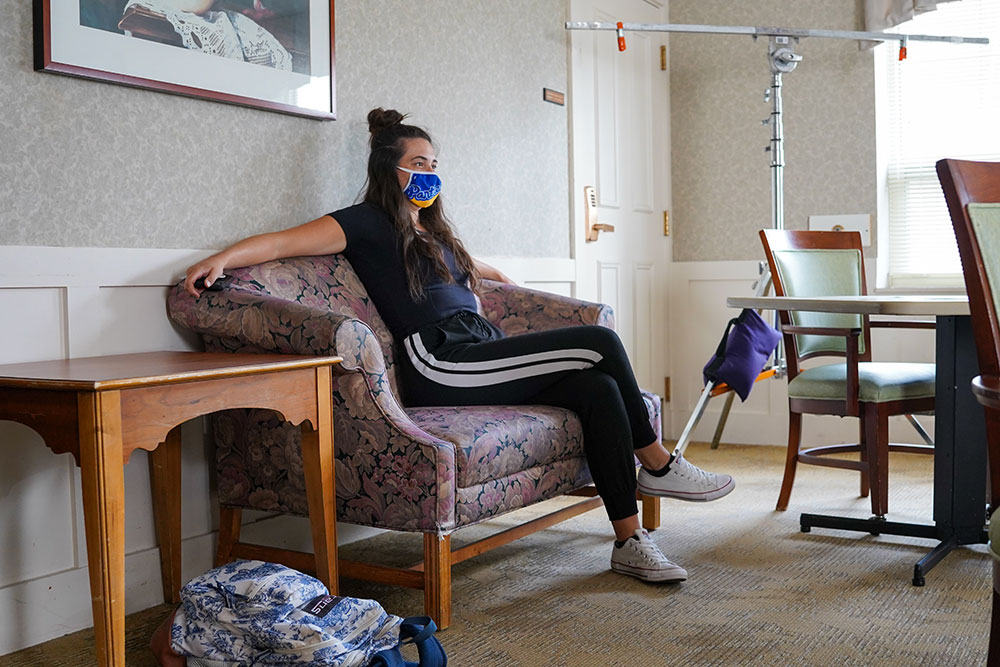 When Sam Orlowski posted her short film “Thanks to Her” on YouTube a little over a year ago, she didn’t think much of it.

“Then it just exploded and I was like ‘How? How did this happen? How did we get here?” says Orlowski, 25, a Canonsburg native.

Orlowski, who describes the response to “Thanks to Her” as “bewildering,” initially wrote the story as a feature-length script for a class assignment during her senior year at the University of Pittsburgh. (scroll down to watch the film)

While she didn’t expect much to come from the assignment, her professor, Carl Kurlander, encouraged her to apply for a grant and turn the script into a short film. Orlowski and a classmate condensed the feature film into a script just over 20 minutes long, which she and other Pitt students shot for her Capstone project in the spring of 2019.

A drama set in high school, “Thanks to Her” explores the complexity of sexuality and the difficulty of coming out. When a student’s homophobic comment incites a fight between Millie Blake (AJ Molder), a reserved soccer player, and Andy Wellick (Julia de Avilez Rocha), an out and self-assured lesbian, the two are punished with a month of community service at a nursing home. Andy and Millie’s time together creates a budding friendship that sets the foundation for Millie to come to terms with her own sexuality, despite navigating a world consumed by straight expectations.

In addition to amassing over a million views, “Thanks to Her” was a 2021 Rising Voices Film Festival Award Winner and garnered over 1,200 YouTube comments, many of which articulate the impact the film has had on viewers’ own lives.

There were “just so many people reaching out saying ‘I’m going through something similar, this really helped me’ or ‘I’m closeted too and this gave me a little bit of courage,’ or ‘hey this is the representation we need because we never see this on TV,’” she says.

Fed up with the lesbian characters she saw on television who were often overly sexualized or killed off, Orlowski wrote “Thanks to Her” as a way to create lesbian content that’s “wholesome and nice but also realistic.” When Kurlander told her class that the best stories come from personal experience, she decided to incorporate parts of her own coming-out journey in the film. (He should know: he co-wrote the semi-autobiographical “St. Elmo’s Fire,” a 1985 coming-of-age hit movie and has worked on several teen sitcoms.)

Orlowski, who identifies as asexual and biromantic — she doesn’t experience sexual attraction, but is emotionally attracted to both men and women — didn’t really think about her sexuality before leaving Canonsburg, which she describes as “not homophobic, just very straight.”

Extended family and friends “would put their own views on you like ‘One day you’ll have that white picket fence with that husband and those blond children,” Orlowski says. “I could have a wife, we could adopt kids — there’s a million pathways and it would just bother me when anybody would assume my future.”

Having made movies on her parent’s camcorder since she was 5, Orlowski knew early on that she wanted to pursue a career in film. She chose Pitt for its proximity to her family and, having visited the school frequently for competitive swim meets in high school, because it already felt like home — comfortable; safe.

It wasn’t until she went to college that she realized she didn’t have to be stuck as the same “cookie-cutter girl” she was in Canonsburg.

My sexuality “was something that I just discovered when I got to Pitt, when I met new people, when I had new experiences and heard different points of view,” she says.

Orlowski says she didn’t face any issues when she came out to her friends at college — she even found a community of other LGBTQ+ students through her classes. But by the time she finished filming “Thanks To Her,” she still hadn’t come out to her parents.

“That’s when things started weighing on me a lot because I wanted to tell them but I kept chickening out,” she says.

Orlowski says Millie Blake’s storyline about struggling to come out wound up modeling her own situation. She wrote the out-and-proud Andy Wellick as someone she imagined herself being in the future. The story, set in a heteronormative town, resembles Canonsburg and includes dialogue that constructs the lifestyle norms she heard growing up.

Orlowski knew her family would react well, but similar to Millie in “Thanks to Her,” struggled to say the words.

Millie “wants to tell Andy [she’s gay], she knows it’s a safe space, but it becomes a reality when you say it out loud. It becomes concrete,” she says.

Orlowski ripped the Band-’Aid off by coming out to her entire family in one night. Nervous and shaking in the kitchen, she began by telling her mom. Then she made the rounds to see her brothers.

Having already known the premise of “Thanks to Her,” Orlowski’s family wasn’t all that surprised about her sexuality; the short film did most of the explaining for her, as she hoped it would. But it also resonated with thousands of people.

The reaction to “Thanks to Her” was so overwhelming that Orlowski decided to give the full feature-length story a go. She launched a Kickstarter campaign in February that raised over $36,000 for the film, which was shot in three weeks over the summer. Orlowski hopes the editing will be done by May; the final product would have a runtime of about 90 minutes.

Pittsburghers who watch the feature may notice a few familiar locations, including the Residence at Weinberg Village near Summerset, where all the scenes in the nursing home were shot, and Winchester Thurston, an independent school in Shadyside.

“Thanks to Her” fans anticipating the arrival of Orlowski’s full-length feature should savor it when it does come out. Orlowski, who prefers to edit, says she probably won’t write another film unless it’s something she’s really passionate about. She’s currently deep in the sports world, where she does film production for the Pitt Athletics department and freelances for the Penguins.

But even in sports, Orlowski discusses her sexuality the same way Andy Wellick would.

“I literally just tell anybody on the street ‘Oh yeah, I’m bisexual,” Orlowski says. “I just walk around not caring anymore…I’m just being me.”