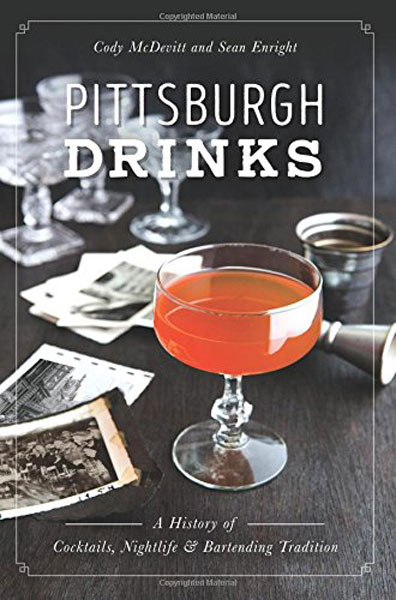 Pittsburgh’s cocktail and bar culture is booming. At top-flight bars such as Butcher and the Rye, in the numerous new brewpubs and on the party-time bacchanalia of a South Side bar crawl, (sometimes hazy) memories are made every night in Pittsburgh. Want to know how it started and what happened along the way? Pick up Sean Enright and Cody McDevitt’s new book, “Pittsburgh Drinks: A History of Cocktails, Nightlife & Bartending Tradition,” for a look at the city’s drunken history.
​
Enright, a foundational member of Pittsburgh’s modern cocktail resurgence, says that he started compiling a compendium of bartender cocktail recipes about four years ago. McDevitt, a reporter for the Somerset Daily American, also was a budding expert on Pittsburgh bar history, spending his spare time researching reporting of decades of drinking in newly available online archives. The two decided to collaborate on a book after an exchange on Twitter prompted by Enright’s posting of a blog on cocktail history in Pittsburgh.

The first half of the book, written and researched by McDevitt, is a deep dive into the history of Pittsburgh bars. It begins with a look at pre-Prohibition speakeasies, a term coined by bar owner Kate Hester, who ran an unauthorized saloon in McKeesport. McDevitt follows the trail through the heyday of the industrial age, Pittsburgh’s historical connection to jazz, Shadyside’s moment as a hippie haven, the go-go discotheque era of the 1970s and the nightclubs of the 1980s, all the way to opening of Embury, the bar that kicked-off today’s cocktail comeback.
​
McDevitt focuses a significant amount of attention on the rich history of women and minority bar owners and bartenders in Pittsburgh, as well as reliving history through the lens of the city’s vibrant cultural cocktails reporters from Charles Danver to William Toland.

Enright’s role in the first section was researching and recreating historical cocktails that had limited recipe information. "He'd (McDevitt) give me a cocktail from the 1800s with a recipe that read something like 'bitter, molasses, whiskey' and I'd have to recreate the recipe based on very little information,” Enright says.
​
Enright publishes scores of recipes from the Embury-and-beyond era in the second section of the book, “Who We Are and the Drinks We Make.” He also profiles six of the key players (Spencer Warren, Fred Sarkis, Gretta Harmon, Carrie Clayton, Rob Ricci and Monica Ruvolo) in Pittsburgh’s modern cocktail era.

The release party for “Pittsburgh Drinks” is Monday, March 27 at Spirit in Lawrenceville. The six profiled bartenders all will be behind the bar, as will a second shift influential bartenders Maggie Meskey, Summer Volker, Nicole Battle and Heather Perkins. Bartender-led bands Byron Nash & Plan B, The Bessemers, Dewey Markee and Elliott Sussman will provide entertainment.