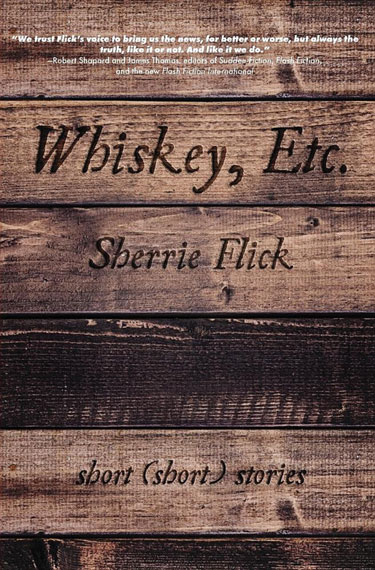 As a kid who enjoyed building Escher-like, physics-defying structures out of Legos, one of my favorite exhibits at the Carnegie Museum of Art in Oakland was the miniature room. It’s an easily passed over cul-de-sac containing glassed-in dioramas of exquisite Regency and Victorian parlors and studies rendered in painstaking miniature. I was amazed at the level of detail possible in such a small-scale recreation; from the patterned fabrics to the texture of the wooden furniture, these Lilliputian marvels hint at larger worlds just beyond the tiny tinted windows at the rear of the displays.

Flick, who teaches in Chatham University’s Creative Writing and Food Studies masters programs, is a virtuoso of pocket-sized fiction, and her new story collection, Whiskey, Etc., makes that abundantly clear. Known as flash fiction or sudden fiction or short-shorts, the style of storytelling Flick has made her métier is a highly pressurized space in which stories and sometimes even whole novels are reduced to an incredibly potent concentration.

The story “Preoccupation,” for instance, contains 62 words and acts as a kind of ars poetica. In it, a gift of a miniscule Christmas tree with a full complement of ornaments and toy train is delivered by mail. Also included, “were live microscopic mice wearing striped stocking caps. They sang (in harmony!) but wreaked all kinds of havoc once they got bored.” It’s easy to see Flick’s mischievous imagination in those chapeau-garbed, heavenly voiced mice up to all sorts of page-turning devilment set loose in the abbreviated universe of these short-short stories

A story such as “On the Rocks” is a character study that requires the reader to create characters Bob and Sarah as well as the entire history of their relationship from the small, carefully chosen details Flick provides. There are implications about both characters in this opening, “Bob drank scotch. Always. ‘On the rocks,’ he said, nodding to the bartender. He said it solemnly and because of that Sarah took him seriously.” It’s not simply Bob who is revealed when Flick describes how he crosses his legs, or the type of cigarettes he smokes, “a long, thin 100,” or the lighter his father gave to him, but Sarah as well. These are the details she notices, what she is drawn to and what she chooses to believe about Bob. In three short paragraphs, Flick gives the reader everything he or she needs to create the rest of their inevitable story.

The concision of Flick’s fiction creates a very intimate experience between reader and author. Reading “Whiskey, Etc.” feels as if the author is sitting next to you whispering the stories in your ear, as though the two of you, attending a loud party, had made a corner of the room your own private island. You concentrate on the hush of warm breath in your ear, every word and every image.

You only have this short time together, and Flick has something very important to tell you.