Big Changes Are Coming to Fish Nor Fowl

We have details on the launch of the restaurant's second chapter, plus updates on other Richard DeShantz Restaurant Group projects. 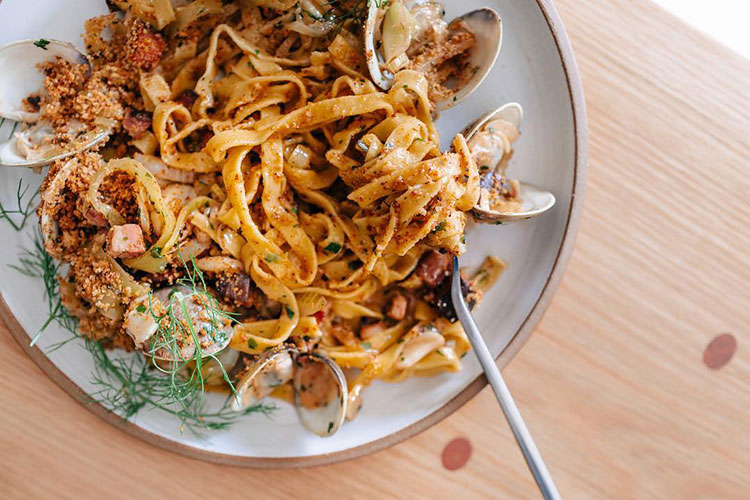 Significant changes are coming to Fish nor Fowl in September. Richard DeShatnz, chef/co-owner of the Richard DeShantz Restaurant Group, says that to mark the restaurant’s first year of service, he’s shifting the focus of the Garfield establishment. “Chapter Two,” he says, will put the spotlight on pasta.

“The whole idea of Fish nor Fowl is that it’s never going to be just one thing. The idea was to cook whatever you wanted and what inspired you,” DeShantz says.

DeShantz and executive chef Dan Carlton launched Fish nor Fowl with an eclectic, often-changing menu of New American cuisine, plus a cocktail list to match. That concept found a loyal following and earned a spot on Pittsburgh Magazine’s 2019 Best Restaurants list, but, DeShantz says, it didn’t bring quite the energy he wanted into the building. “Right now, this space might be a little intimidating to some people. Pasta reaches out to a wide audience,” he says.

DeShantz, Carlton and sous chef Ryan Peters are collaborating on the development of the new menu. Peters, in particular, is playing to his strength; over the past year, the young chef has become besotted with the art of pasta making, going as far as to prepare a pound of pasta each day (in addition to making the pasta for the restaurant’s current menu) in order to better his technique.

“Some dishes will be very classic, and others will be chef-driven. A good menu should be balanced with things you’re familiar with, things that you’ll grow to love and things that will challenge us as chefs,” DeShantz says.

To that end, look for straightforward preparations of well-known dishes such as rigatoni all’ amatriciana, pappardelle with pork ragu and bucatini cacio e pepe, stepped-up versions of other classics, such as the addition of XO sauce to linguine with clams, and more creative offerings such as mafalde with king crab, uni butter, Calabrian chili and citrus parsley crumbs. The menu will also have a selection of crostini, cheese pairings, vegetable-forward small plates and several sharable large-format dishes such as branzino with grilled artichoke, slow-roasted tomatoes, burnt lemon and herbs.

The beverage program will reflect the new culinary focus, including a pasta-friendly wine list put together by sommelier John Wabeck. The cocktail list tilts toward Italy with negroni, Americano and Aperol spritz variations, as well as martinis.

In other Richard DeShantz Restaurant Group news, DeShantz says that his two new restaurant concepts are, despite some delays, moving closer toward opening. Coop de Ville, the casual fried chicken spot housed in a 14,000 square foot Strip District space complete with duck-pin bowling, pool tables, virtual reality golf and other amusements, is expected to open in mid-November and currently is popping up at täkō on Thursdays and Fridays for lunch service. DeShantz says that the interior of gi-gin is ready to go, but he wants to wait until Fish nor Fowl is running comfortably, Coop de Ville is open and täkō is tightened up prior to opening that location; at the moment, he thinks this will happen sometime in late-December. Meanwhile, Ryan Hart, opening chef de cuisine of Poulet Bleu, returns to the restaurant group — he’ll oversee the rehabilitation of täkō’s menu and then move over to gi-gin.

“I’m not trying to reinvent the wheel with any of this. We’re just going to do what we do with a lot of attention to the small details,” DeShantz says.

Fish nor Fowl’s final service of its first incarnation is Aug. 31. Look for the new menu to launch on Sept. 12. The restaurant’s hours will change, too. Starting in September, it’ll be open Tues. through Sat. 6 p.m. to 11 p.m., with a late-night happy hour of pasta plates and wines from 10 p.m. to close.