Beyond the Menu Aims for Thoughtful Conversations on Pittsburgh Food

The food-focused symposium aims to broaden the discussion about the region's food and drink culture.

There is a lot of buzz about Pittsburgh’s restaurant boom, but less dialogue about what’s happening elsewhere in the city’s culinary culture. Beyond the Menu, a series of discussions about the food and drink community, is designed to broaden the conversation.

“There’s been a lot of fanfare about Pittsburgh food and drink culture. Who is benefitting from it?” says Eric Sloss, principal partner of Shift Collaborative and one of the organizers of the series.

“We wanted to create an atmosphere to share ideas. We sought out mix people from inside and outside of Pittsburgh who are innovating ideas,” he says. 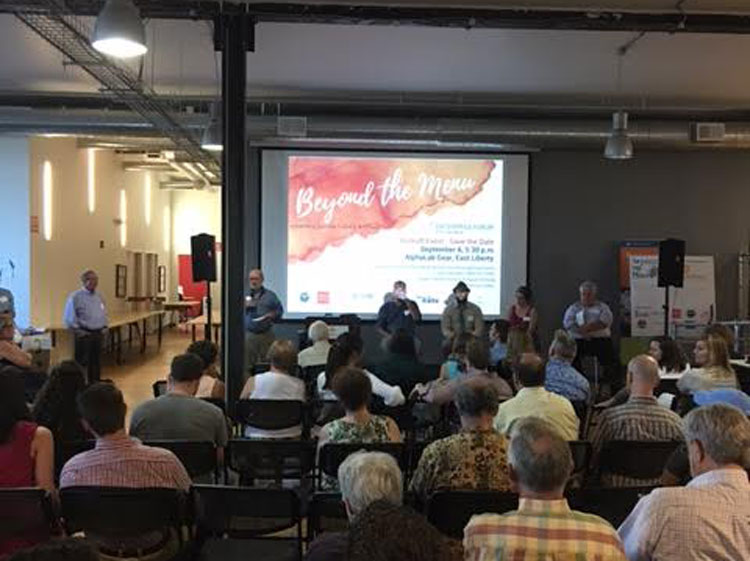 There are a handful more Beyond the Menu events this season, all of which are free to attend. On Saturday, New Sun Rising (a sponsor of the series) previews the Millvale Food Hub, a community-focused food incubator that will host culinary businesses such as Farm Truck Foods, Three Rivers Grown, 4th River Ferments and Steel City Soils.

Later in October, the series will present the launch of First Course, an online platform designed to aid food entrepreneurs in building business skills, and also will participate in a celebration of Pittsburgh Food Day. The initial season of Beyond the Menu will end with Conflict Kitchen’s Dawn Weleski leading a panel discussion on diversity called “Guess Who’s Coming to Dinner?” The panelists for that session still are to be named.

I attended the first couple of Beyond the Menu events and thought the discussions were promising. For example, the kickoff event began with an informative — though nothing groundbreaking if you’re the type of person that follows restaurant culture in Pittsburgh — presentation about how the restaurant scene but later pivoted into a timely, meaningful chat about how to address the workforce shortage in Pittsburgh kitchens and how to make sure that lower-income residents aren’t left out when restaurants move into their neighborhoods.

“I hope this generates a conversation. I hope the dialogue that’s happening here is accessible to everyone,” Sloss says.

This article appears in the October 2016 issue of Eat Street.
Categories: PGHeats