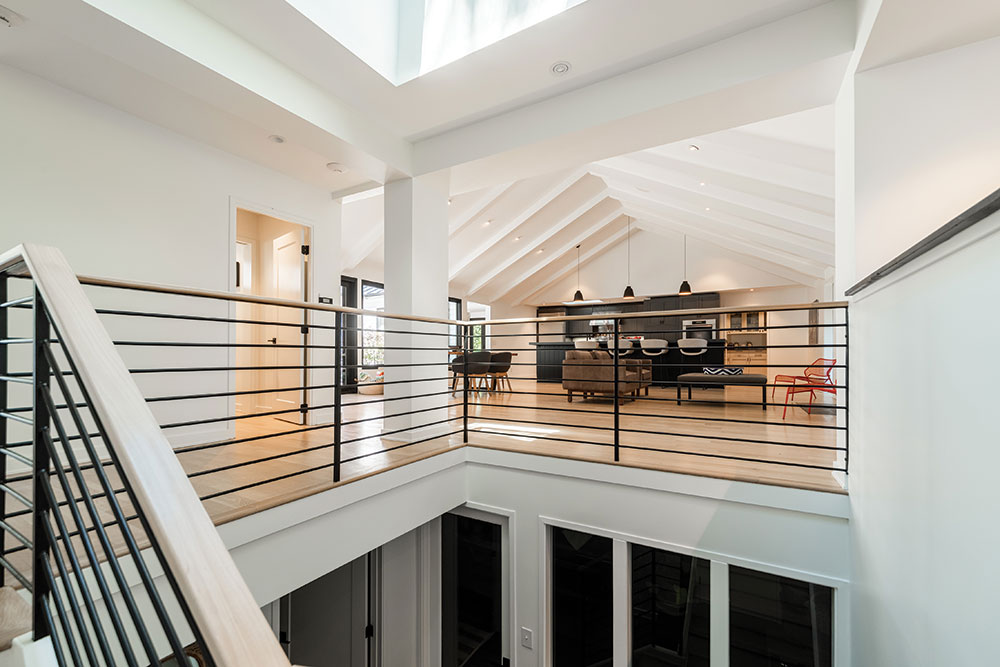 The property in Fox Chapel had a lot going for it: an open-concept living area, enough windows to brighten a gray Pittsburgh day, a collection of mature trees and a relaxed, cozy ambiance — but there was one problem.

The house had a single functional bedroom and the client needed three.

“There was a lot of potential in the house, and we tried to extract as much of that potential as we could from it,” Lloyd says.

According to this year’s Best of Design judges, they accomplished just that. The team won the title of Best Renovated Home Interior for their efforts.

“I really like the crispness and balance of the interior,” says Judge Carissa Smith of Cleveland’s AoDK Architecture.

Balance was a concept the team strived for since the inception of the project.

The Edge Wood House, as mossArchitects came to call it, was built in 1952 and had been renovated several times over the years, resulting in an uneven, disjointed layout. The team’s first project was to fix the flow, particularly the awkward, diagonal sequence from the foyer into the heart of the home. They simplified entry points and created logical pathways and sight lines to interior and exterior spaces. 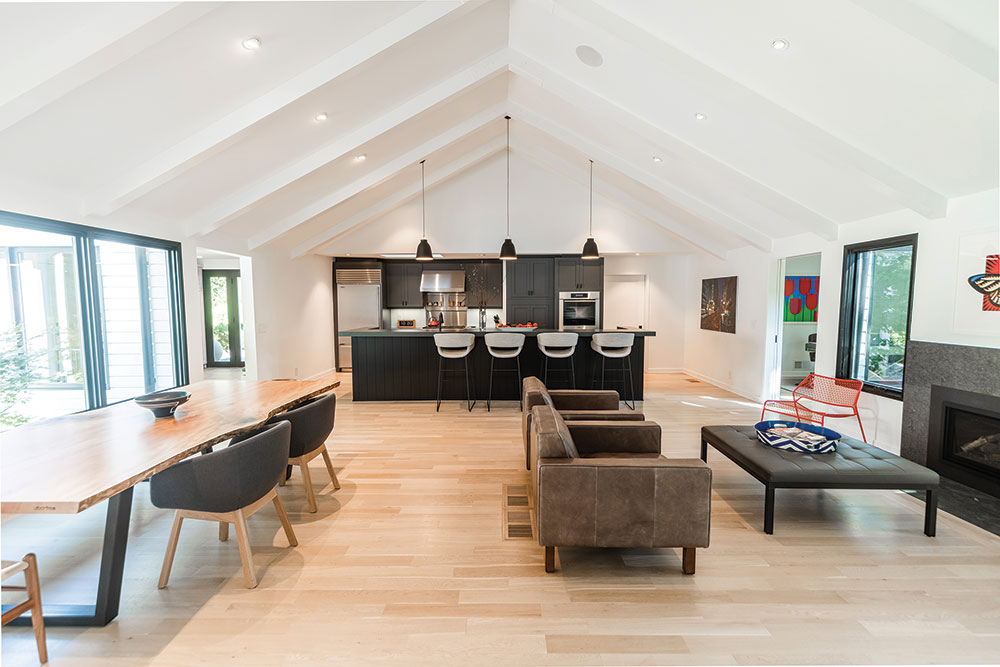 Then there was the matter of the living area. The kitchen, living room, dining room and sunroom already had an open-concept design, but it wasn’t a particularly welcoming space because of the exposed roof trusses. The team reinforced and modified the existing roof trusses, vaulted the ceilings and painted them bright white. The result was an airy gathering space for the family.

The largest undertaking, though, was the addition of the twin bedroom wings.

“We wanted to enhance the house, not overwhelm it with the addition of suites,” Foster says. “So, we really tried to mimic the style of the original house.” 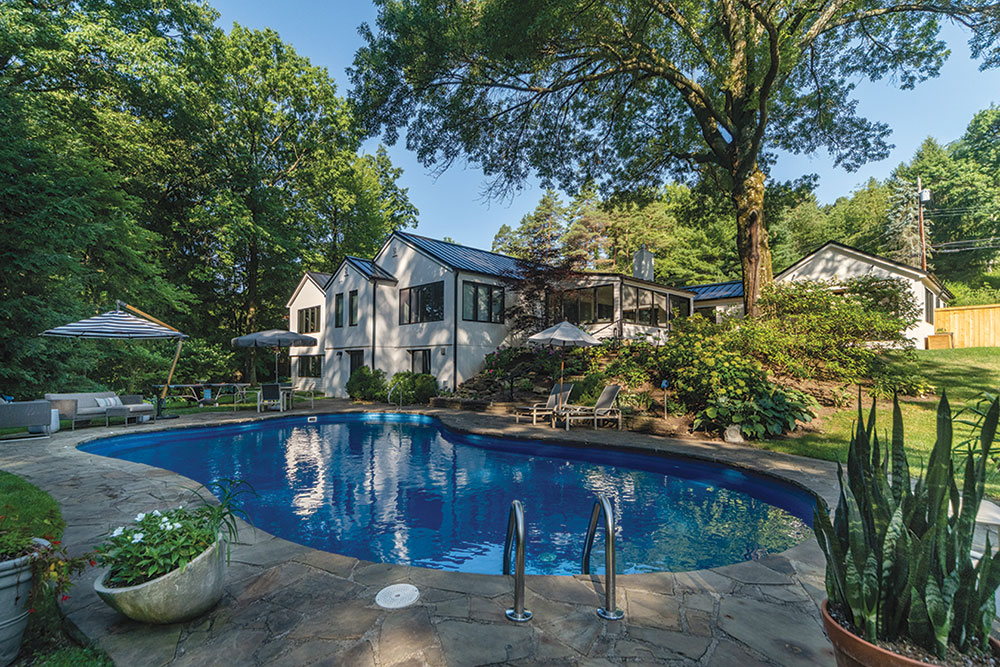 On the exterior, that was accomplished by covering the entire home with a standing-seam metal roof and creating two serene courtyards that are visible from the interior. On the inside, new hallways not only connect the original home to the additions but also offer function and storage by housing an office, laundry room and linen closet.

In a further effort to marry the old and new spaces, the team used the client’s preferred black-and-white color palette throughout the home, in some places playing up the stark contrast — as they did with black window frames against the white walls — and in other places softening the dichotomy with warm wood tones.

They also refinished, rather than replaced, many of the home’s existing elements. The original hardwood floors got a light, almost whitewashed, treatment, and the kitchen cabinets and island were reborn with a sleek, black finish that pops against white walls. They even repurposed some of the home’s old millwork to make a custom console. 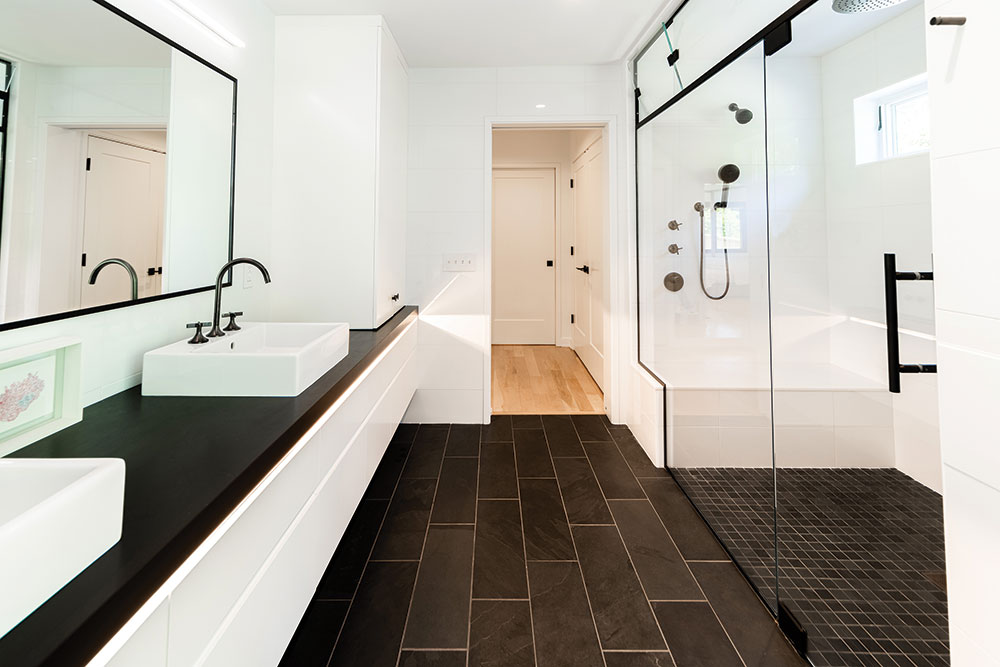 But the team agrees that the black-and-white bathroom, with its floating countertops, oversized walk-in shower and slate floor, is a true standout.

“It sounds funny to say it, but I do love my bathroom; it’s the nicest bathroom I’ve ever been in,” says the homeowner, who has asked to remain anonymous. “Really, I love it all. I never thought I could love a house so much.”

She visited, and dismissed, 20 homes before she bought the property in Fox Chapel. Though she was nervous about the renovation process, she was determined to get the home she envisioned. As the mother of two teenagers, she wanted a design that was just big enough to give each family member the privacy they needed, but also offer inviting common areas for them to spend time together. The team at mossArchitects understood and embraced that vision from the very beginning, she says. In the end, they delivered just what she wanted—a bright, airy home with intimate spaces.

The master bath and finished basement are prime examples. The bedroom is situated at one end of the home, and its sliding glass doors that open to a private courtyard make it feel like an oasis, yet it’s only steps from the kitchen. The basement functions as a teenage hideaway, but also walks right out into the family’s backyard with its kidney-shaped, inground pool. 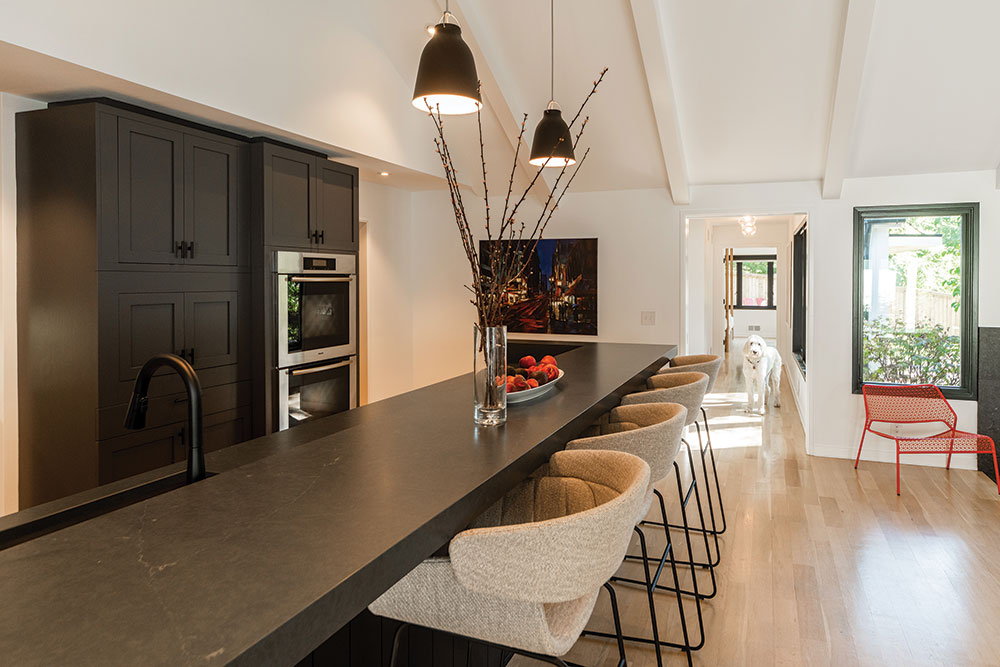 “It was just a great project,” Foster says. “She was a fabulous client with a beautiful design aesthetic.”

The homeowner had equally laudable words for what she dubbed her “dream team.”

“I had never been through the renovation process before, but they were so patient with me and really understood my vision,” she says. “I don’t know whether it was because we’re all about the same age or I just happened to fit in with them, but I was so sad when the project was over because I miss them.”