Infinity Custom Homes created a zen space that combines a rustic resort with a luxury spa. 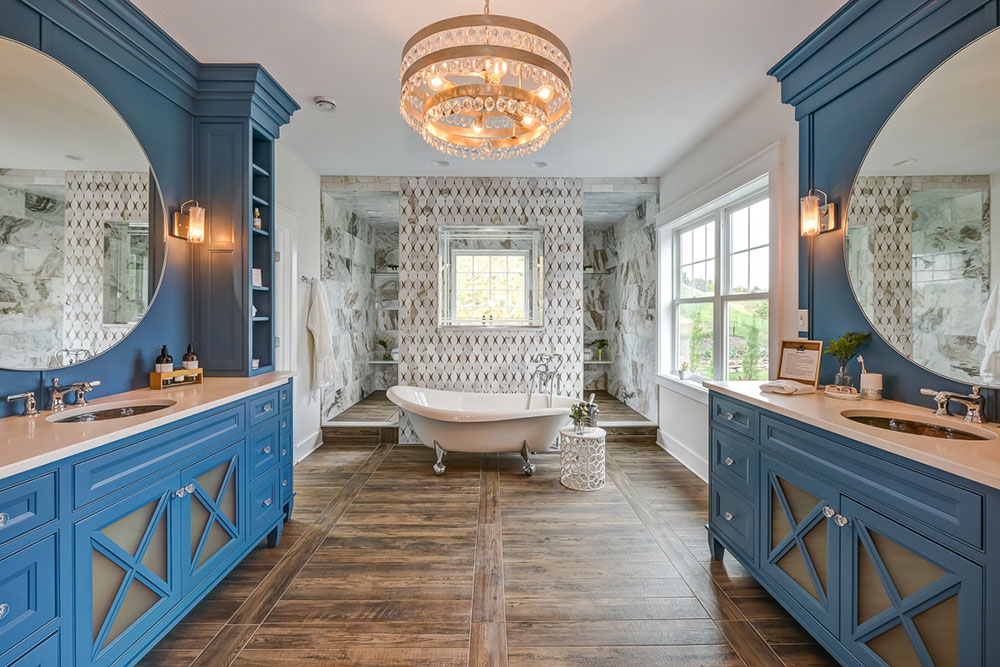 Jill Pearsall is a firm believer that every home should have at least one “moment”— a space that sets it apart and lets you feel as though you’ve left the stress of the world behind.

The primary bathroom she created for a former Infinity Custom Homes model in Pine Township, this year’s Best New Bathroom winner, was designed to transport the homeowner to a place that’s both rustic and glamorous.

“They’re supposed to be retreats, so we always set out to make it a special place, something that you know is relaxing, calm, a place of zen,” says Pearsall, design consultant with Infinity Custom Homes.

For this serene space, Pearsall worked from the floor up. She knew she wanted the wood plank porcelain flooring to be perfectly symmetrical, a design element not easily achieved in most bathrooms. The dimensions of the room allowed for a perfect line down the center, drawing the eye in and straight back to the Kohler clawfoot tub and to the walk-in shower. 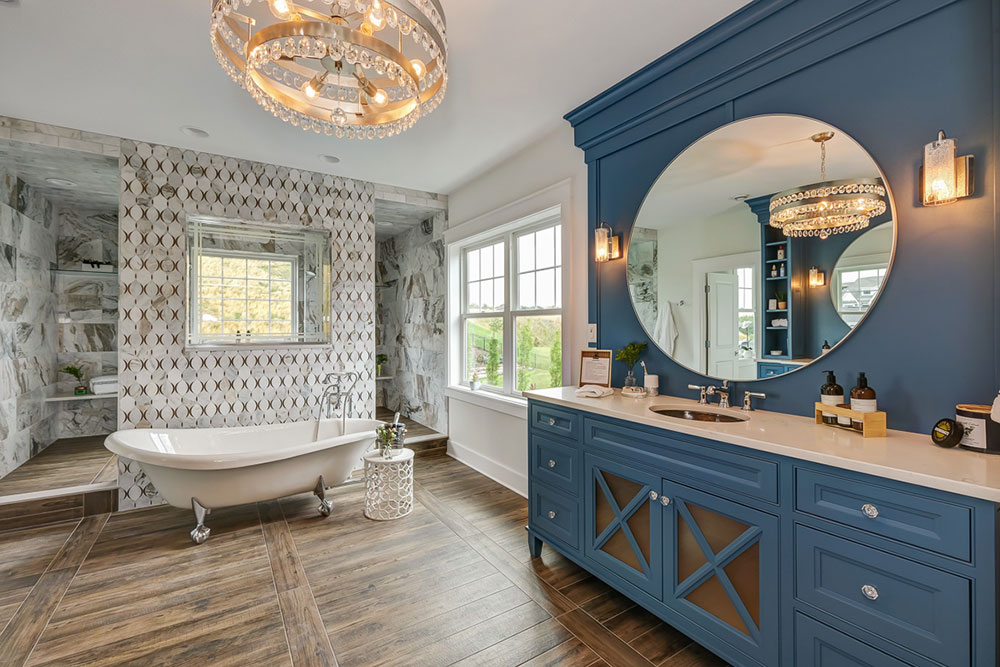 The his-and-her vanities on opposite walls are in Yorktowne’s Lakeshore, a soothing aquatic blue hue chosen for its calming effect.

“I was drawn to the use of the bright shade of blue in the cabinetry for an unexpected pop in the space,” says judge Stephanie Schill Hayden of Cleveland’s Schill Architecture. “The fun hue is toned down by the warm flooring and makes for a playful yet sophisticated space.”

Overhead, the round, tiered crystal chandelier dazzles while simultaneously offering softness in the space. 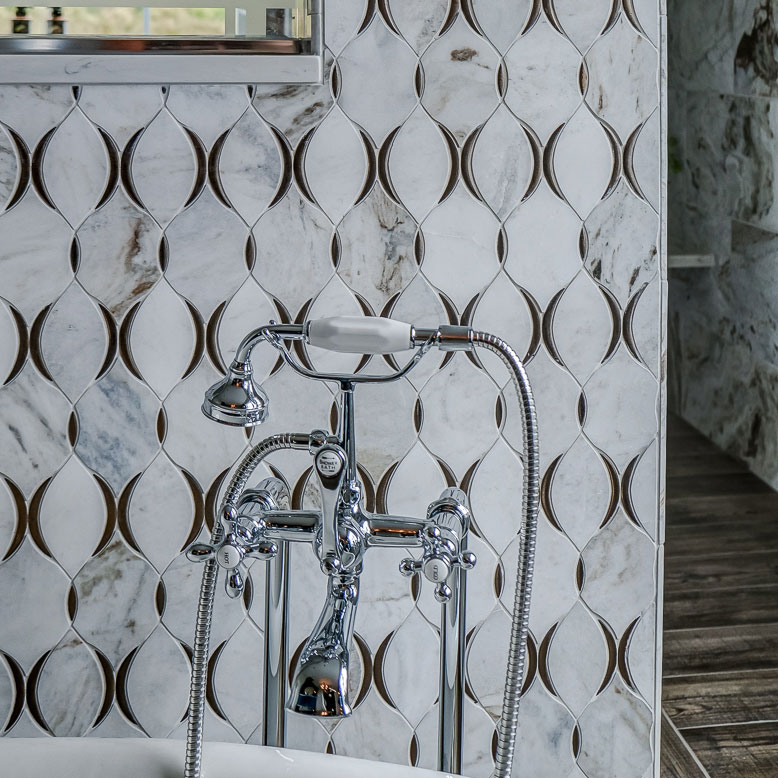 The touch of drama continues behind the tub, where American Olean tile in a striking geometric pattern covers the wall partitioning off the expansive wet space. The wall also features a custom glass partition that draws the eye to the outside via a window on the exterior rear wall of the double shower.

“You have to have the right lot to put a window in the back of your shower like that,” says Pearsall. “But it loses it a little bit if you then can’t see the whole way through. This was a way to be able to see picture window to picture window, keep the sight line open, but at the same time, provide a little more privacy and keep the warmth in.” 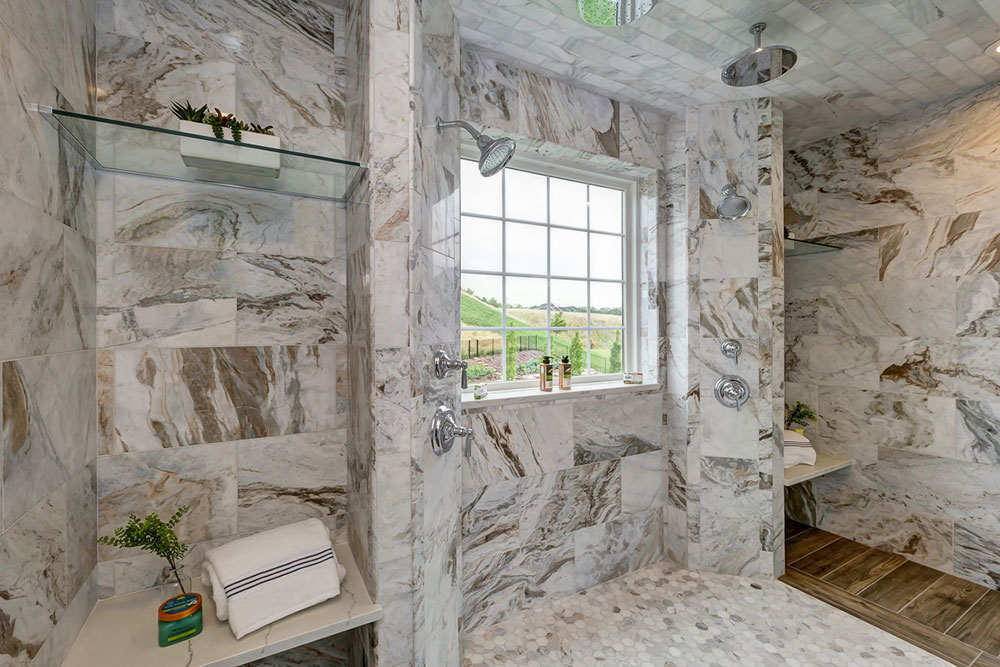 The four shower heads are positioned in such a way that the person showering is not entirely visible to the rest of the room. To the left and right of the shower are sitting areas perfect for holding towels or sitting to shave.

The entire space uses the same line of heavily veined American Olean natural stone tile, from the wide rectangle pattern on the wall to the brick of the ceiling and a mosaic on the floor.

“When you have a space that big and a tile with that much movement in it, staying within the same line and just allowing the magnificence of that piece to speak is all you need,” says Pearsall. 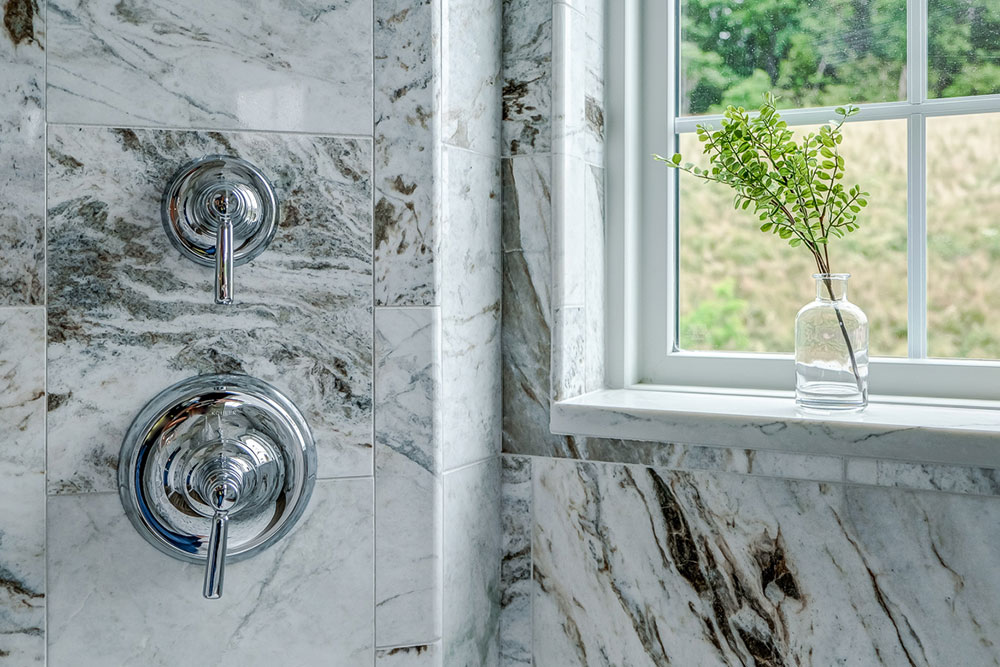