Justin Cipriani took advantage of a steep lot to design a modern, organic home that blends in with the hillside. 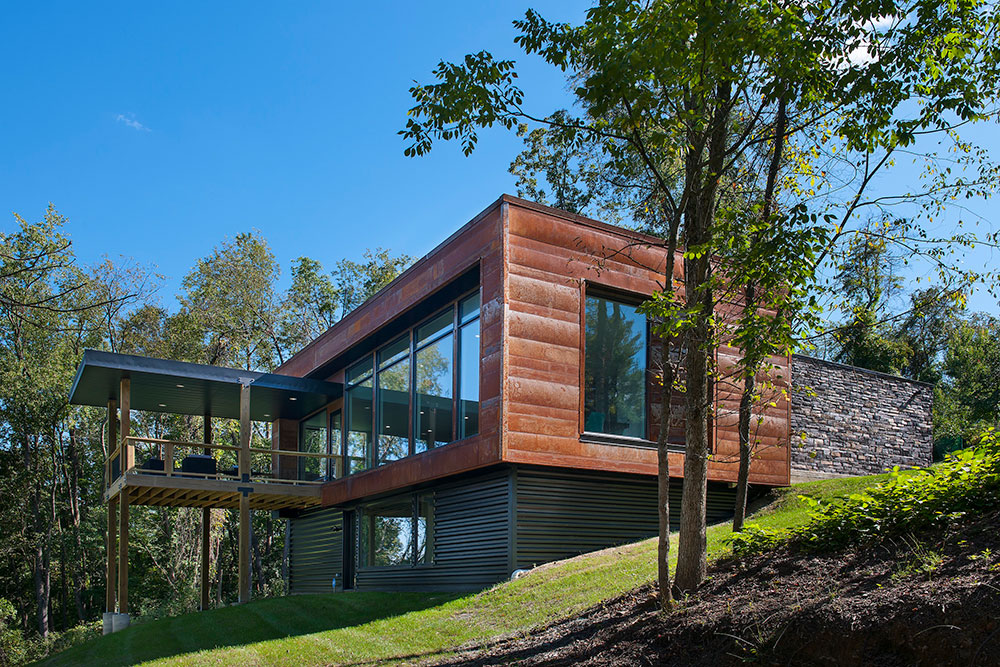 The sloping, wooded lot in Upper St. Clair had already been on the market for a while when Justin Cipriani noticed it. The Pittsburgh native had previously spent a decade living on the West Coast, where he honed a modern design aesthetic and a knack for building one-of-a-kind homes on less-than-ideal plots.

So, the steep grade of the Upper St. Clair lot didn’t faze him. In fact, it looked like a good challenge for his Cipriani Studios. He purchased the land, designed a kind of modern treehouse to tuck into the hillside and posted the rendering online to entice buyers.

That’s where Rob Michelucci and Kevin Williams spotted it in 2020. The Pittsburgh natives were ready to return to their Western Pennsylvania roots, but after 10 years of living in modern apartment buildings in Washington, D.C., and Florida, they weren’t looking for just any house. 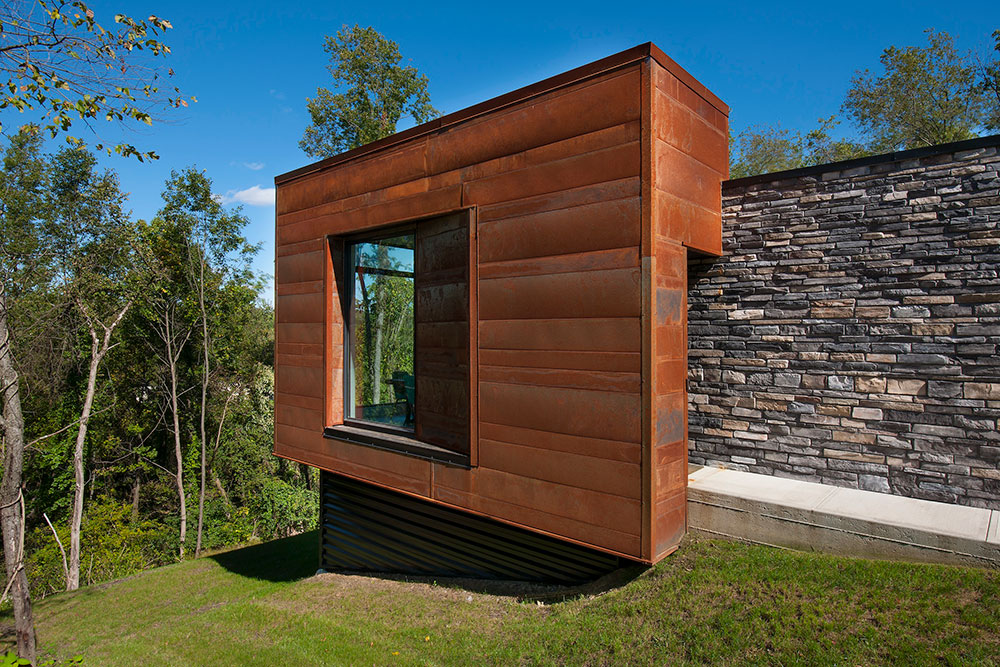 “I really like the juxtaposition of materials on the exterior of the home,” says judge Stephanie Schill Hayden of Schill Architecture in Cleveland. 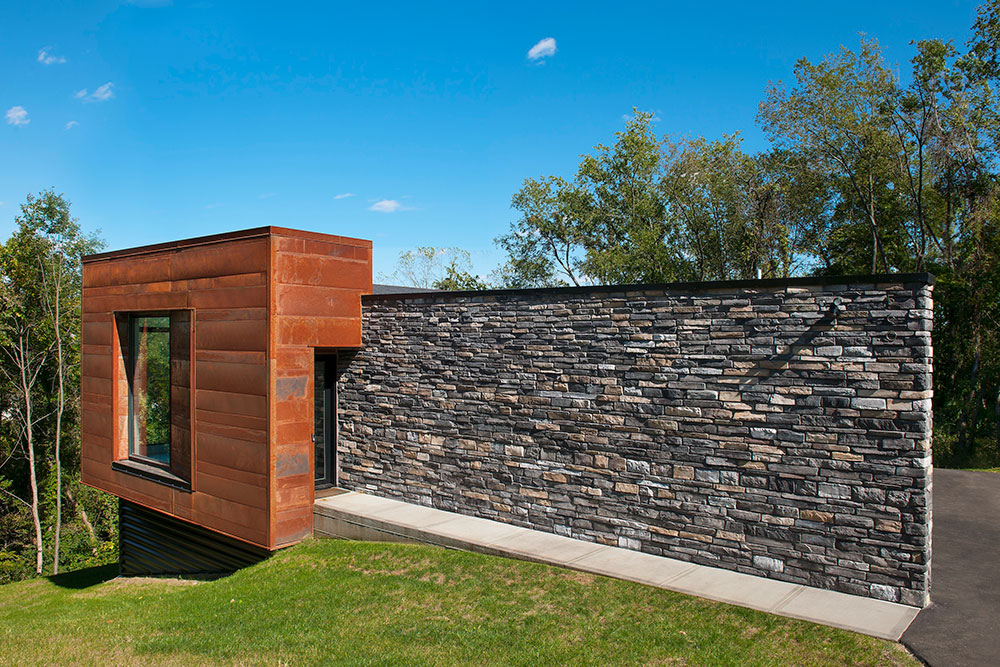 The home’s approach is purposefully unassuming. Situated at an angle to the street is an oversized stone veneer wall that cleverly conceals much of the 2,800-square-foot structure behind it — including the gutters, roof and garage — but you do get a peek at what appears to be an orange box floating amid the trees.

That’s the corten steel top floor overhanging its corrugated steel foundation; it gives anyone standing at its bank of floor-to-ceiling windows the feeling of sitting in the treetops. Corten is a metal that arrives on site a shimmering silver but, with time and weather, rusts to a terracotta-colored finish. Or, as Cipriani likes to say, “it will age with the trees.” He hung it in a pattern of variable sizes to give it a more organic feel. 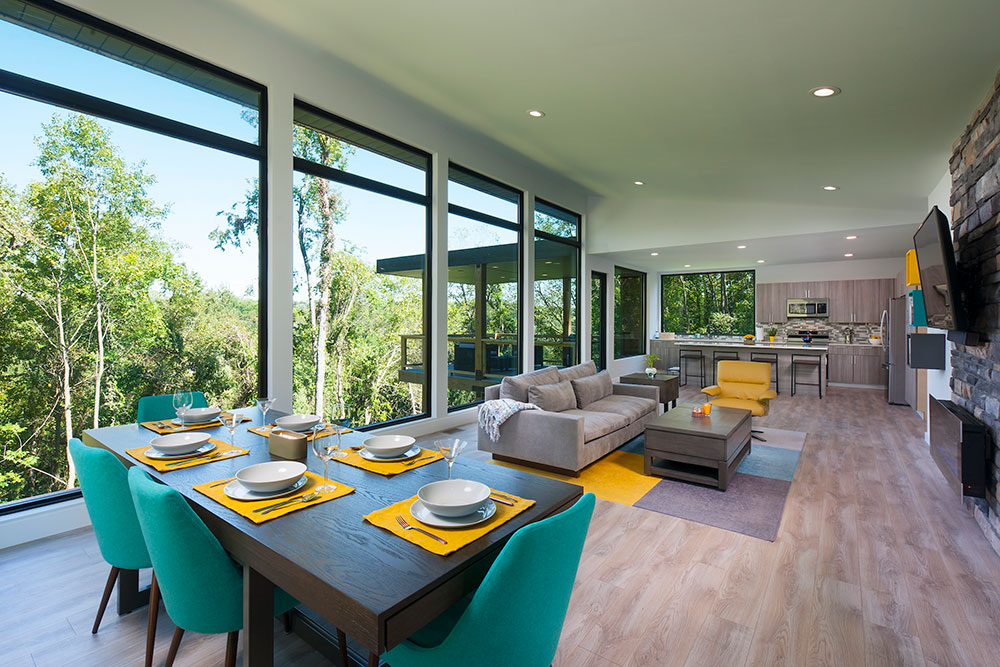 The windows that run the length of the top floor are off-the-shelf, 5-by-10-foot frames that Cipriani uses to achieve maximum effect at a homebuyer-friendly price. They flood the 20-by-40 square-foot great room in light, offering sweeping views of the changing seasons and wandering wildlife, and open to a 12-by-16 square-foot timber-frame and steel-bracket deck.

“The large and expansive glass offered a great visual connection between the interior and scenic surroundings,” Hayden says.

They also had the added benefit of making the COVID-19 lockdown and dreary winters a lot less depressing, according to Michelucci and Williams.

More oversized windows adorn the top floor’s master suite and the ground floor’s spacious living area, allowing light into the cave-like quarters, which are nestled right into the hillside. 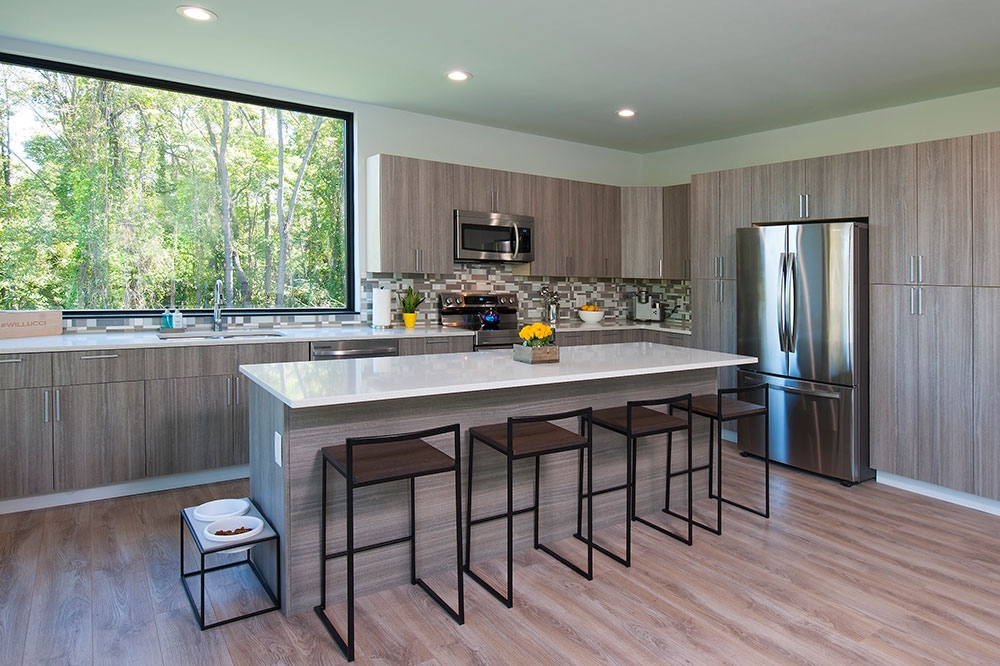 Achieving the stacked, treehouse construction wasn’t a simple feat. The lot ended up being even steeper than it appeared. The crew had to move a lot of earth, and Cipriani had to shift the home’s orientation slightly, to make it work.

“It was like a National Geographic moment,” Cipriani says. “I was waiting for David Attenborough to start talking about taking down nature.”

But he’s thrilled with the outcome — a design that, though unique to the area, still suits it, blending seamlessly into the nature around it. It’s a refreshing alternative to the traditional “Pittsburgh home,” according to Cipriani. 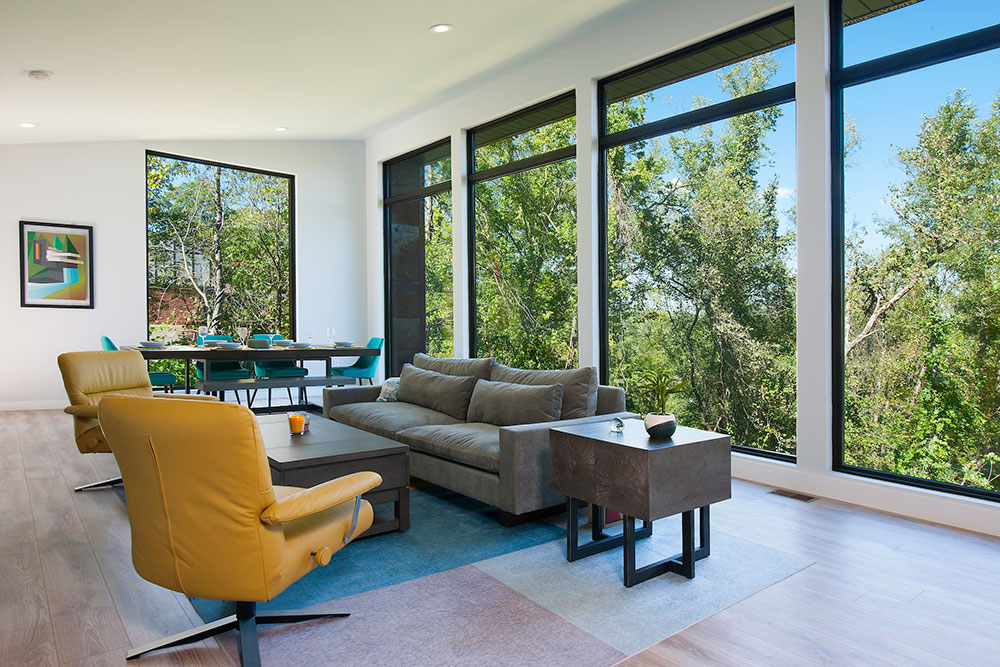 “Modern doesn’t have to be scary,” he says. “Building a modern home in a suburb is sort of progressive, but Rob and Kevin are progressive guys, and they took a leap of faith. They took a chance and they won.”

Or, if you ask Michelucci, they were destined for this house. Just a few months after moving in, he rediscovered a souvenir from one of the couple’s many trips to Disney World. On that particular visit, they rode Epcot’s Spaceship Earth, which at the end spits out a photographic prediction of the rider’s future. For Michelucci and Williams, it was a house.

“And …” Michelucci says, pausing for effect as Williams grins, “it looked just like this one!”

This article appears in the April 2022 issue of Pittsburgh Magazine.
Categories: Best of Design