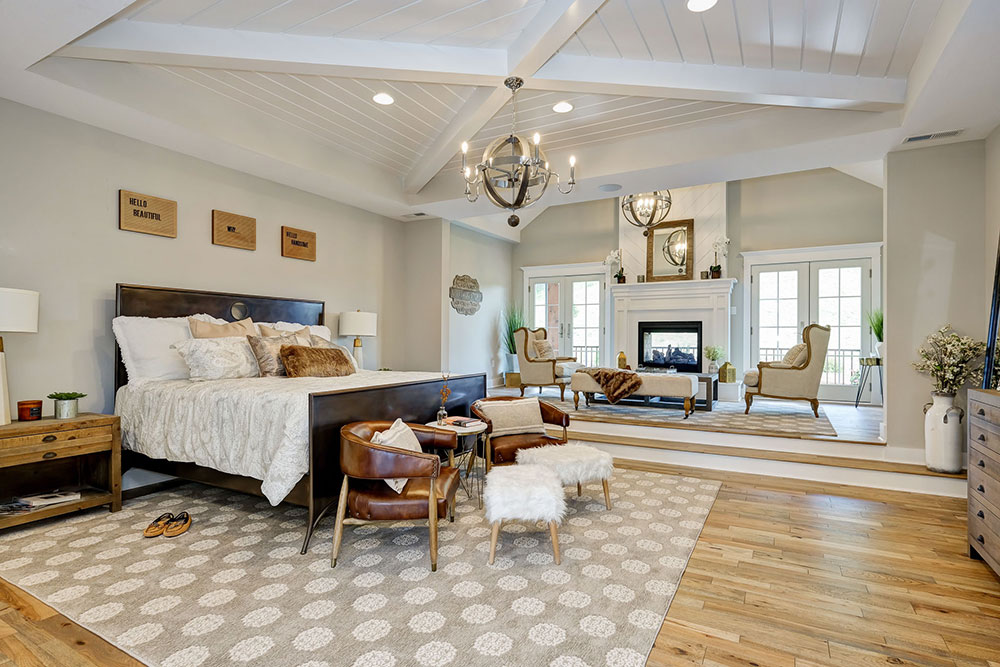 Jill Pearsall loves incorporating messaging into her designs through eye-catching artwork, bold decals and strategically-placed signs. One in particular that has appeared in many of the models the design consultant has worked on for Infinity Custom Homes reads, “My goal is to create a life I don’t need a vacation from.”

This year’s 2020 Best New Home: Interior Design winner can be found in the Sunset Ridge plan in Pine Township. With its refined luxury articulated through Old World influences and spa-worthy details, it’s a place few would ever want to leave.

“This house, this retreat, is a vacation in and of itself,” says Pearsall.

Judge Crystal DeCastro Knapik, a project designer with Vocon in Cleveland, says the amount of detail and thought that went into each interior space of the home made it a winner. 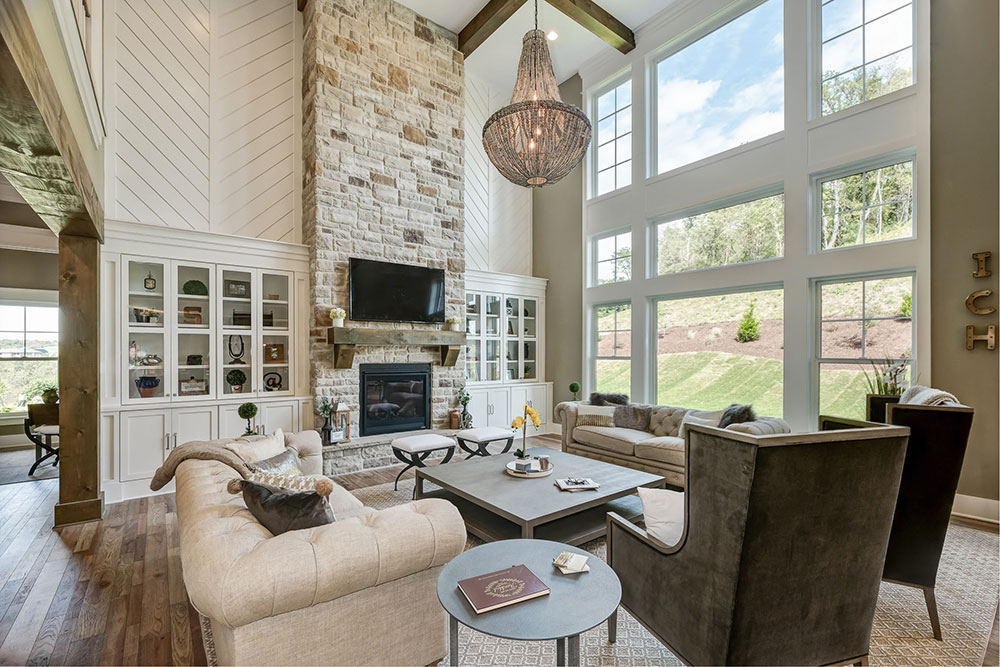 “I love the interconnected spaces that are clearly defined, yet still flow freely into the next,” she says. “With plenty of clean white textures, warm grays, and light woods, each space feels so pleasantly airy.

The model home’s English Tudor aesthetic grew from the ground up, Pearsall says, with the brick-look tile and hardwood inlays of the entryway, study and dining area creating a lived-in, timeless feel. Dramatic wooden beams and a herringbone wall feature in the dining area add to the effect, while an open-work pendant light fixture allows the eye to pass through to the details beyond. 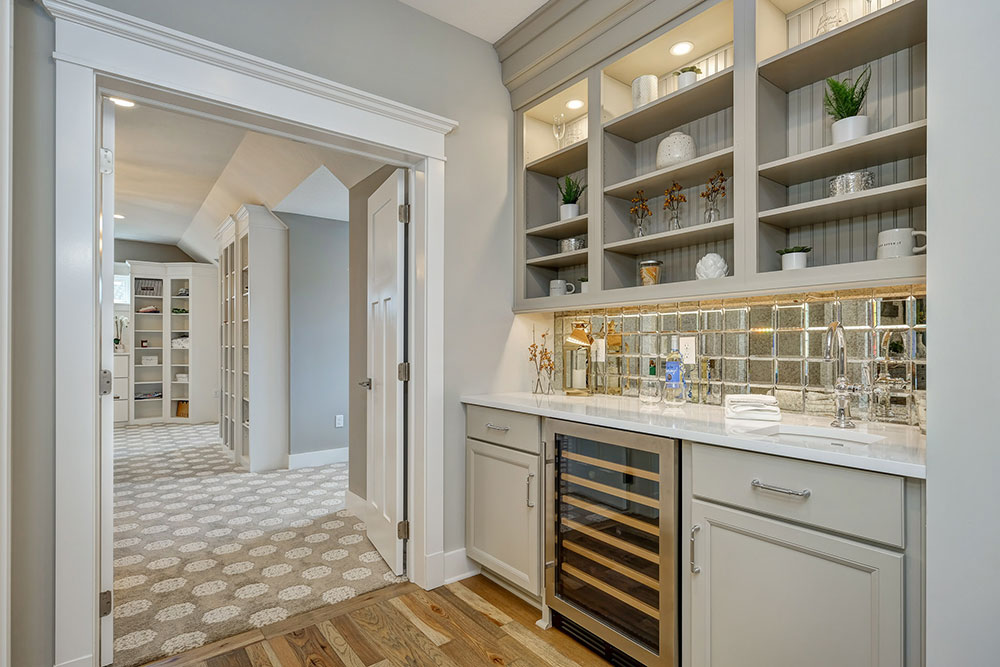 “You can’t do too much in any one given space, so the idea is you see through that to the other things that are happening while still adding the depth that needed to be in the room,” Pearsall says.

A glass-enclosed shelving unit in the entryway displays a wine collection that could be swapped out for anything the family wants to showcase, from trophies to photos to seasonal decor.

“It’s a chance to speak to who you are when you walk in a space that otherwise could be underutilized,” Pearsall says.

“This space is huge with how high the ceilings are. It called for something that was going to speak. This needed something that had volume,” Pearsall says. 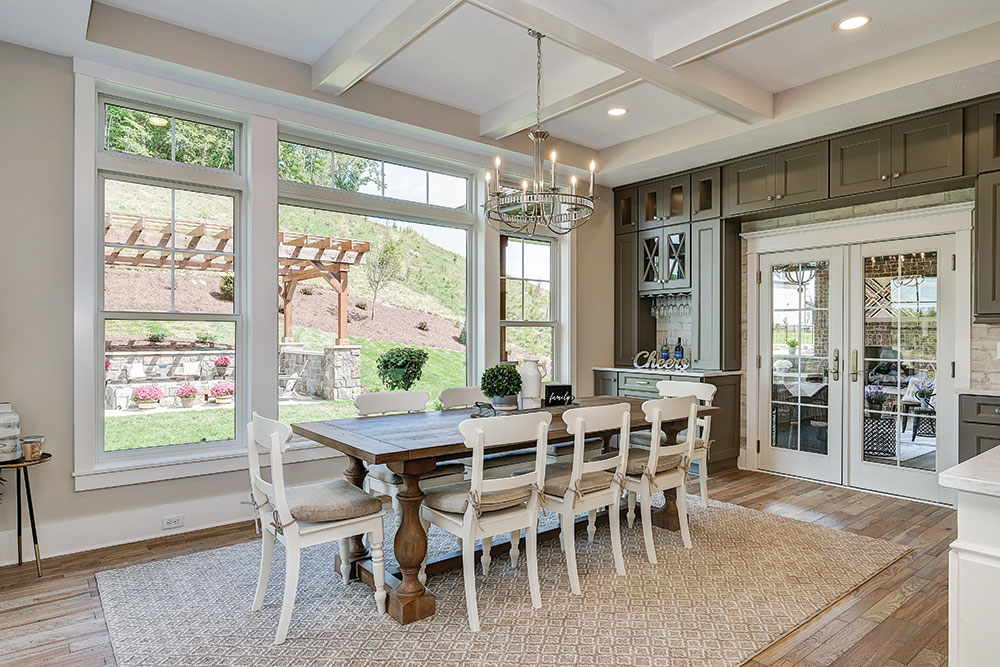 The towering stone fireplace employs an unconventional technique to add an element of calm to the space. Here, the mortar makes all the difference, Pearsall says. Whereas Americans tend to rely on gray mortar that accentuates every joint, European mortar often blends in more because of both its color and its age. Using a white sand mortar resulted in a natural, soothing effect room inhabitants likely feel even if they can’t quite put their finger on why.

“I don’t think people realize how much the mortar you pick to go with the stone you pick makes a huge difference,” Pearsall says.

Also making an important difference for many busy families is the mudroom, which in this model features a dropzone, second refrigerator and even a dog washing station, all tucked away behind a closed door around the corner from the kitchen. Some homeowners opt to also include a desk to serve as a catchall for mail or homework, keeping unnecessary clutter out of the kitchen. 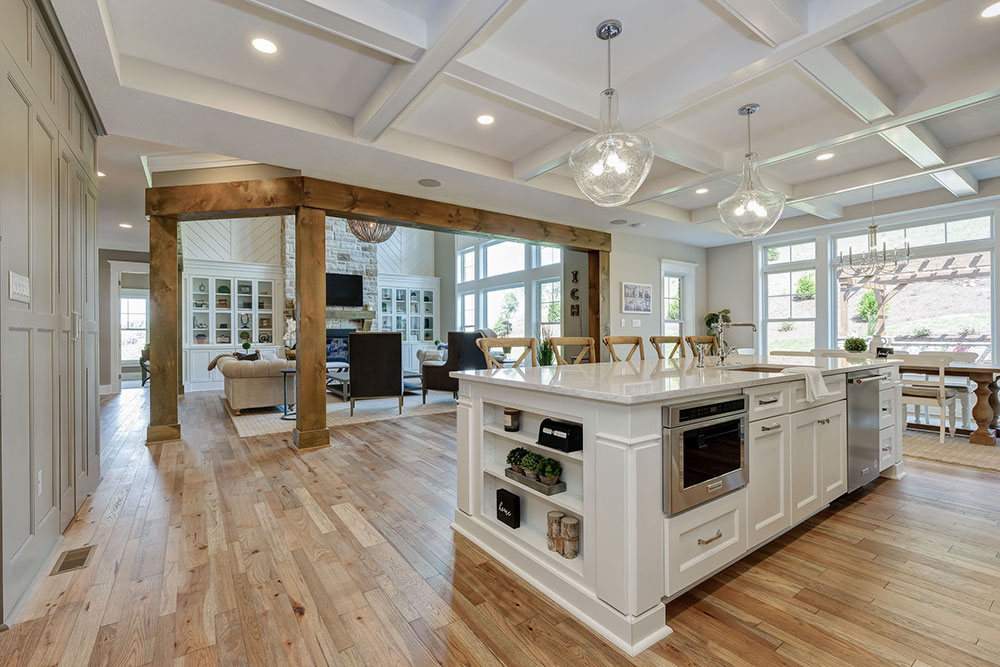 “The dropzone doesn’t have to be part of your kitchen or part of when you walk in,” says Pearsall. “It really can be a space that is separate.”

The second floor is home to the spectacular master suite with its king-size bed, multiple sitting areas, built-in bar and see-through fireplace offering views of the outdoor seating space and landscaping beyond.

“Truly the word for this is ‘retreat,’” says Pearsall. “You can close the doors and not leave.”

Pearsall gave each space within the vast room definition and division through the use of area rugs and continued the lived-in European look with distressed wood pieces and antique-style artwork displaying French messaging. As it does throughout the home, greenery placed atop counters, along shelves and tucked into corners adds a touch of serenity.

“The best way to bring life into a space is to add little pops of flowers and greens,” says Pearsall. “Any time you can bring what’s reflective of nature into a space, it just makes it feel more harmonious and there’s a peacefulness that comes with it.” 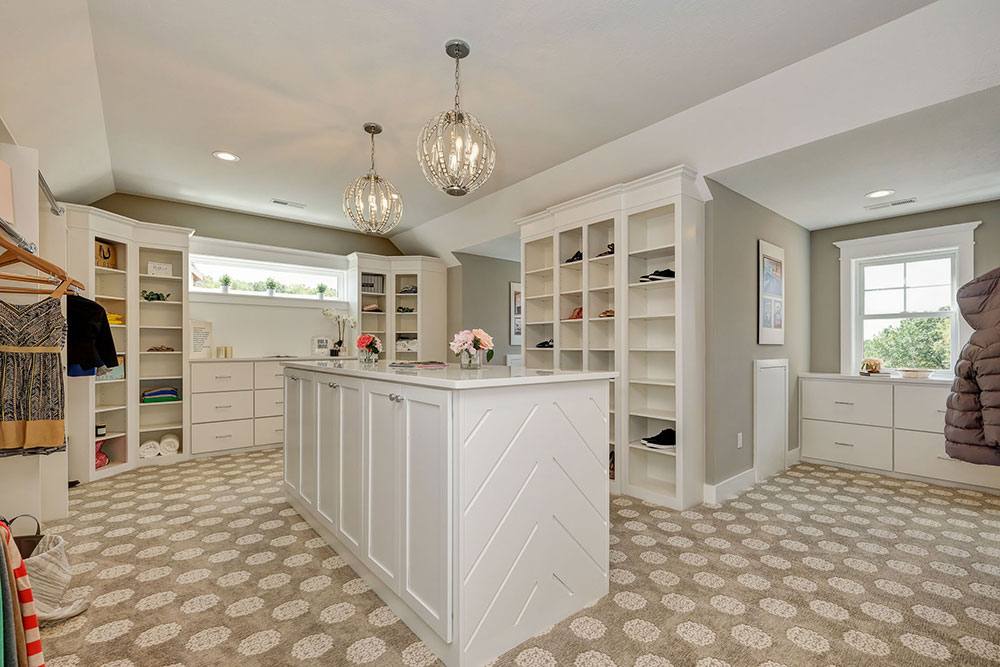 In keeping with a trend Pearsall is seeing across the design industry, the model’s massive master closet was given just as much attention as any other room of the house and features a mix of open and closed shelving, natural light and an elegant chandelier of geometric cut crystal.

Pearsall used more inspirational messaging here with small signs encouraging homeowners to be “Bold, Brave, Beautiful” or “Believe in the Strength Provided by Family and Friendship” to set the tone for beginning and ending each day.

“I do feel that subliminally when you see and hear those things, they do make you what you are,” Pearsall says. “I do think those moments remind people that we’re all people and to be kind to each other.” 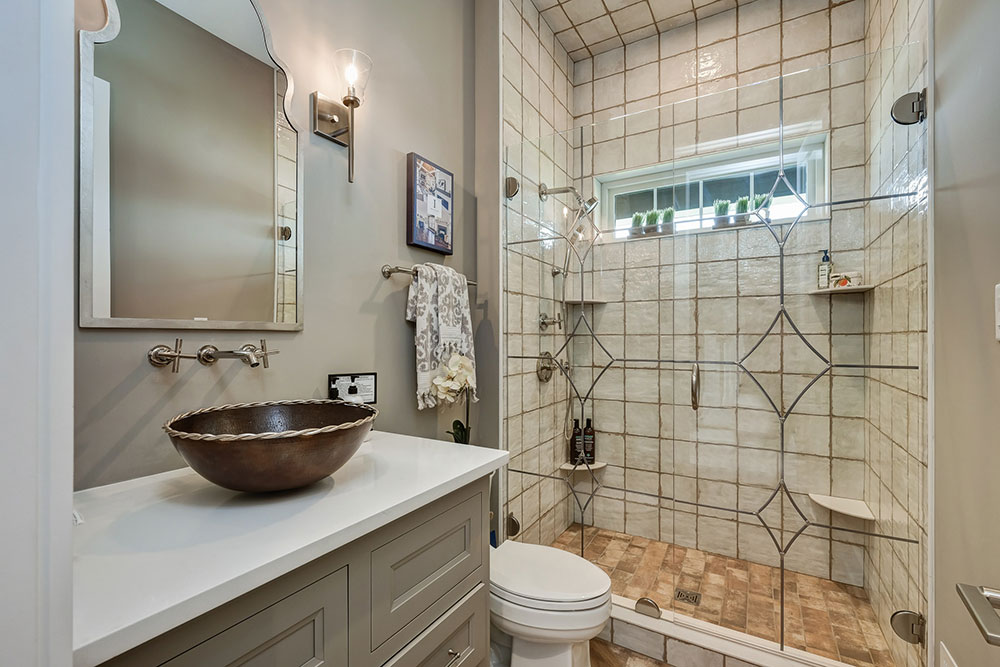 The master bath would be at home in any spa with its subdued Irish creme paint, antiqued mirror tile, clawfoot tub and arched shower door.

“Anytime you round anything — glass, trim, archway, anything — it’s more expensive but that’s the way everything is in Europe,” Pearsall says. “Anything that’s been around a long time, people took a lot of pride in that and that meant it took more time and that’s what was my inspiration here.” 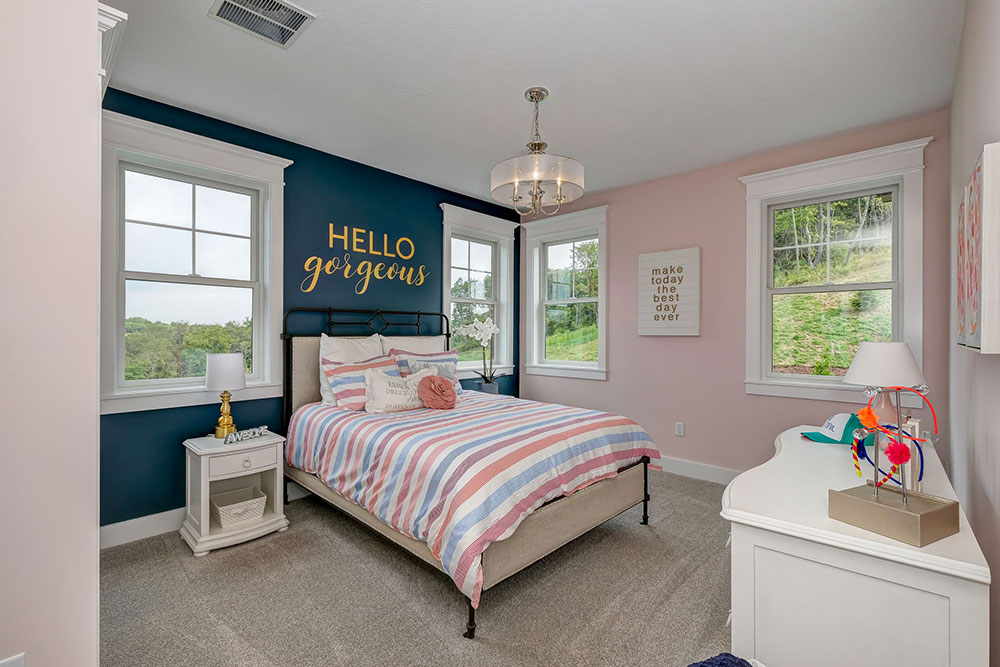 Jack-and-Jill bedrooms were designed to reflect the style of possible residents and feature whimsical decals of stars and butterflies, light rose and deep navy wall hues, and the words “Hello, Gorgeous” scrawled above one headboard.

The third floor features an extra-cozy seating spot and a separate workout area. But the real fun is tucked away around the corner, where a hidden set of bunk beds and small video game room create the perfect treehouse-like hang out spot.

“We strive to make each of the models we do different,” says Pearsall. “I want three or four things in every house to be your takeaways from that house. Whatever it is, you need those moments in a house that grab you and make it different than what everybody else does.” 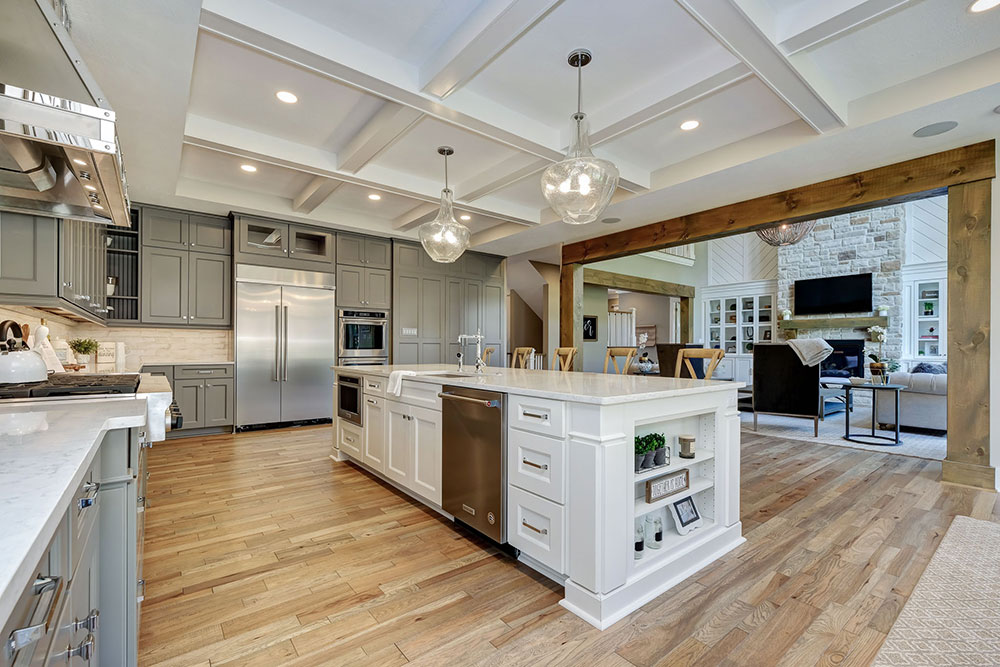 Judges were equally impressed by the model’s expansive eatery, naming it their choice for Best New Kitchen.

Transitioning from the two-story ceiling height of the great room to the much lower adjacent kitchen in an open-concept layout called for some creativity, and the results are seamlessly stunning.

The coffered kitchen ceiling adds definition and visual interest while still allowing the focus to remain on the eye-catching cabinetry.

Centering it all was key to making the transition, Pearsall says. “There were many dry runs on the ceiling with chalk to get it right,” she says. 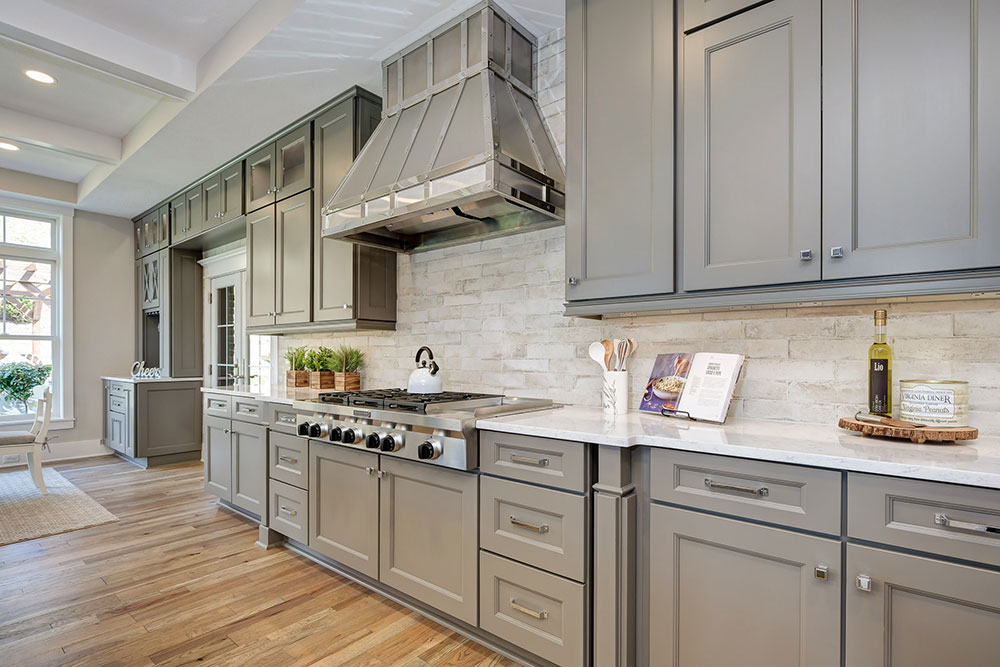 The cabinetry’s color — Yorktowne’s Frappe — is distinct yet versatile as it tends to pull the tone of the others it abuts.

“It’s one of those colors that if it’s closer to a gray, it’s going to look more gray. If you put it closer to the taupe-y colors, it’s going to pull more of that taupe-y color,” says Pearsall. “It looks different in every light. It’s a fantastic color that allows you to add warmth or cool to whichever space you want to do.” 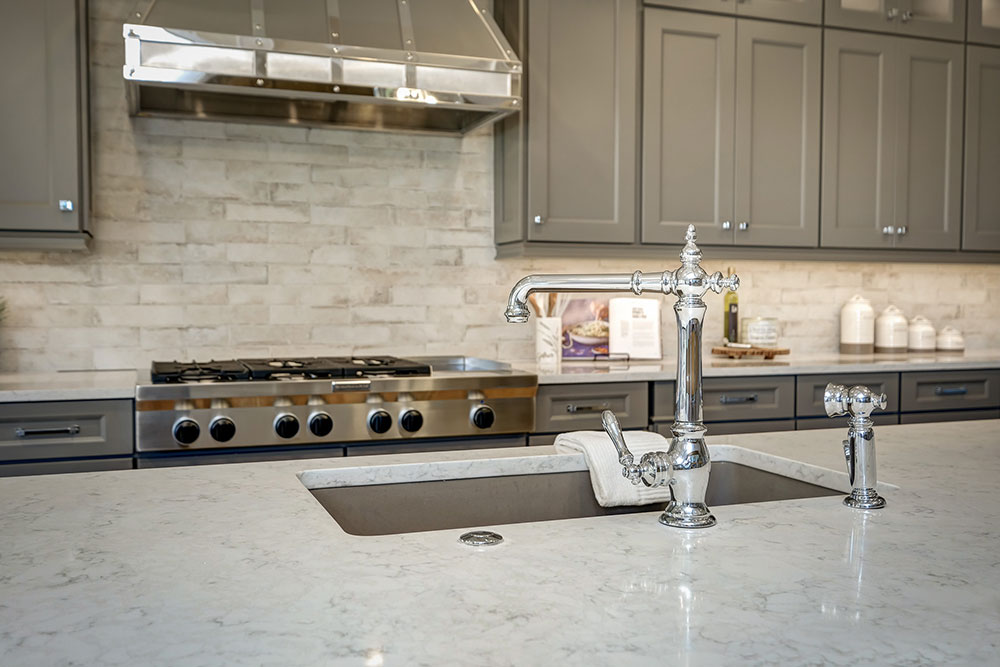 Pearsall opted to do both, adding warmth with the softness of the hickory floor and cool with the gray of the quartz countertop.

Sunrise Metal created the custom hood to match the cooktop, its chrome introducing a touch of a refined industrial aesthetic.

The abundance of cabinet storage allows for a dedicated beverage center to one side, and glass uppers can afford to be decorative or house seasonal items not used every day. Hand-blown glass light fixtures hang above the 11-foot island with drop sink and seating for at least four.

Some choices were made to blend in rather than stand out. The clean lines of a hidden pantry door give the illusion the space is simply an extension of the cabinetry. The offset porcelain brick-style tile of the backsplash continues the Old World style.

“Sometimes when I do a kitchen, [the backsplash] is meant to be the pop,” says Pearsall. “For here, it was meant to look like it’s always been here.” 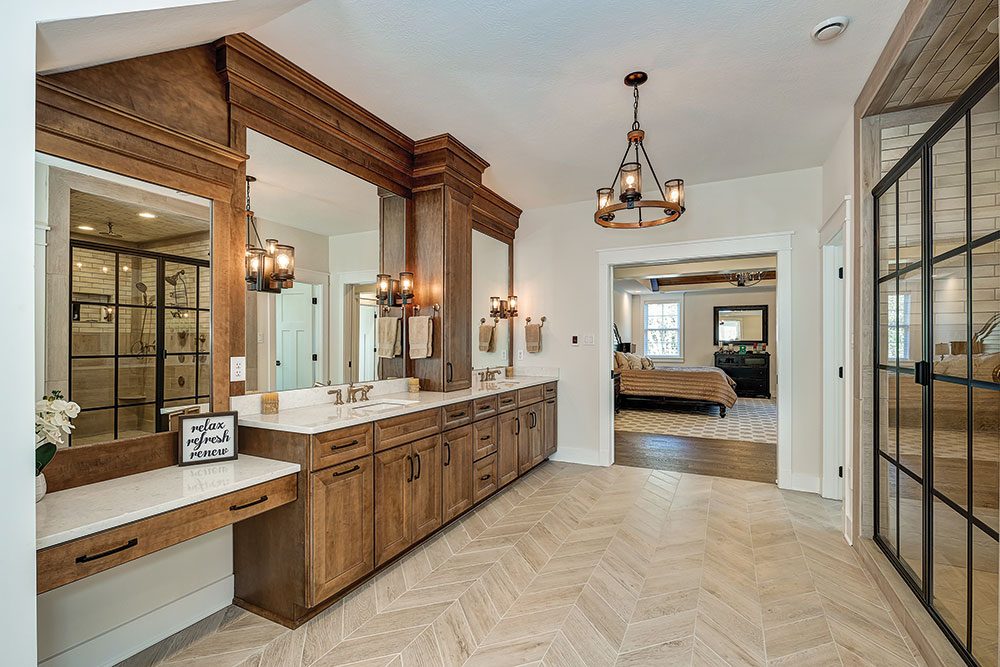 Judges also loved the zen-like master bathroom found in another newly built Infinity home — this one in Mars — and named it their pick for Best New Bathroom.

To homeowner Jodi Brennan, spas, where the design reflects nature, are some of her favorite spots to decompress

So when creating the ensuite bathroom, she aimed to emulate the effect.

“Now if I could just get a masseuse in here,” she says with a laugh. 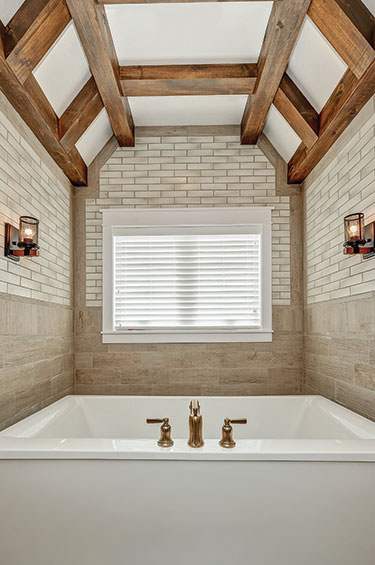 Brennan, Infinity’s sales manager and selections coordinator, who also is married to the company’s vice president, Liam Brennan, wanted the space to inspire relaxation without the starkness found in some spas. In addition to the heated floors, many of her choices add to the warmth of the space, including the rustic finish of the dark cabinetry and the lighter wood-like tiles forming the floor’s herringbone pattern.

While Liam gave her free rein over the design choices, Brennan wanted to make sure the space was somewhere he also felt comfortable relaxing.

“Some bathrooms can be very feminine, and that’s not fair,” she says.

She opted for a neutral color palette with accents of greenery and subtle pops of interest. Simple choices, including the clean lines of the square black pattern on the shower door and the thick beams on the ceiling above the soaking tub, make significant impacts in the space.

Inside the shower, several different patterns of the same soft sandy brick tile create an effect more calming than chaotic.

“That’s easy to accomplish if you pick the right tiles and not too many crazy patterns,” says Brennan. “You can just make the pattern with the actual tile.”

The brick tile repeats above the tub where two sconces with wood bases and black cages introduce a light industrial element while reflecting the style of the circular chandelier and tying in the black hardware found throughout the room.

Sprawling mirrors add to the open, airy ambiance, while an abundance of cabinetry allows the countertops to remain free of clutter.

“It’s nice because you can be totally organized with this many cabinets,” says Brennan.

Judge Crystal DeCastro Knapik calls the space a unique take on a bathroom.

“Despite the large size of this room, the finishes and fixtures bring a level of warmth to the space,” she says. “I love the shower doors and the careful placement of the herringbone tile floor.”

The space also features a designated makeup area and walk-in linen closet. All elements — from functional to ornamental — align to create an aesthetic inspired by all the time Brennan spent searching spa-inspired bathrooms on Houzz and Pinterest.

“You have a big vision and hope it all comes together and then it was like, ‘Yes!’” 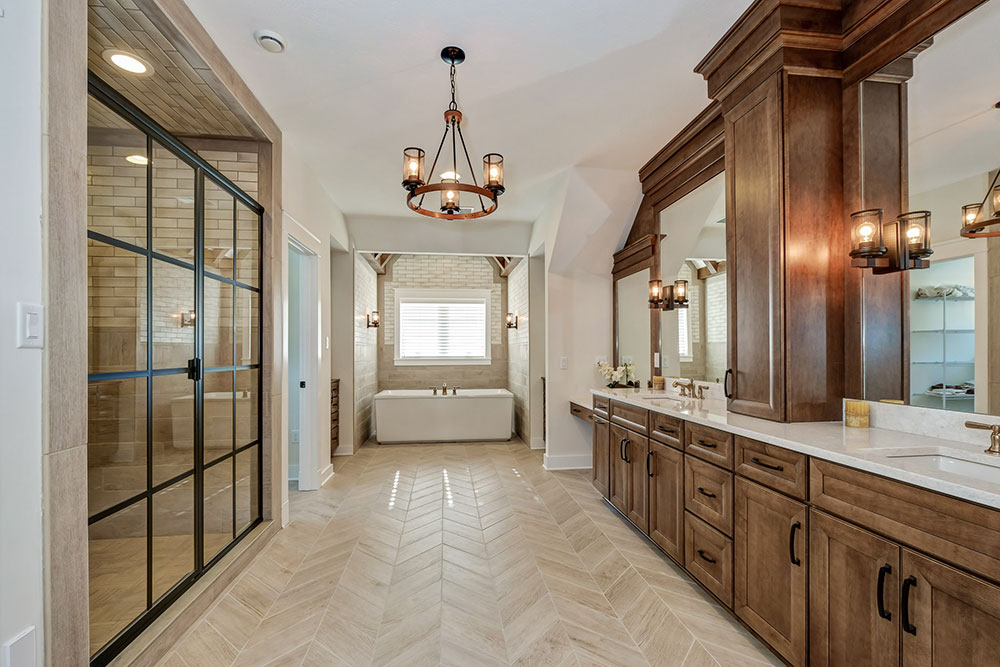