Bado’s Is So Good

Recipes from the Old Country mix with new dining trends at Bado’s Cucina (and Grandma would be proud).

One day, Mary Badolato lined up her grandchildren, and with the mock sternness of a gentle drill sergeant, instructed them to extend their arms, palms up. The befuddled children fidgeted as she enveloped each child’s hands in her own. Sam, age 6, was declared to have the warmest digits, and Grandma appointed him to be her kneader and “dough boy.” 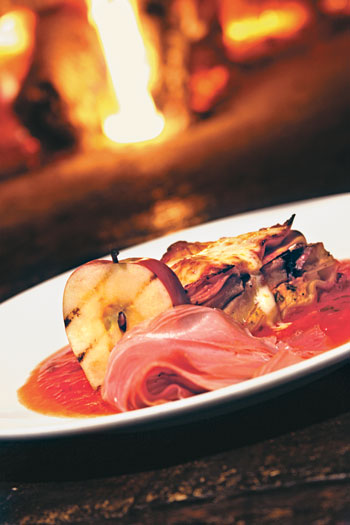 As young adults in 1984, Sam Badolato and his brother Frank opened a little four-table pizzeria, propagating Grandma’s bread recipe for the next two decades.

But day after day of plodding through bread dough can have its limits, Sam chuckles in a knowing way. During a brief respite from pizza, he and his fiancée, Becca Woodworth, traveled to Portland, Maine, where they entered Four Street, a rustic New England restaurant. “I was totally inspired,” says Badolato. “An old brick warehouse, all windows, a huge open hearth, produce everywhere, and everyone was cooking right out in the open. I looked at Becca and said, ‘This is what I want to do.’ I don’t even remember what I had to eat that night; I was so busy looking around—mussels, I know there were mussels on the table.”

Sam’s dream-come-true is Bado’s Cucina, which opened in March 2006 on the low side of Route 19 just across the Washington County line in Peters Township. If you’re looking for a sign of the culinary times, you could do no better than Bado’s Cucina, where the idea of small plates and sharing food is the norm. The impact of Sam and Becca’s New England awakening emanates from the elemental soothing force of the stone-oven fire and its gleaming copper chimney, a subtle presence in the way a campfire never grows weary.

The stage is set in a kitchen that has no deep fryer, microwave or conventional oven. There are sunflowers, baskets with bread and coffee, and a gorgeous antique wooden bowl carved by Native Americans that holds just-picked golden pears. An old ladder hung sideways is adorned with dried herbs. Family pictures offset in weathered frames add faces, enlarging the story. Sturdy, stout wooden tables compliment the rugged milieu.

Sam is happy at the stove but never too busy to stop and talk to customers, while Becca manages the floor as though she were born for the job. She knows whom to call by name, whose tie to fix, whom to simply nod “hello” to.
A perfect venue for small plates, Bado’s Cucina is small (30 seats), cozy, comfortable, the kind of place I’ve seen throughout Europe, where people crowd together and talk to one another.

Bado’s Cucina is conducive for sharing platters of wild-boar spare ribs, a lamb-chop trio, brasciole and roasted portobello. We ordered an antipasto to hold us over at an alfresco cocktail table, then plunged right into wood-fired mussels (whole tubes and tentacles included). To that we added biscuit-sized fruitwood grilled shrimp, which arrived hanging from a martini glass, a case for how to roast shellfish without drying them out. The smoky, crisp exterior didn’t seem to penetrate the flesh, and the cool tomato-horseradish slush for dipping is irresistible.

Stuffed banana peppers with sweet chorizo sausage and herbs are so hot they made my eyes water and my nose itch—but these delights were so good. The judicious use of mozzarella drizzled ever so slightly before the peppers hit the fire takes a tad of the sting away, but keep sufficient stores of Tuscan bread and bottled water close at hand.
I literally couldn’t wait to get back for more.

I have a theory. These days, appetizers no longer take second place to entrees. That’s because as the former can be less of more, allowing for more to taste; a little of this or that is slickly conceived fun. If you’re a curious eater, making an investment in an entree isn’t always rewarding. Even the best cut of meat can feel tiresome toward the end. Much of the same thing, good as it may be, can become sluggish. Recently, with the introduction of tapas-style eating, your palate now guides you as you skip from plate to plate. 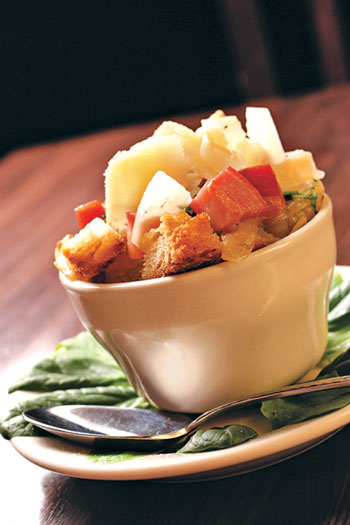 The next time we went to Bado’s Cucina, we added a friend and mixed it up even more. We passed around a gentle version of French onion soup, light on the muenster. Next was the antipasto, an adventure laid out on a plate starting with curly parsley and plenty of black olives, along with slices of Italian cheese and meat, including fresh buffalo mozzarella and the same incredible shrimp. A seasonal wood-fired frittata made of organic eggs had more texture than an omelet. It was filled with barely roasted asparagus, imported parmigiano, smoked mozzarella, artichokes and tomatoes.

Lobster-shrimp lasagne was that evening’s pasta—homemade pockets cut quite thin and cooked al dente, spruced up with a marvelous lobster-shrimp stuffing. Our server suggested we share a meatball, Grandma Badaloto’s recipe. The baseball-sized orb, served in its own bowl, is delicate and not too spicy.

Handcrafted, 10-inch pizzas are also inspired by Grandma’s recipe. “Thin but not chewy is the foundation for everything,” says Sam. Combinations are Bado’s tried-and-true legacy, but if you’re a pepperoni and mushroom stalwart, the house will oblige you.

A toothsome veal osso buco crowned with a caper berry, sort of like getting a pickle with your sausage, is the closest thing we found to an entree, along with recent cold-weather additions such as free-range elk with dried rosemary and carrot rub and antelope with poached apples and orange rind, garnished with a wild-cherry and balsamic reduction.
One recommendation for an evening’s finale: coffee and pumpkin bread pudding, served bubbling with cinnamon whipped cream.

No reservations; BYOB ($5 corkage per bottle); handicapped-accessible, no smoking.

This article appears in the January 2008 issue of Pittsburgh Magazine.
Categories: Restaurant Reviews