Front and Centre on the East End dining scene is Avenue B.

With its urbane ambience, creative menu and excellent service, Avenue B is a welcome addition to the East End dining scene. Owners Chris and Jenn Bonfili opened the restaurant in November with the goal of providing well-executed, unfussy dishes at reasonable prices.

An “American Bistro,” Avenue B offers an eclectic menu that subtly reflects the many influences in today’s American food. There’s traditional fare like meatloaf and mashed potatoes as well as Italian favorites such as risotto and lasagne and a contemporary raw-food plate. Also look for Asian-influenced dishes like tempura vegetables and red-bean ice cream.

This is a restaurant where the food is the personal expression of chef Chris Bonfili. The 32-year-old North Hills native has cooked in a variety of restaurants throughout the United States, including Colorado, Utah, New York and Delaware where he did a brief stint at a Japanese sushi house where he acquired the love for Asian flavors that is quietly evident on Avenue B’s menu.

In Pittsburgh, Bonfili was the opening chef for Red Room, designing the initial menu and cooking there for four years. Jenn is his perfect complement: She has management experience from Red Room and Six Penn Kitchen, and is now general manager of Avenue B, bringing to bear her solid business background and front-of-the-house experience.

The bistro is located on Centre Avenue at the corner of South Graham St., near the Market District and UPMC Shadyside Hospital, which makes it fun to walk through the door and experience the immediate contrast between the commercial storefronts of Centre Avenue and the warm, homey environment within. The gracious staff will greet you as you enter a handsome, uncluttered room of chocolate-brown walls and flickering candles. Once seated, you can look out the window and watch the city scene of buses and cars racing by on snowy streets and feel contented to be inside.

There’s something for everyone here. The first time I visited Avenue B, I was happy to see a woman from the corporate world in a suit and pearls seated two tables away from a 20-something woman covered in tattoos. Subsequent visits confirmed my impression of an interesting, mixed crowd. Chef Bonfili attributes the diversity of diners to the combination of reasonable pricing, a location that straddles a number of East End neighborhoods and a menu that changes rapidly and includes diverse choices. And, of course, there are those fans of Bonfili’s from Red Room who will travel from any location to eat his food.

One of the most inspiring things about Avenue B is the menu. The printed version is seasonal and brief, offering two or three choices in each category of “Beginnings,” “Main Events” and “Desserts.” However, the real action happens on the large chalk menu boards hanging on the walls on each side of the restaurant, where you will find a plentiful selection of daily specials. As a side note, although the words are large, they are written in cursive (would printing be easier to read?), and one of my dining companions could not read the chalkboard menus. Together, the printed and daily menus offer a good balance of salads and hot starters, seafood, meats, pastas and vegetables, with choices for the vegetarian and vegan upon request. 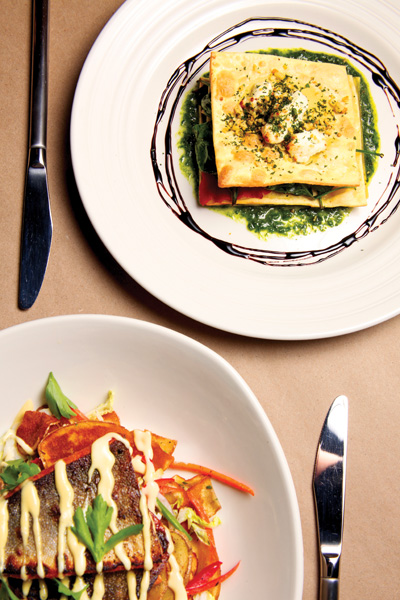 Each morning the chef thinks about his ingredients and designs the daily menu. This poses both opportunities and challenges for members of the kitchen staff. It gives them the opportunity to cook a unique and varied menu—boredom will never be their problem. The challenge comes in creating food that is consistent from day to day, both in style and quality. I found the food overall to be of good quality, but some dishes were more successful than others. For example, I tried two salads, somewhat similar in their descriptions, with one perfect and the other just so-so. I wish that Bonfili were inspecting and tasting each and every dish as it came out, sending out only the great ones, and making the adjustments needed to push the pretty-good dishes over the line to great.

I also have a minor complaint: The wordiness of the menu descriptions, which were essentially a list of ingredients, did not clearly differentiate between the major flavors and lesser ingredients, accompaniments and garnishes. This bothered me because the descriptions created a bit of disconnect between what I expected and what I received. Take the “Tortollo with braised beef short ribs, cippolini onions, wild mushrooms and crispy leeks” ($21) for example. Instead of being an assembly of discreet ingredients, the dish was more like a bowl of good beef stew on twisted pasta with some leeks garnishing the top. It was delicious—rich and flavorful—so maybe the words don’t matter.

In the “Beginnings”, the “Prince Edward Island mussels with roasted garlic tomato fume blanc and grilled bread” ($11) was my favorite appetizer. The mussels were perfect; the broth was subtle and the bread was crusty (although, again, it need not have been named in the title of the dish). I also liked the “Mushroom brioche brie bread pudding with roasted chicken and mushroom fricassee” ($9). This was an unusual dish that packed a lot of rich mushroom and chicken flavor and had an unusual textural contrast between the soft bread-pudding base and the chunky chicken and mushrooms on top.

The “Beans and greens flatbread” ($7) was served as mouthfuls of greens, beans and sausage scooped onto pita bread. The beans and escarole were great, but the pita was too weak to hold up its contents and was not, in my mind, an improvement over service in a bowl. I also tried the “Aged cheddar grilled cheese with roasted garlic tomato bisque” ($6); the concept was great, but the grilled cheese was mostly crust, and the bisque was creamy but bland.

I had one terrific salad: the “Local greens, caramelized cippolini onions, grape tomatoes, aged sherry vinaigrette and crispy sweet potatoes” ($6). The ingredients were fresh, and the salad had clear, bright flavors. Another salad I tried was a little less successful: “Baby lettuce, pomegranate, roaring 40’s blue and candied bacon with warm bacon balsamic vinaigrette” ($8) sounded promising, but the dressing was vinegary, and the bacon was too sweet.

In the “Main Events,” we tried the “Wild-caught fish and chips, Napa slaw and malt aioli” ($22), a popular entrée on the seasonal menu. This dish offered tasty flavors and a very nice balance of texture and color. The portion of fish and chips was generous, and we requested seconds on the aioli.

“Kobe meatloaf with goat cheese and chive whipped potatoes with crispy onions and blistered tomato jam” ($21), another signature dish, was a mixed bag. The meatloaf was savory and flavorful, but the goat cheese was lumpy in the potatoes, and the crispy onions were room temperature.

My favorite entrée was the attractive “Grilled Gulf shrimp with cheesy grits, spinach and picante peppers” ($21). Each component was well-prepared: The shrimp not over- or undercooked, the grits creamy, the spinach bright green and the orange pepper sauce a piquant contrast.

The plated desserts were disappointing. We tried the “Caramel blondie torte” ($8) with pretzel buttercream and green apple brûlée, which had a mealy texture and a too-sweet topping. “Toasted chocolate cocoa bread pudding with white chocolate mascarpone and strawberry powder” ($8) sounded and looked great but tasted like a confused mixture of ingredients that didn’t mesh. It is a rare day that I don’t finish dessert, but I couldn’t finish these.

The saving grace in the dessert area was the unique homemade ice creams, a trio of which is available daily. My favorite trio was the Asian-influenced combination of sesame-seed, red-bean and green-tea ice creams with fried bananas. In another sundae, I loved the crunchy sugar cookie-dough ice cream, which consisted of vanilla ice cream with hunks of cookie inside. 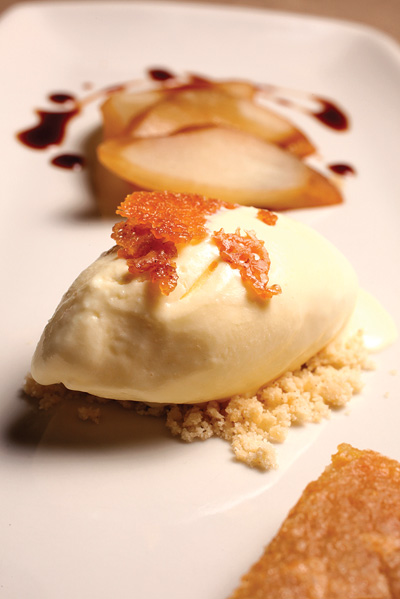 The coffee was served in a French press with a timer, and I greatly appreciated the care and concern made toward a good coffee experience.

My highest compliment goes to the service, which was exemplary upon each visit. The hosts were sincere and hospitable. Members of the wait staff were friendly and attentive without being intrusive. They were knowledgeable about the food and able to make detailed descriptions and recommendations. It was refreshing to have the silverware and plates presented and cleared at the right time so we always had what we needed and could concentrate on the food.

With its informal, urbane feel, Avenue B is a promising new restaurant that I predict will become a regular among East End dining choices. Its unexpected location is near to everything; street parking turns out to be easy to find; and it’s a nice place to be. You can bring your friend, your mother or your co-worker, and he or she will each find something to like.
P.S. And if you are wondering, the “B” stands for Bonfili.

Valentina revels in the many pleasures of food. She can find bliss in foods high and low: a crunchy, sweet fall apple, a humble but marvelous french fry or a heavenly seven-course French meal. A graduate of Pennsylvania Institute of Culinary Arts, Valentina has worked in several local restaurants, gaining an appreciation for the challenges of delivering a quality restaurant experience. Valentina grew up in a Greek family in Chicago. She moved to Pittsburgh from San Francisco 15 years ago, and has traveled and eaten widely in the United States and in Europe.

This article appears in the March 2010 issue of Pittsburgh Magazine.
Categories: From the Magazine, Restaurant Reviews