At täkō – Terrific Tacos and Tequila Are Just The Beginning 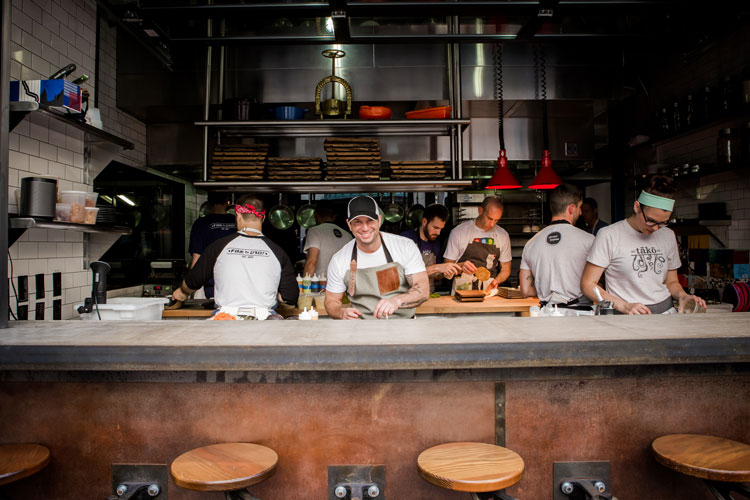 At täkō, Richard DeShantz and Tolga Sevdik’s newest downtown restaurant, chefs hustle on the line inside a brightly lit glass-box kitchen on display streetside. DJs spin electronica inside a cage suspended by a grated metal walkway that hovers above the concrete floor.

Hallucinogenic images of sea and land line the walls alongside a massive reproduction of Andy Warhol’s “The Last Supper.” The space is illuminated dimly by an array of Edison bulbs and bordello chandeliers bathed in red lights. Magnetic letters on the wall beg you to spell out naughty limericks and secret messages. It’s dark. And it’s loud, very loud.

From bar to banquette, service at täkō all around is excellent. Sevdik handles front-of-house training with Managing Partner Kevin Kelley, and they’ve done a terrific job of balancing the liveliness of the atmosphere with knowledgeable and attentive attention.

täkō is as much bar as it is restaurant, and in that capacity, it’s the most noteworthy opening in Pittsburgh since DeShantz and Sevdik launched two-time James Beard Outstanding Bar semi-finalist Butcher and the Rye in November 2013. 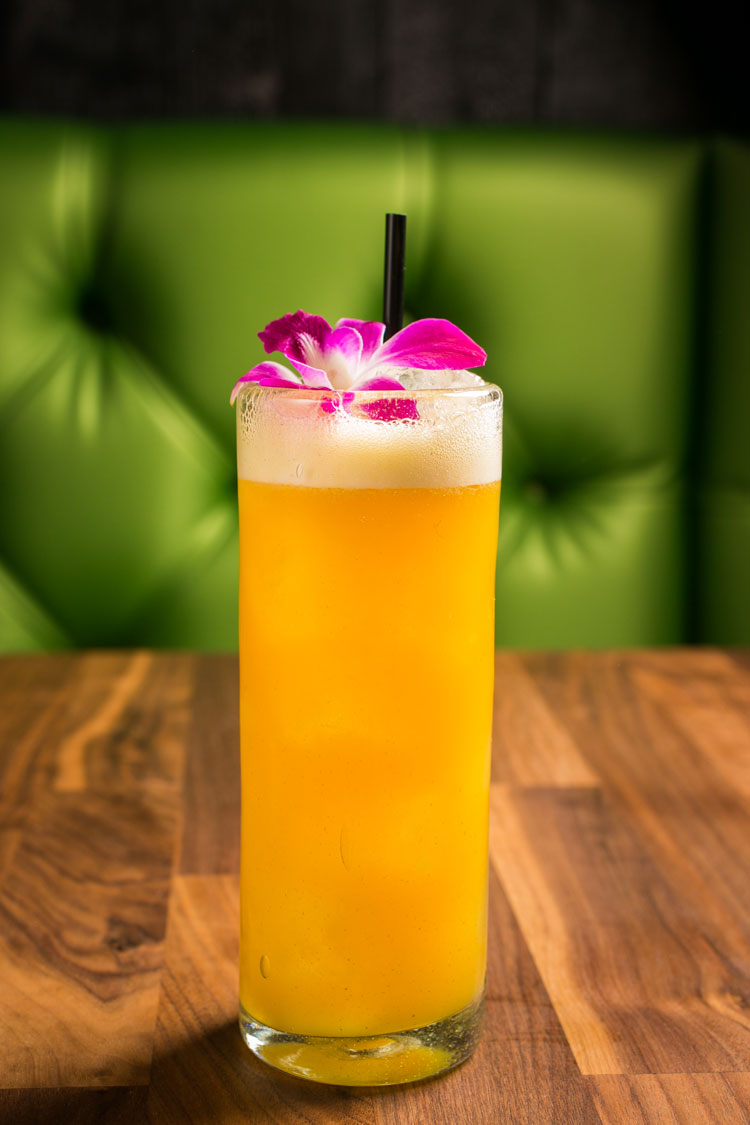 Spencer Warren is the beverage director of the restaurant group, which in addition to täkō and Butcher, includes nearby Meat & Potatoes. He also crafted the Desert Lily, a powdery and tart spin on a frozen daiquiri that was named the 2015 official cocktail of the prestigious Tales of the Cocktail conference in New Orleans. täkō is another notch in Warren’s belt, whose influence at now-closed Embury and later at Acacia helped to define Pittsburgh’s bar scene.

Bar Manager Maggie Meskey took the reins with Warren in creating täkō’s outstanding cocktail list, and she oversees the bar’s collection of about 250 varieties of tequila, plus 75 rums and 55 mezcals. She and the crack team of all-star bartenders will have you heading happily home; consider walking or ridesharing to täkō. Meskey may well be running the most interesting bar program in Pittsburgh right now.

Avoid the saccharine Blue Mango Mai Tai and let your mood guide you to any of the other 10 cocktails or 11 margaritas on the bar menu. Classic-cocktail fans should consider the smoky Oaxaca Old Fashioned, which swaps in tequila and mezcal for the traditional rye. Bartenders tend to use spicy cocktails as an excuse to show off, and because of that the drinks nearly always are too hot to enjoy. The passion fruit margarita, however, is beautiful: jalapeno shrub adds consistent heat backbone, passion fruit provides tartness and Sauza Hornitos blanco tequila gives the earthiness. 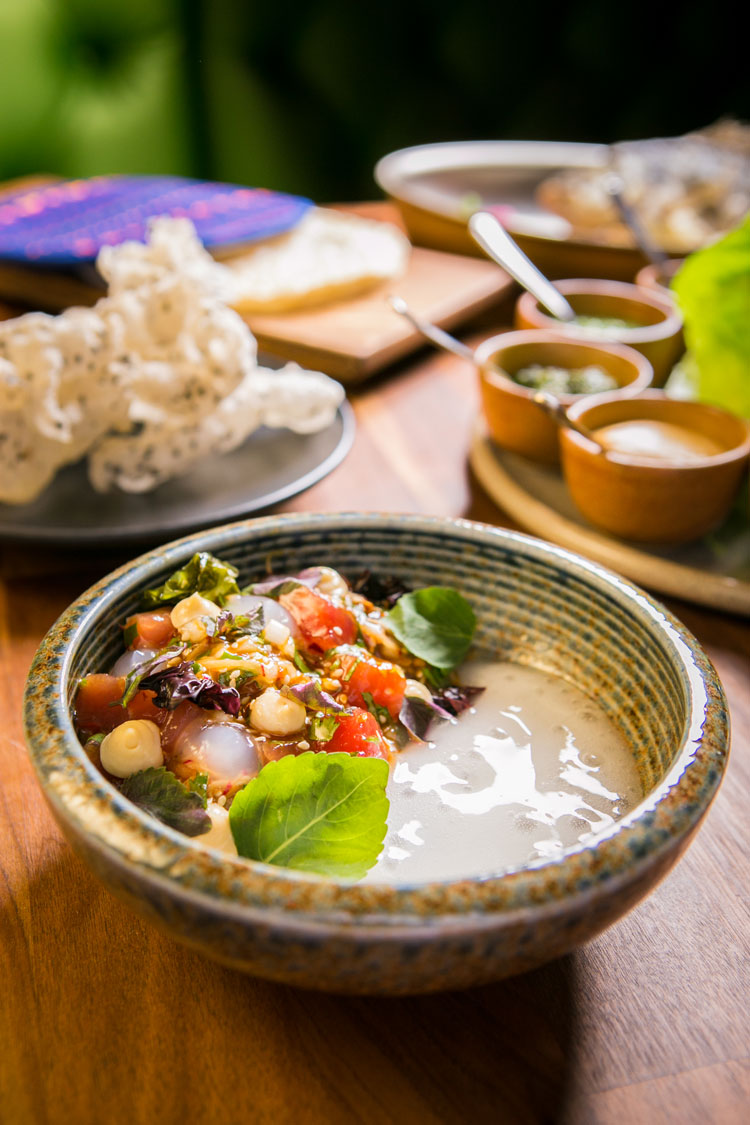 DeShantz runs the kitchen with Chef de Cuisine Dave Racicot, formerly of notion and Lautrec. The opening menu was ambitious, featuring dishes that combined DeShantz’s flair for crowd-pleasing with Racicot’s pedigree as a modernist chef. When you have a bar called täkō and an entire side of a menu devoted to tacos, however, dishes such as English Peas — despite its bright flavors and presentation — proved to be hard sells. Now it’s mostly tacos, though some side dishes, including the beet tostada and the poke, are worth considering as appetizers.

The “create-your-own” guacamole menu confuses me. Why am I allowed to make a “guacamole” with corn, smoked salmon, blue cheese and soy? As you always should do with guacamole, it’s better to stick to a traditional preparation; they do that rather well here, too.

Classic tacos such as Baja fish, carnitas and al pastor all are textbook-terrific, and by leaps and bounds they are the best echoes of Southern California and the Baja Peninsula in Pittsburgh. Of those, carnitas especially is good; the sweet fat of the braised pork is cut with bright salsa verde and textured with crispy chicharrónes. 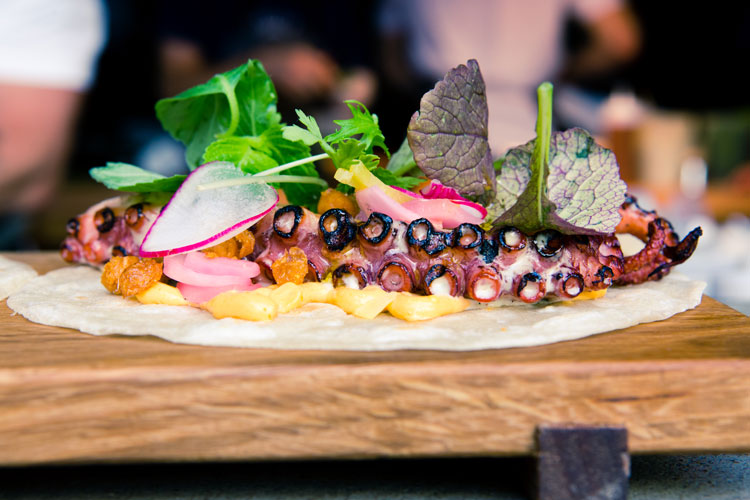 Tacos stray from classic with varying degrees of success. täkō — grilled octopus, harissa aïoli, preserved lemons, crispy chickpeas, mizuna and pickled red onion — is the restaurant’s namesake (Japanese for “octopus”) and my favorite dish on the menu. It’s briny, bright and oceanic. “This is exactly why people shouldn’t be scared of eating octopus,” a friend said.

Bistec features beautifully grilled wagyu skirt steak, but the flavor is muted by excessive and bland queso fresco. The chorizo taco tastes fine, but it has a texture that feels as if I’m eating beach sand.

There’s hope for those less-successful tacos because DeShantz continues to tinker with the recipes. Take the duck taco, which was limpid and distracting when the spot opened; refined with deeper echoes of moo shu duck, it’s now one of my top picks.

täkō’s atmosphere doesn’t scream, “Order dessert!,” but the options are quite good. Racicot’s influence is apparent in the must-get coconut tapioca. It’s served with a tart passion fruit sorbet that cuts through the soft, comforting and subtly flavored tapioca. Diced mangoes add another layer of tropical sweetness.

If your idea of a pre- or post-theater meal downtown involves serious, hushed conversations, you’ll be happier elsewhere. If you like to get lost in the moment and carried away with the night, täkō is that kind of place. It’s my kind of place. 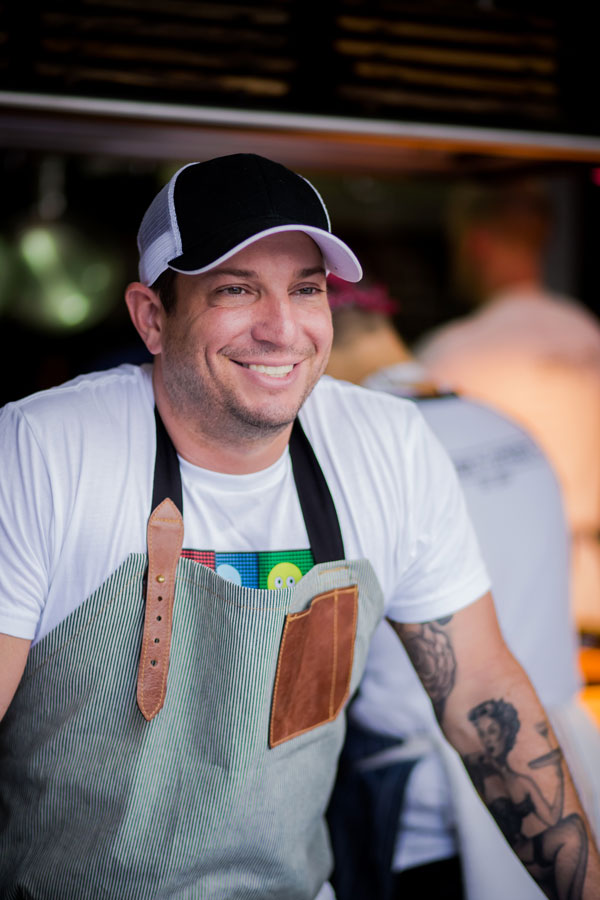 What inspired you to open a place such as täkō?
The space next to Butcher was open, and I really like Sixth Street. You have Penn Avenue, which is nighttime dining, and Market Square, which is lunch; Sixth Street is the bridge between the two. Then I was thinking, “What does Pittsburgh need?” It’s not just what I want to do, [but] it’s what this city needs. Well, we need a type of place with street food and a late-night vibe. And we needed a taco joint. I designed it to look like a food truck from the outside, and that’s what you see from the street. But behind that is a really fun tequila bar.

How did you go about recipe development?
I brought Dave [Racicot, now Chef de Cuisine,] on two months before we opened. We worked on the menu from there, trying and testing different taco shells and meats and combinations. And we’re still doing that because you always want to get better. Both of our styles are based in French technique, and this was really exciting because we were learning how to work in a different style. [When chefs think] they know everything, that’s when they get stale.

How did you balance the more traditional tacos with the more chef-driven ones?
I knew I didn’t want to do a straight Mexican restaurant. I didn’t want to put myself in a corner about “this is what this place is, and so this is what I have to do.” I knew I wanted to play, and that’s reflected in the design on the space and in the menu. I wanted to make the classics great since some of the best tacos I ever had were the classics, like an al pastor: pork, pineapple, onion, cilantro; that’s delicious. Then I wanted to have some twists and turns, too. It’s so much fun to experiment and learn out of your comfort zone.

What’s the importance of traveling?
There are a couple of reasons. When you step away from what you’re doing every day, you appreciate what you’re doing even more. And you can see the things you’re doing right. It’s also motivating. You eat at places where people are doing things on a high level, and it makes you want to do that, too. Like I said, if you think you know everything, you go stale. You have to keep growing and learning. Food is a common language. Travel makes you realize there are other things out there.

This article appears in the September 2015 issue of Pittsburgh Magazine.
Categories: From the Magazine, Hot Reads, Restaurant Reviews