Reviews of "Fifty Shades Freed" and "The Cloverfield Paradox," plus local movie news and notes. 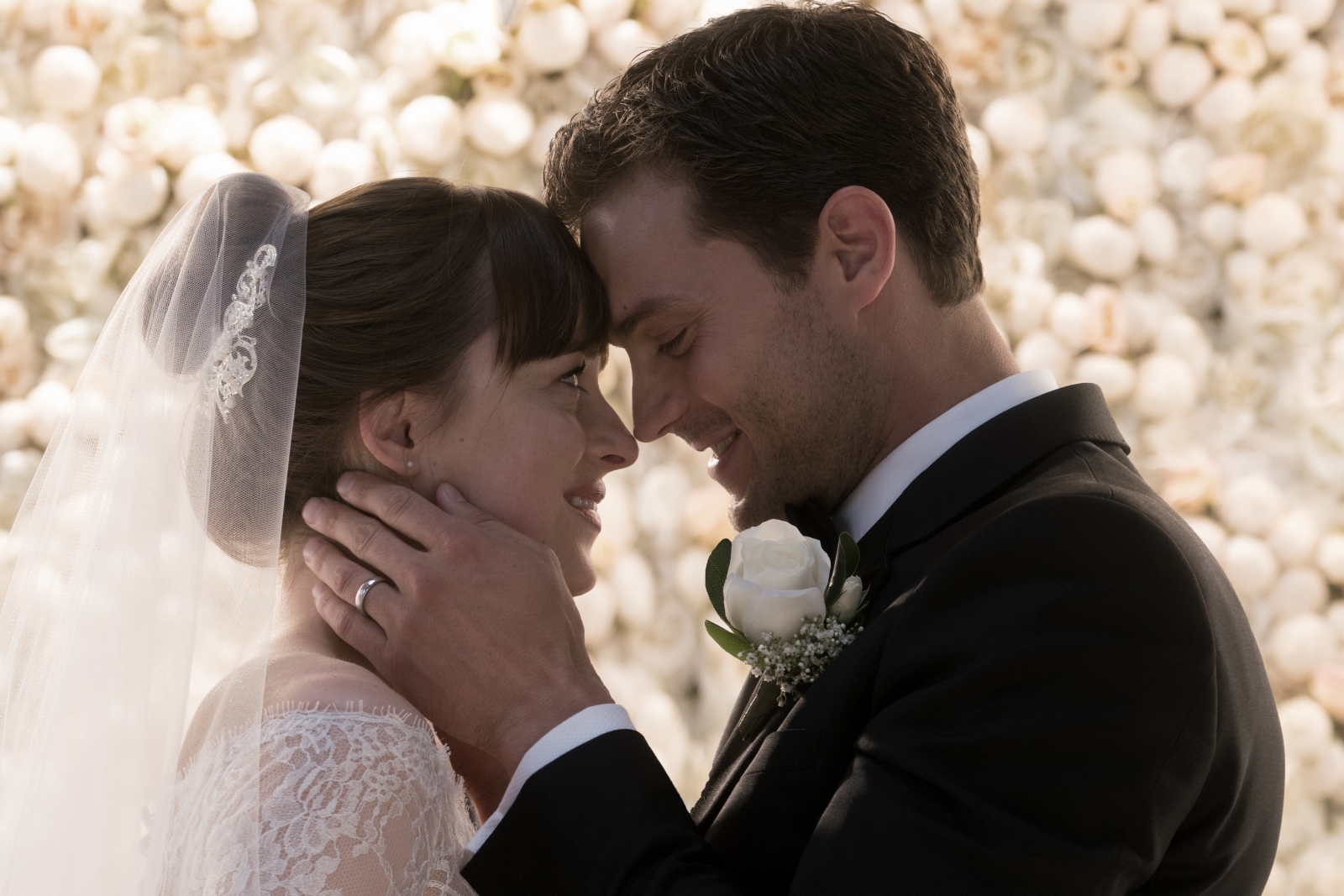 And so, with a whimper — several of them, actually — the feeble “Fifty Shades” series reaches its tepid conclusion with the overwhelmingly bland (if perhaps not as actively wretched as its predecessors) “Fifty Shades Freed.”

A brief recap: Once upon a time, a writer of “Twilight” fanfiction converted her sadomasochistic opus into a vampire-free book series. The novels turned into tawdry, pulp hits, and any top-selling book series will eventually become a film series — even if that’s an extraordinarily bad idea, as is the case here.

Despite the earnest efforts of some of those involved — only some because, while star Dakota Johnson is a good actress, co-star Jamie Dornan wouldn’t know how to act cold if you froze him — the series has been thoroughly awful from the starting line. E.L. James’ books work, I’m told, as breezy escapist schlock on the page, but the stories are too episodic and thin to be converted into film plots (and the undeniably toxic nature of the relationship depicted is, even in a work of semi-erotic fantasy, too awful to ignore).

“Fifty Shades Freed,” the third film in the series, finds Christian Grey (Dornan) and Anastasia Steele (Johnson) as newlyweds, settling into the routines of married life (inasmuch as one can settle in when half of the union is a kink-obsessed billionaire). Most of the movie is simply At Home with the Greys, though the nominal conflict and structure wraps around Ana’s old boss (Eric Johnson) stalking the couple.

The best that can be said about this chapter is that it’s not as bad as “Fifty Shades of Grey” or “Fifty Shades Darker,” in that not much happens, so not much can go wrong. Also, while Grey is still utterly despicable, slight evolution in his character and a strong performance from Johnson also make “Freed” the least ethically troubling of the bunch.

The tawdry stuff is certainly no reason to buy a ticket; this series has always uncomfortably danced around the invisible line that separates mainstream cinema and pornography, landing in a disappointing middle ground, trying to be racy but lacking the gumption to depict anything more than standard (if long) Hollywood sex scenes.

“Freed” feels like an act of obligation; they had come this far, so they were gonna make the last one. They got through it. It’s done. Let’s let this whole franchise quietly slip into the realm of a pop-culture footnote, where it very much belongs.

If you’re going to get people talking about the third chapter of a niche sci-fi series, you’ll have to either make a great movie or pull a crazy marketing stunt. Sunday, Netflix picked the latter, and did a fine job of it.

“The Cloverfield Paradox,” a prequel to the 2008 giant-monster flick and a … relative, I suppose, of the 2016 confinement-horror movie “10 Cloverfield Lane,” seemed to face an uncertain future after a series of delays; a week ago, the film didn’t have a solid release date. Then a Super Bowl commercial revealed that Netflix would be streaming the film — immediately following the game. It was a gambit that worked, with many more people talking about the film than would’ve under any other conceivable circumstances.

So is it any good? It is certainly good enough. The film follows a crew of scientists in the near future as they conduct a high-stakes physics experiment aboard a space station orbiting the Earth; when things go sidewise, the space-time continuum gets tricky, and horrors both gruesome and existential follow.

It’s got an okay opening, a great middle and a bad ending, but the flaws are covered by an excellent cast. Gugu Mbatha-Raw carries the film in the lead role, but she has a crew of unsung allstars behind her, including David Oyelowo, Elizabeth Debicki, Chris O’Dowd, Zhang Ziyi and Daniel Brühl.

The Montage: A Post-Gazette story reports that the Cultural Trust is moving forward on the long-gestating plans for a Downtown movie theater; the current plan, bolstered by a sizable investment, calls for a five-screen movie theater on Sixth Street, in the former Bally’s Total Fitness location. Millions are yet to be raised before the plan moves forward, so don’t order your popcorn just yet … The Tull Family Theater in Sewickley is expanding its Tuesday-night classics series, adding Wednesday matinees of their repertory picks. This week’s holiday-appropriate selection is the 1970 Oscar winner “Love Story” … Speaking of Valentine’s, Row House Cinema is celebrating with a quartet of romances, two traditional (“It Happened One Night” and “Ghost”) and two postmodern (“Obvious Child” and “Scott Pilgrim vs. The World.”) The latter two are personal favorites … The Academy Award-nominated short films take up residence at Regent Square Cinema through March 1. (Check showtimes, as the films appear in three separate programs, for live-action, animated and documentary shorts, respectively.) These are always excellent selections (and a nice way to get a leg up on your Oscar pool). If you’d like to seem them writ very large, the shorts also will be appearing at the Rangos Giant Cinema later this month.