Rick and his camera crew stumble upon a unique way to persuade people to eat their greens. 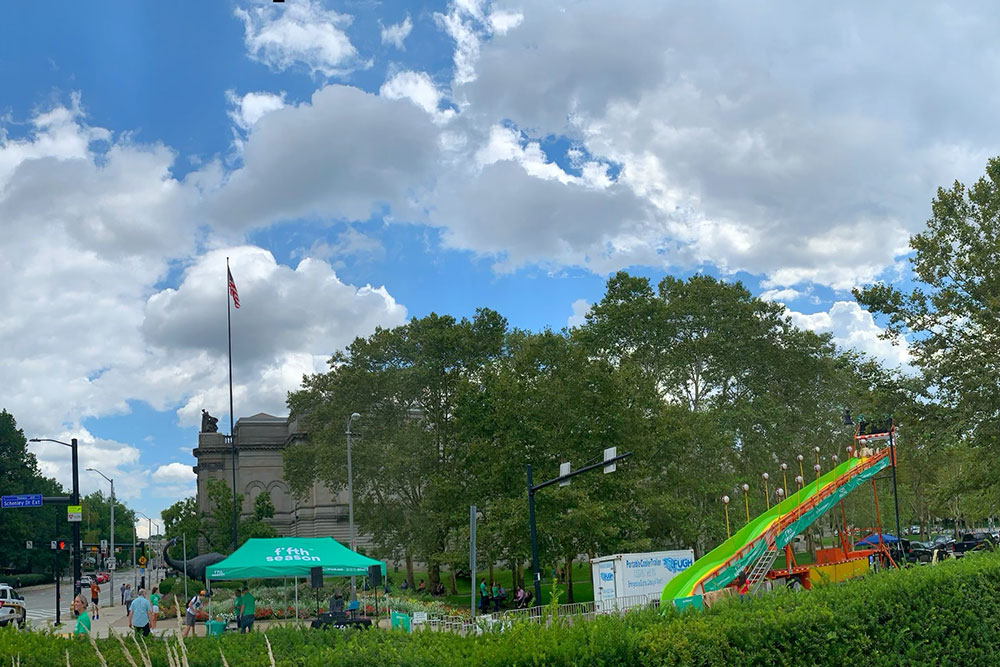 “Did you see there’s a big slide over by the Cathedral of Learning?” My trusty cameraman and friend Frank Caloiero was the first to tell me about the set-up last week. “If you go down the slide, you get a free salad,” he said. At first, it didn’t make sense; what’s the connection between slides and salads? But it was wacky and unusual, so we went to check it out.

A big, tall, tricolored slide filled a good chunk of Schenley Drive Extension, not far from the beloved Dippy The Dinosaur statue, and that road was closed for three days for this amazing promotional event. Yes, a salad company called Fifth Season had erected this “super slide,” and they were encouraging all wandering students and other passersby to give it a go, rewarding all riders with leafy green delights.

SUPER-SLIDING FOR A SALAD! from Rick Sebak on Vimeo.

So, with minimal encouragement, Frank and I decided we’d grab a burlap bag to sit on (complete with a pocket for your feet) and we took the plunge. Fast, fun and gloriously goofy. It was a sublimely silly way to earn a free salad, but there was so much more to learn.

Although this Fifth Season company looked slick enough to be a huge national enterprise, it is actually a young, innovative local company founded primarily by CMU students, and they’re growing a variety of greens in a futuristic farm in Braddock (next to the Edgar Thomson Steel Works) that’s tended to by a cool mix of robots and people. One of the employees used the term “cobotics” to imply that it’s not just machines doing all the work. 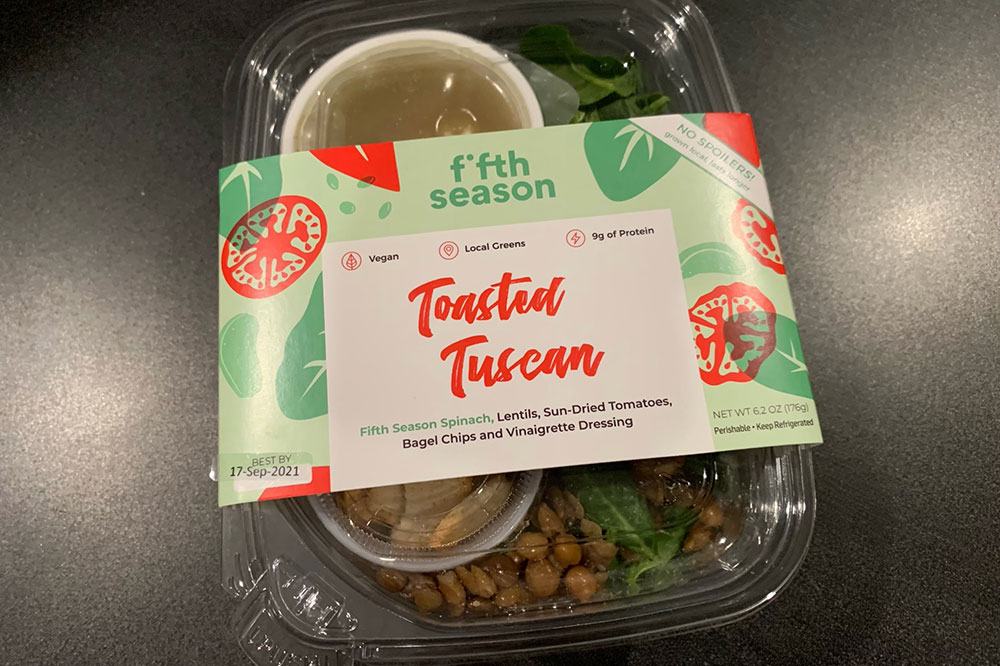 They had five different salads to give away, each with a theme from Sweet Grains to Spicy Southwest, each featuring bright, crunchy green leaves along with interesting accompaniments such as sun-dried tomatoes in the Toasted Tuscan and farro and dried cranberries in the Crunchy Sesame. A proprietary dressing (engineered with all-natural sugars and optimum “clingability”) was included in a separate cup, and everybody who tried a salad seemed to be delighted at the quality of the creation. 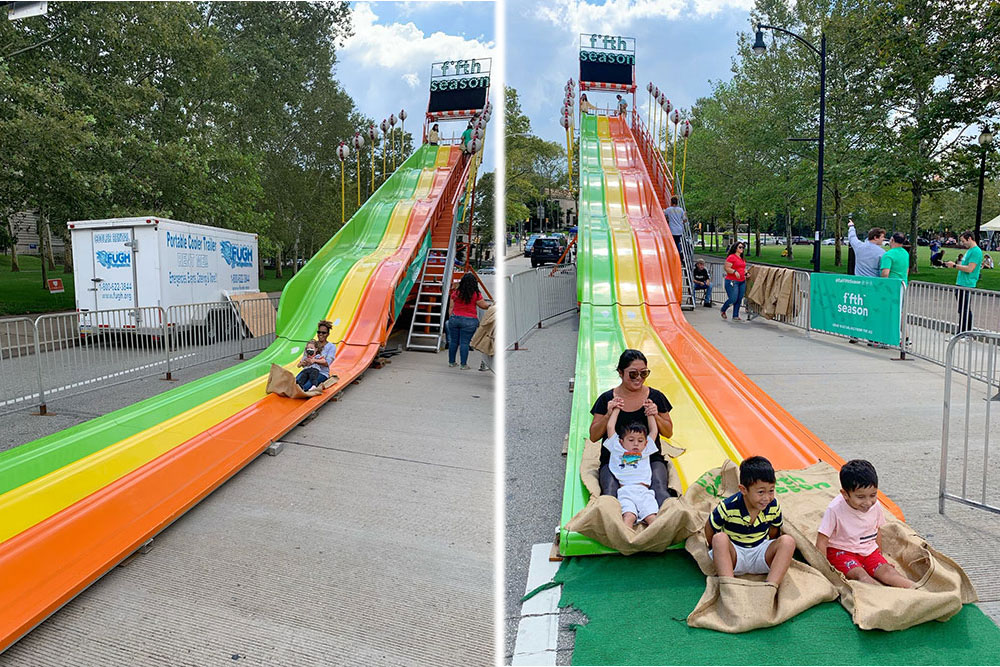 I met Fifth Season’s creative director Ben Hall there at the slippery site, and he explained that the company is about five years old with offices on the South Side as well as that custom-made, 60,000-square-foot “vertical farm” in Braddock. Robotics and excellent engineering now allow the business to grow its greens under optimum conditions (“95% less water, 97% less land, and no GMOs ever!”), and the local facilities mean that the lettuce blends and the spinach are fresher and longer-lasting than most crops of this sort that come from California or other distant locations.

I think Ben may be the one who came up with this crazy slide idea — he said Fifth Season wants folks to fall in love with these greens, and this promotional gimmick was just part of that. He said you can find the salads now in most Giant Eagle supermarkets in the refrigerator case, or you can order online at fifthseasonfresh.com. Promotions never stop.

These local leaves are also now the “official greens” of the Pittsburgh Penguins. 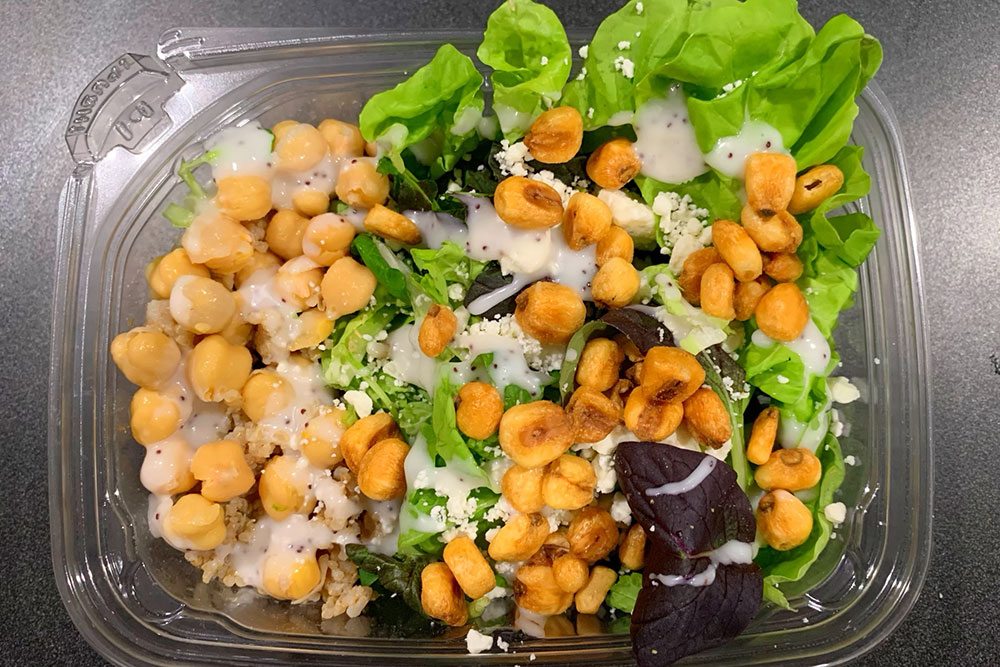