Mitch's BBQ got its start as a micro-convenience store and car wash that sold ice cream. 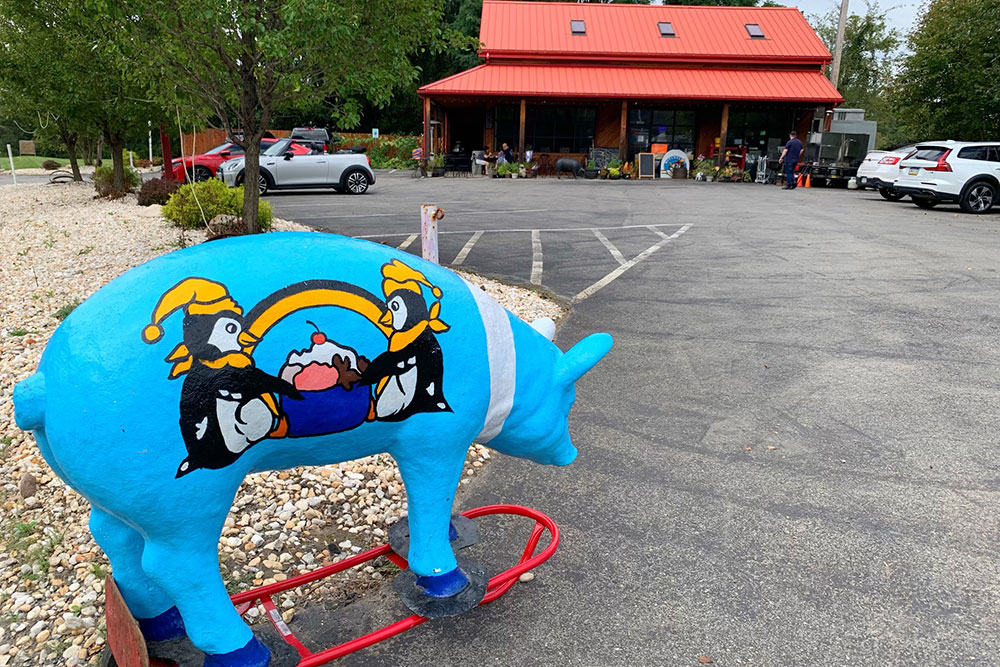 There are no rules about where you might find great food in these parts. For instance, a really wonderful juicy barbecue place may be lurking in an old gas station building on Route 19 North in Warrendale with a blue pig statue out front. 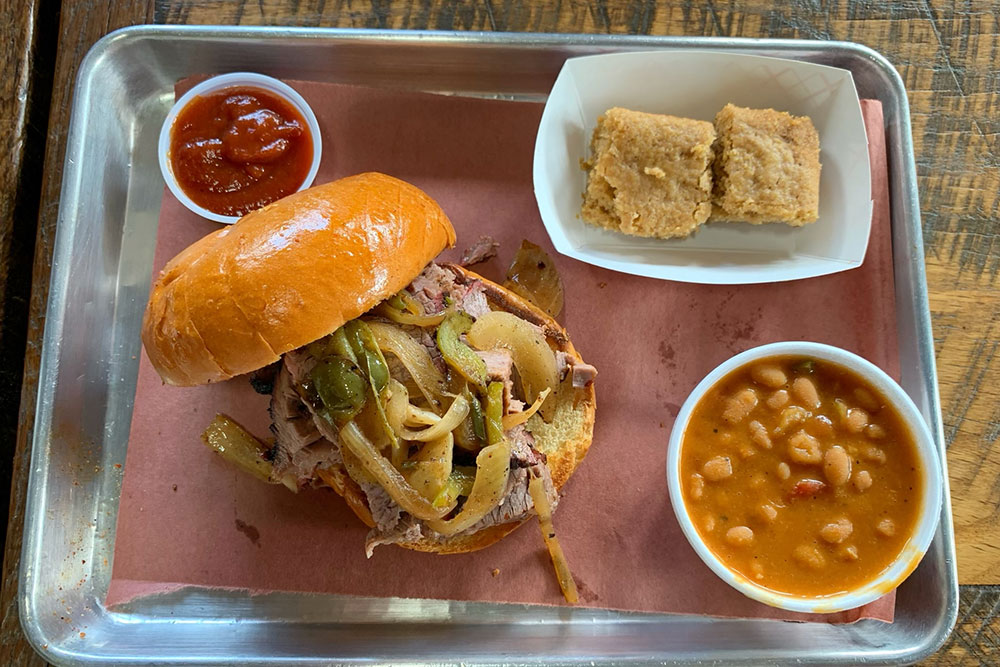 It’s called Mitch’s BBQ, and Mitch Evanitsky and his chef son Justin make some outstanding brisket there, along with chicken, pulled pork, ribs, pork belly, sausage links and a variety of sides that will delight fans of all of these things. Not to mention surprises like steaming bowls of ramen topped with beef brisket and tacos made with various meats, as well as house-made kimchi and the kind of Mexican corn on the cob that’s often called “elotes.” 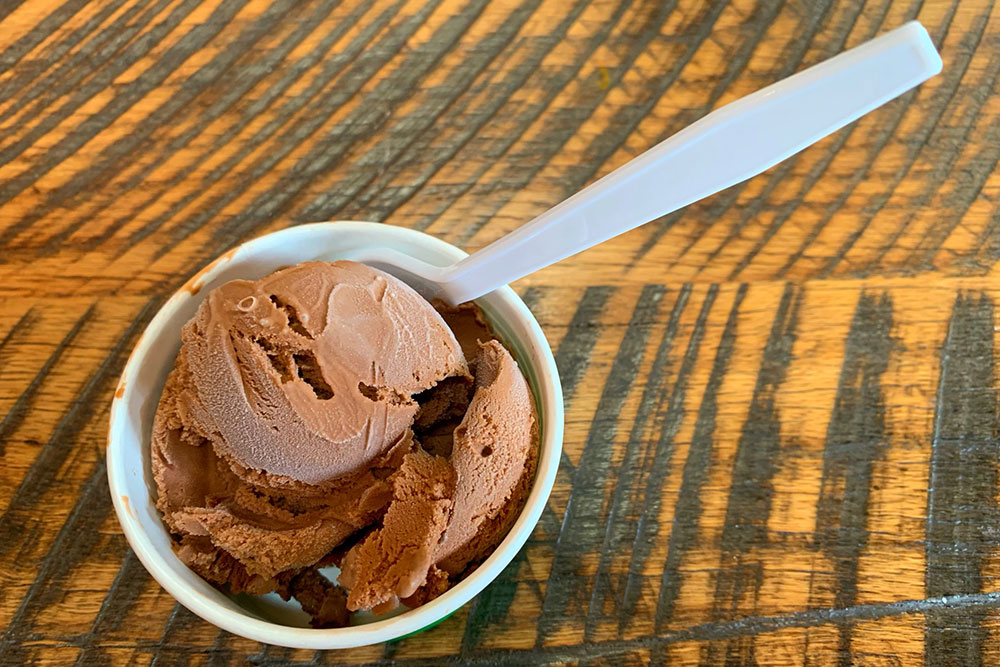 There are also some rich and unexpected homemade ice creams to sample or to have as dessert after a meaty feast. Jalapeño Cantaloupe Sorbet was available on a recent stop, but there were traditional flavors like chocolate as well as some thick Blueberry Maple and amazing Strawberry Gojang ice cream. 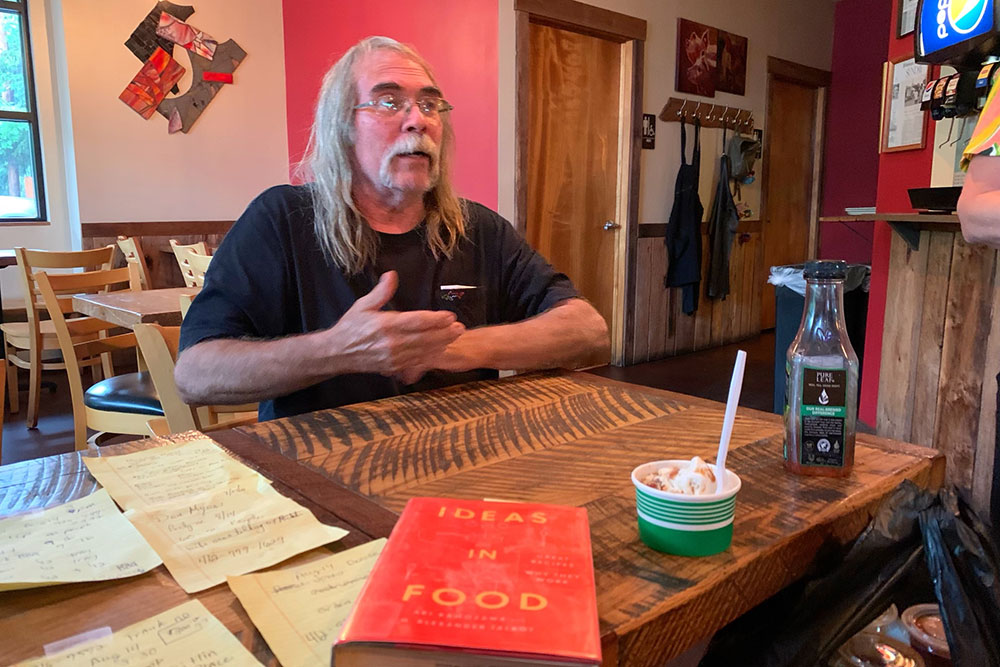 Mitch will tell you this whole tasty tradition began in July 1988. “I bought a business I never should have bought,” he explains. It was a gas station on Babcock Boulevard with a car wash and “micro-convenience store” and an attached laundromat. On Aug. 1, 1992, he started selling unusual premium homemade ice cream that he made with Italian flavorings.

“My banana and my pistachio were very popular, and I had Jeffrey Dahmer Chocolate, named for the serial killer who had worked in a chocolate factory in Milwaukee in the 80s.” 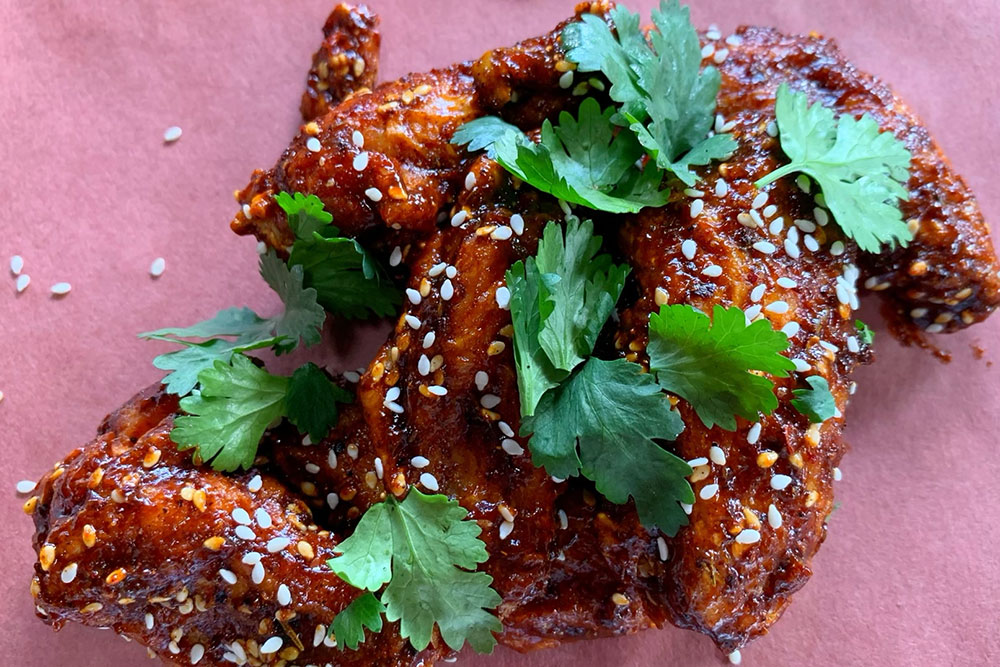 Then wild and crazy Mitch got interested in making barbecue, drove to Texas in 1994 to get his first offset smoker, and that same year won an award at the 3 Rivers Rib Cook Off. Before long, Pittsburgh Magazine’s restaurant critic Ann Haigh reviewed his work, and his catering business started to take off.

In 1998, he moved his businesses to Hampton Township, dubbing the new building “Miss Maya’s” (after his daughter) with the subtext “Serving Mitch’s Ice Cream.” He continued making barbecue and doing catering jobs, and the businesses grew.

Although his current Warrendale restaurant opened in 2018 with son Justin in charge, Mitch had purchased the building back in 2003 and worked on rehabbing and converting the former gas station while also running his catering business there. 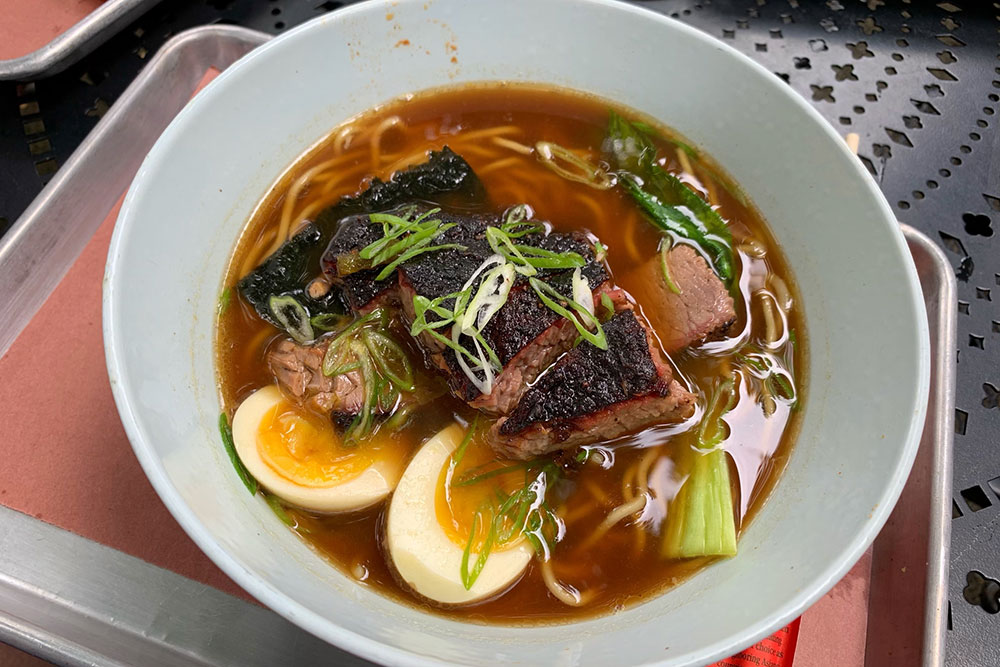 RAMEN WITH BRISKET ON TOP

Chef Justin immediately introduced some innovative ideas including making ramen and other more exotic variations with the barbecued meats. “All I’ve ever done is fix food,” says Justin, who had studied at Indiana University of Pennsylvania’s Punxsutawney Culinary School before working at several high-end eateries around town. He readily admits he is still inspired and influenced by cookbooks. David Chang from Momofuko in New York and Thomas Keller from the French Laundry in Napa are chefs that he follows and tries to emulate in this beautiful little family-run barbecue joint. 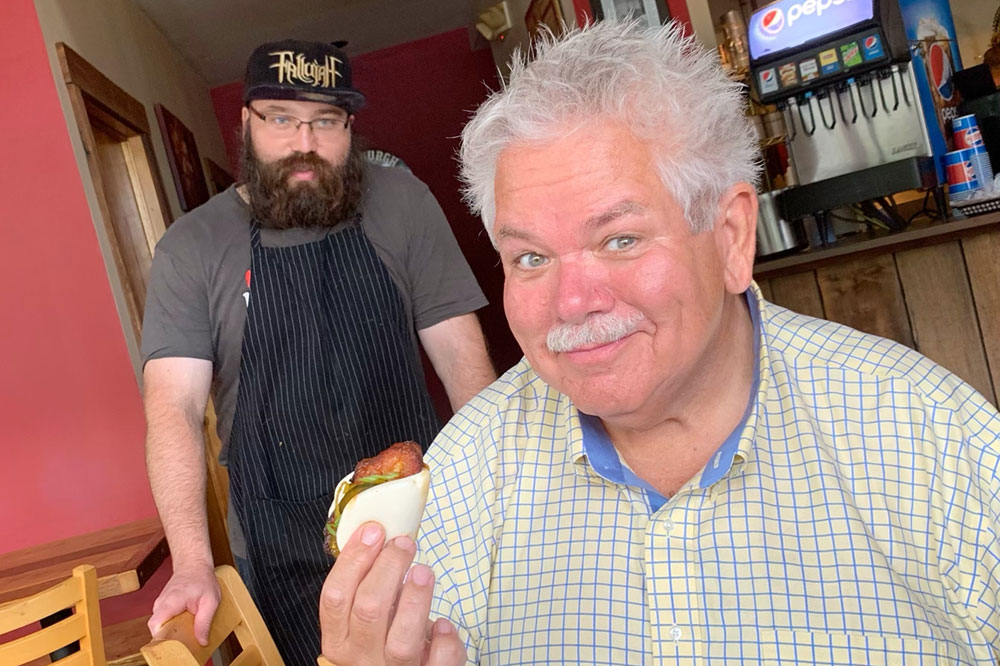 JUSTIN WAITS FOR RICK TO TRY THE PORK BELLY BUN

On recent visits, I’ve been trying as many items as I can. Justin was understandably proud of his tender brisket, his pork belly buns (with meat cooked slowly for 16 hours then pan-seared slightly before serving) along with some excellent chicken wings covered in a morita sauce with sesame seeds and cilantro on top. 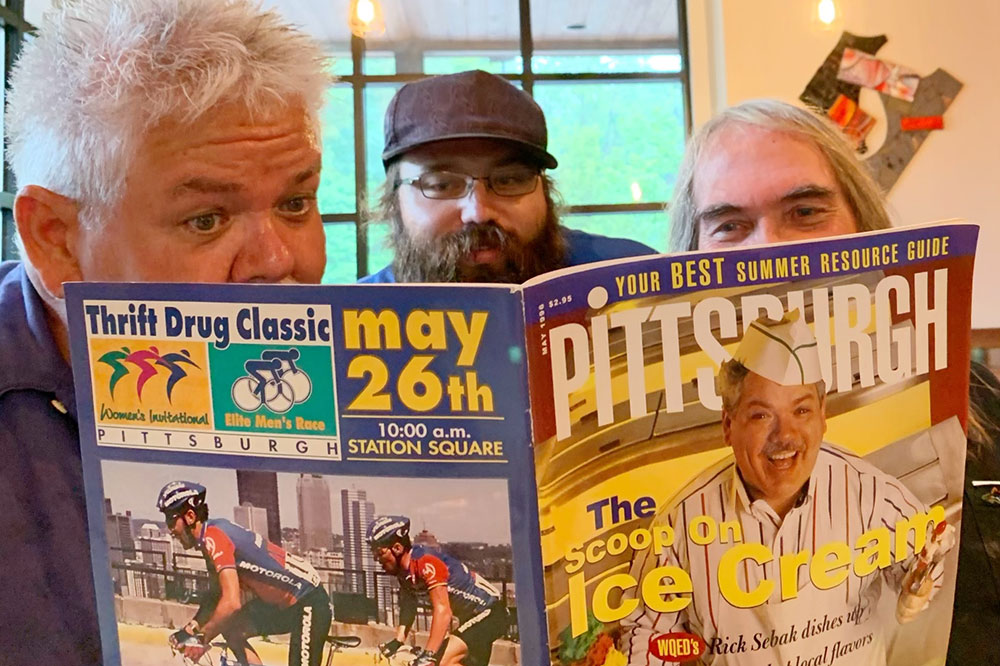 RICK, JUSTIN & MITCH WITH A 1996 PITTSBURGH MAGAZINE FEATURING MITCH IN A DRYER AT HIS BABCOCK BOULEVARD LAUNDROMAT

Justin and Mitch also took a moment to look again at the write-up I did about “Mitchell’s Homemade Ice Cream & Real Southwestern Barbecue” in this magazine back in May 1996, just over 25 years ago. The joy of making (and finding) good food never stops.