As expected, this variant of a popular breakfast meal includes a nod to other Pittsburgh food favorites. #PghHash 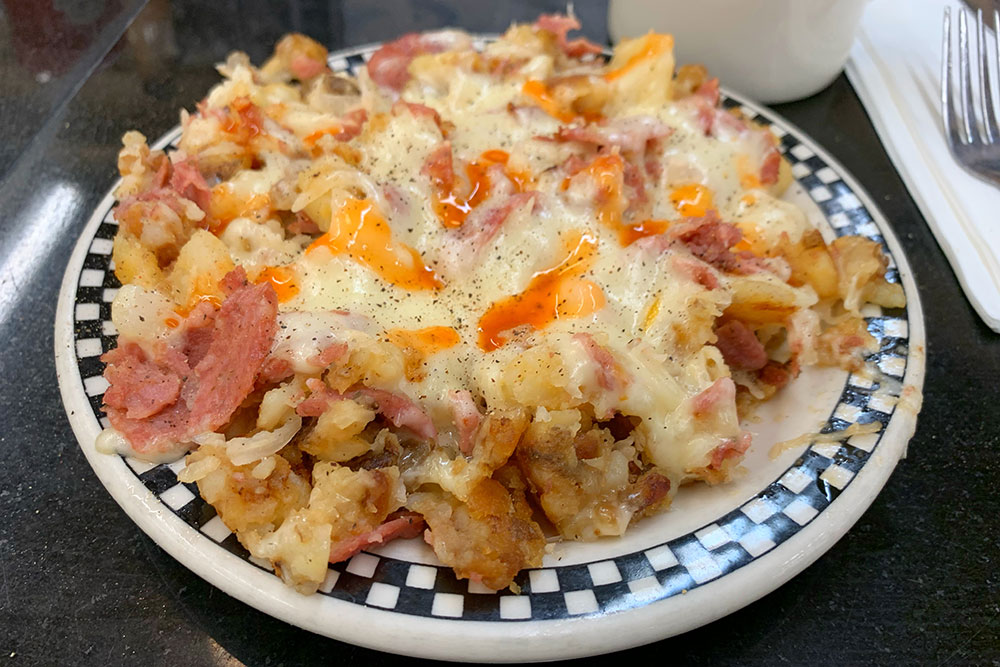 My mother occasionally served us corned beef hash for dinner when I was a kid. A mix of meat and potatoes, it was okay, but it came out of a can, and I feared it looked a bit like dog food.

As I got older and started going to diners, I learned that corned beef hash could be made in various ways and was often very good. It has history back at least to the 14th century, and the word “hash” comes from the French verb “hacher,” meaning “to chop.” Hash became a wonderful option for breakfast, and I order it often. 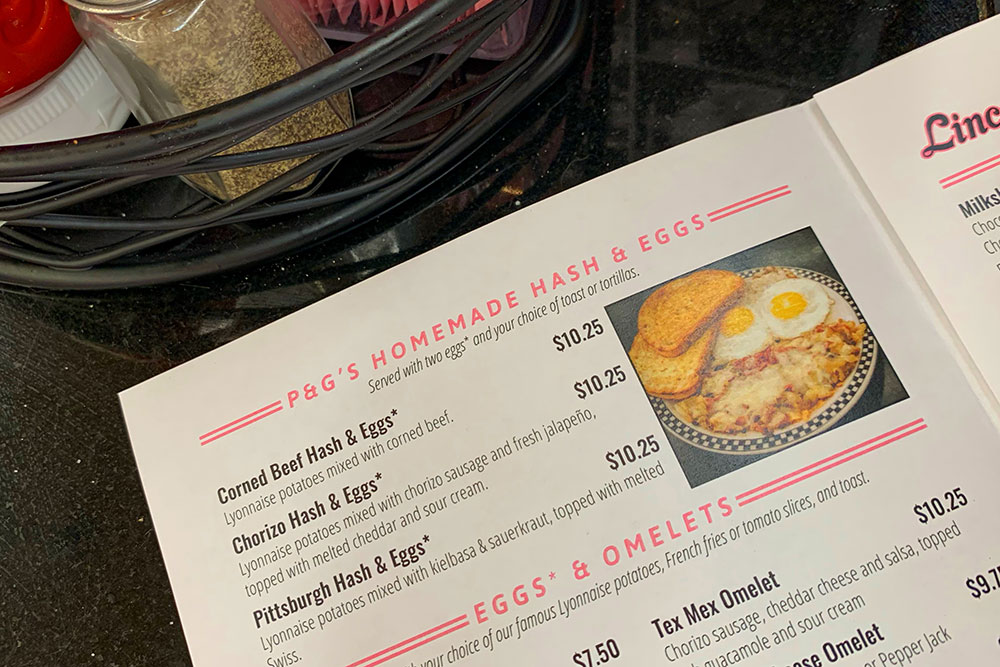 Earlier this year, as people started going out to eat again, I stopped for breakfast in Millvale at the Lincoln Pharmacy’s P&G Diner, and I noticed that the snazzy new menus offered three hashes: Corned Beef Hash, Chorizo Hash, and a new variant called Pittsburgh Hash. I can’t remember if it was Ely the waiter or Amanda the griddle-cook who told me the latter used to be a special, usually on weekends, but now was a regular item on the menu. 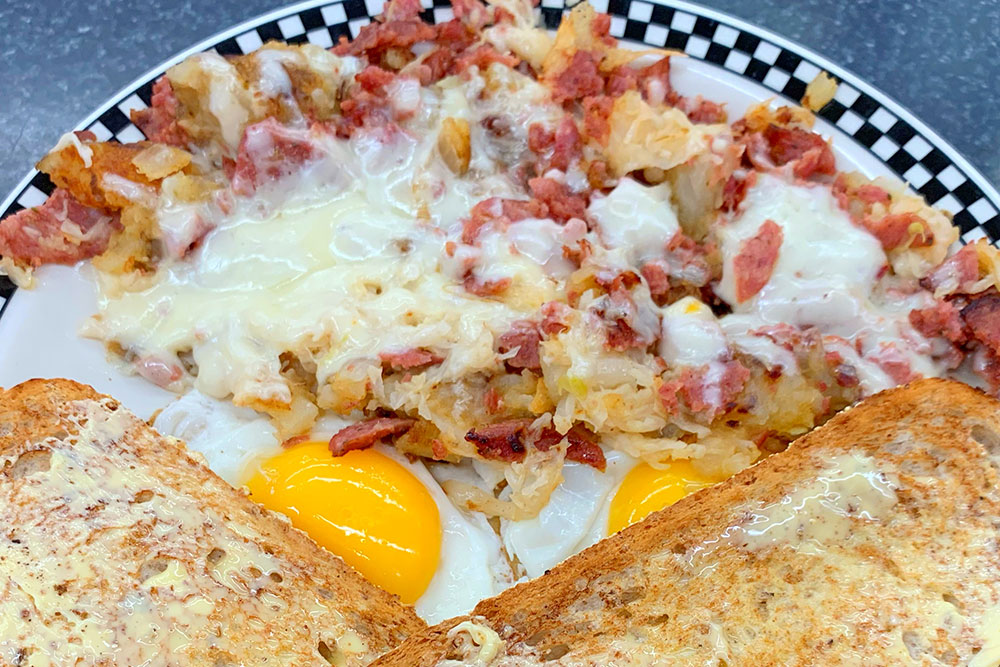 This local hash mixes some of the famous Lyonnaise potatoes that you can get at all six locations of Pamela’s Diners (aka P&G Diners) with kielbasa and sauerkraut, all topped with some melted Swiss cheese. I found it immediately delicious, perfect with two sunny-side-up eggs. I especially liked that the kielbasa was very thinly sliced, what we locals might call “chipped,” with a nod to the old Isaly’s dairy stores that once thrived around here. Chipped kielbasa was immediately recognizable as a profoundly Pittsburgh ingredient.

I wasn’t sure how the Swiss cheese fit in as a local topper — although the Isaly’s family was originally from Switzerland, and they sold lots of cheese as well as chipped ham and skyscraper cones — so I called Pam Cohen, Pamela herself, and asked, “Why Swiss cheese on the Pittsburgh Hash?” She replied simply and succinctly, “Because everything tastes better with cheese on top.” And she confessed maybe she thinks too much about food and good combinations, saying, “There’s Swiss cheese on a Reuben sandwich, and that works really well. I had confidence in this one.” 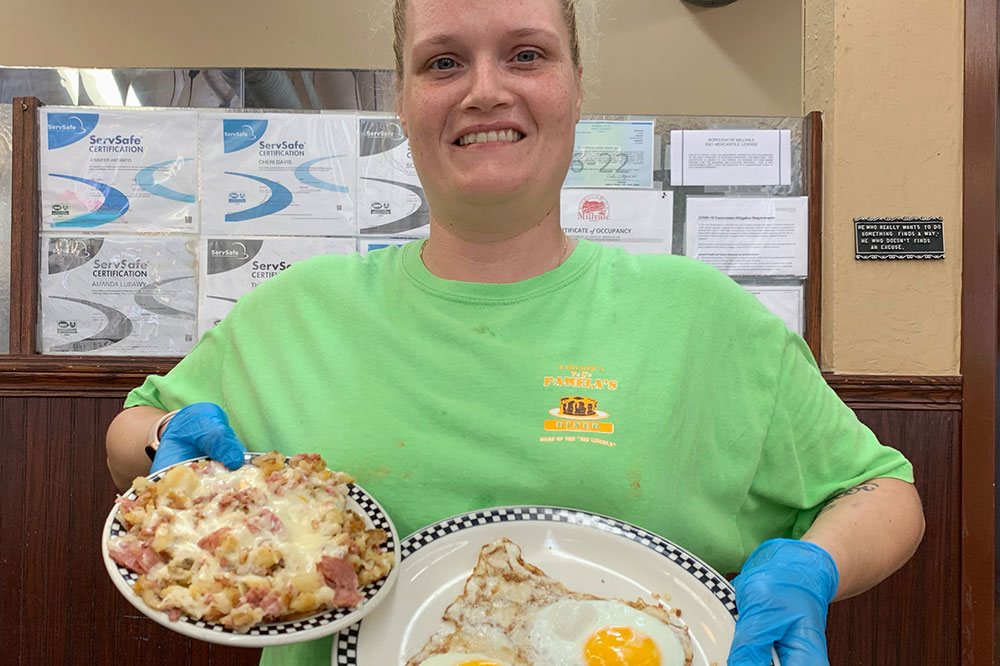 It all makes for a tasty breakfast with a distinctly Pittsburgh twist. Look for it in all of the Pamela’s Diners, often on the menu, sometimes still a special in some locations.