The owners of the Bloomfield vegan eatery introduce a limited run of whole sunflower heads that you can eat like corn. 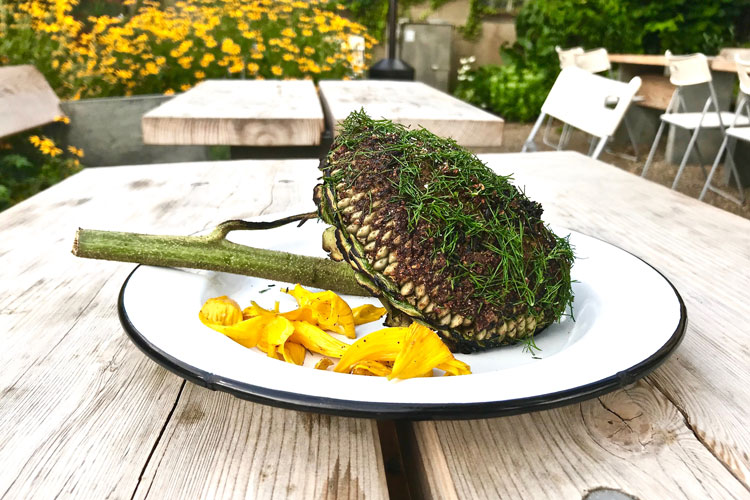 When Tomasz Skowronski, co-owner of Apteka in Bloomfield, was a kid, he’d sit outside farmers markets in Warsaw holding a whole sunflower, plucking the seeds one-by-one into his mouth before spitting out the shells. While that’s common practice for children — and adults who want to feel like kids — in eastern Europe, we tend to approach the sunflower differently in the United States. Here, our sunflowers landscape gardens as towering, pollinator-attracting stunners or are eaten as salty seeds shoveled to our mouths by the handful from plastic packets.

You can have a different — and, as far as I know, unique, at least in the United States —experience at Apteka, where Skowronski now has translated his childhood memory into what might be the most striking, of-the-moment (and, well, very Instagramable) plant-based dish around: a whole-roasted immature sunflower head that diners can eat like corn on the cob.

After unsuccessfully experimenting a bit with the idea last year, Skowronski and partner Kate Lasky turned to Todd Wilson of Tiny Seed Farm in Allison Park to grow the right type of sunflower which would be harvested when the plant’s seeds are formed but not yet encased in a hard shell. “Todd was determined to find the right ones. He was pulling them at every stage,” Skowronski says.

Wilson harvests the sunflowers while the crown still is ringed with its vibrant golden petals, the growing seeds yet to be exposed to the sun. “They're still covered in flower buds, so it's like plucking feathers off a chicken. And then you get these nice white kernels underneath,” Skowronski says.

Once its “feathers” are plucked, the sunflower head is rubbed with smoked chili oil and charred over an open burner for four minutes, partially cooking the tender seeds. The heads are dressed with a paste of roasted and dried cabbage, toasted sunflower oil, a touch of garlic and burnt coriander, and then dusted with fresh dill. 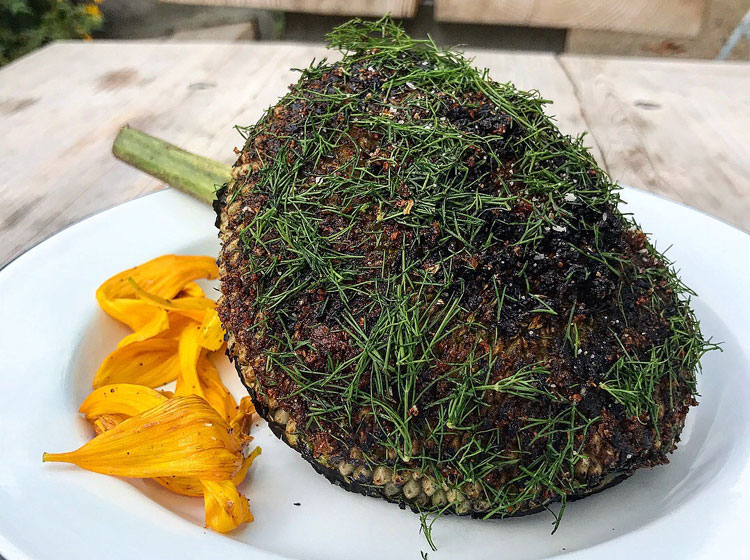 It’s impressive to look at and a lot of fun to eat.

Approach the sunflower as you would an ear of corn. Pick it up with two hands and start on an outer edge, where the seeds are most tender. You’ll taste sunflower, somewhat, but the dominant flavors are dill, cabbage umami and roastiness. The dish could benefit from a (plant-based; Apteka is a vegan restaurant) piquant, creamy dressing, which would help add body and tartness to the experience. This’ll make it a bit messier to eat … but when you’re face-deep in what might be the only immature whole sunflower on any menu in the country, you won’t really care.

Sunflowers are served nightly in limited quantities, so get there early if you want one.