An Impressive Duck Lands at Spork in Bloomfield 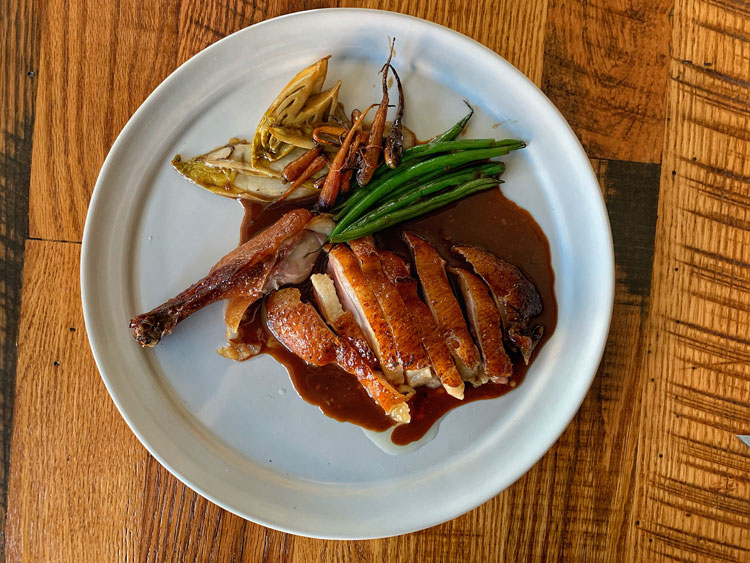 Throughout the country — most notably at restaurants such as The Grill Room in Manhattan — old-school Continental dishes and tableside service have made a comeback. Spork executive chef Chris Frangiadis took notice of the trend and, as it happens, also recently found himself asking, “How do I make a better duck?”

“I knew about the presses, and I knew that almost no one was doing a dry-aged duck,” he says.

This week, Frangiadis added a sophisticated tableside duck dish to the menu of his Bloomfield restaurant: canard à la presse.

Canard à la presse, or pressed duck, is a culinary tradition that began in Rouen, France, and was popularized in the 1880s at La Tour d’Argent in Paris. It’s had a couple of eras of peak and decline; it mostly has been absent from restaurant menus for the last few decades as it’s a complex and quite decadent dish. To prepare it, whole ducks are seasoned and roasted, and then the breast, leg and thigh meat are carved from the carcass, which then is inserted into a 2-foot-tall, weighted press that resembles a potential torture device; turn the screw to crush the carcass and release the precious juices.

Frangiadis found a French-made press at a vintage store in San Francisco; the exact date of manufacture is unknown, but it likely is from the 1950s. His ducks come from Joe Jurgielewicz & Son, Ltd., a fourth-generation duck farm in Shartlesville, Berks County. Frangiadis dry-ages the duck for more than two weeks prior to rubbing it with salt and mango-scented, lacto-fermented honey and then roasting the bird for 30 minutes; he’ll finish the breast and the leg separately prior to service. “Because we’re dry-aging it, there's a real intensity to the meat. And there's a lot of tenderness,” he says, noting that the breast loses about half its size during the aging process.

In a test run two weeks ago, Frangiadis heaved and strained as he pressed down on the carcass; operating the press is a feat of strength. Eventually, a slow trickle of thick, mahogany juice and delicate, shimmering fat began to flow from the spigot. Once finished, he had about a cup of it, which he added to a base of duck and veal stock reduction, Grand Marnier, Madeira, red burgundy, shallots, lacto-fermented plum water, lacto-fermented honey and koji water, plus a large pat of butter for good measure.

At Spork, the dish is served in two courses. The first course is the breast, ridiculously tender and funky in the right way, with crispy skin and a thin layer of fat adding depth of texture and flavor. The sauce is resonant in its intensity — I umami-joy fist pounded the table several times — yet offset with enough fruit and acidity to allow me to remind myself to stop hoovering the duck and slow down so that I could appreciate the complexity of the dish. It comes with roasted vegetables and kamut arancini with goose prosciutto and truffle cheese. The second course is a puff-pastry galette filled with shredded thigh meat that’s mixed with cooked mushrooms and lacto-fermented plums. Here, the sauce infuses powerful richness into the already flavorful meat and mushrooms; the plums provide necessary bright contrast. For good measure, the drumstick is served alongside the galette — it’s easy, delicious eating.

While there are some nice of-the-moment elements in the plating and the accoutrement, Spork’s rendition of canard à la presse respects the history and old-school tradition of the dish. The tableside duck service for two cost $125 and must be reserved online, which can be done as late as 11 a.m. the day of the reservation.