A Unique Honor for the King of Dukes

Duquesne basketball legend Chuck Cooper broke the NBA’s color line in 1950; next year, he’s getting a posthumous, one-of-a-kind honor at his former campus. 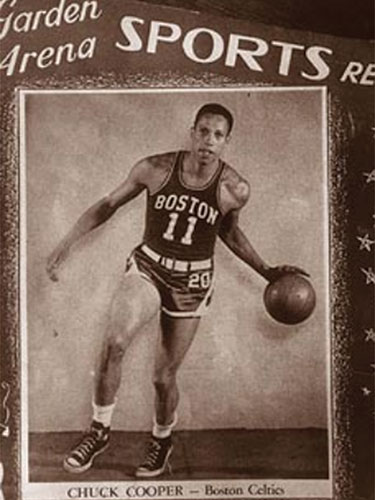 In the first few seasons of the National Basketball Association, there were no African-American players. That changed in a moment at the 1950 draft, when the Boston Celtics drafted Chuck Cooper — a Pittsburgh native who played at Duquesne University.

The son of mailman Daniel Cooper and schoolteacher Emma Cooper, Charles Henry Cooper undoubtedly learned to play on courts in and around Homewood, where he grew up. He first attracted serious attention, however, when he played for Westinghouse High School in the early 1940s. In his senior year, Cooper led the Westinghouse team to the City League title.

After serving in the Navy during World War II, the 6-foot-5-inch forward helped build the Duquesne University basketball team into a national powerhouse. Although most college athletics were racially integrated long before professional teams, there were still conflicts; in the first postwar season, the University of Tennessee refused to play Duquesne because they had Cooper on the team. Duquesne and Coach Charles “Chick” Davies wisely refused to play without him.

Cooper scored 990 points over his four seasons with the Dukes, setting a school record. He led the team twice to the National Invitational Tournament and graduated with a bachelor’s degree in education.

After he left Duquesne, Cooper briefly played for the Harlem Globetrotters. Then came the NBA draft; Boston selected him in the second round. After the choice was announced, someone callously pointed out to Celtics owner Walter Brown that Cooper was “colored.” Brown famously retorted, “I don’t give a damn if he’s striped or plaid or polka-dot, Boston takes Charles Cooper of Duquesne!”

Two other African-Americans joined the NBA that year. As Cooper pointed out to Pittsburgh Magazine in a 1976 interview with writer Lee Gutkind, “I wasn’t alone, didn’t have to take the race-baiting and heat all on my shoulders like Jackie Robinson.” Segregation still caused constant problems for black athletes, however — and not all fans were happy to see players of color.

Cooper was frank about the ways he was limited as a professional player. “No black superstars were permitted in basketball then,” he said. “White management couldn’t afford it because they knew white spectators wouldn’t put up with it. You had to sort of fit in, if you were going to get in, make your contributions in a subordinate role.”

He persevered. Cooper played 409 games (with a 6.7-point average per game) in the NBA for Boston, the Milwaukee Bucks and the Fort Wayne Pistons. He was playing with the Harlem Magicians, a barnstorming team, when a car accident ended his career.

Cooper went back to school, earning a master’s degree in social work in 1960 from the University of Minnesota. He later became the city of Pittsburgh’s first African-American department head, serving as director of parks and recreation under Mayor Pete Flaherty. Cooper died from liver cancer at age 57 on Feb. 5, 1984.

Next year, his alma mater will honor him by renaming its basketball facility, currently the A.J. Palumbo Center; after an extensive upgrade, the building will be known as the UPMC Cooper Fieldhouse. This month, he also will be inducted into the Naismith Memorial Basketball Hall of Fame — an overdue honor.

This article appears in the September 2019 issue of Pittsburgh Magazine.
Categories: Rick Sebak