Artist Rafael Domenech’s new installation at the Carnegie Museum’s outdoor Sculpture Court is meant for the public to make it their own. 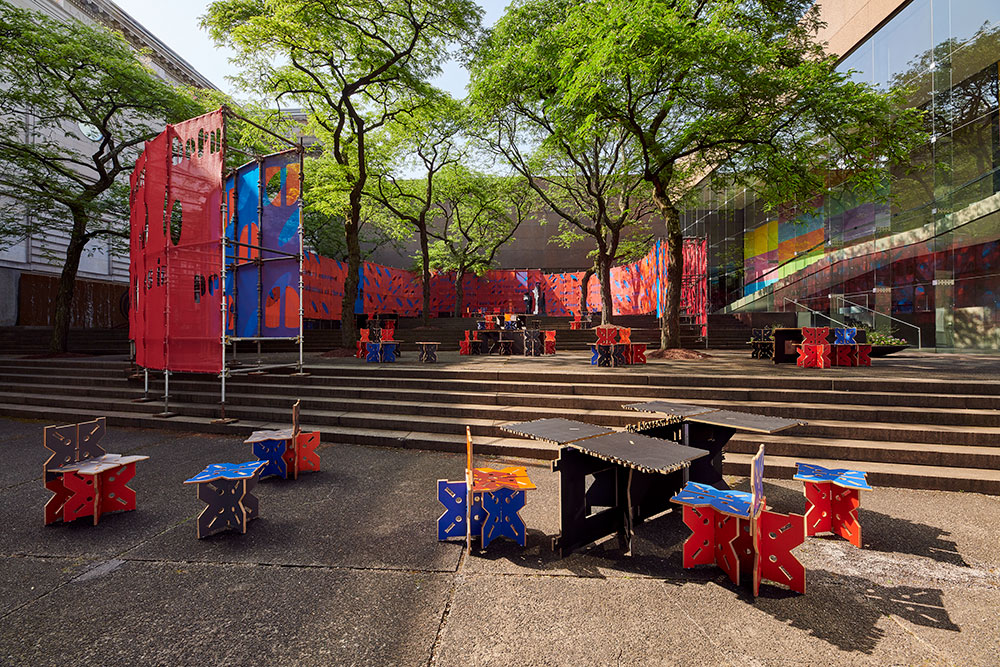 INSTALLATION VIEW OF RAFAEL DOMENECH, DIVIDING AN EDGE FROM AN EVER (PAVILION FOR SARDUY) AT CARNEGIE MUSEUM OF ART, 2022, PHOTO: SEAN EATON

At “Inside Out,” the Carnegie Museum of Art’s annual outdoor summer celebration, you’ll find music, food trucks … and a pavilion made of construction mesh.

As part of the prestigious Carnegie International, the museum’s outside Sculpture Court has been reimagined by Rafael Domenech, a Cuban American artist who has built a pavilion from construction mesh and scaffolding. The materials, he says, are a nod to urbanization.

“I’m interested in critical discourse or the discourse around the city, as it pertains to the last 100 years. I’m interested in processes and materials that intersect and are dissected by the city. So, that means stuff like scaffolding and construction mesh,” he says.

Domenech explains that the process of creating the pavilion was a part of a three-year conversation with the curator of the Carnegie International, Sohrab Mohebbi, and Domenech’s prior work on a pavilion for the Socrates Sculpture Park in Queens, New York.

“This project kind of was like a continuation or an evolution … we wanted to explore an architectural structure that would be not just a site but also some sort of publishing mechanism or interface to insert some content into space,” Domenech says.

Once a space becomes public, he explains, it has to adapt to the public’s needs. “It has to be multidisciplinary. It has to allow the public to participate either by being part of it or modifying it through time.”

Domenech says that he has no particular goal for what the public will take away from his work.

Domenech also shies away from putting any labels on the genre and medium he works in, instead focusing on how it relates to other artists’ and writers’ ideas and the location of his work.

“I don’t have a specific medium, so it’s always hyper-responsive [to] ideas, things that I’m reading and the site that I’m trying to utilize for the work,” he says.

Over time, the pavilion will develop further. As a part of “Inside Out,” Domenech is leading art-making sessions for attendees. Prior to every session, he edits the piece, adding new layers of materials to the pavilion.

A key part of this change comes in the form of colors. The pavilion as it was first erected uses blue and red, but Domenech intends to layer material of different colors to create new shades. “I realize that when light hits the surface, the colors merge, so if you overlap blue and red it gives you violet. You realize that by starting to overlay the layers, you start to have a larger spectrum,” Domenech says.

There’s a nod to poetry in the piece’s title, “Dividing an edge from an ever [pavilion for Sarduy]”. The title is in reference to a Cuban poet and author, Severo Sarduy, whose work has influenced Domenech. Sarduy, Domenech explains, posited that the ellipse is a physical representation of an exile. As a result, the pavilion is elliptical.

“It is a geometrical shape that doesn’t quite have a center; it is decentralized because it has two centers. The way I see it, the idea is that it’s a shape or geometrical form that is entangled in two places. It’s the true representation of an exilee,” Domenech says.

Domenech will lead art-making sessions at Inside Out at 1 p.m. this Saturday and again on Aug. 6. The events are free to the public; all ages are welcome. More information about Inside Out and the Carnegie International can be found here.