A Pop-Up Bar in Pittsburgh that Serves a Sober Alternative

Empath provides the vibe and social space of a bar, as well as stepped up beverage service ... without the alcohol. 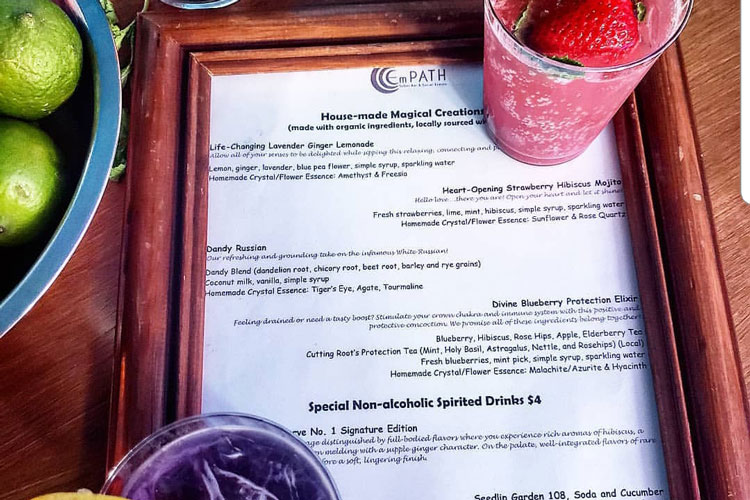 I was a few months into my first restaurant job when I heard a colleague describe their work as a bartender. “My job is to throw a party every night,” he said.

At the time, it stuck with me as the perfect description of curated experience that chefs, servers and bartenders conduct every night. One that is designed to make the guest feel taken care of, relaxed and special for the time they are in the establishment. Yet for those throwing a nightly party, it can be easy to get carried away.

Surrounded by food, spirits and a celebratory environment while also working long, irregular hours filled with physical labor, many turn to alcohol and other drugs as ways to self-medicate. In the wake of the deaths of industry greats like Anthony Bourdain, who was open about his struggles with addiction and depression, many in the restaurant industry are calling for continued changes in the internal culture that would support those who are struggling.

Curtis Gamble, chef/owner of Station in Bloomfield has been open in his social media channels about his experiences with sobriety within the restaurant industry. He'd like to see a shift from the binge drinking culture to something more healthy. However, he doesn't necessarily think that more traditional interventions like Alcoholics Anonymous work well for people in the restaurant industry and believes that addressing the underlying problem of normalizing daily alcohol consumption might be a more effective approach.

“People who are saddled with addictive personalities, they all buzz at their own frequencies. I think a one-size-fits-all solution to people’s sobriety is really difficult,” says Gamble.

For Gamble, getting sober in an environment where alcohol and it’s daily consumption were highly available was challenging. “I’m surrounded by people who weren’t going to tell me no,” he says.

Those same people that weren’t going to bat an eye at one more drink were often the ones that Gamble felt he owed more to. “I cared a lot about the people around me. I was doing a disservice to people that worked for me. They weren’t getting the culture they deserved or that I wanted them to have,” he says.

Availability isn’t the only cause that Gamble identifies as a contributing factor. Pittsburgh and many other Rust Belt towns are still steeped in blue-collar history and culture. After a hard day of physical labor, drinking is an accessible and relatively cheap way to address body aches and pains. In the case of restaurant workers who often get out after almost everything else has closed, bars offer a place to wind down and socialize. “Working a second shift anywhere. What do you do afterward?” says Gamble.

Restaurant industry personnel in a handful of cities across the country are starting to recognize the need for third spaces that provide the vibe and ease of a bar without the alcohol. Carolyn Hilliard and Donny Donovan of the Pittsburgh band Dinosoul wanted to bring this concept to Pittsburgh, and were inspired by a visit to Sans Bar, a sober pop-up bar and music venue in Austin, TX that serves alcohol-free beverages. They launched Empath, a sober pop-up bar, which hosted its first happy hour in the last week of June. “There’s really not many safe places for people who want to live a sober life or who are in recovery to feel included in the social scene,” says Hilliard who’s been sober for two years.

Even though Empath’s cocktails don’t include alcohol, the team has worked with a group of dedicated bartenders to develop special, carefully balanced drinks to help their patrons feel special.

“When you go out to the bar and say you want a non-alcoholic drink, most of the time you get some cherry syrup, soda and lime,” says Hilliard.

The Dandy Russian, a spin on a White Russian includes ingredients like dandelion root, chicory root and coconut milk. Empath also uses non-alcoholic spirits like Seedlip spirits created in London and Skarlet Private Reserve No. 1 which is brewed from the flowers of the roselle plant.

“I cried a couple time throughout the night hearing people’s stories when they came up to me … Even though you’re sober it doesn’t mean you have to stay in and only go to coffee shops or only rely on your meetings for community,” she says.

Editor's note: an earlier version of the story omitted Donny Donovan as a co-founder of Empath, and incorrectly mentioned the company uses Mingle Mocktails.