Realtor Brian Czapor is selling his own extensively renovated home. 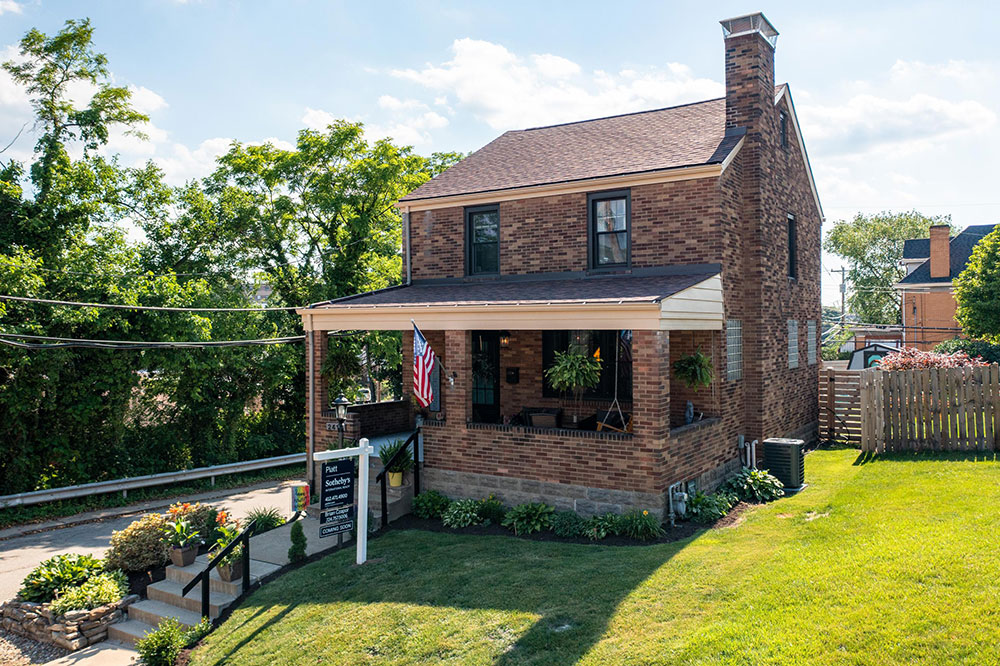 Piatt Sotheby’s Realtor Brian Czapor has seen a lot in today’s hot Pittsburgh real estate market. While many have had to downsize their real-estate dreams, others have been able to snag a dream house or speed up their plans a lot sooner than they planned — including him.

Czapor purchased his current home at 2414 Alwyn St. in Brookline two years ago. At the time, it was something of a fixer-upper.

“It had been on the market for six months, and I showed it to a client of mine,” he recalls. “I wanted to be in Dormont. I came back to the house. Then I really started to see the potential in it.” 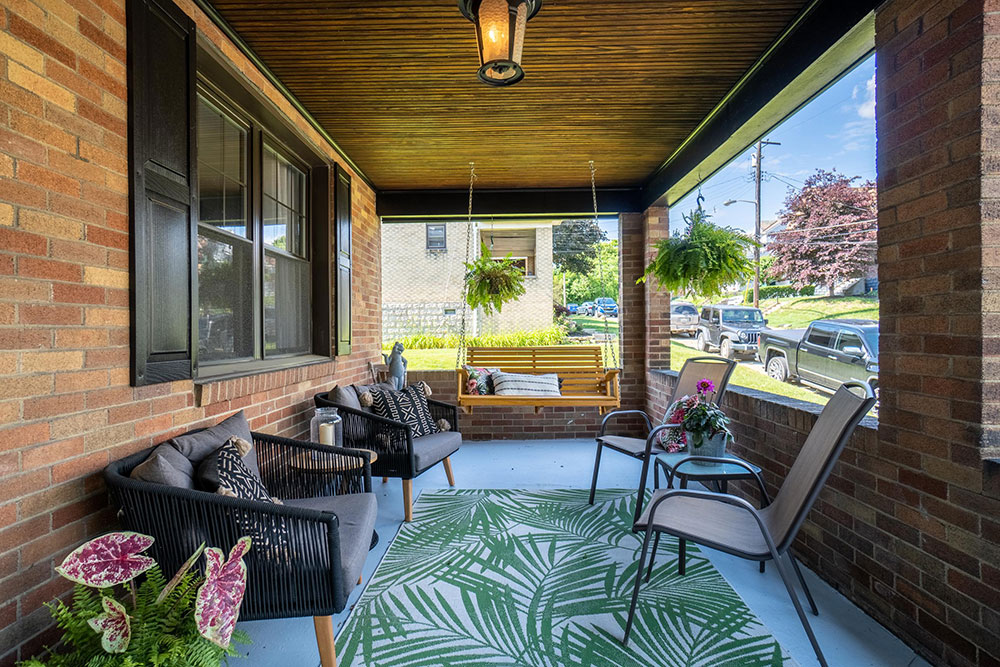 In the hands of its last owners for 20 years, the home retained many original features, including a lovely front porch, attached garage and Craftsman-style details. It also was located just a quick walk from Brookline Boulevard’s hidden treasure of a shopping district.

Czapor decided to make the leap into becoming its owner, putting together a five-to-seven-year renovation plan to transform the house. Then the COVID-19 pandemic hit — and he suddenly had a lot more time on his hands.

“I got toward the end of my project list pretty fast,” he says.

With that came the realization that he could sell his home and use its new market value to propel him closer to his dream of living in Lawrenceville. 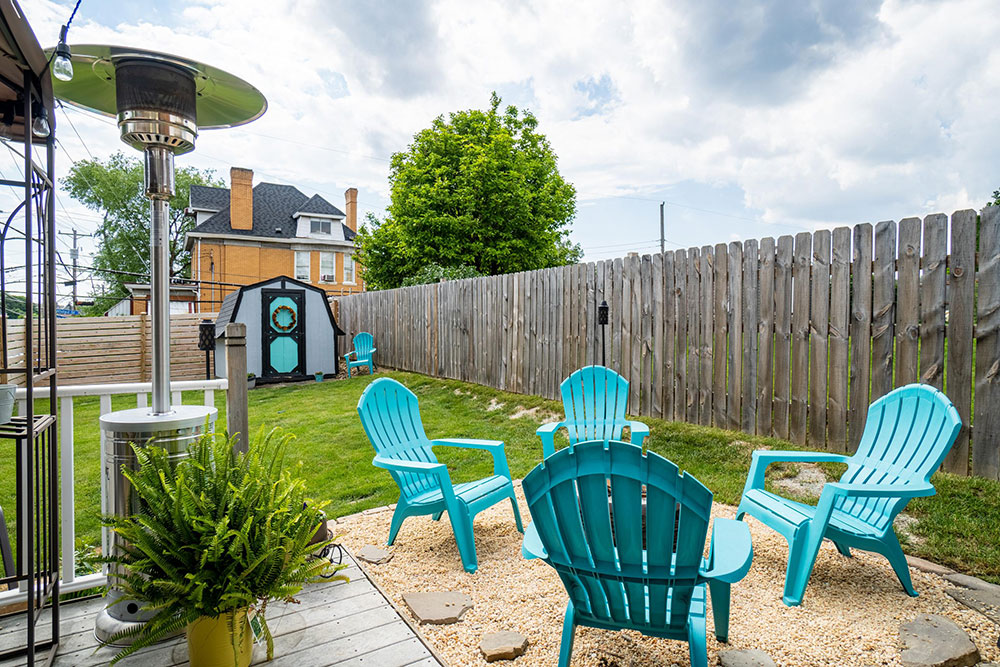 Landscape plantings and a new backyard exterior fence enhance the all-brick exterior. For fencing, Czapor opted for a more modern design, with horizontal boards surrounding the perimeter. He also added a neat pea-gravel sitting area with a firepit and a handsome gazebo for outdoor entertaining.

With that done, he turned to the interior.

“This home had an original galley-style kitchen. It was tight and cramped,” he says. “I love to entertain and wanted an open concept.” 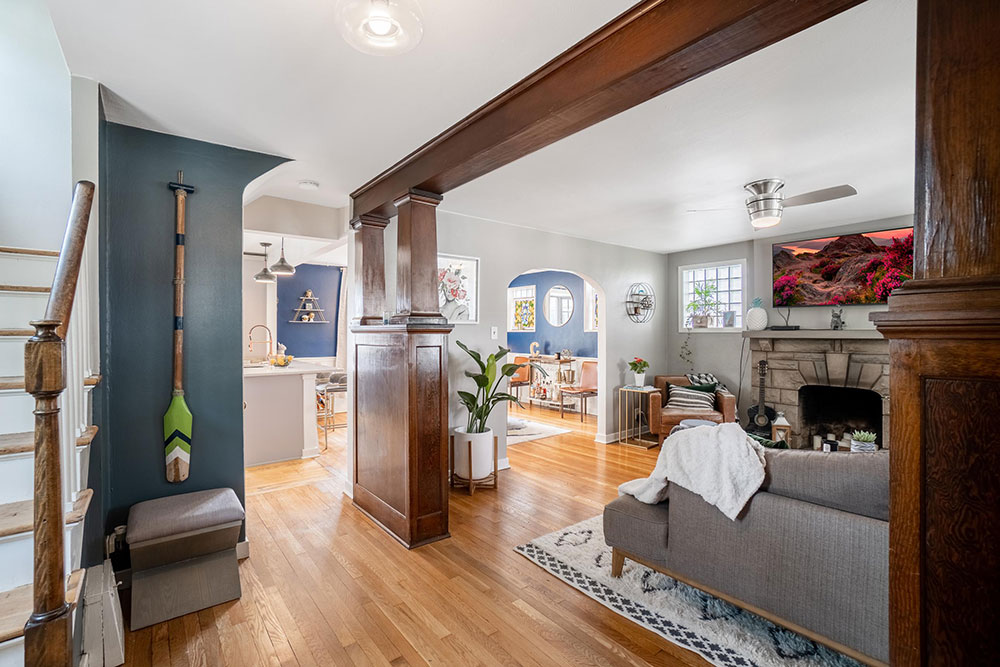 He took down the wall between the dining room and kitchen, leaving the original Craftsman’s beams to show off in the new natural light. He kept the arched opening between the dining and living room, where a stone fireplace takes center stage.

The newly combined dining room/kitchen gained an island and much more. The sink and dishwasher were moved to the island, which features a brass, commercial-style faucet nestled into a sea of white quartz counters. 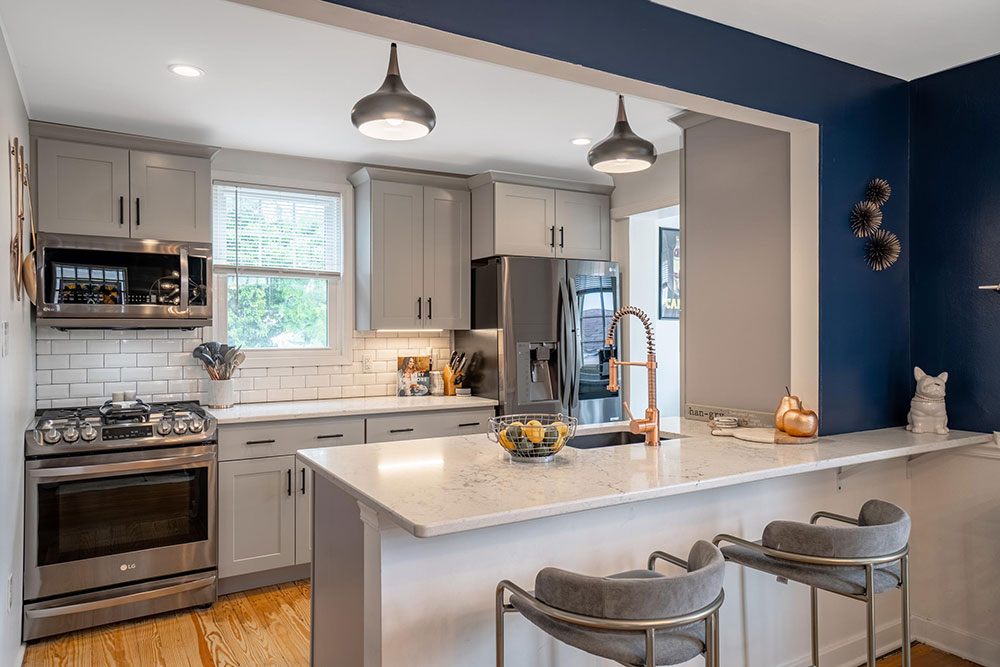 A brass Sputnik-style light fixture hangs over the dining room table, accenting the rich, navy-colored walls. Underneath all of this are refinished, original hardwood floors. 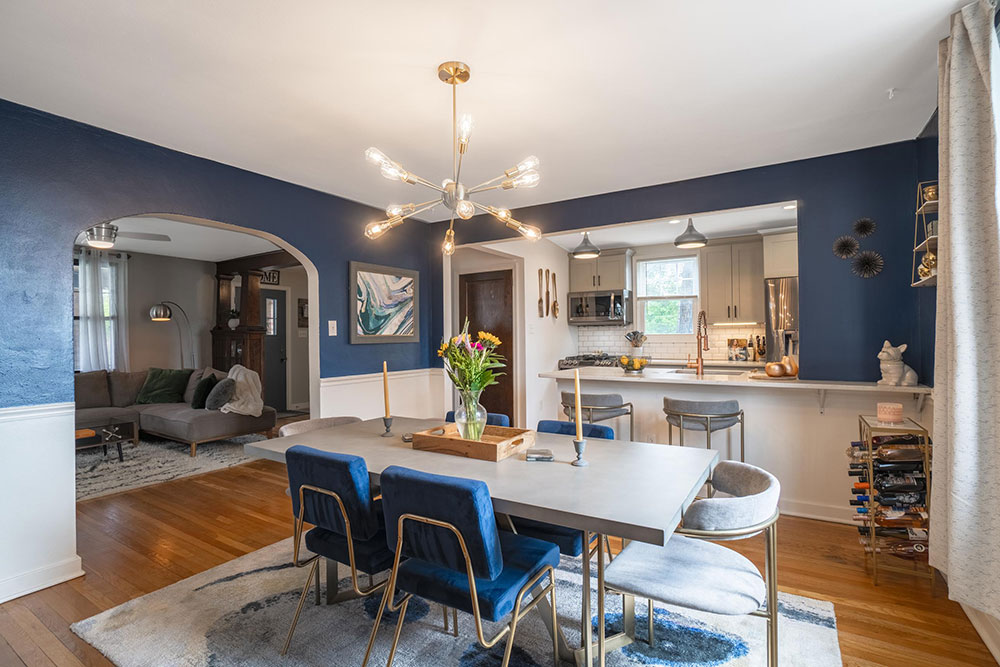 Czapor also transformed a bonus mudroom into a breakfast room; this cute space now wears an Encaustic tile floor. More shaker-style cabinets run underneath the window, and there’s a beverage refrigerator to round out the amenities.

In the entry, the original spindle staircase takes you to the second floor, where there are three bedrooms and a fully renovated bathroom. 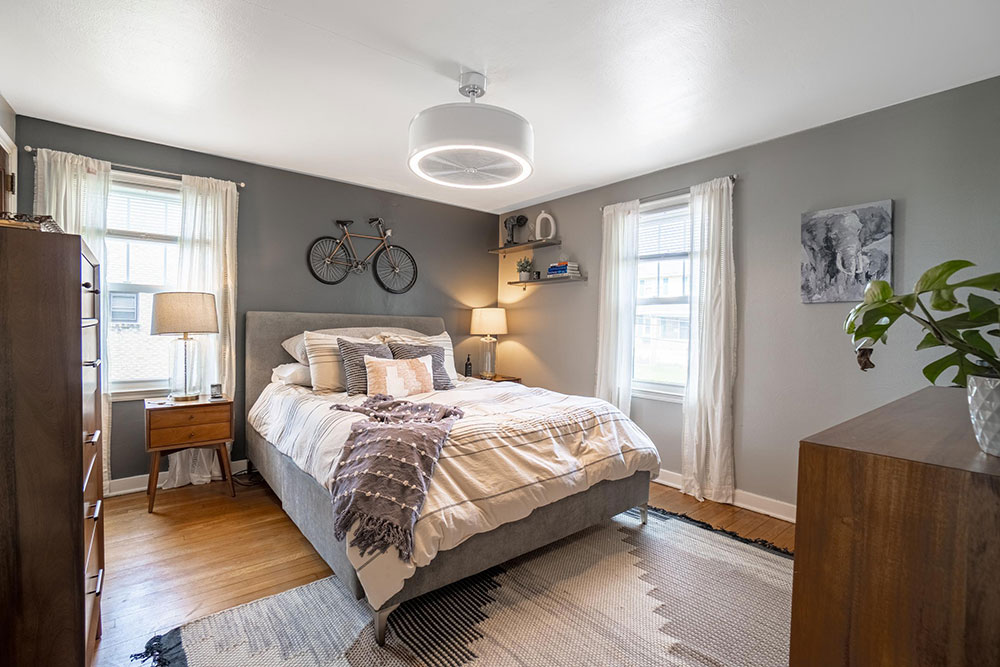 The bedrooms are painted in gray tones. The smallest of the three was made into an office, dotted at its center with a gold light fixture. In the guest bedroom, lively artwork and a rug make it a welcoming respite. The primary bedroom has a cage-style ceiling fan and Mid-Century Modern accents. 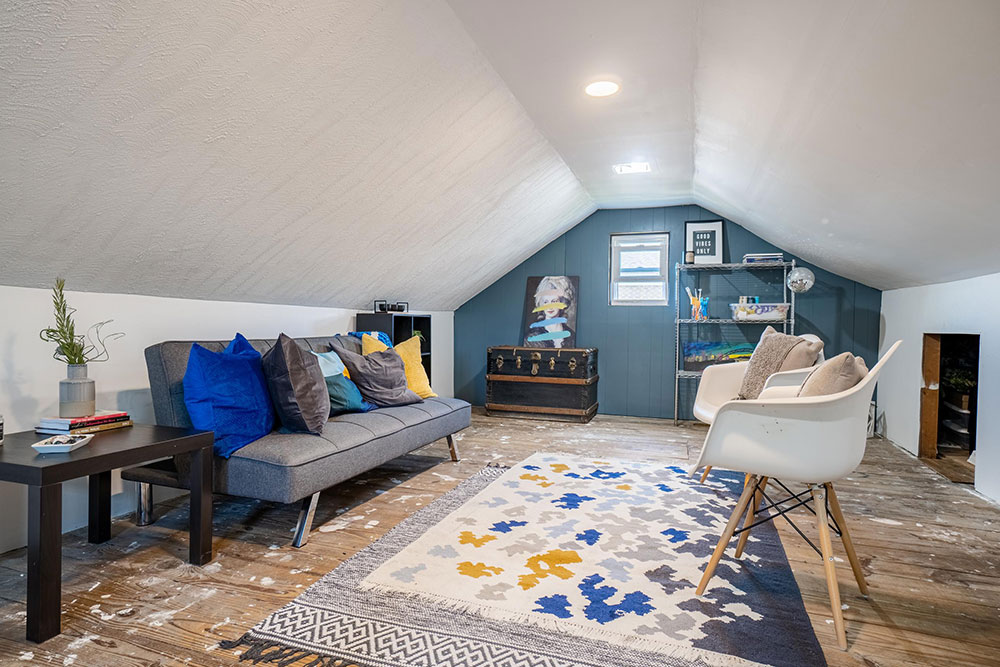 The third floor, which has crawl storage space, was renovated into a creative area for art. An accent wall is painted cobalt blue and new LED lights illuminate the fun place.

“It was carpeted and paneled. I painted and ripped the carpet out,” Czapor says. “The floor had a cool speckling, so I decided to keep it.”

The basement received a nice renovation as well.

“It was a concrete, classic Pittsburgh basement with a Pittsburgh-style toilet, shower and laundry room,” Czapor recalls. 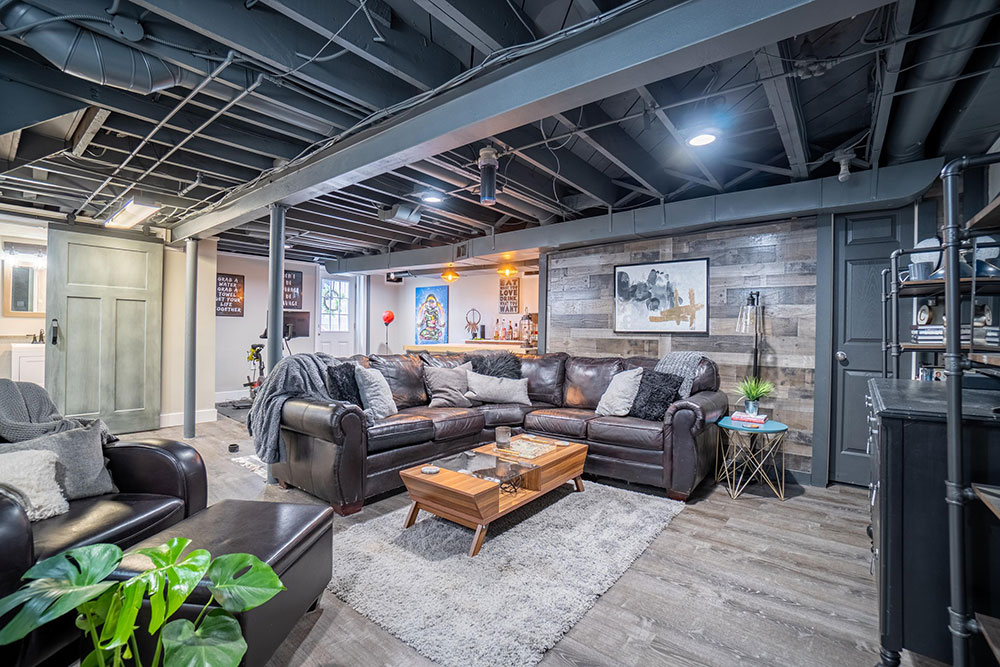 Czapor added luxury vinyl planks on the floor and to a feature wall. The ceiling was sprayed charcoal black. He also added a bar, an exercise area, a full bathroom and a laundry room. The home’s other upgrades include a new roof and new windows the previous owner installed.

Czapor says he has loved his time living in Brookline.

“It has brought so many things to me: The boulevard, the local business owners — everyone remembers your face,” he says. “It has a Pittsburgh-friendly feel, and my neighbors are the absolute best. We have porch drinks together, homemade salsa. It’s been nice.”

About: Brookline (brooklineconnection.com)
Population: 13,214
Planes, Trains & Automobiles: A 25-minute commute to the airport. Daily transport via the “T,” Port Authority, cars and bus. A 10-minute commute to Downtown. Street parking.
Schools: City of Pittsburgh, features extensive magnet programming including the award-winning CAPA in the heart of Downtown. (pittsburghschools.org)