When she arrived in 1917, Perle Mesta wasn’t crazy about Pittsburgh. 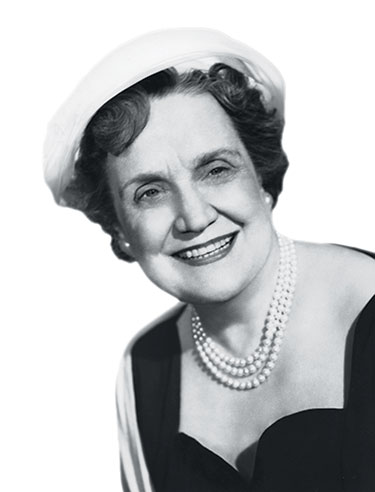 She had just married George Mesta, who founded the Mesta Machine Co. in West Homestead. “I was never really accepted in Pittsburgh society,” she later wrote in her autobiography. Society became her realm of expertise, however, and in the 1940s and ’50s she gained international fame for her parties.

How famous were her fetes? The phrase “the hostess with the mostess’” was coined to describe her.

She was born Pearl Skirvin in 1889 in Sturgis, Michigan. Her family soon relocated to Oklahoma City, where her father was a successful oil man and hotelier. She moved in 1915 to New York City with dreams of a singing career but met and was “immediately attracted” to George Mesta at a dinner party. Perle later admitted, “He really didn’t look or act like an older man, so I was seldom conscious of our age difference.” The multi-millionaire steel magnate, who was born on a farm in what is now Bethel Park, was 55 when they married; she was 28.

Remembering their home in West Homestead, she wrote, “George’s steel empire was a thrilling sight, spread over many acres on the banks of the Monongahela, but it wasn’t very pleasing aesthetically. Smoke and fumes poured forth and I wondered if I could ever get used to the murky atmosphere.”

Despite the unhealthy air, Mesta Machine was a crucial part of the city’s steel industry. The business often took the couple to Washington, D.C.; during World War I, while the plant was making naval gun barrels and other war machinery, George became a consultant to President Woodrow Wilson. Perle developed a love for the nation’s capital.

In April 1925, at age 63, George died at the Ritz-Carlton in New York City. With a gargantuan inheritance, Perle opted to find a new home away from western Pennsylvania.

Her parties in her adopted home of Washington, D.C., became legendary. “In an atmosphere of good food, music, and gracious women,” she explained, “differences sometimes can be settled or important matters of policy worked out.”

Her significant social skills — and her enthusiastic support of Harry Truman leading up to the 1948 election — led to her diplomatic appointment in 1949 as the United States’ Minister to the Grand Duchy of Luxembourg. Irving Berlin wrote the 1950 musical “Call Me Madam,” about a woman clearly based on Mesta. One song in the musical: “The Hostess with the Mostess’ on the Ball.”

While Perle worked in Luxembourg, she often stayed at the Hotel Metropole in neighboring Brussels, Belgium.
There, legendary bartender Gustave Tops concocted a drink in her honor. The beverage, with two parts vodka
to one part Kahlua, remains a
standard: the Black Russian.

After her husband’s death, she rarely returned to Pittsburgh. She paid a visit in 1947, when Margaret Truman, the president’s daughter, sang at the Syria Mosque. In 1956, she was the featured speaker at the Women’s Press Club of Pittsburgh’s annual awards dinner at the William Penn Hotel. When she died in 1975, her body was brought to Pittsburgh to be entombed beside her husband in his stately mausoleum at Homewood Cemetery.

This article appears in the January 2020 issue of Pittsburgh Magazine.
Categories: Rick Sebak