For Curt Wootton and Chris Preksta — and the zany characters they’ve created over the years — the sky's the limit. 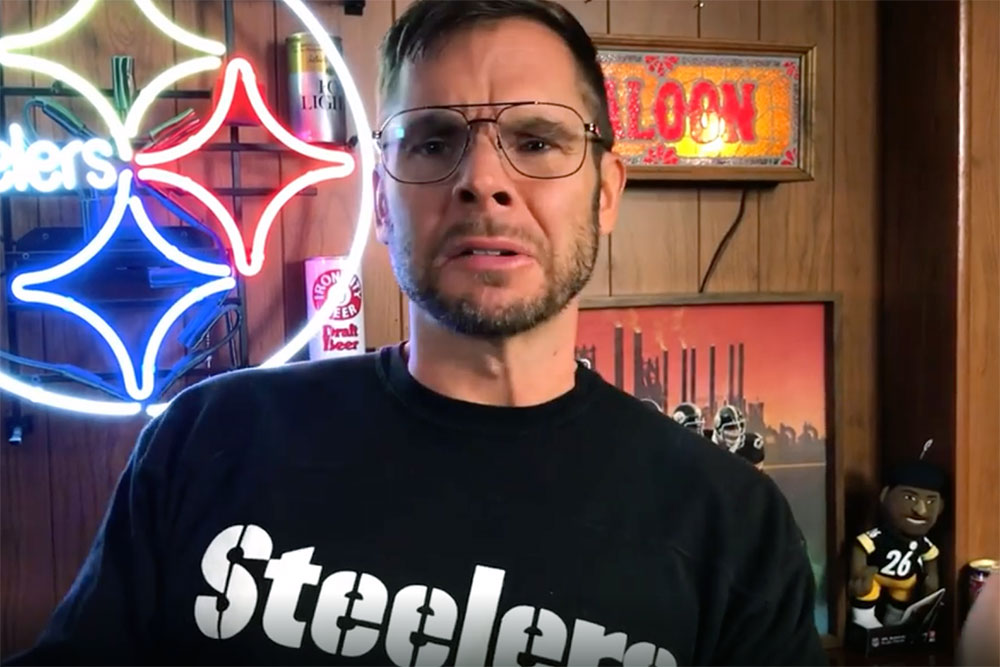 Ten years ago, Curt Wootton was living in Los Angeles with the hope of making it as an actor. But success found him closer to home instead; today, the Pennsylvania native is better known as Pittsburgh Dad, the titular blue-collar, “everyman” from the online sitcom he co-created with his friend Chris Preksta. The series, soaked in yinzer nostalgia and based on characters from Wootton’s and Preksta’s own lives, will celebrate its 10th birthday on Oct. 25 — and Wootton says it’s still going strong.

“If you look back at sitcoms, [for] the first couple seasons, the characters aren’t really fleshed out yet,” he says. “By Season 10, where we are, it’s a full-blown character.”

Back in 2011, Preksta had just gotten a new iPhone that boasted a decent camera, and when Wootton came from L.A. for a visit, the duo decided to test it out.

“I would always imitate my dad. I’d go into this little dad routine, and [Preksta] always thought it was funny, so he was like, ‘Let’s try this new iPhone camera out, go down to Goodwill, put together a little dad outfit, send it to our friends and family,’” Wootton says. “So we did a few sketches and put them all online … and it went a little Pittsburgh viral. It kind of just took off from there, and here we are.”

A decade later, “Pittsburgh Dad” has been watched by more than 104 million viewers and earned accolades from across the region. In 2012, then-Mayor Luke Ravenstahl declared Oct. 25 Pittsburgh Dad Day; Eat ‘n Park honored the show with a Smiley cookie in 2013; and in 2015, the duo published a Pittsburgh Dad book, which has garnered 4.6 out of 5 stars on Amazon.

“A decade goes by in the blink of an eye,” Wootton says. “Jeez, it seems like yesterday.”

“Pittsburgh Dad” was never something either thought they’d still be doing 10 years in. In fact, they expected it would last a year or so and then fizzle out; the duo had hoped to make it to the Halloween episode — about a year after the show began — but when Halloween rolled around, “Pittsburgh Dad” was only just picking up steam. Wootton moved back from Los Angeles, and the rest is history.

“It never really stopped, and it opened doors here and there,” he says. “It’s been awesome.”

Wootton became an actual father recently, too; his 2-year-old daughter is giving him ample opportunities to “method act.” Writing around her naps and the drop-her-off-at-Grandma’s schedule, Wootton says he’s been “getting some good real-life experiences to write more dad-type humor.”

“The [Pittsburgh Dad] character himself has three children, but they’re 8 years old, 11 years old, 15 years old, so we don’t have a lot of, like, toddler humor in our show,” Wootton laughs. “But as she gets older, I could totally see using more of the experiences with her in the show.”

Wootton lost his own father, Keith Wootton, the inspiration behind the character, when he died in February 2019.

The show started because Wootton and Preksta were self-described “Pittsburgh nuts.” Wootten ironically became more of a Pittsburgh guy while living in California and says when it comes to loving Pittsburgh, distance made his heart grow fonder. The show was a love letter to the city and to the people that called it home.

“There was the goal to make people laugh,” Wootton says. “The Pittsburgh guy character is a fusion of all the characters Chris and I grew up with, our families and our friends, especially my dad and his mom. So, [we wanted] to be as realistic to the Pittsburgh people as possible and make people laugh at themselves. I think that’s important. That’s kind of what we went for, and it’s grown.”

“Chris and I always say the same thing: When we film, when we write, we’re really generally just having a great time doing it and sharing it with people, reading comments, getting feedback, very kind emails

Everything fell into place, and as time fleshed out Pittsburgh Dad’s personality, the character has transitioned from a family-type sitcom to focus more on the city’s infamous sports culture — something sure to be familiar to anyone who has spent time around a die-hard Steelers fan. It also reflects more of Wootton’s and Preksta’s own humor now, too, highlighting the things that make them laugh.

Even after all these years, Wootton says they still have a great time filming the show and sharing it with people, too. Despite the internet’s penchant to attract vitriol, fans of the show have been generally kind, and Wootton enjoys reading comments and emails.

“It’s a place to come and laugh and share memories,” he says. “For that, we’re truly grateful.”

As for what the next 10 years may bring, Wootton is looking up.

“Whatever door just may open, we’re going to put our foot through and see what it is,” he says. “We’ve gone through so many different things with the character, and I think the sky’s the limit.”