After compiling our list of 25 great pies, we kept eating, eventually concluding that these six spots also serve noteworthy pies. 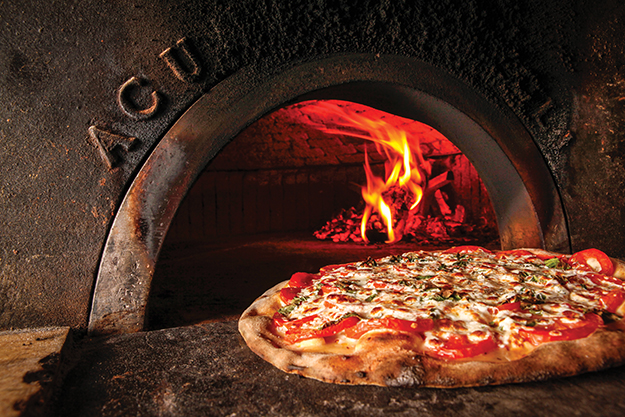 While discussing and planning our pizza feature, it was hard to not crave a slice (or two … or three). After weeks of deliberation, our restaurant critic, Valentina, agreed with us that the final list of 25 spots was stellar. But in a city chock-full of fantastic shops and eateries that dish out the cheesiest, sauciest pies, we didn’t think we could (or should) just stop at 25. Why not commend some more on their top-notch efforts to satisfy our hunger (and cravings)? Here’s our list of a half-dozen other fabulous spots — places that also dish out pies that are a cut above.

Vincent’s Pizza Park
Sure, we’re all continuing to mourn the loss of the Vincent’s on Ardmore Boulevard. But over in Plum and Irwin, the Vinnie Pie is still being served up, large and simple (with just three ingredients) — the way we like it. Slightly greasy (and oh-so-cheesy), the enormous pies are best eaten with utensils. Come hungry; leave happy.

Gluuteny
Known for sweet treats like whoopie pies and snickerdoodles, Gluuteny can draw a crowd. But instead of just picking up gluten- and casein-free treats next time you visit, why not get something savory, too — like the (soy-free) vegan pizza? The 12-inch round pie, topped with vegan cheese, is pulled straight from the oven and handed to hungry customers. It’s feel-good pizza — after all, how could you feel guilty after devouring a few slices of a fresh pie with only plant-based ingredients? Exactly.
1923 Murray Ave., Squirrel Hill; 412/521-4890, gluuteny.com

Papa J’s
Most locals know that Papa J’s Centro, situated along the busy Boulevard of the Allies, is a haunted yet cozy joint. But don’t let that outshine the cuisine, for the Italian offerings — namely the pizza — deserve some attention. Specialties range from the delectable barbecue-chicken pizza to the classic American-Italian style Margherita. With six- and eight-cut options, you’re bound to get the right amount of slices (but leftovers are great, too). Papa J’s sister establishment, the Ristorante, dishes out the same fare over in Carnegie.

Pietro’s Pizzaria
What can we say? For the past decade, the old-school approach of Pietro Servagno (plus his wife and two sons) has impressed us each time we’ve had a hankering for Italian-style pizza. On a drizzly weeknight, when there’s not much time to cook (or anything decent, for that matter), the Servagno crew pulls through with homemade traditional pies, which are topped with garden-fresh veggies in the summer. Not in the mood to pick up your pie? Pietro’s delivers (yes, that was music to our ears, too). Either way, you’re gonna love it.

Pi Coal Fired
Yes, we have traditional and wood-fired pies here in Pittsburgh. But many don’t know that coal-fired is also an option. Nestled in a partly converted nightlife lounge, Pi is serious about its Neapolitan-style pizzas. Having an undeniable coal flavor, the thin-crust pizzas are large enough to eat on your own if you’re really hungry — but it’s more fun to share more than one between friends. Solid picks include the flavorful Diavola, crowned with spicy Italian salami, and the classic Margherita — or the create-your-own option works just as well.

Luciano’s
It may not look like much on the outside, but Luciano’s truly delivers. With a list of hand-tossed pies ranging from traditional pepperoni to Greek to Florentine, there’s something for everyone. Comprising homemade dough and an abundance of cheese, the slices are great alone or with cheese sticks and dipping sauce. Be sure to pick up a six-pack with your order; you might as well wash down your grub the old-fashioned way.

Did we still miss your favorite spot? Tell us about it below in the comments section.