A Bureaucratic Boondoggle and an Unexpected Flight

Delays in completing the “Bridge to Nowhere” led to a bizarre — but, shockingly, harmless — accident. 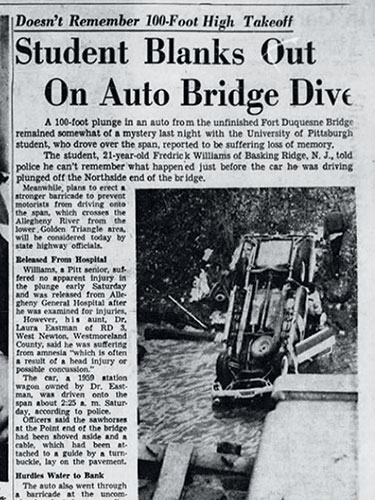 Pittsburgh’s unfinished “Bridge to Nowhere” was finally linked to the North Side 50 years ago, on Oct. 16, 1969, after spending most of the preceding decade as a punchline. But two people didn’t find it the least bit funny.

One was the man who designed it — only to see his crowning project turn into a symbol of bureaucratic ineptitude. The other drove off the end of it. Though he miraculously survived, he would spend the rest of his days hounded about his fateful plunge into a muddy riverbank.

Engineer George Richardson was the obvious choice to design the Fort Duquesne Bridge. He had drawn up most of the region’s major spans, including the West End, Fort Pitt, Highland Park, Homestead, McKees Rocks, 10th Street and Westinghouse bridges. When his 160-person firm moved into offices in a gleaming new Gateway Center building, he made sure his corner office on the 14th floor had a commanding view of the Fort Duquesne Bridge construction site.

Work began in 1958. But as the span stretched across the Allegheny River, opposition mounted. Richardson’s plans, at first backed by the state, called for blasting away Monument Hill at the northern approach and building a highway through West Park. With the North Side already undergoing a full-blown urban renewal project, concerned citizens (and, eventually, city hall) demanded a diversion along the North Shore. Richardson stuck to his guns; for years, his reward was a daily view of his incomplete bridge, uncluttered by cars. He would eventually lose the battle.

Richardson was likely asleep after 2 a.m. on Saturday, Dec. 12, 1964, when Fred Williams made his brief flight. The New Jersey native, a senior at the University of Pittsburgh, was driving his aunt’s 1959 Dodge station wagon from a friend’s apartment on the West End when suddenly the road vanished from under his wheels. The car plummeted 100 feet and landed upside-down at the river’s edge, 90 feet away.

Miraculously, Williams staggered out of the vehicle, dazed but otherwise unscathed. He called a cab from a phone booth nearby, requesting a ride to Allegheny General Hospital, where he was treated and released.

But what happened? Was the driver drunk? Suicidal? 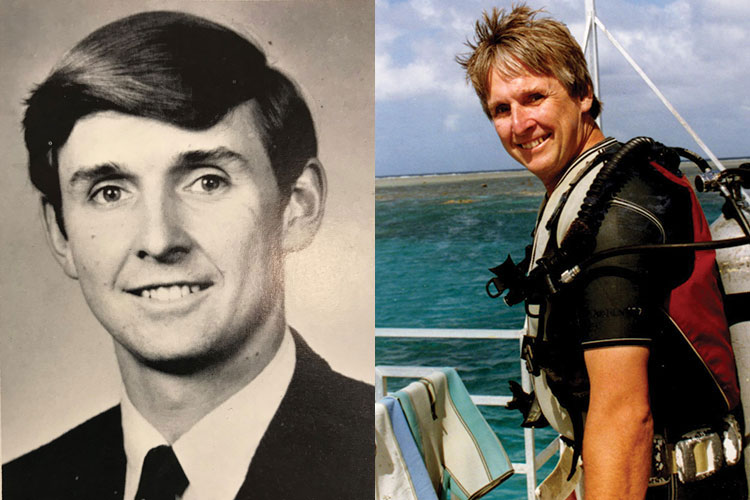 WILLIAMS PHOTO FROM HIS 1970 UNIVERSITY OF PITTSBURGH MEDICAL SCHOOL YEARBOOK ALONGSIDE A PHOTO TAKEN DECADES LATER AS HE WAS PREPARING FOR A SCUBA DIVE IN CALIFORNIA.

Even as KDKA host Rege Cordic turned the event into a publicity stunt for his morning radio show — printing “Cordic & Co. Bridge Leap” contest bumper stickers — Williams kept his head down. He wanted to be a doctor like his aunt and uncle; wrecking their car only solidified his resolve. The studious young man finished his degree in chemistry and went to medical school, then moved to southern California and had a long career as an oncologist. Williams died in 2014 at the age of 70.

“He was a really private guy and he always found that story totally embarrassing,” says his widow, Pat Williams. “I found it funny, but then I wasn’t in the car.”

Even with family, Williams was fuzzy about the details and reluctant to discuss the subject. For some, his vague claim that he got lost on a foggy night and thought he was on the Parkway East seemed to conflict with police reports that he had crashed through barriers at both ends at a “tremendous rate of speed.”

But further investigation revealed that the sawhorses and cable blocking the entrance ramp had not been crashed through but moved aside. Officials quickly replaced them with bigger, brighter blockades. But who would do such a terrible thing? Williams’ younger sister, Helen Hutson, an art teacher in West Virginia, says her late brother once confided his suspicions to her.

The Bridge to Nowhere wasn’t completely useless — for some daring young lovers, it was a properly scenic and isolated place to park. Someone had been out there that Friday night, Williams figured, and in the afterglow of an amorous embrace forgot to put the barriers back.

His alibi is further bolstered by math. Hutson says her brother’s physics professor proved it, adding a bonus question on the class’ final exam that year: How fast is a car traveling if it drives off a bridge 100 feet high and travels 90 feet forward before hitting the ground? The answer: about 25 mph. Perhaps Williams allowed a smile of vindication to cross his lips in the classroom as everyone had another chuckle at his expense. So much for police reports.

This article appears in the November 2019 issue of Pittsburgh Magazine.
Categories: Community Feature, From the Magazine, Hot Reads