Satisfy your caffeine craving with some great cafes that have popped up around the city this year. 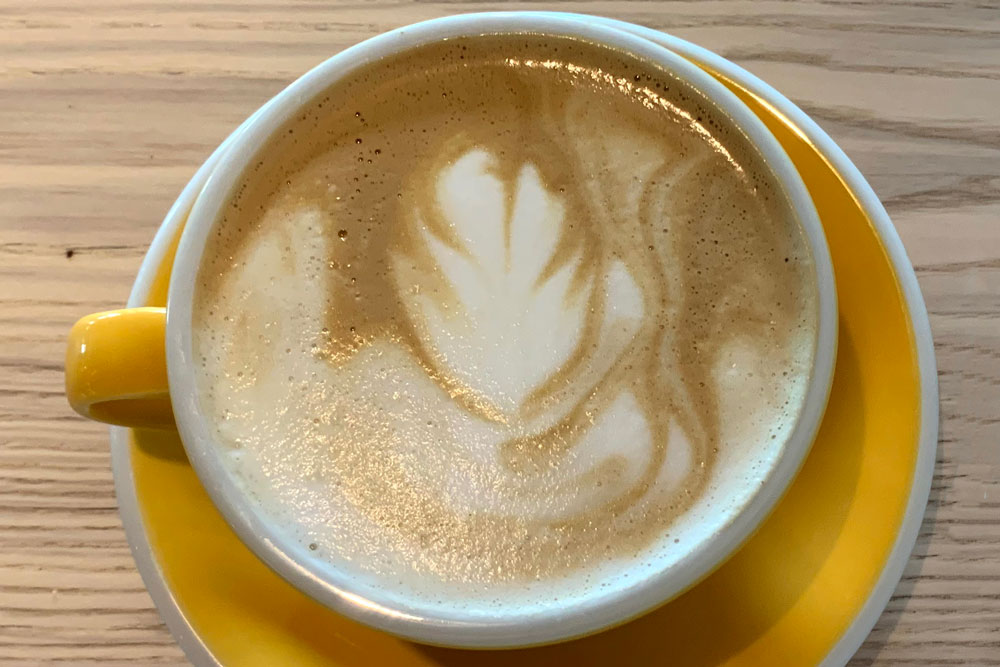 One may think that once you have so many coffee shops in a city, opening a new one becomes a little bit like reinventing the wheel. But all around the region, from the bustling Strip District to the North Hills, these newer additions are already carving legacies for themselves in the city’s landscape — and proving invaluable to patrons searching for a sip of normalcy.

Some of the coffee shops had grand openings planned at the end of 2019 or early 2020, but when the pandemic hit, they were postponed. Others were the product of opportunity and chance — the right time and the right place — while others yet were simply eager to bring forth original concepts and ideas. Whatever the reason, this year’s coffee boom delights with new creative spaces for classes and workshops, new partnerships with local businesses and, of course, an array of new espresso drinks. 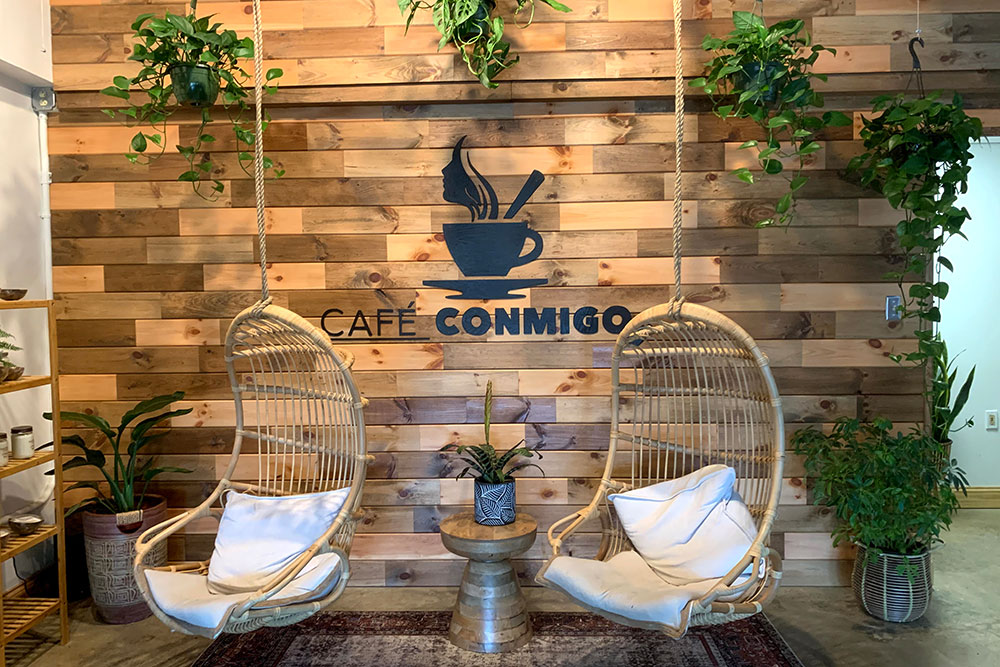 Just under a half-hour north of Downtown is Cafe Conmigo in McCandless — but it’s worth the drive from any direction. The shop’s interior is alive with lush green plants — it even has a guide to caring for them on its website — and the wooden bar and tables add to the serene, naturalist vibe that makes this coffee shop so distinctive.

Stop in for a lavender latte or a breakfast pastry — and feel free to bring your pooch (on a leash). The cafe also sells dog treats and other goodies.

Cafe Conmigo partners with local businesses to make a wide range of products available for sale in the shop. Customers can purchase honey from Russellton Bee Works, almond-based vegan cheese dip from Notcho Nocheez, artisanal olive oils and balsamic vinegars from Olive & Marlowe, handcrafted soaps from Up in Suds and ice cream sandwiches from Leona’s. 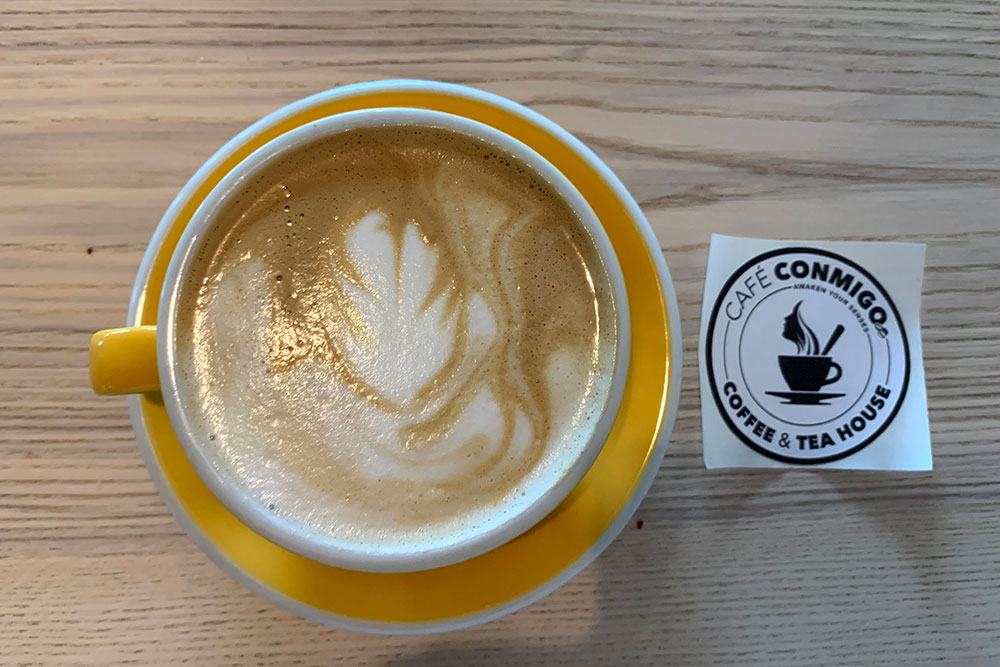 Cafe Conmigo had been in the works since 2019, according to its website, but when the pandemic hit, its owners were struck with uncertainty. It finally opened its doors in January 2021, and for the past nine months, it has hosted poetry workshops, yoga and meditation classes.

The spacious cafe is well lit and welcoming, with a friendly staff who engages regulars and newcomers alike in bubbly conversation. 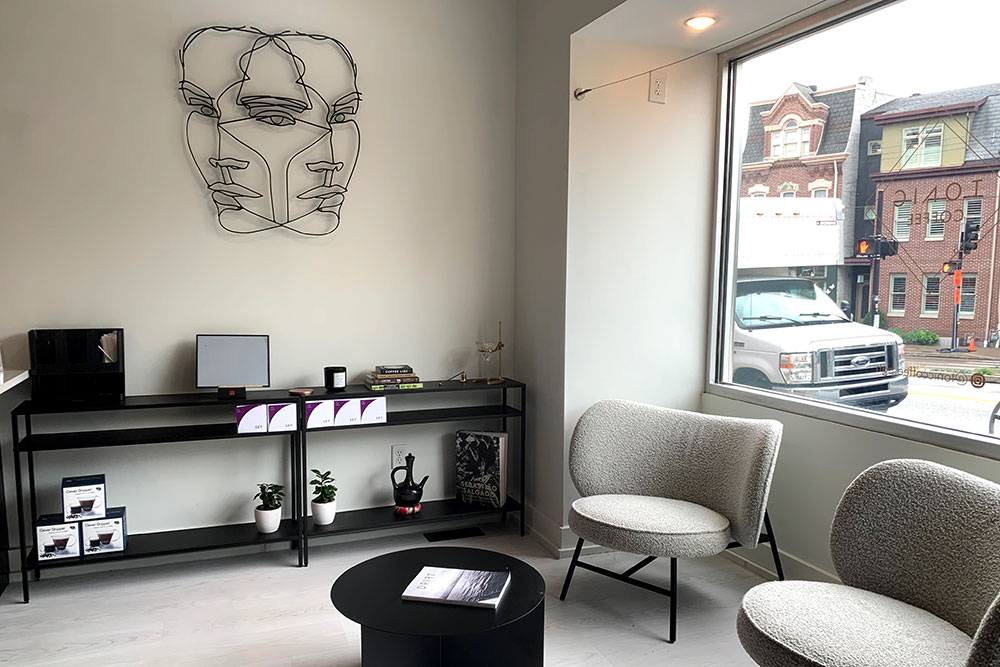 If you’re looking for a quiet respite from the hustle and bustle of Penn Avenue, look no further than Tonic Coffee.

Tonic’s website bills it as a place where “the convergence of coffee, art and music is woven throughout to create an immersive, multi-sensory event,” and that’s pretty much right on the money. It’s a modern shop that feels at times like you’re stepping into the living room of a sophisticated loft. The interior plays with contrast, leaning into the juxtaposition between black and white; a black brick accent wall and black shelves stand out against white floors and chairs, and the art displayed throughout the shop gives it an upscale, worldly and cultivated feel.

A candle scented like leather and oak mingled surprisingly well with the smell of brewing coffee, and books — Coffee Dictionary, Coffee Obsession and The New Rules of Coffee —- give it a cozy edge.

Tonic Coffee opened in May in a building that previously housed a detective’s office, a bike shop and a jewelry store. It serves coffee drinks and mocktails — alcohol-free cocktails — including its namesake beverage, tonic coffee, a blend of espresso, elderflower tonic, simple syrup, black essence (charcoal) and aromatic bitters. It’s a combination that works exceptionally well; it blends the acidic bite of espresso with a citrusy and floral tang from the tonic and bitters. At once refreshing and indulgent, it’s a drink in its own league, and it’s definitely worth a taste.

The shop also offers experiences in which guests can sample a range of drinks. There are two currently listed: A Trip to Morocco and A Trip to Mexico, running $35 each. 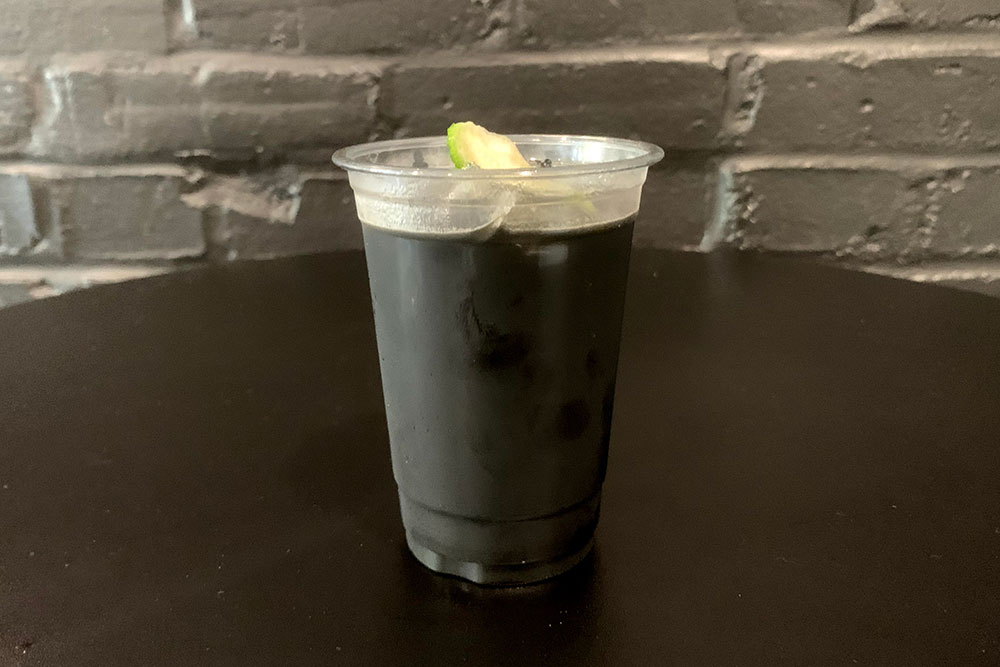 A Trip to Morocco is a five-course beverage experience that includes “teas, mocktails and other delights,” according to the website. A Trip to Mexico features a five-course coffee and mocktail tasting menu curated by an in-house or guest bartender. Beverages include a welcome drink, a single-origin coffee, which can be brewed as espresso, filter or with milk; a signature drink and “an inspired Mexican treat.” 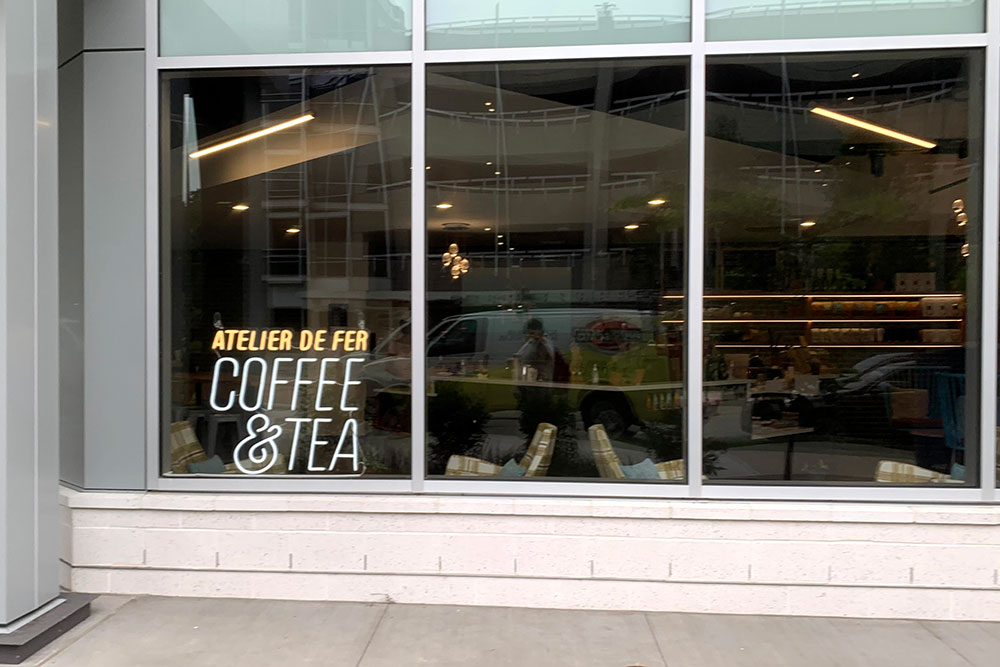 In April, Strip District-based Atelier de Fer launched two new outposts. Each De Fer location has its own personality, fitting neatly into its surroundings while still maintaining the singularity and sense of self that makes it such a notable local chain.

Atelier de Fer’s newest location, tucked away at the Riviera, a new office building next to the Hot Metal Bridge at the Pittsburgh Technology Center, offers a classy ambiance met with De Fer’s characteristic simplicity.

Its Riviera location doesn’t offer alcohol like its counterpart in the Strip, but it has a full coffee and tea menu, along with light food such as paninis, smoothies, pastries and parfaits. There’s also plenty of indoor and outdoor seating 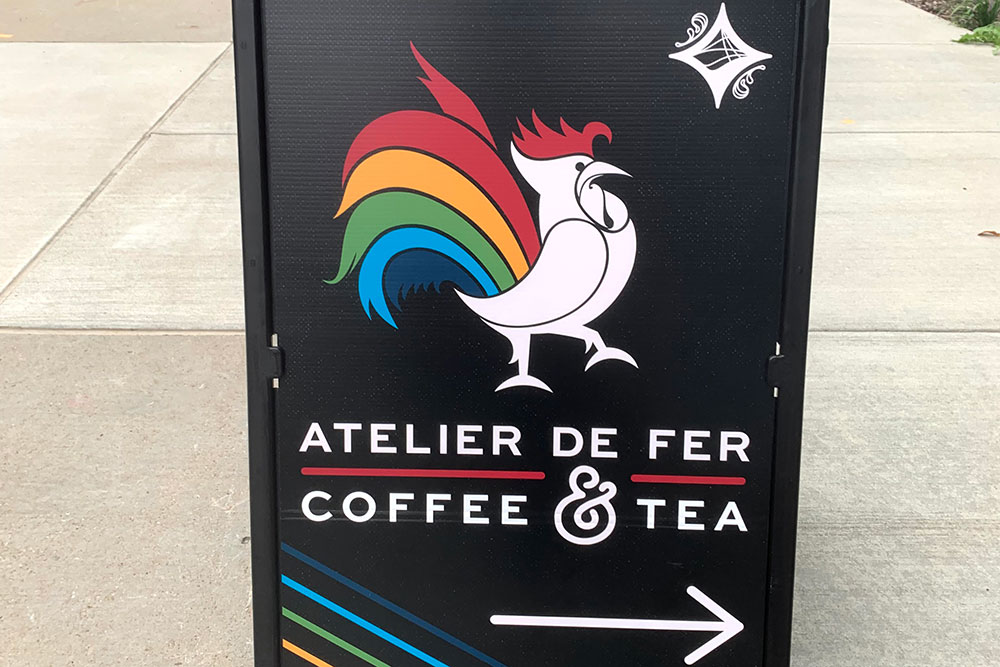 There is metered street parking and a garage right across from the building. If you’re on the hunt for a spectacular iced orange blossom latte or cappuccino, it’s certainly worth the trip. 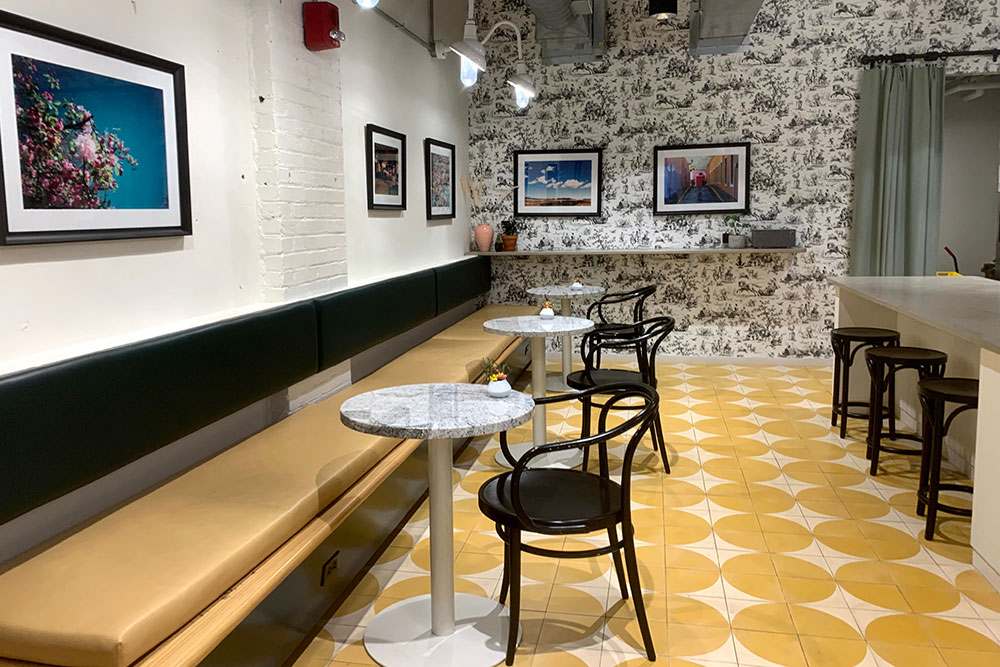 Another De Fer location opened on April 1, hidden away in the urban oasis that is The Highline, built along the Monongahela River on an elevated roadway. This De Fer location has indoor seating and ample outdoor seating, which boasts a lovely view of the Pittsburgh skyline.

Situated just off of East Carson Street, The Highline is a redevelopment of the late-19th-century warehouses that sat along South Side’s industrial stretch. It opened in the summer of 2020, housing more than 600,000 square feet of creative office and retail space, and more than an acre of public green space connected to the Three Rivers Heritage Trail.

But despite the scope and grandeur of the place, it remains one of the South Side’s best kept secrets; even some residents of the neighborhood don’t know that it’s there, making the De Fer tucked away inside something of a hidden gem. There’s something almost poetic about the sunny interior of the cafe juxtaposed against the rustic, industrial feel of the space containing it. Make no mistake; De Fer’s timeless decor still stays true to The Highline’s vintage theme, but it’s also entirely its own — well-lit, bubbly and warm. 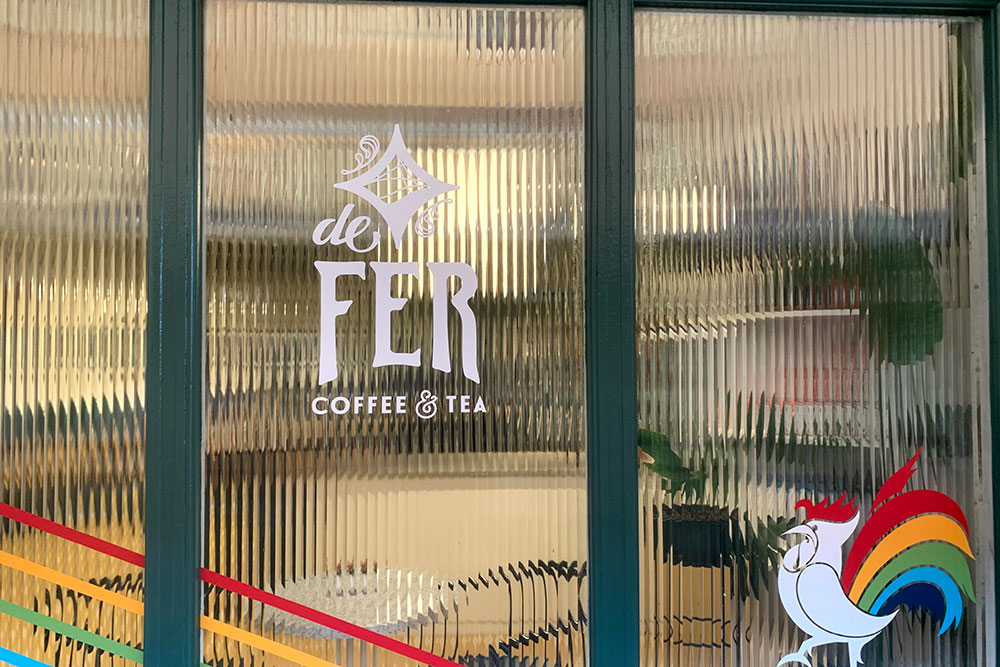 The location in The Highline is easily accessible by bike, by foot or by public transportation, and if you’re driving, there’s an underground parking garage off McKean Street, between Third and Fourth streets, where you can park free for up to two hours. This location also has light food such as paninis, pastries, smoothies and parfaits, and while it doesn’t always have beer and cocktails, it does host the occasional happy hour. 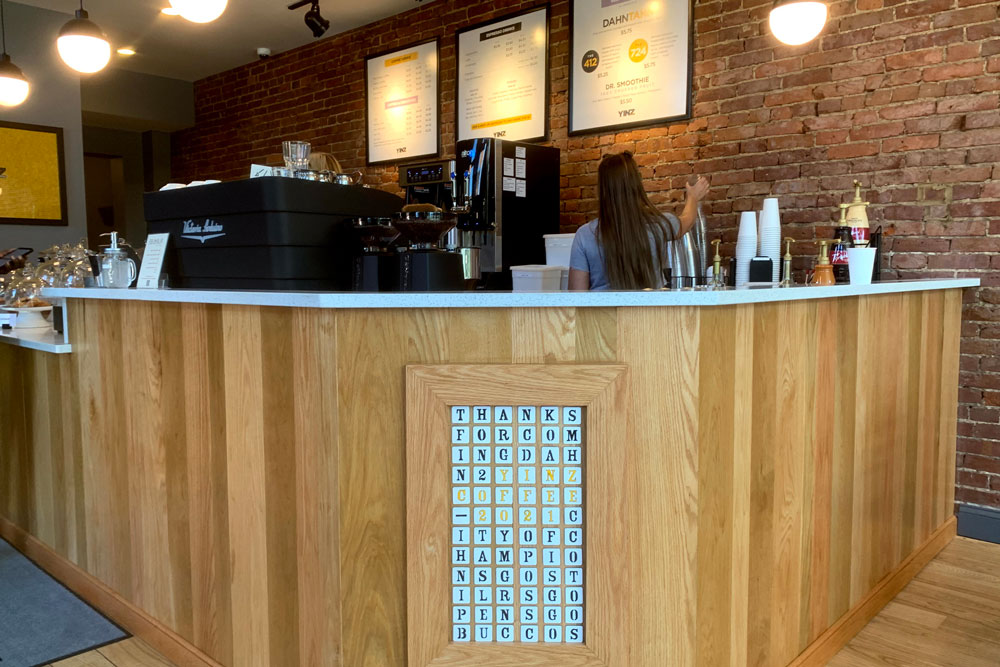 Yinz Coffee is the brainchild of Ken Zeff, who owned Crazy Mocha until he sold it to Cranberry’s Kiva Han Coffee Company in 2018. Zeff opened the North Side location, Yinz Coffee’s flagship store, in March. He operates a second location in another former Crazy Mocha location in Bloomfield.

The Crazy Mocha on the North Side was one of the chain’s few stores to remain open through the pandemic. But in October 2020, the chain filed for bankruptcy, and some storefronts were closed for good. Zeff saw an opportunity to get back into the business after a few years out, and he took it.

For out-of-towners, “yinz” is a second-person plural in the dialect native to Western Pennsylvania and Appalachia, known colloquially as Pittsburghese. Staying in line with its name, Yinz Coffee bleeds black and gold; from a black-and-yellow color scheme to the Steel City sports memorabilia hung on the walls, Pittsburgh’s history and pride is evident in every inch of the place. It even has Pittsburgh-themed drinks — an espresso frappe with your choice of sauce or syrup and whipped cream is called The 412;  an espresso frappe with chocolate sauce, peanut butter syrup and whipped cream is called The 724; and if you order a Dahntahn, you’ll get a chai espresso frappe, also, there’s a theme here, with whipped cream. 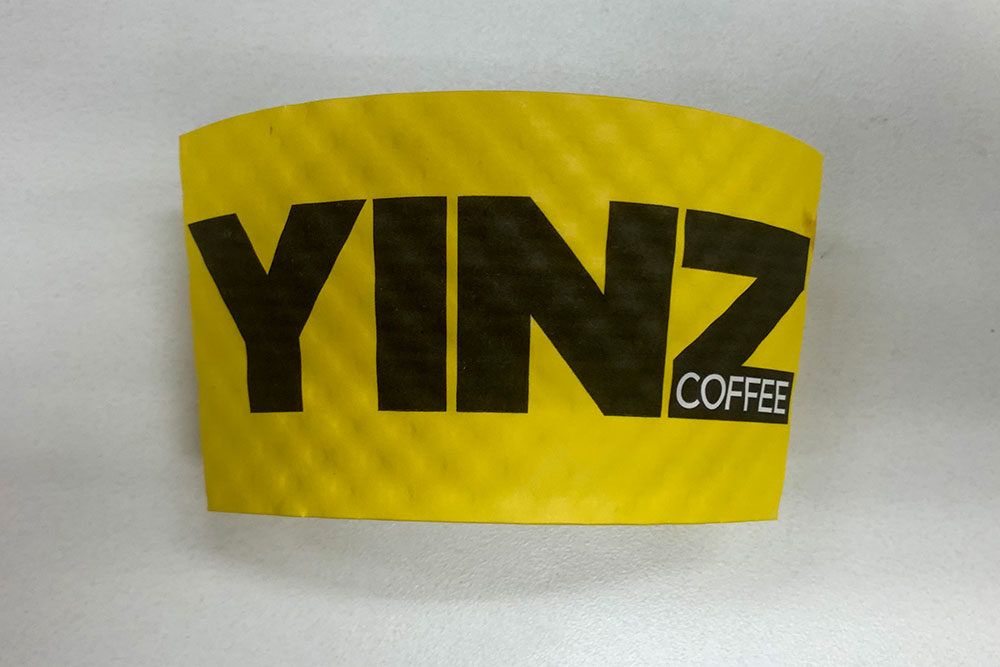 Visitors to the shop can also purchase retail products, including T-shirts and mugs branded with the cafe’s logo, along with sodas, snacks and bags of coffee beans. 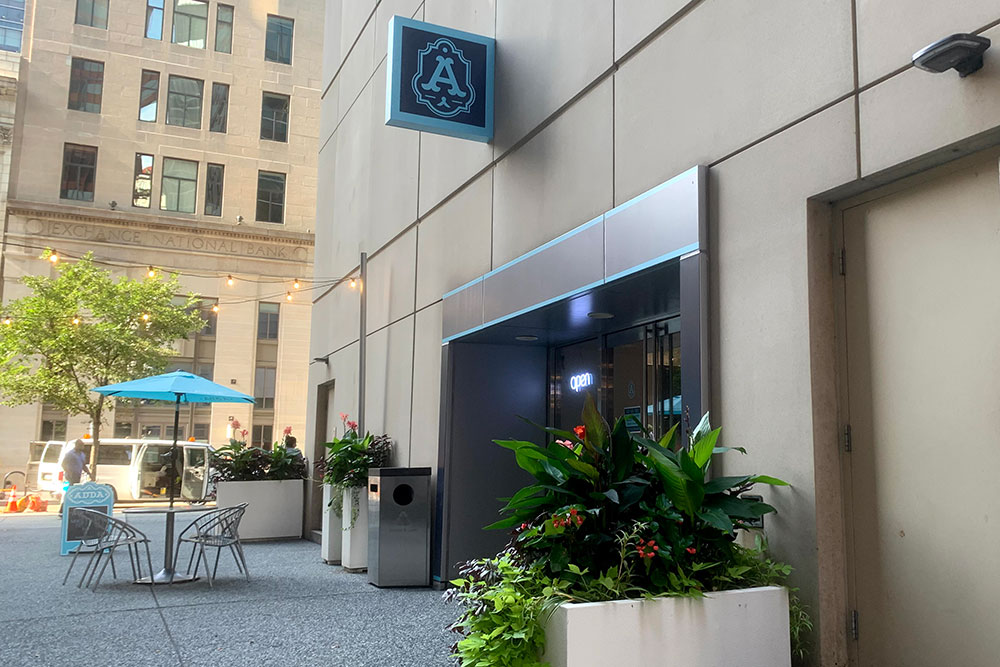 Adda opened its first location in Shadyside five years ago, and has since established itself as a vital element in the city’s coffee scene. Its second location on the North Side opened in December 2018, and a third location, Adda Bazaar, opened in Garfield last October. The Garfield shop doubles as a vendor hall featuring products from local artisans, which can be purchased in the store or online. The other locations have also expanded the retail element, but the Bazaar remains the chain’s one-stop-shop for art prints, mugs, chocolates, sauces, shirts and more. (Not to mention, a great iced vanilla latte.)

On July 26, the local chain opened a temporary “pop-up” shop Downtown, tucked away between skyscrapers in Three PNC Plaza. The shop, slated to stick around until the end of 2021 at least, offers a nice hiatus from the steely hubbub of the city center. With ample outdoor seating beneath the orange glow of fairy lights and a fair bit of greenery in planters around the patio, the experience is as relaxing as it is colorful.

The shop’s simple interior proves once again that less is often more. Despite its ephemerality as a pop-up shop, it feels perfectly placed and well-designed. It may be comparatively tight quarters when pitted against Adda’s other sites, but it makes good use of the space it has. Coffee beans, brewing equipment, mugs and a variety of treats also can be purchased here.

‘Tis the season for pumpkin spice, and no one does it quite like Adda. The drink, made with real pumpkin, is at once sweet and spiced — smooth, balanced and not at all overbearing. It’s good on ice for the warmer days on the cusp of summer and fall, and even better hot on a chilly morning. But if pumpkin spice isn’t your jam, the pop-up still offers a full menu of coffees and teas. 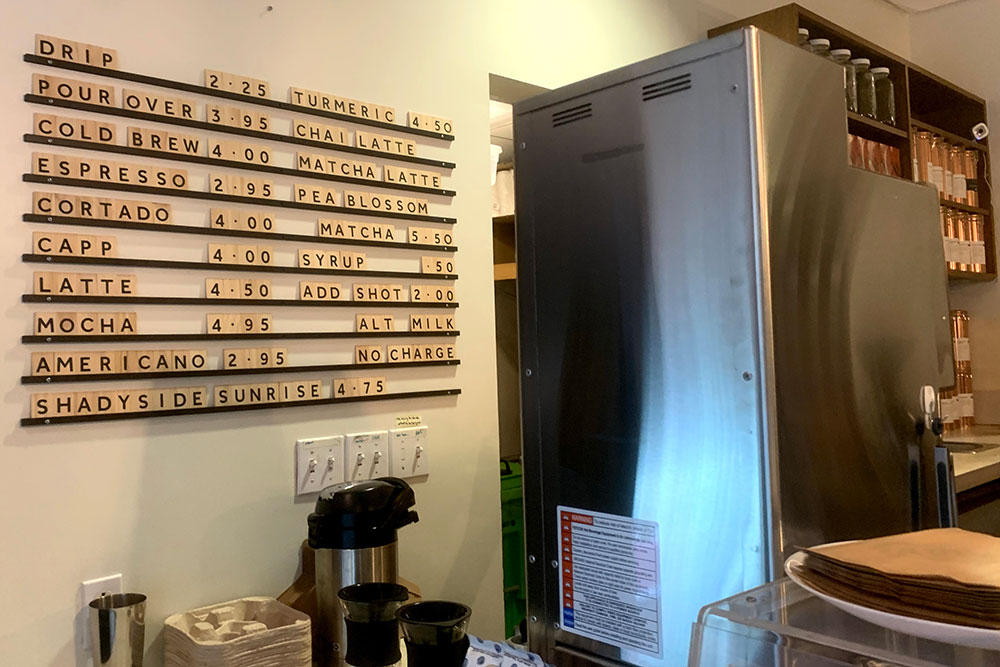 According to Adda’s website, “adda” is the Bengali word for “bringing people together to engage in the fine art of conversation.” This is a goal the shop reaches toward through community events such as yoga, High Tea service and live music performances across its four locations.

Another permanent Adda is slated to move into a historic building at 725 Penn Ave. in Downtown’s Cultural District, across the street from the Benedum Center. Expected this fall, the shop will be Adda’s second storefront to employ the Bazaar retail concept.