Get to know the city’s next generation of savvy, ambitious ’tenders. 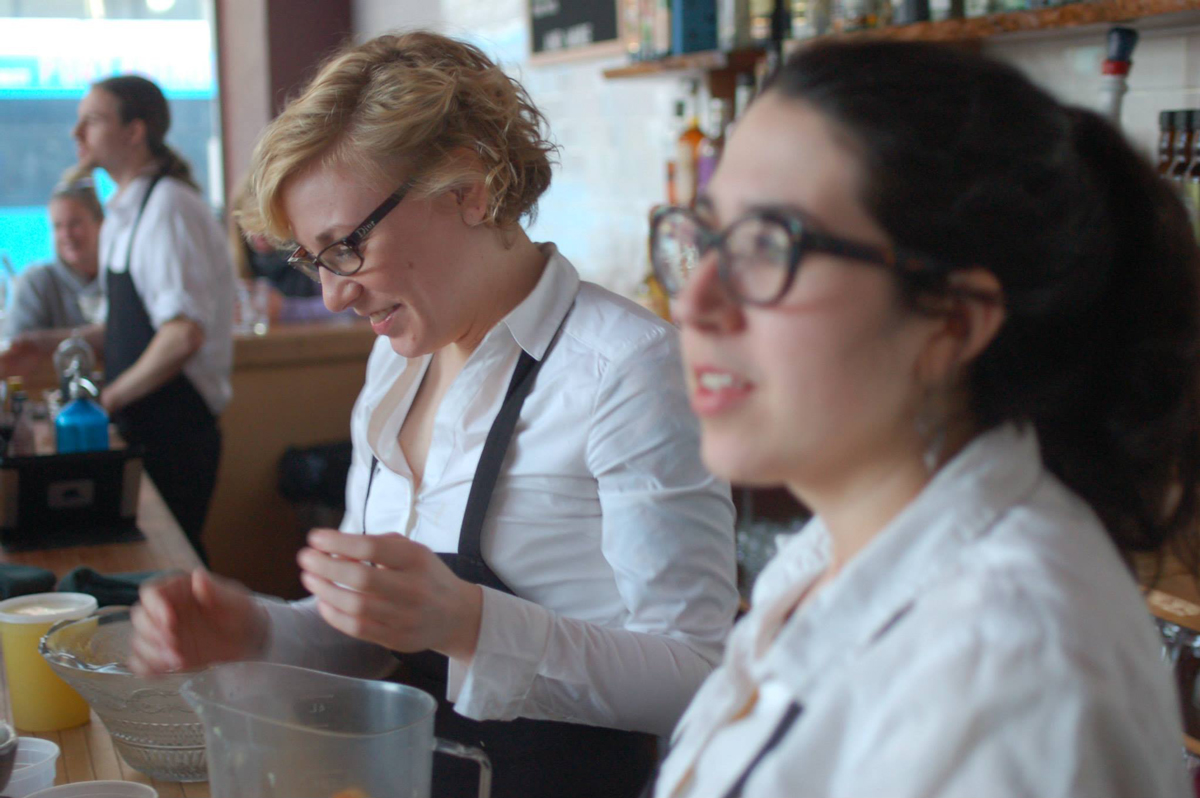 Inside Pittsburgh bars, mixology family trees are growing. The city’s next generation of notable bartenders are finding their voices. Some of these bartenders are quite new to the profession, while others have been at it for a little longer; what we see in all of them is a bright future of perfectly crafted cocktails, sharp attention to customer service and deep knowledge of spirits, wine and beer.

You might not know their names yet, but you will soon. Pittsburgh, it’s time to get familiar with your Best Rising Star Bartenders.

Abbie Brehm’s first bartending gig was at McFadden’s, the now-shuttered Columbus, Ohio, bar famous for its rocking Ohio State University football parties. She left behind the party bar scene and developed her skills at classier Pittsburgh bars Salt of the Earth and Harvard & Highland. At The Livermore, she’s merged the party energy of her past with a mastery of mixology and peppered it all with a passion for customer service.

Brehm is one of our favorite bartenders to go to for a classic cocktail; we think she makes the finest Old Fashioned in the city. “I’m not trying to reinvent the wheel,” she says. “Classic drinks have a specific recipe for a reason.”

When Brehm isn’t bartending, she’s finishing up a master’s degree in landscape architecture, something she plans on applying both to bar/restaurant design and community development.

Jeremy Bustamante: Salt of the Earth

Jeremy Bustamante, bar manager at Salt of the Earth, has been in and out of the bartending game for nearly 10 years. He worked at Enrico’s Ristorante and Pangea before they closed and joined the bar team at Salt a few years ago. Once the quiet guy working behind epic Pittsburgh bartenders Maggie Meskey, Summer Voelker and Erika Joyner, he’s really come into his own since he taking over Salt’s bar program last year.

In fact, he credits Meskey (who we profile in November’s Grow. Cook. Drink.) with training him to be a top-notch cocktail bartender and the cadre of Salt chefs with instructing him on how to maximize culinary technique and flavor.

We’re excited to see how Bustamante continues to adapt the Salt menu to fit his own style. If the recent “Vodka” cocktail — Boyd & Blair, fire-roasted pepper, basil and lemon — is any indication, we’re going to be enjoying a few drinks with all of our meals at Salt.

Diego Michael Byrnes started bartending as a college student in Maryland. Pittsburgh gigs include a stint at Rivertowne on the North Shore and as part of the opening team at James Street Gastropub & Speakeasy. He’s been a fixture at Spoon for the last 18 months, where, under the direction of General Manager John Wabek, he’s crafted bitters, tonics (surpassing his mentor with the fantastic Tonic No. 6), infusions and vermouths.

He says his passion partially comes from memories of spending time in his grandmother’s macrobiotic restaurant in Madrid. “I was very young and remember people were always smiling, with pleasant smells of delicious food in the air. Restaurants offer an escape, a place to immerse your senses,” he says.

Amanda Carto hasn’t been bartending very long, but we feel like she’s already made a big impact at Butterjoint, where she’s been since May. She comes to the bar with a great pedigree, having worked as a server at Salt of the Earth and a bartender alongside United States Bartenders Guild Pittsburgh president Rob Hirst at Soba.

However, it’s since she started working with Butterjoint Bar Manager Will Groves that we’ve seen her make an impact. “He has so much talent. I learn something new every day,” she says of Groves.

Carto’s approach to creating cocktails is ingredient-driven; try The Atwood, a mix of Rittenhouse Rye, Maison Rouge, Yellow Chartreuse and bitters. We especially like her old-school bartender philosophy of customer interaction. “It’s [the bar] is an immediate venue for communication. I’m learning so many people’s stories,” she says.

Like most of the bartenders on this list, Meat & Potatoes’ Greta Dunn’s first gig was less than crafty. “I started out making Rum Runners and Miami Vices at Sandcastle’s Sandbar,” she says.

Fast-forward seven years, and Dunn turned those pseudo-tiki-sugar-swill drinks into a genuine tiki party with Lucky the Painproof Man at the Tiki Lounge.

Although Tiki Thursdays are no more, the super-affable Dunn continues to craft terrific cocktails. She recently won the Pittsburgh Cocktail Week bartenders challenge with her Sailors’ Warning, a mezcal-forward spin on a Tequila Sunrise.  “I’m constantly thinking about how I can improve recipes or create new flavors,” says Dunn, who took two garde manager classes at CCAC to improve her culinary skills.

Her current projects: making an orgeat-style syrup with nuts other than almonds and crafting her own line of bitters.

Most people return from New Orleans with a weeklong hangover and a handful of hazy stories. Jason Endress returned from New Orleans in July 2013 with a new outlook on his profession. “That’s when I decided I wanted to do this for the rest of my life,” he says.

He’d just worked as an apprentice at Tales of the Cocktail, the nation’s largest gathering of bartenders and booze brands. Before that, he was a bit of a wild card; indeed, his first bartending gig — at Sonny’s in Bloomfield — started after several years as a patron there.

Now, he’s one of the classiest pros in town — though he admits that “the dive bartender in me still sneaks out sometimes” — and we appreciate that he’s a hard worker and team player. We’d be quite surprised if Endress isn’t running his own bar a few years down the road.

Max Stein: Butcher and the Rye, Acacia and Meat & Potatoes

Max Stein is our Rising Star Rookie. After a several months of apprenticeship at Meat & Potatoes, he’s been bartending full-time since February. But he’s always had an affinity for exploring drinks. “Even in middle school I was reading ‘Ultimate Beer’,” he says.

Prior to working at Meat & Potatoes, Stein worked for a tech company that developed iPad drinks menus for area bars. He also wrote the company’s spirits blog. Then, he says, “I wanted to explore what it was like on the other side of the bar. It’s one thing to be a connoisseur and go to the bar and order drinks from bartenders. I wondered what it would be like to be the person they ordered from instead.”

Stein credits his near-encyclopedic memory for giving him a deep knowledge of both classic and contemporary cocktails. Next up, Stein plans on modernizing some of those recipes he finds dated — either too booze-forward or dry.

Go now: Butcher and the Rye

This article appears in the October 2014 issue of The Best Blog.
Categories: Best of the ‘Burgh