5 Funniest People in Pittsburgh (You Haven’t Heard Of)

There’s always been comedy in Pittsburgh. Several famous comics have risen through the ranks; others have performed here. But a comedy community in Pittsburgh — that’s something new. Thanks to a decade-plus of exponential growth, the city is soaked with improv, sketch, stand-up and more. 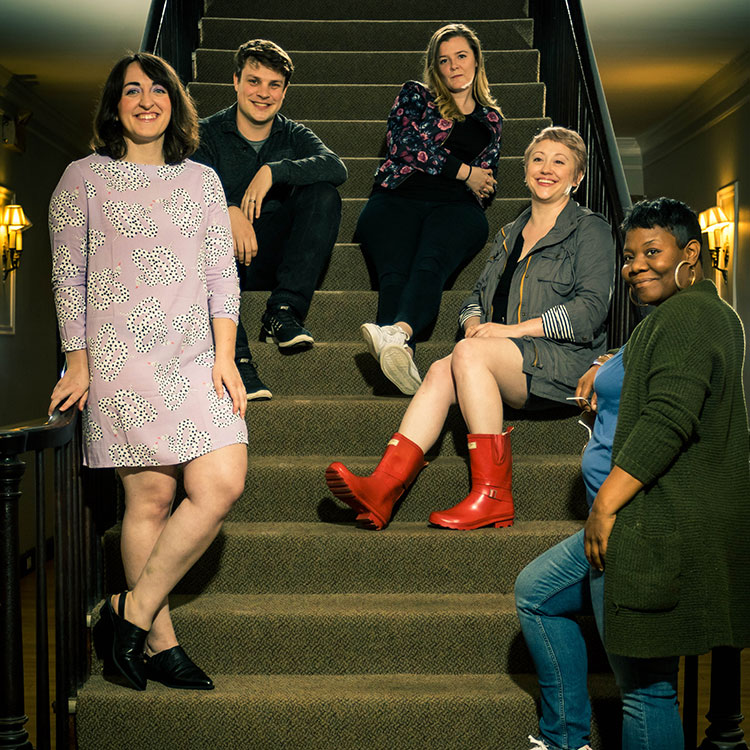 The five funny individuals we’ve chosen to include here are, to one degree or another, products of that growth. That community — and the opportunities that come with it — was unanimously cited by our selections as the best thing about comedy in Pittsburgh today. “We really look out for each other,” says Samantha Bentley. “I just feel like we really stick together, we really network.”

And while our honorees were quick to also point out that Pittsburgh’s comedy community needs to become more diverse — “It doesn’t feel like it always reflects the city as a whole,” says Jesse LE — comedy, by its nature, tends to unite. “I’ve seen how comedy can bring people together,” Anna C. Reilly says, “and make a bunch of different people feel united and have fun, across backgrounds and perspectives.”

Samantha Bentley
Even in the 21st century, public-access television can be a launching pad. Samantha Bentley got comfortable in front of a camera via the PCTV show “Off the Grill” before co-hosts and viewers urged her to give stand-up a try. “I’ve always been told I was funny, but that doesn’t really mean anything,” Bentley says. “Funny around people, in conversation, is different than funny on stage.” Fortunately, she’s both. Winning the Pittsburgh Improv’s annual open-mic competition in 2016 turned heads; the recurring “Three Women, One Mic” series she cofounded with Tracey Williamson and Shaun McCarthy tours the region, including, through August, a biweekly podcast recording at Sugar & Smoke in Bloomfield.
Follow: Samantha Bentley on Facebook

Anna C. Reilly
Training started early for Anna C. Reilly. Her uncle ran a franchise location of ComedySportz, a Milwaukee-based chain of improv-comedy venues, in Green Bay, Wis. She attended a summer camp there in middle school, kicking off a performance career that included a stint on one of Arcade Comedy Theater’s first house teams, 8-Bit. She’s now a member of the longstanding improv troupe Irony City, with whom she effortlessly brings the house down on a regular basis. Such laughs are drawn from lived experience, she says. “You can’t be a strong improvisor if all you’re doing is thinking about comedy and improv all the time,” she says. “The thing that makes comedy fun to do and watch is being able to … notice possibilities that other people may not have noticed before.”
Follow: @reillycoyooote on Twitter and Instagram

Jesse LE
What’s funny to Jesse Landis-Eigsti? “People who are making themselves laugh,” he says. “People who are doing things that they, themselves, find funny. Audiences can tell the difference between calculated humor and humor that comes from who a person is.” For LE, that started in elementary school when he began writing his own comedy songs and scripts. He still combines music and comedy, both in his solo performances and as the innocent songster Bardly Cooper in the popular “Knights of the Arcade” shows at Arcade Comedy Theater. He’s also a regular performer with sketch group JFLE, improv show The Playlist and more.
Follow: @jessel_e on Twitter

Helen Wildy
As (almost certainly) Pittsburgh’s first Belfast-born comedian, Helen Wildy regularly provides ample evidence of the  Irish wit. It is, after all, a natural — or at least nurtured — quality. “I grew up with very funny people,” she says. “I don’t know if it’s genetic, or how much of it is influence. My parents are the funniest people I’ve ever met; my brothers are so funny. I’ve been surrounded by hilarity my whole life.” After her family — and at least one guidance counselor — encouraged her for years to give the stage a try, Wildy signed up for an open mic at The BeerHive in 2012. Today, she can be seen as a feature comic at the Pittsburgh Improv, Arcade Comedy Theater and throughout the region.
Follow: @howthehelen on Twitter; helenwildy.com
Sarah Wojdylak
“I don’t really like to watch people who are in an improv scene or in a stand-up set and are too cool for what they’re doing,” Sarah Wojdylak says. “I like when people are really just in it.” It’s a quality she’s demonstrated as an improv and sketch performer with groups including the long-running Secondhand Sketch and Cousins, as well as a current member of Arcade Comedy Theater house team 8-Bit. She’s also one of the theater’s go-to talents for marquee events such as the monthly “Hootenanny” shows and Comedy Royale. It’s a ladder she climbed quickly; Wojdylak began taking classes just five years ago, making her a star product of a comedy scene where, she says, “People are branching out and finding their own voice.”
Follow: 8-Bit on Facebook