While grand ceremonies with many guests can make for a magical occasion, an intimate ceremony could be a better fit — and will definitely benefit your bank account. 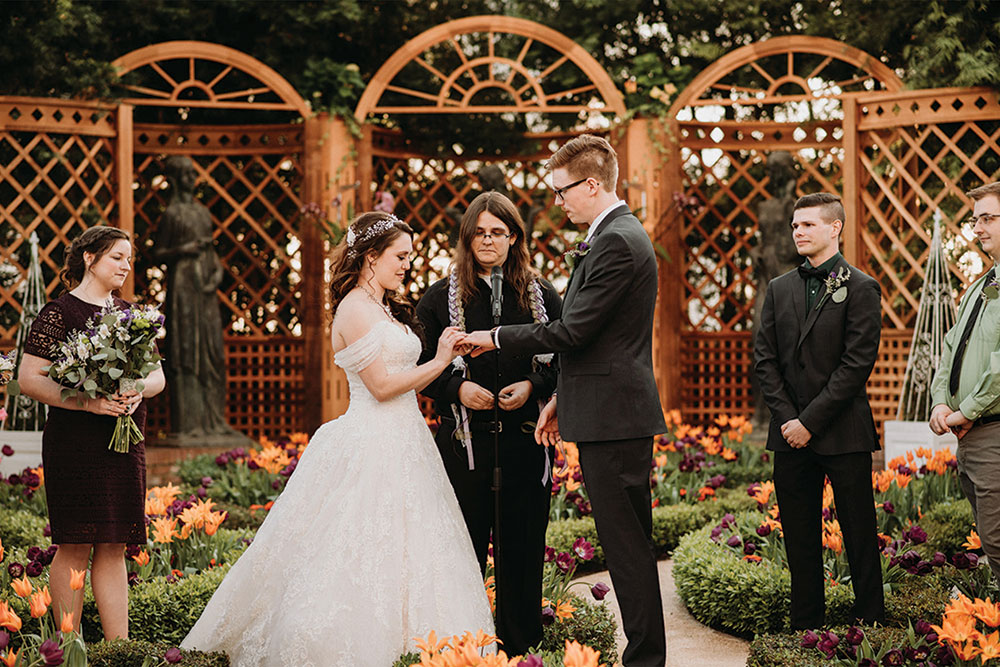 For some, a grand wedding with 450 guests is a dream come true. A big celebration in a spacious venue is everything some couples are looking for when planning their wedding day.

But it’s not for everyone. For those weighing the pros and cons of both an intimate and grand wedding, here are four big reasons to keep your wedding guest list small.

Keeping It Personal and Comfortable

The exchange of vows and celebration that follows should be a stress-free and enjoyable day centered around the love shared between the newlyweds. Logan Tautkus-Berry and Kaitlyn Briggs, who married in April at Phipps Conservatory and Botanical Gardens, kept their guest list to 50 people.

“We wanted to keep it really personal,” says Kaitlyn. “We were able to have one-on-one chats with people. At the reception, we got to talk to everyone for like 30 minutes, and since almost everyone already knew each other then it made the night a lot more comfortable.”

To decide who would make the cut, the couple started with their immediate family (plus some aunts and uncles) and their tight-knit friend group. For other friends and family members, if either Logan or Kaitlyn had not met the person by that point in their relationship, they were not included.

With a smaller guest list, Kaitlyn notes how easy it was to add personal touches to the day. They wanted to get married on April 1 — the anniversary of their first official date — but it fell on a Monday and the couple was aware it would be hard for many people to attend. However, with only a small guest list, pulling it off was an easier task.

Other personal touches included: a reception at their favorite restaurant, Bar Marco, homemade party favors that catered to their interests, and a guest book made up of Polaroid pictures of the guests rather than signatures. 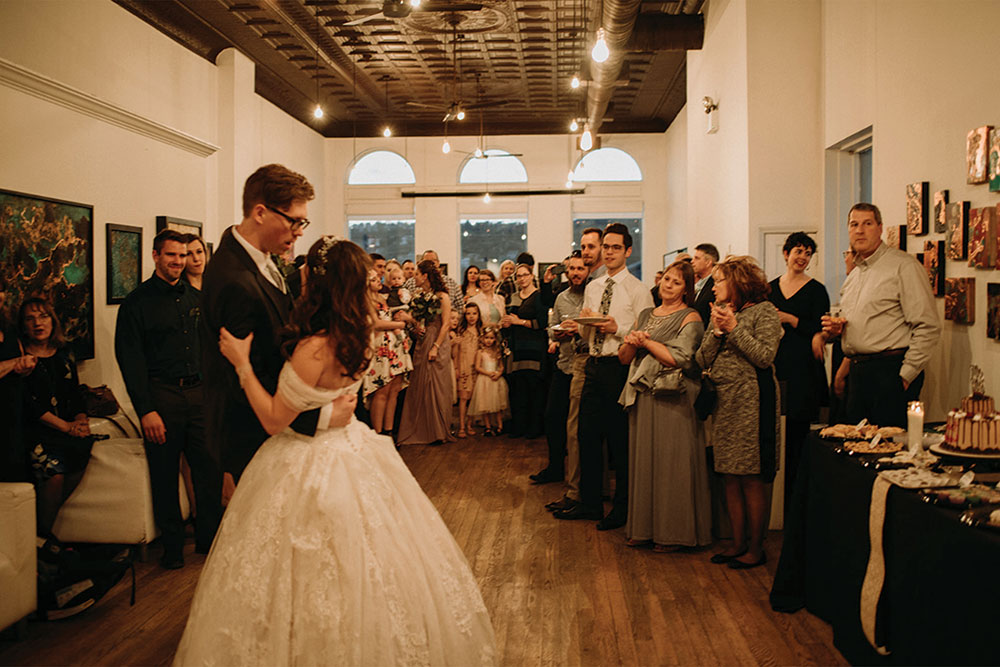 Figuring out a budget for both the ceremony and reception can be stressful and overwhelming in the midst of choosing a venue and all of the vendors. Melissa Crawford — a planner and coordinator who owns Devoted to You event company — broke down how small guest lists can be financially beneficial.

“One of two things can happen with the budget when you have 50 people or less. You either have the opportunity to spend less overall, thus decreasing your budget, or to spend what you would have on a 150-person wedding and have more flexibility with your funds,” says Crawford.

Let’s say a bride and groom have a guest list of 150 people and a budget of $30,000. According to Crawford, the cost of the venue with food and alcohol for this wedding would cost roughly between $15,000 to $22,000, leaving about $8,000 to $15,000 for everything else — “photography, videography, florals, music, invitations and other paper products, dress, tux, transportation, etc.”

“To be honest, if you are the couple with that scenario, then you have to be more selective on which venue you choose because more than likely you are going to need to be at the one that allows you to bring your own food and alcohol to stay within your budget,” says Crawford.

“I think what people don’t think about is the bigger picture,” she says. “Fifty guests versus 150 guests is not only less on venue, food and alcohol, but it’s 100 less place settings, 100 less napkins, 100 less chairs, 12 less tables, 12 less linens. All of these things add up in the budget.”

With a large number of family and friends in attendance, the traditional posed family photos after the ceremony can be more complicated; it can be difficult to find one special aunt or longtime friend you want for a photo. It can be even more difficult to capture moments with everyone at the reception. 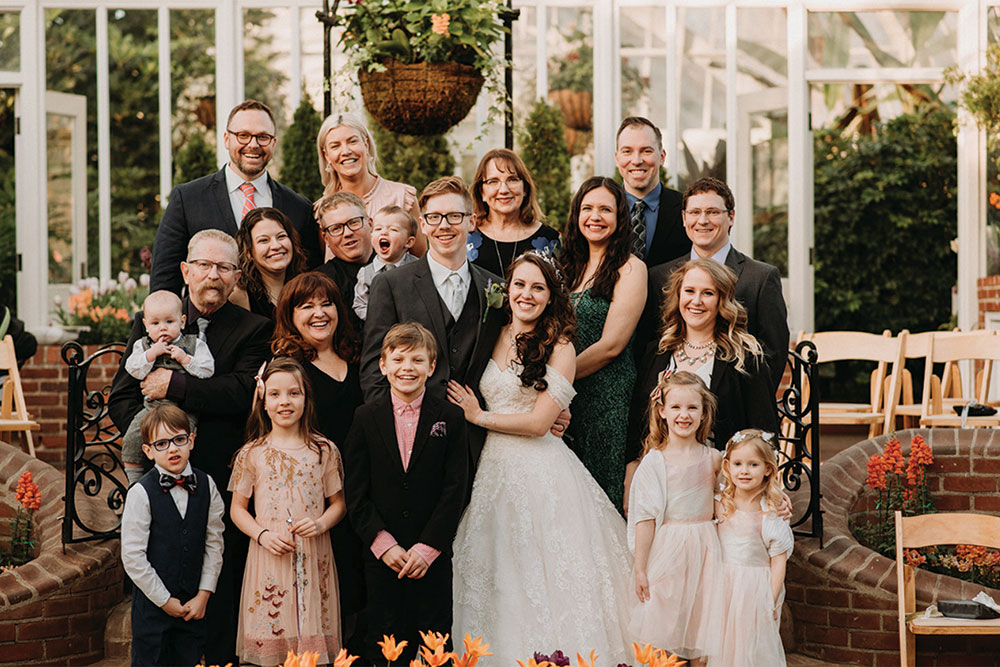 At Kaitlyn’s ceremony, held in the Broderie Room at Phipps, the location was small enough that the photographers could capture every moment without a lot of obstruction.

Following the ceremony, gathering everyone for portraits ran just as smoothly.

“It was very easy to get everyone lined up,” says Kaitlyn. “You didn’t miss out on anyone because it was way easier to look around at the people and decide who needed to be in that specific picture.”

Lauren McMillen, owner of PointBreezeway — a small event venue ideal for intimate weddings in Point Breeze — chose to enter the industry specifically to host small weddings. She says small weddings make her think of one word: “memory;” photographers can capture intimate moments without being bogged down by multiple guests wanting the attention of the bride and groom.

“As a couple, you are included in everything. You talk to everyone. You know what’s happening when you aren’t pulled in a million different directions,” she says. “At the end of the day, it’s not a blur … it’s a clear memory of everything you wanted your celebration to be.”

With large guest lists, soon-to-be-married couples in the midst of planning their wedding can find themselves limited because they need a ceremony and reception space large enough to hold everyone. However, with small guest lists, the options can be more open-ended and include restaurants, cafes and bars.

Kaitlyn and her husband wanted to be married in Phipps, which has multiple rooms for weddings. She had her eyes on the Broderie Room, which was limited to 50 people or less (minus the wedding party). The couple may have missed the opportunity to be married within the garden’s walls if they extended their guest list.

Phipps is one of many locations in Pittsburgh perfect for small weddings. Here are five other venues Crawford recommends for intimate ceremonies.