3 Total Transformations That Will Wow You

From a tiny row home renovation to an “unflip,” these Pittsburgh projects are inspiring. 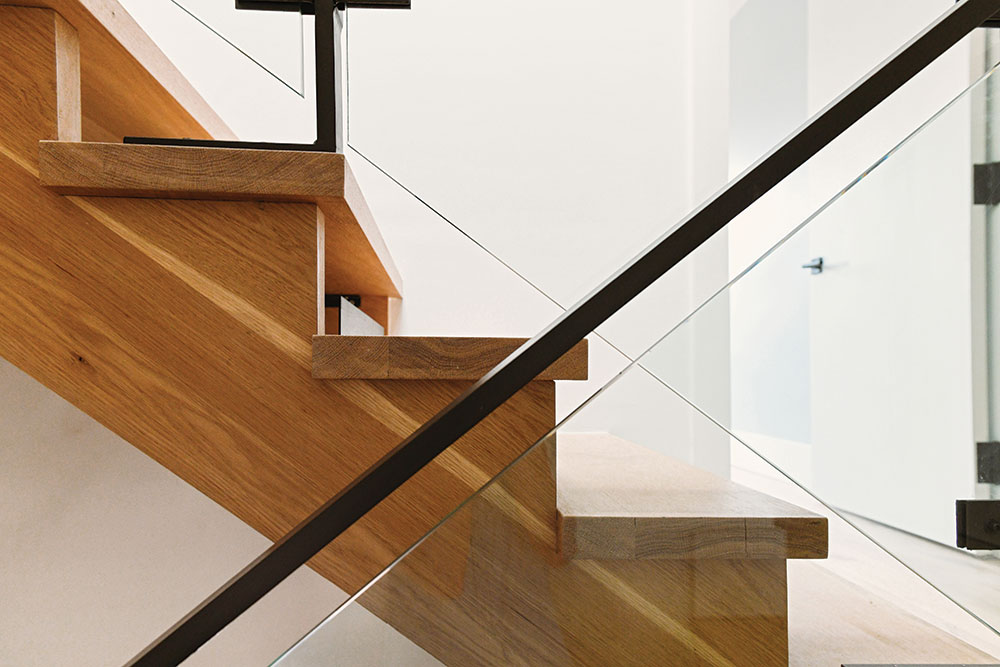 Stay-at-home orders and travel restrictions meant most Pittsburghers have been spending a lot of time at their houses. And being confined to your property means spending a lot of time studying your residential flaws: old paint palettes, outdated kitchen cabinets and scuffed hardwoods included. For those itching to accomplish a home renovation project that will turn a living space into a luxury habitat, hold onto your hammers while you take a gander at these three total transformations. The homeowners, whose styles range from sleek and modern to vintage and funky, have a knack for maintaining the homes’ original character while maximizing tight living spaces. 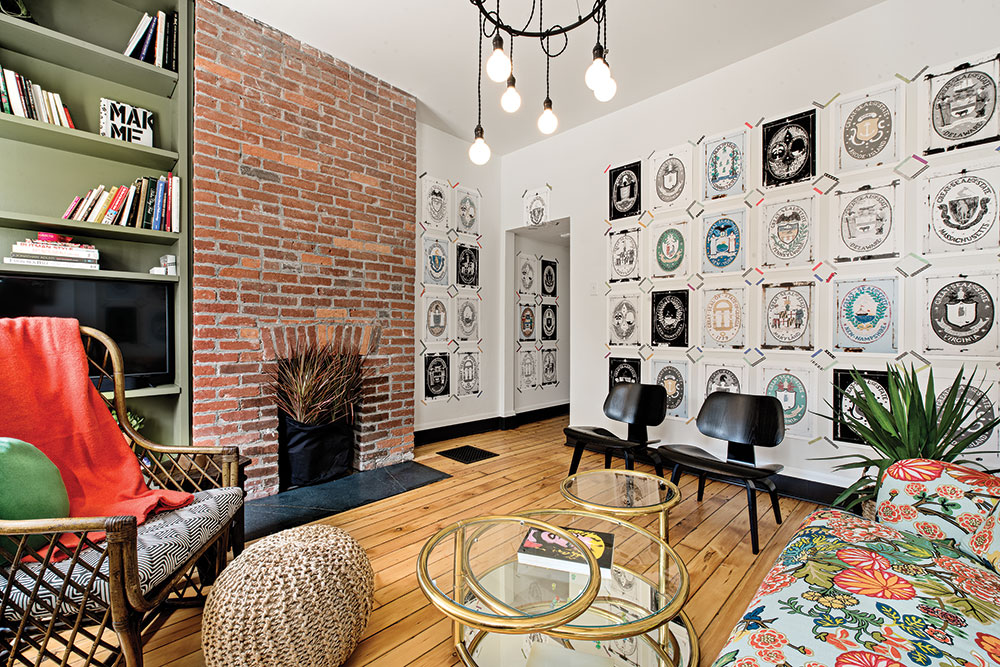 Nearly a century ago, when famed architect Benno Janssen designed the 40th Street Bridge (also known as the Washington Crossing Bridge for marking the spot where then-General George Washington forged the Allegheny River on a wooden raft), he included an unusual architectural detail: 14 intricate, metal medallions.

So when Becky Jarold, a designer with a love of history and a background in adaptive redesign, began a labor-of-love renovation of a brick townhouse in central Lawrenceville, she looked to Janssen for inspiration.

“He used these really funky, cool, kind of wonky pieces of jewelry on the bridge,” Jarold says. “People would probably never do that today. Why not celebrate them?” 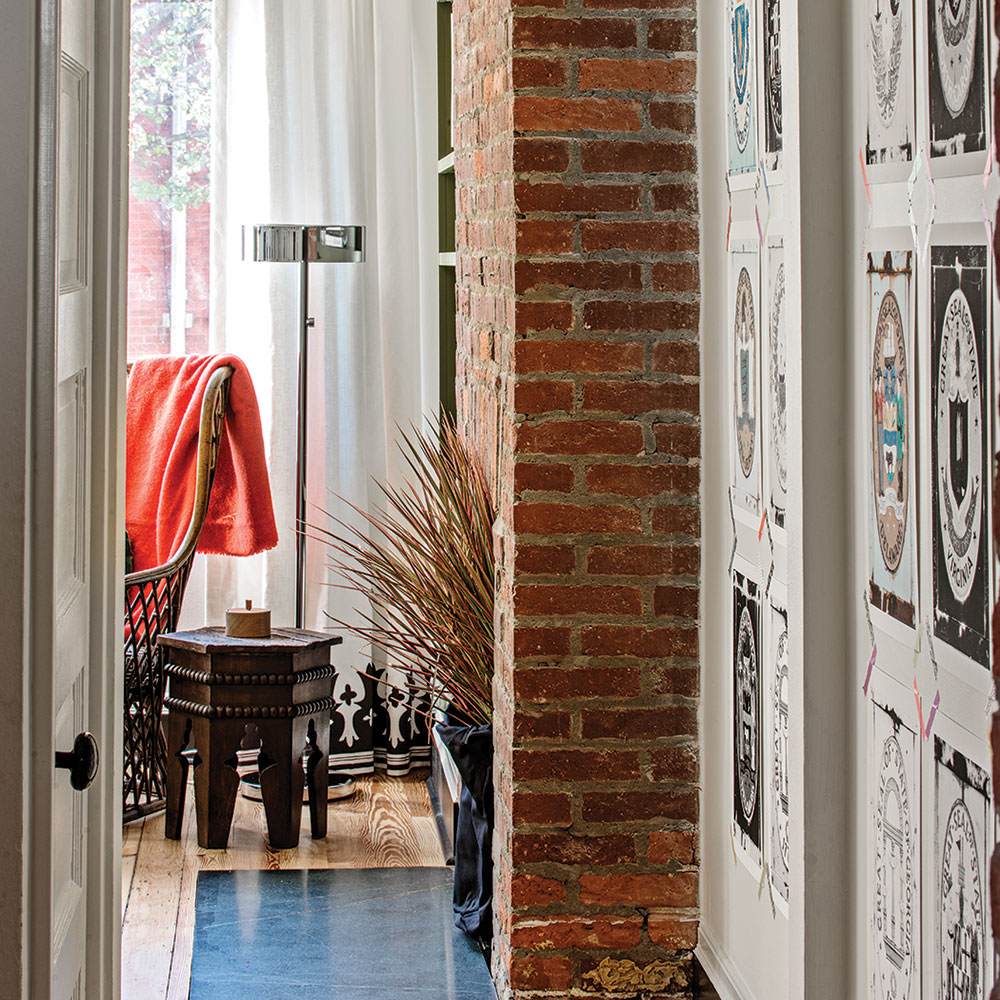 Jarold, who owns B. Jarold & Co. design firm, hung prints of the medallions in floor-to-ceiling grids on the first-floor walls. The prints serve both as a design focal point and as a foil for her colorful Bohemian-meets-Mid-Century-Modern renovation, which comes complete with Herman Miller plywood chairs and Schumacher Chiang Mai dragon-print fabrics.

“It’s completely different from the historic medallions, but somehow it works,” she says. “It’s saying to the house, ‘We’re both things.’” 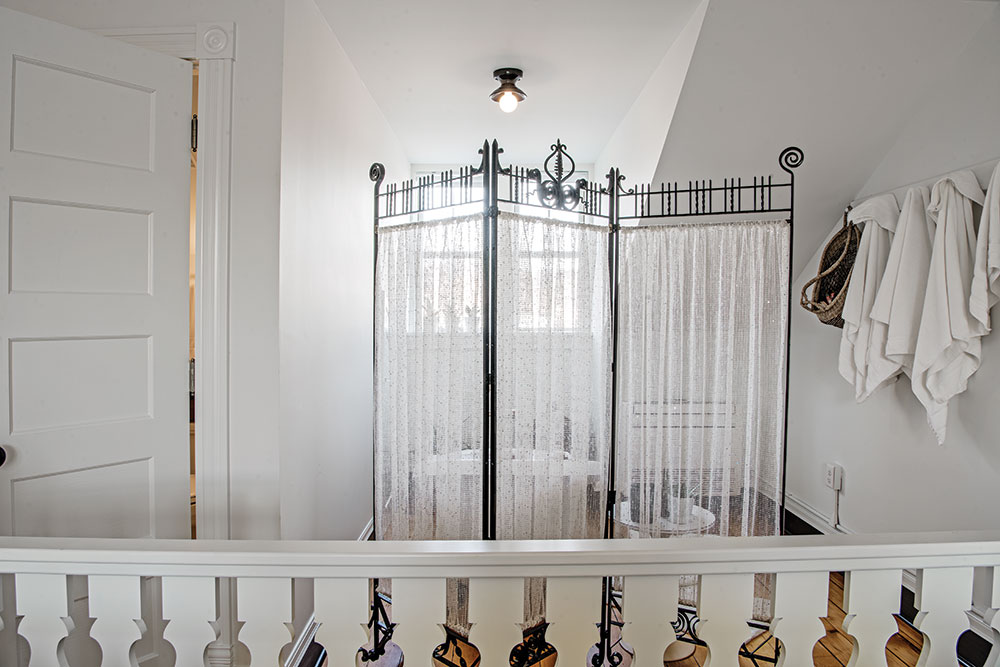 Jarold’s offbeat renovation is what she calls an unflip, or a renovation that updates what’s needed and embraces what works.

And, in this three-story, turn-of-the-century home, a lot already worked. She repaired the original pine floors and gave them a natural satin finish. She restored the existing dormer, ripping down the aluminum siding to expose the traditional wood facade and Victorian fan design. She kept the original floor plan and replaced damaged trim with custom pieces that mimicked the original.

“A lot of people do not understand that they do not have to do that much to an existing structure to make it beautiful and respect history,” she says. “Any contractor can slap up something modern. To me, it’s a story about who was in this house and what was done to it along the way.” 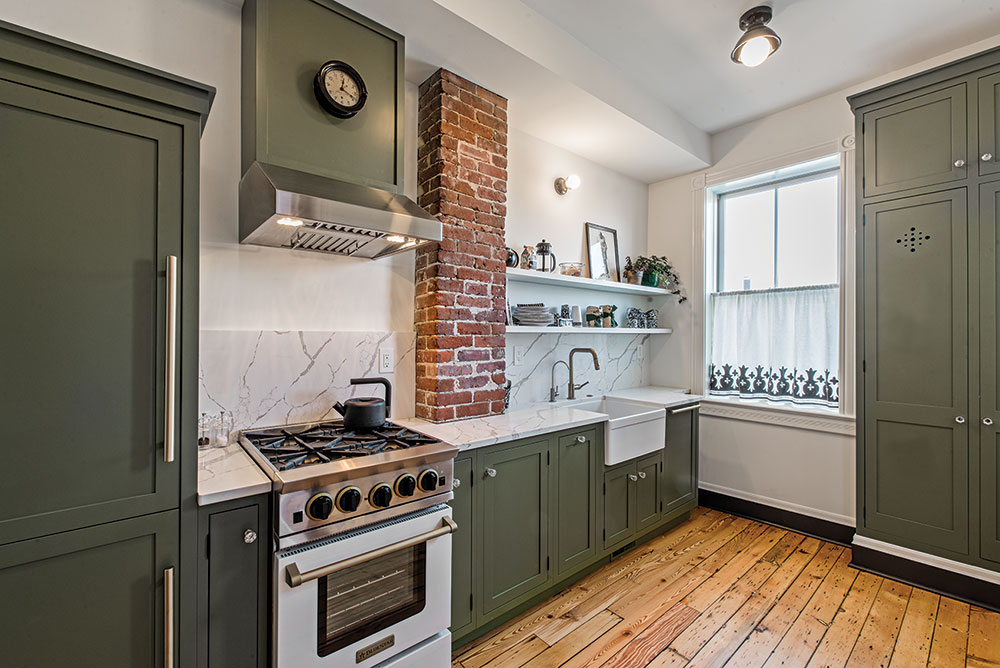 But sometimes what was done along the way doesn’t make a lot of sense. Take the kitchen window, for example. A previous owner, in a bid to maximize storage space, covered the window with a cabinet. Jarold ripped it out, allowing natural light to once again bathe the room. She then installed custom cabinetry and apartment-size appliances in order to fit the entire kitchen on a single wall, making the room appear larger than it is.

The cabinets are painted “a gorgeous historic green with a lot of pigment” that echoes the grass now visible through the newly uncovered window, she says.

That green is replicated throughout the home in floor-to-ceiling bookshelves, live plants and circular, green throw pillows. The repetition, Jarold says, aids the flow of the design and builds relationships between rooms and materials. 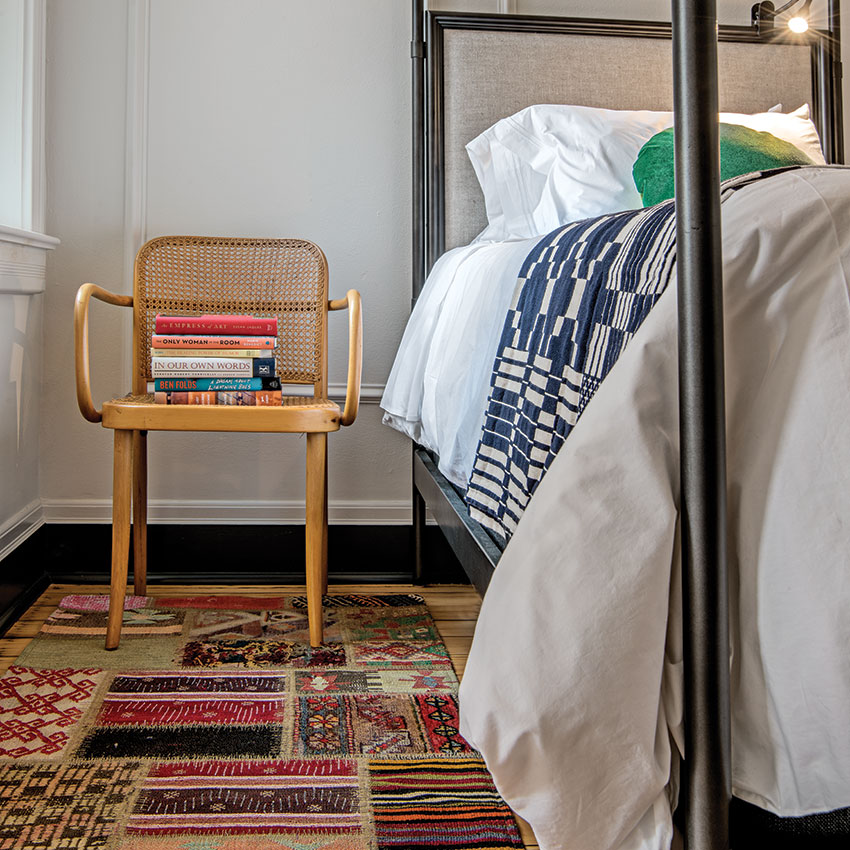 Because she is keeping the house as a part-time residence and sometime Airbnb, Jarold wanted to keep costs down. The unflip not only gave her financial limits, but allowed her to focus on creating a timeless design.

“It’s always about what came before and how I can tap into that in a creative, funky, fun way,” she says. “My house, my design, will stand the test of time; it will hold up.” 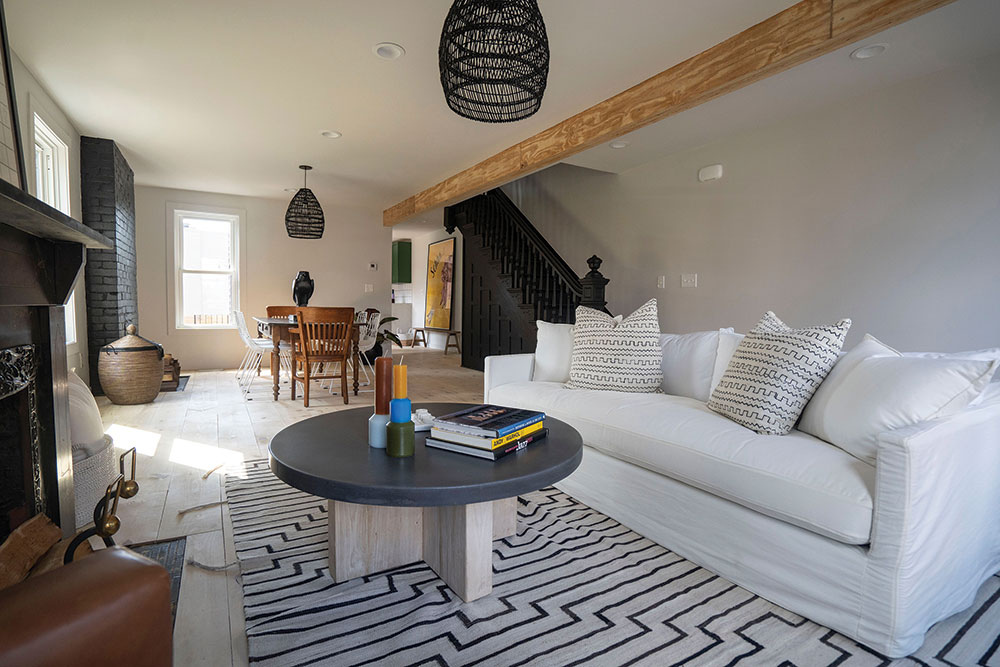 Renovating a home in a historic district comes with a unique set of challenges: design restrictions, reams of paperwork, public hearings and the occasional litigious neighbor. In the 10 years Heather Johnson and Camden Leeds have been renovating homes in the city’s Mexican War Streets, they’ve experienced it all.

So although their latest North Side project was of the gut-it-to-the-studs-and-start-over variety, comparatively, it was a breeze. 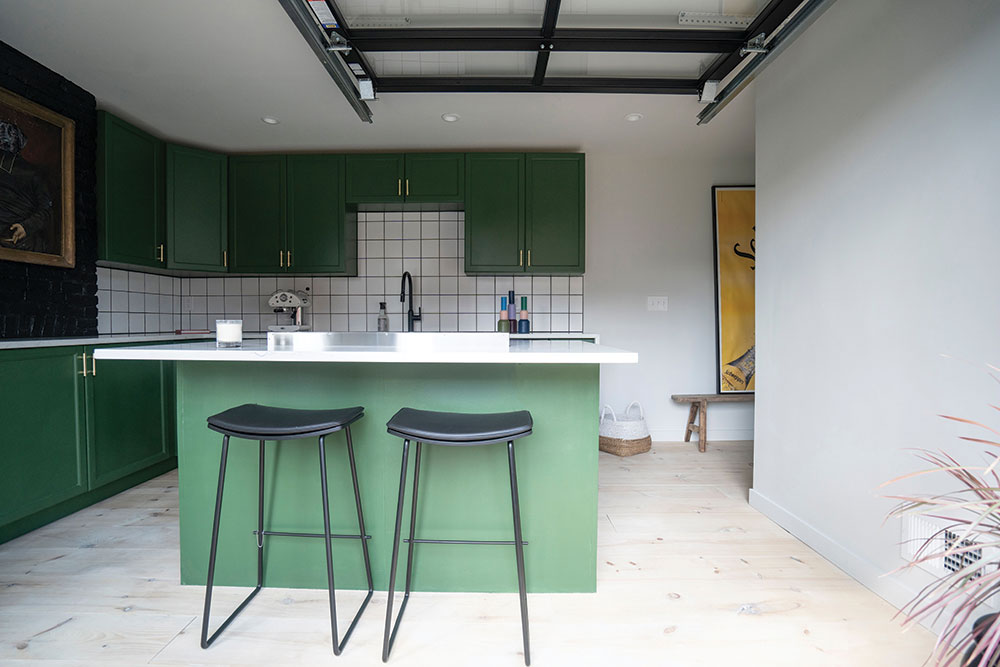 “This was actually one of our easier projects,” Johnson says.

When the couple purchased the Arch Street home in 2018, it was empty and dilapidated, sitting on an overgrown lot between a structure in even worse shape and a well-maintained brick house. But it didn’t take long to spot a few salvageable gems — including the fireplace mantles, a vintage sink, the original staircase and a solid-wood door with a brass mail slot —  that would offer a bit of character to the contemporary plan they had in mind.

“The goal is always to make the homes super modern, but to keep some of the original character,” Johnson says. 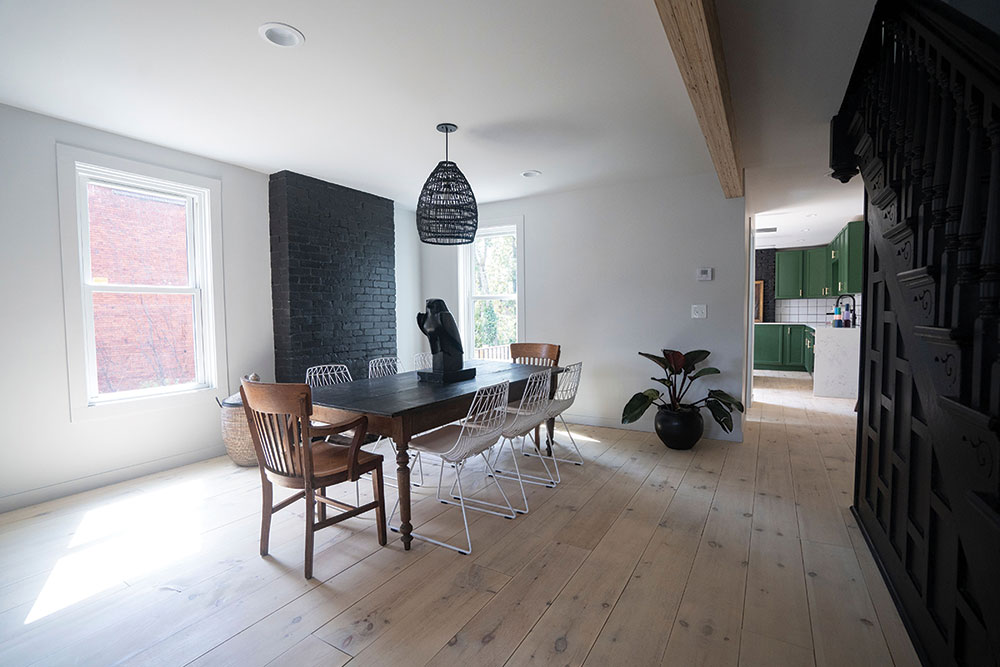 Gutting the house also revealed wood beams in the bedrooms and a loft space, which they kept open in the final design.

Because this home, at about 1,500 square feet, is a bit smaller than their previous projects, they wanted it to feel bright and airy. To accomplish that, they used one of their signature design elements — a garage door that opens onto a porch with a view — to capture natural light (photo, lower right).

But they also tried something new. This renovation marks the first time the couple has strayed from a black, white and gray motif, painting the kitchen cabinets a deep kelly green and whitewashing the hardwood floors a Scandanavian blonde. The couple also chose pieces from Weisshouse in Shadyside to stage the home that mirrored that vision, including a green leather armchair and white, wire dining chairs. 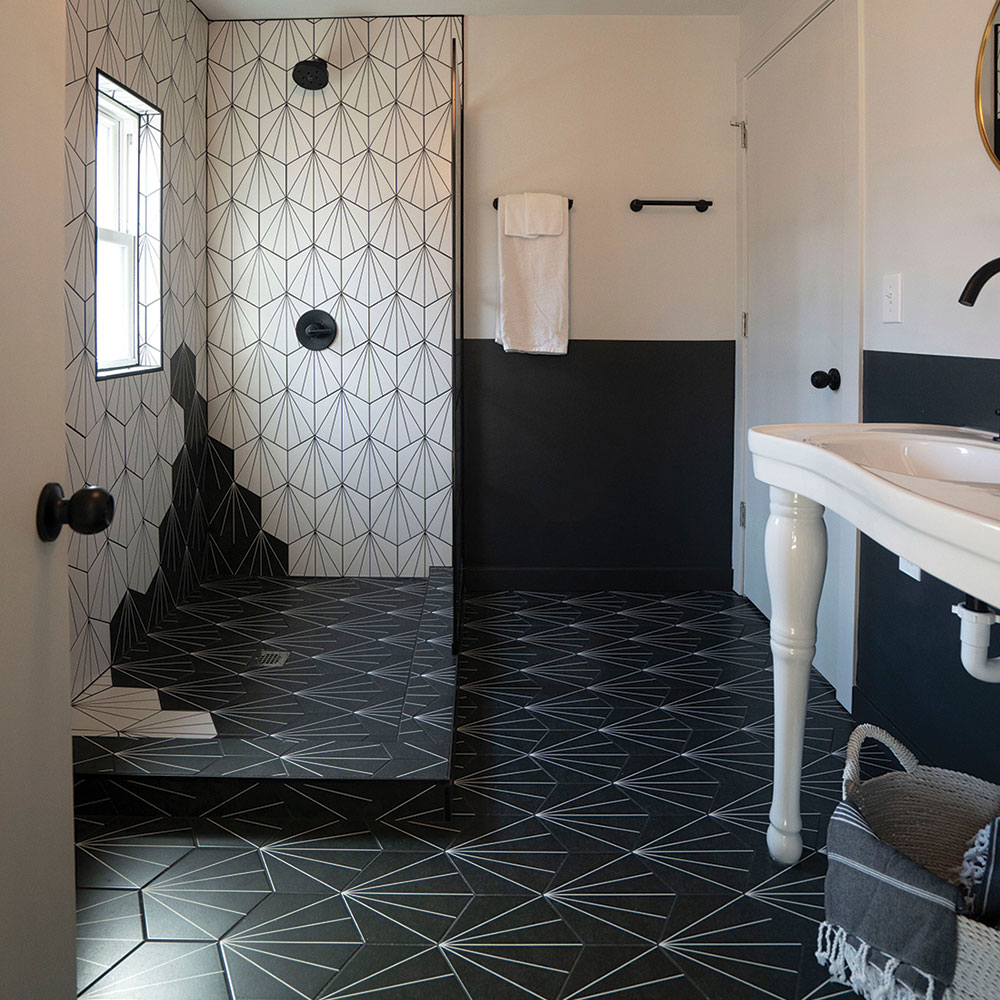 But Johnson couldn’t completely abandon her black-and-white ways. So the two bathrooms boast intricate black-and-white tiles and the siding is an eye-catching, midnight black.

“I’m obsessed with black facades and black houses,” Johnson says. “And it fits Pittsburgh, too, with its steel history.” 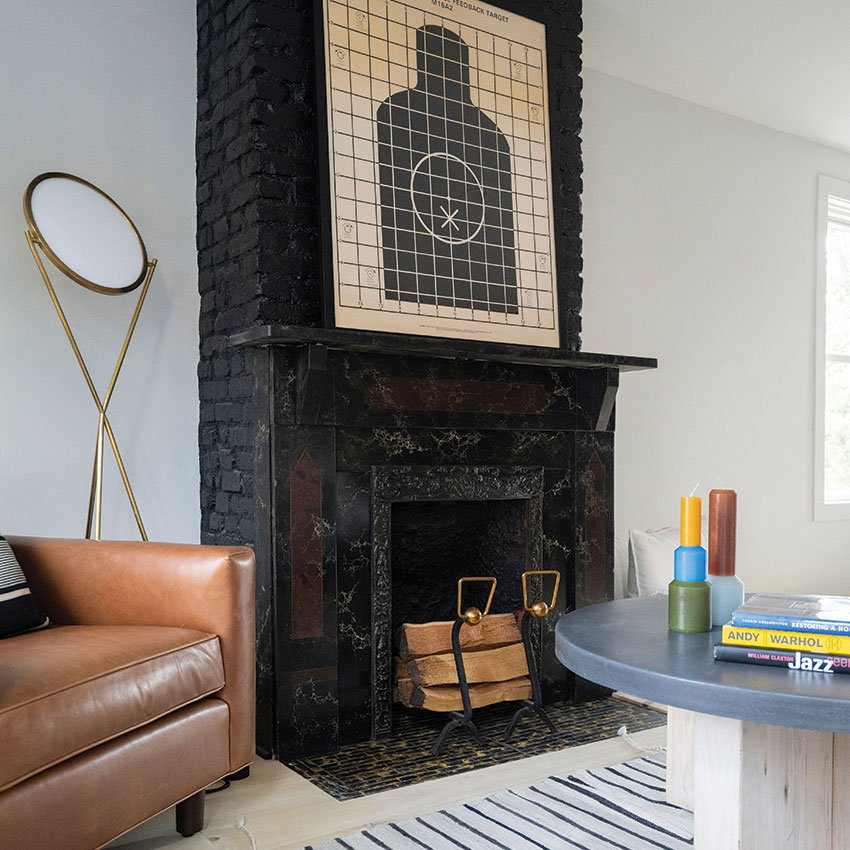 Though Johnson and Leeds are not professional designers — Johnson owns Alchemy Dry Cut Lounge in Lawrenceville and Leeds is a graphic designer and owner of 1412 Design House — their renovations have earned them accolades, including the Best New Home title in Pittsburgh Magazine’s 2019 Best of Design contest. They’re already eyeing their next flip. 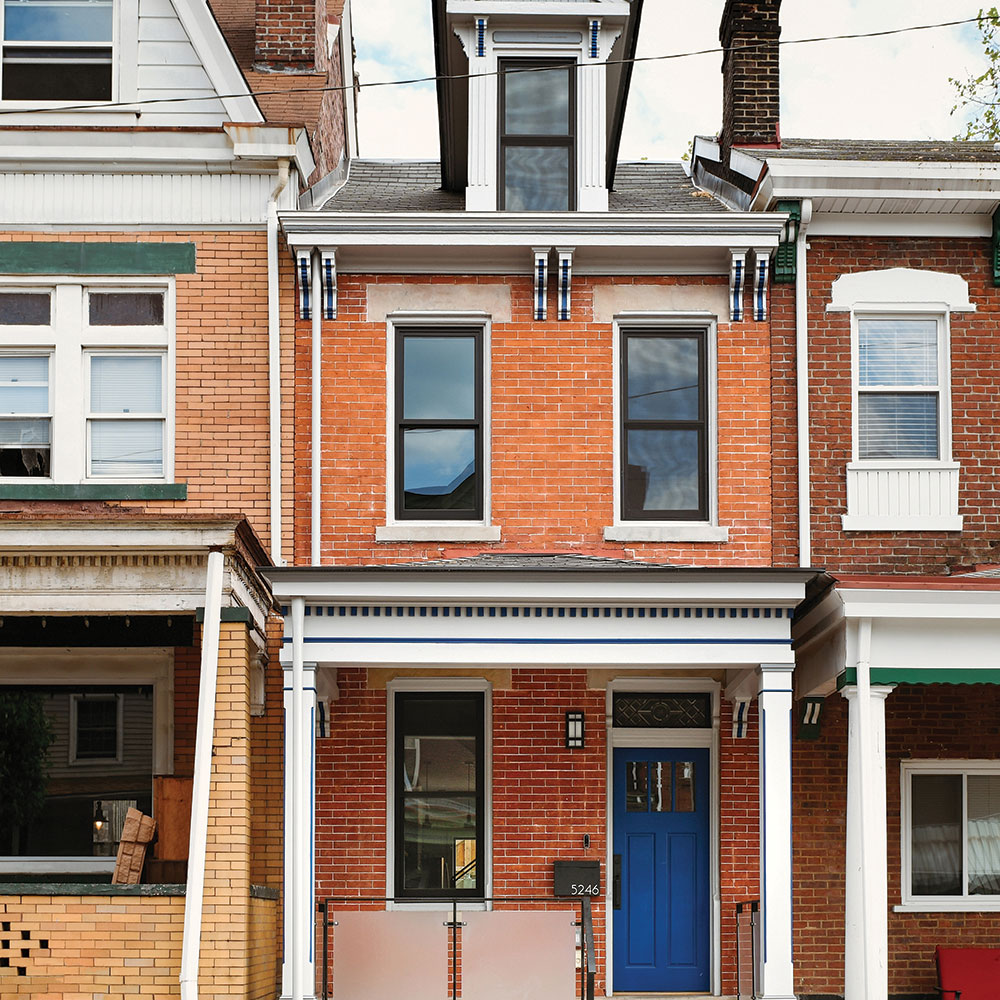 With so many of his real estate investment ventures located in Lawrenceville, it was only a matter of time before Michael Boyle made the move from New York City to Pittsburgh. So when a tiny row home in Upper Lawrenceville came on the market two years ago, located on the same block as his best friend’s place, he jumped on it.

And while the location was ideal, the home was in less-than-stellar condition. The interior was poorly lit, with dark paint and carpeting, the third floor was unusable and the small, rear addition had so much termite damage contractors predicted it would collapse within the year. 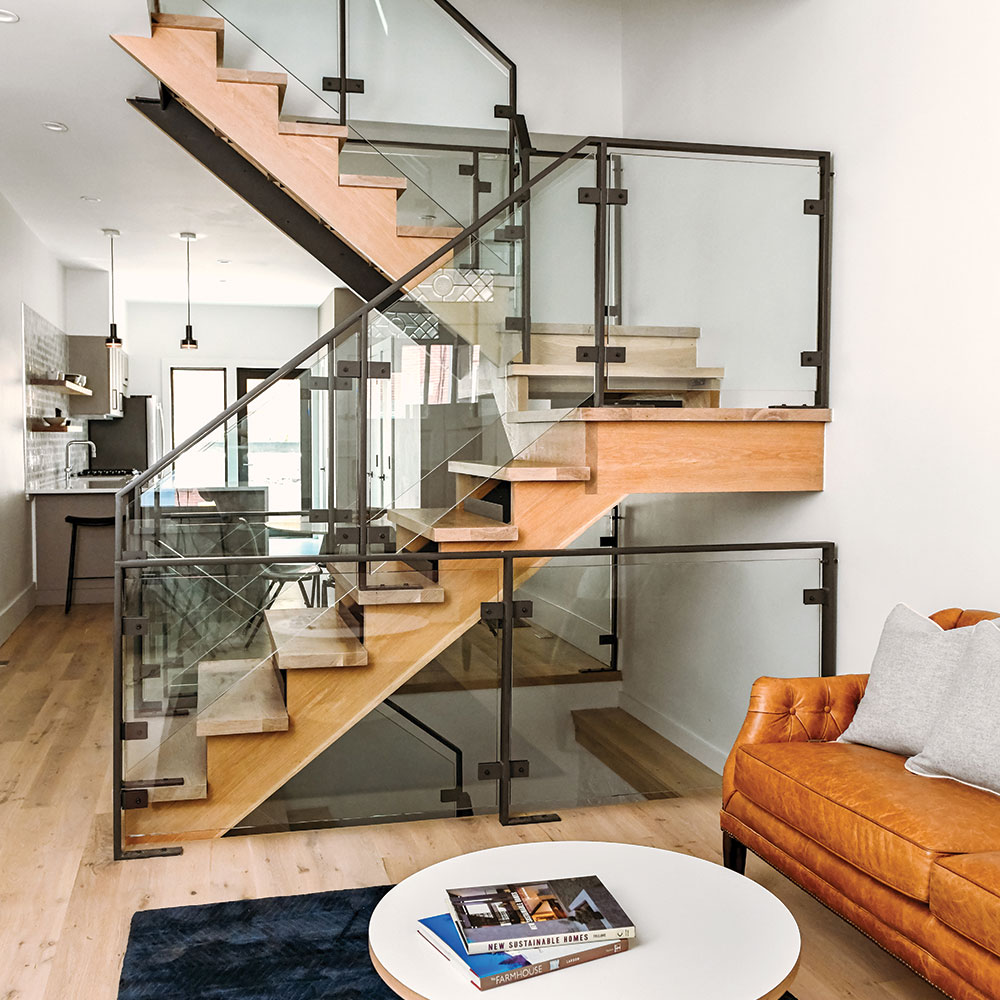 Enter mossArchitects. Boyle had worked with the Pittsburgh-based architecture and design firm on several commercial projects, and he had no doubt they’d be able to turn his outdated row home into a modern marvel.

“They are just incredibly thoughtful and creative,” Boyle says. “I’ve worked with many architecture firms, including in New York City, and Andrew Moss’ team is world class.”

Architect Katie Seftas and interior designer Gina Konopack helmed the project, and they knew immediately that it would be a challenge. The home is just 13 feet wide and, because it’s a row house, has no interior windows. 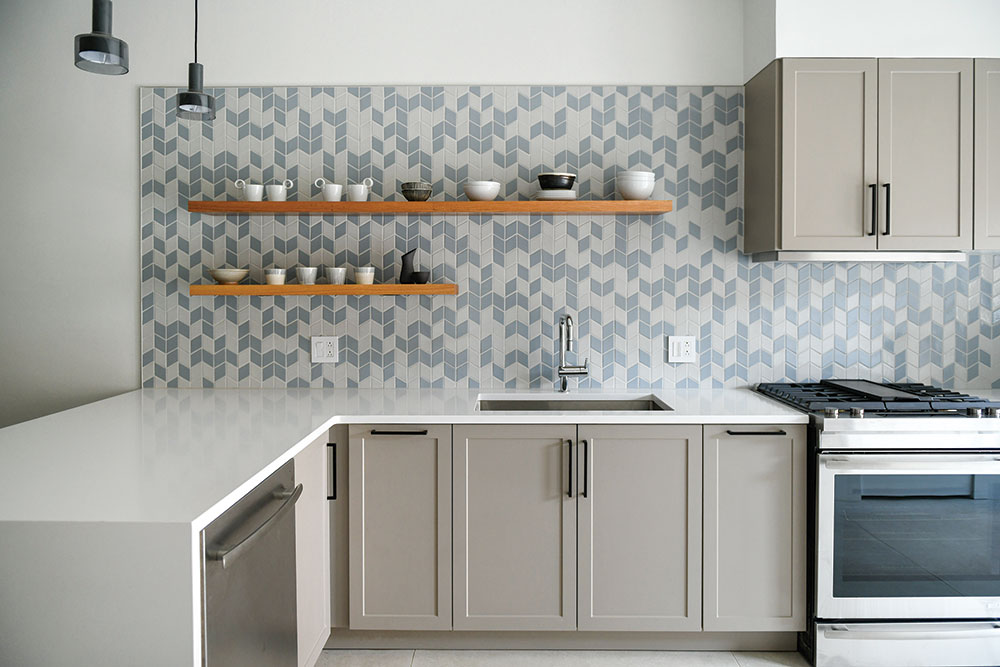 “It was really about maximizing space and bringing in natural light,” Seftas says.

The space challenge was addressed by removing the home’s chimneys, which gave the living spaces additional square footage, and replacing the damaged rear annex with an ultra-modern, three-story addition that not only created a third-floor master suite, but also a design duality that allows the modern and traditional to happily co-exist.

“The rest of the home is very modern and beautiful, but if you look at the home from the front, it looks like someone just repointed the bricks and painted the trim,” Boyle says. 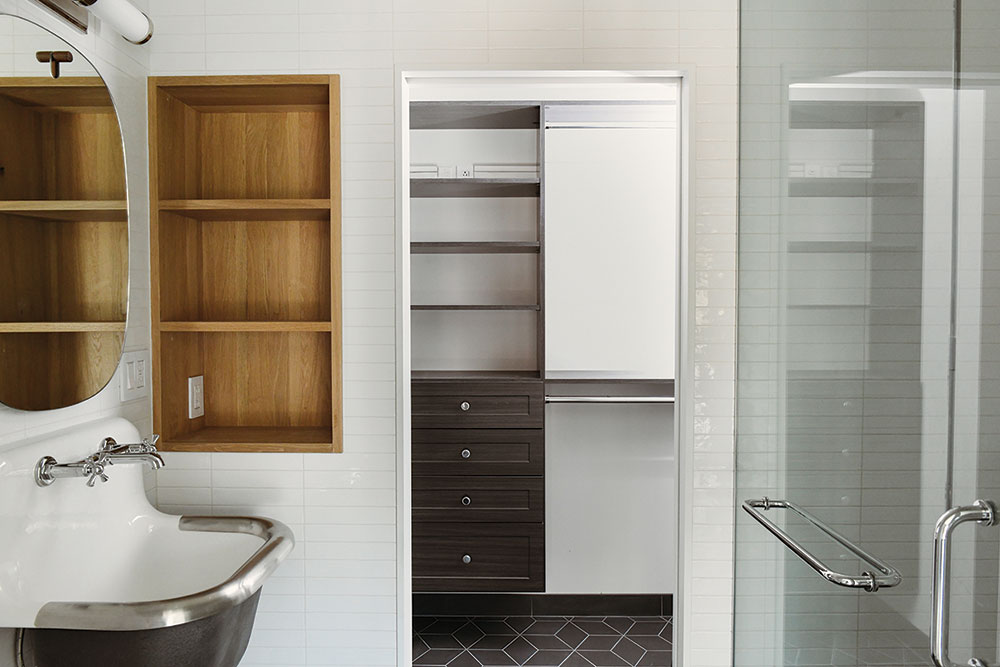 The lighting took a similarly clever design sleight of hand. Seftas created a central staircase that climbs from the basement to the third floor and topped it with a large skylight. Because the glass, steel and white oak staircase is open, natural light filters down through all three floors.

In the main living area, she knocked down the interior walls so light could flow from front door to back door. 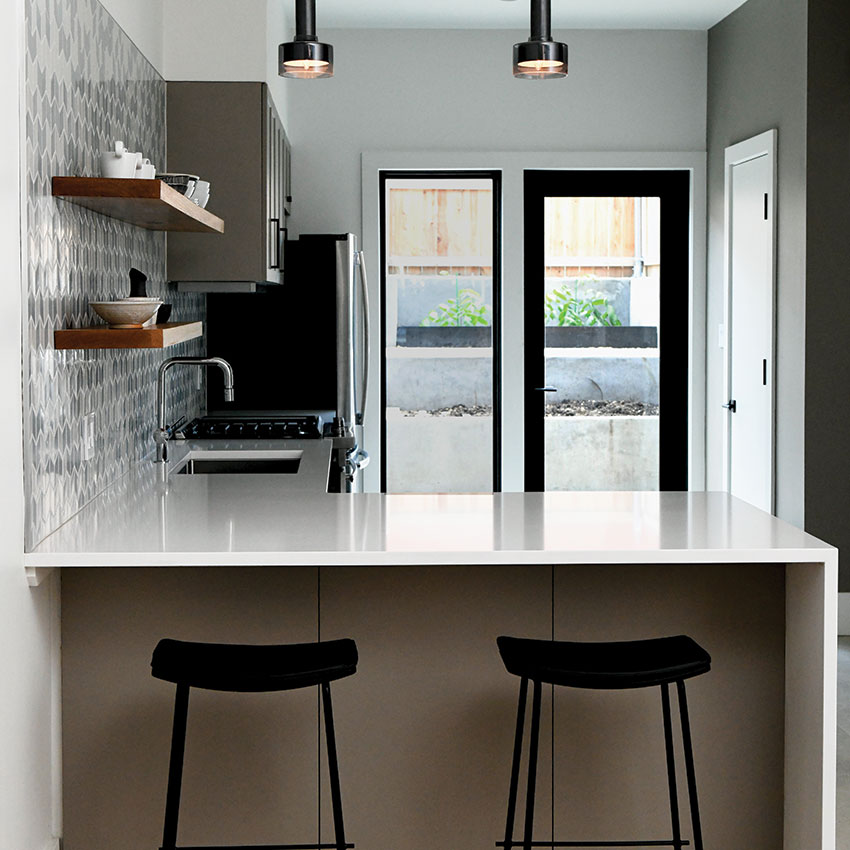 Konopack used a neutral palette throughout the house to keep the rooms bright and airy, but added random, unexpected patterns — such as the custom chevron backsplash in the kitchen — and pops of bright blue — like the front door and first-floor powder room — to maintain visual interest.

Despite the interior transformation, Boyle and the designers all point to the back yard as a favorite spot. Once a steep, overgrown green space and a crumbling retaining wall, it is now a terraced garden with lush green plants that, like the rest of the home, is both eye-catching and functional. Connecting the indoors to the outdoor space are new large glass windows in the kitchen.

“I don’t have a lot of free time and with as much as it rains in Pittsburgh, if I had a yard, it would be a jungle,” Boyle says. “But now I have two distinct planters that I maintain and it’s incredibly easy. I love it.”

This article appears in the July/Aug 2020 issue of Pittsburgh Magazine.
Categories: From the Magazine, HOME + Design, Hot Reads