“Racial tension had been at a crazy high. I wanted to do my part and came up with an ice cream flavor with proceeds given back to a nonprofit.” 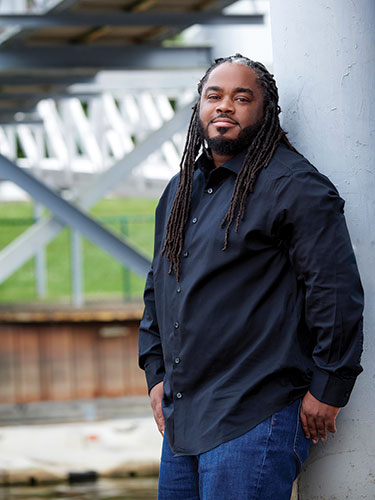 Cue Perry has a sweet deal. Encouraged by noted Pittsburgh artists Baron Batch and Darrell Kinsel of BOOM Concepts to pursue art full time, the former early-education worker teamed up with Millie’s Homemade Ice Cream to create gelato flavor “Blackout Brownie,” which was launched during Black History Month last February. Half of the proceeds from sales of the pints (still available at Giant Eagle Market District and Millie’s locations) benefit 1Hood Media, a nonprofit collective of artists and activists fighting for social justice.

“Racial tension had been at a crazy high. I wanted to do my part and came up with an ice cream flavor with proceeds given back to a nonprofit,” says Perry, whose pieces have since been displayed at Pittsburgh International Airport and the University of Pittsburgh’s Center for Urban Education, among others. “I knew about the work 1Hood Media did, so it was a no-brainer.”

Perry, whose works visually deconstructs pop culture and promotes thinking outside of the box, continues to act as a mentor for kids. Besides speaking to students at local school districts, Perry has acted as the artist-in-residence for educational programs.