Hall’s role is focused on: “making sure that I’m advocating and supporting and providing resources, both individually and school-wide.” 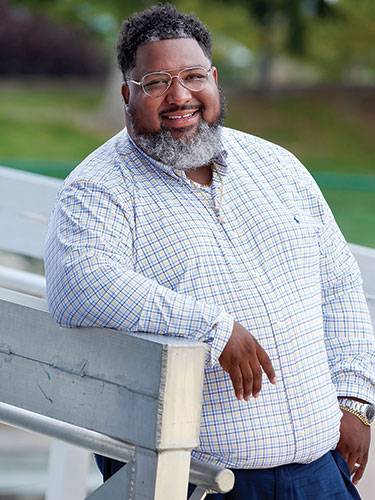 The role of a school counselor goes far beyond conversations with students. While individual relationships are important, Anthony Hall says, his position is focused on “making sure that I’m advocating and supporting and providing resources, both individually and school-wide.”

Hall credits his success to the influence of his wife, Makia Hall, and his former teacher and friend, Steven Singleton.

“I was homeless at 18,” he explains. “At those times, my wife and Steven brought me through this journey, together.”

Hall is the lead counselor at Westinghouse Academy, where he’s also the assistant football coach; he’s been involved in youth football for more than a decade, calling it the “mental balance that I need.” In his prior position at Allderdice High School, he sponsored the African American Centers for Advanced Studies, among several other appointments. A student who served on that organization’s council, Gianna Griffin, went on to Yale University, where in 2019 she nominated him as an Educator of the Year.