“The secret sauce of Pittsburgh is that people here default to yes instead of no." 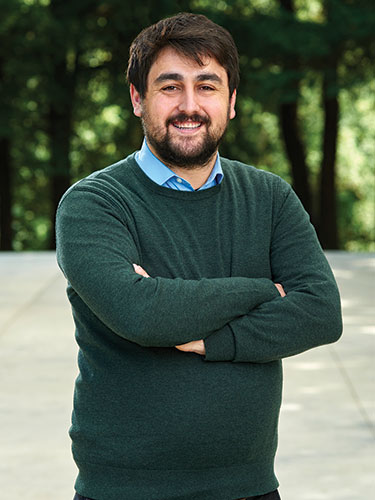 Imagine if getting an annual flu shot or treatment for cancer was as simple as placing a bandage on your skin. Emrullah Korkmaz has developed a device that actually makes that a possibility. Korkmaz is an engineer working as an assistant professor at the University of Pittsburgh’s School of Medicine, trying to bridge the gap between the fields.

“I believe engineering thinking can make a big impact in healthcare, but we need to get everyone to speak the same language,” he says.

Korkmaz’s new device, a microneedle array, is an example of doing just that. It turns out the intramuscular injections that patients are used to receiving aren’t really ideal for vaccination because muscle tissue does not have a high density of immune cells. Skin, on the other hand, does. So his device uses the skin as a more efficient — and less painful — way of delivering vaccines and training the immune system. Korkmaz, who began his career in Turkey, has found Pittsburgh the perfect place to conduct research that pushes traditional boundaries.

“The secret sauce of Pittsburgh is that people here default to yes instead of no,” he says.