You Won’t Believe Where This Man Took His Terrible Towel

A guy named George takes global Steelers fandom to the next level. 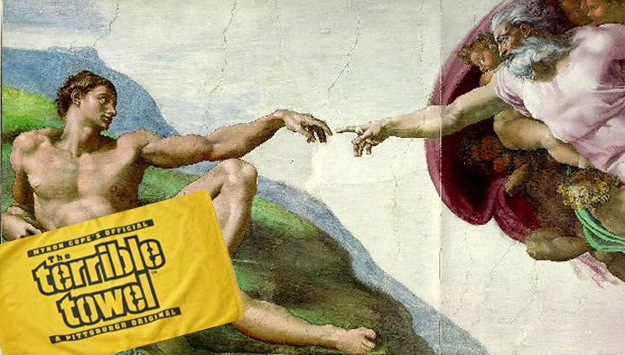 I love YouTube. Sure, there are some things I don't love about it—particularly my ability to get sucked into a YouTube wormhole for hours on end because I keep clicking on related video after related video until what began as a hunt for a video of a memorable hockey goal ends with me watching the strangest Alaskan Eskimo celebration ever.

And don't get me started on the time I let my space-obsessed son watch videos of Saturn V launching only to have him click on a video of the Challenger exploding. That was a plot twist he wasn't expecting.

What I love about YouTube is that we can all be broadcasters so that the world can share in the amazing things we create, see, film or experience—things that otherwise never would have left the four corners of our homes.

It was in a "related video" YouTube wormhole where I stumbled on this video of a Steelers fan named George and his wife Ann traveling the globe on a 12-country, nine-month world tour. Naturally, they brought along their Terrible Towel. Watch as they twirl the Towel everywhere from Thailand to Hawaii. From Australia to Belgium. From Morocco to China, leaving in their wake a multitude of confused locals wondering what the crazy Americans are doing.

The only thing that would have made this better was if he was filmed trying to outrun the stampeding elephant herd all the while twirling his Towel.

But you shouldn't risk your life for your love of the black and gold … Much.

This article appears in the November 2011 issue of PittGirl.
Categories: PittGirl