The immaculate three-bedroom home in Kennedy has two custom decks. 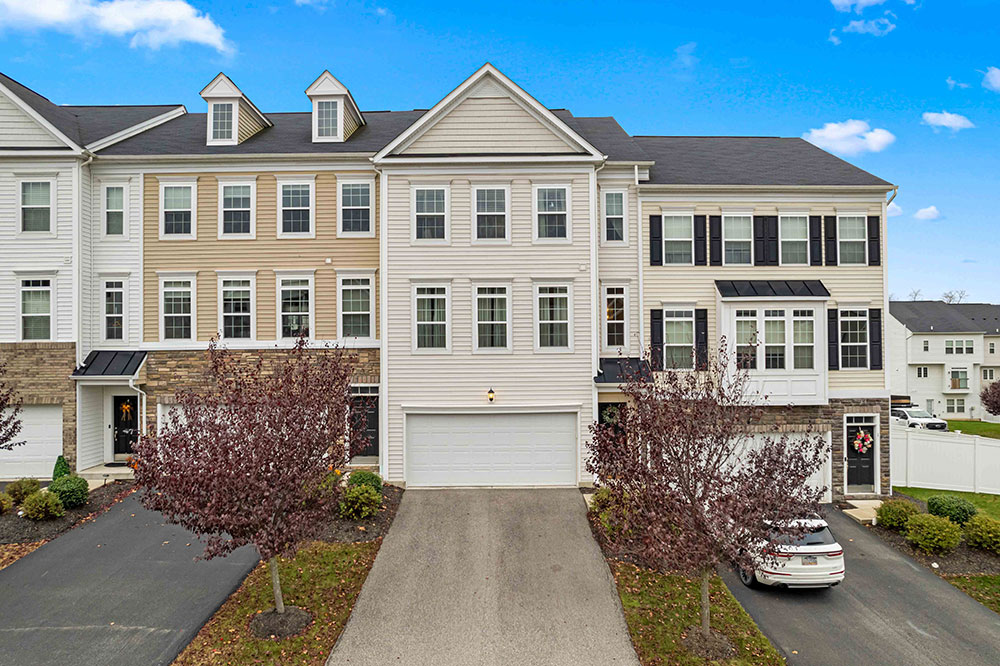 After buying their first home in 2016, Pamela and Domenic DiPaolo took it on a joyful six-year journey.

As they were planning their fall wedding that year, they decided to focus their house hunt along the Interstate 376 West corridor.

“That morning, we looked at a house in Green Tree,” Domenic says. “Pam wanted to check out Kennedy Highlands before we put the offer in there, but when we walked in this home, we just knew we wanted it.” 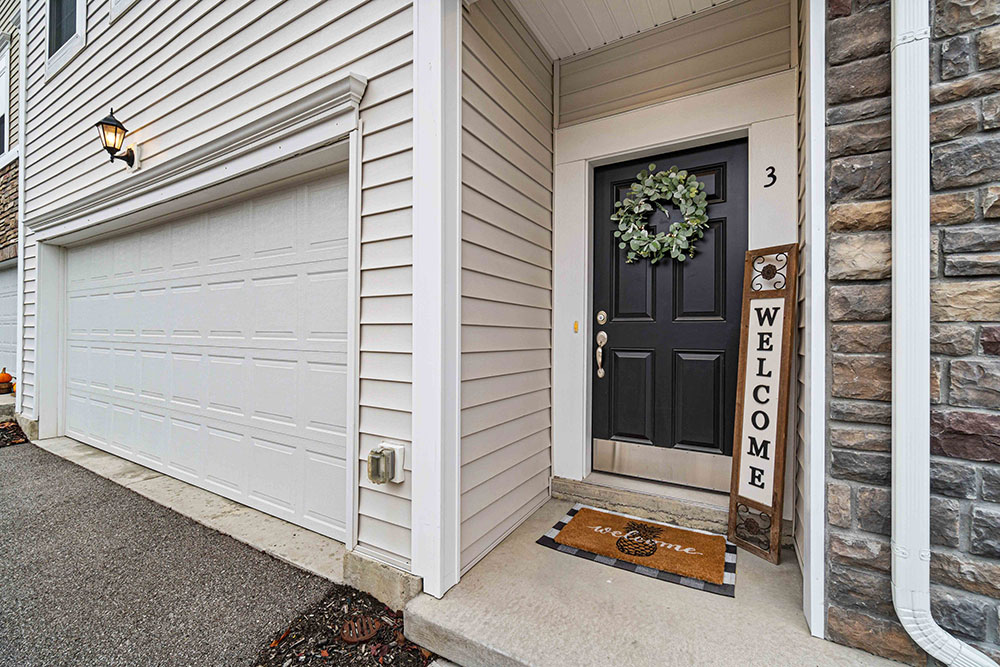 Built by Ryan Homes, the townhome at 3 Roosevelt Drive had three bedrooms, 2½ bathrooms and an unfinished basement. The energetic couple had the opportunity to put their personal touch on some of the finishes, and they wasted no time transforming the unit.

“We closed in August, married in October and had painted the main floor before we hosted the holidays,” Pamela says. 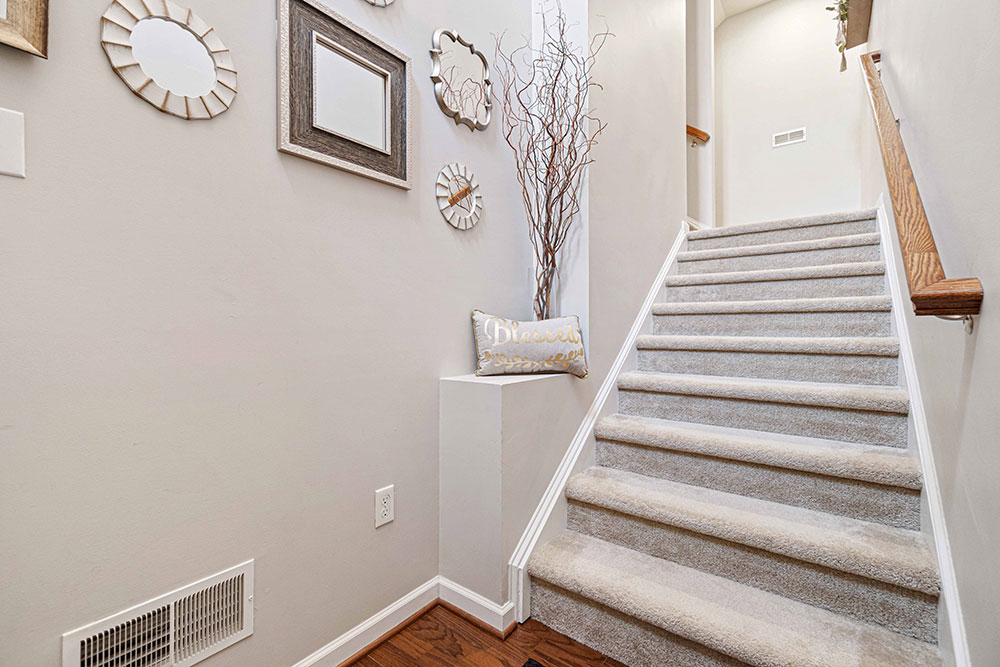 The middle unit’s exterior features a combination of vinyl siding and brick. Inside, the entry showcases the recently remodeled, spacious living area, which accommodates a large sectional couch, media area and workspace.

“We just finished it in 2019. I have to brag on Dom for a minute,” Pamela says. “He had this vision for the space; he also added a half-bath and a full closet down there. We used Square One Renovations to do the work and he told them his concept.” 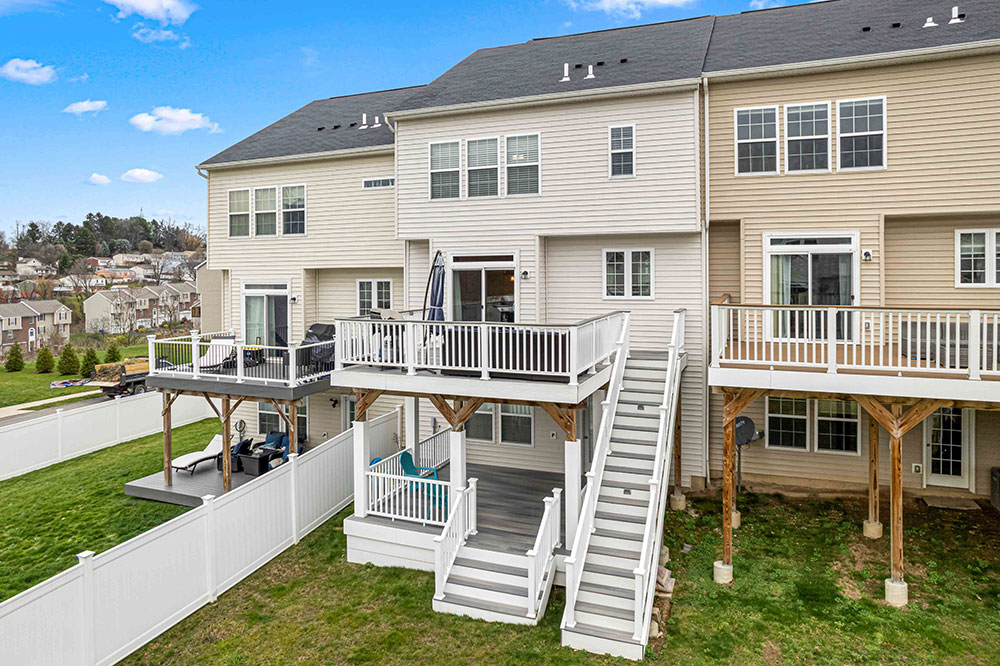 That vision included a walk-out deck that, along with the second-level deck, provides more than 300 square feet of extra outdoor living space.

Both decks have low-maintenance vinyl railings, Trex decking and wood “Y” beams. The builder also constructed the lower deck on a raised platform, which will add years to the life of the structure because it’s off the ground.

“In the summer, we spend at least two nights a week just watching the sunsets over the trees,” Domenic says. “They are unbelievable, how pretty the skies are.” 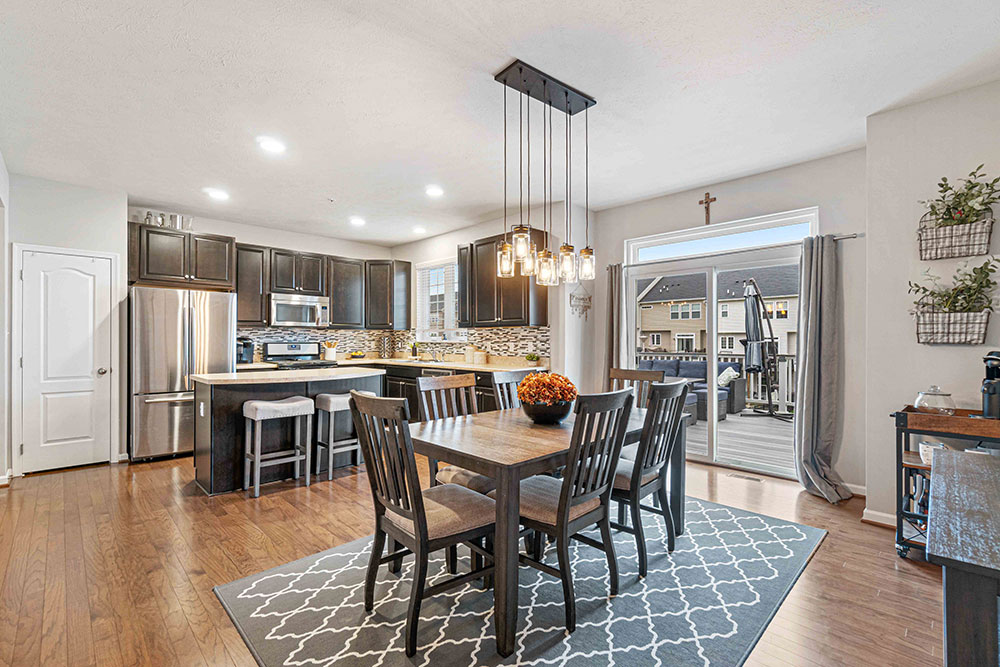 The home’s main level features an open-concept kitchen with on-trend espresso-hued cabinets, a glass tile backsplash and a kitchen island. Stainless-steel appliances and hardwood floors run through the dining area, with a table for six. Updated lighting, plus a large sliding door, fills the kitchen with lots of light; It also has those great evening views of the couple’s beloved sunsets. 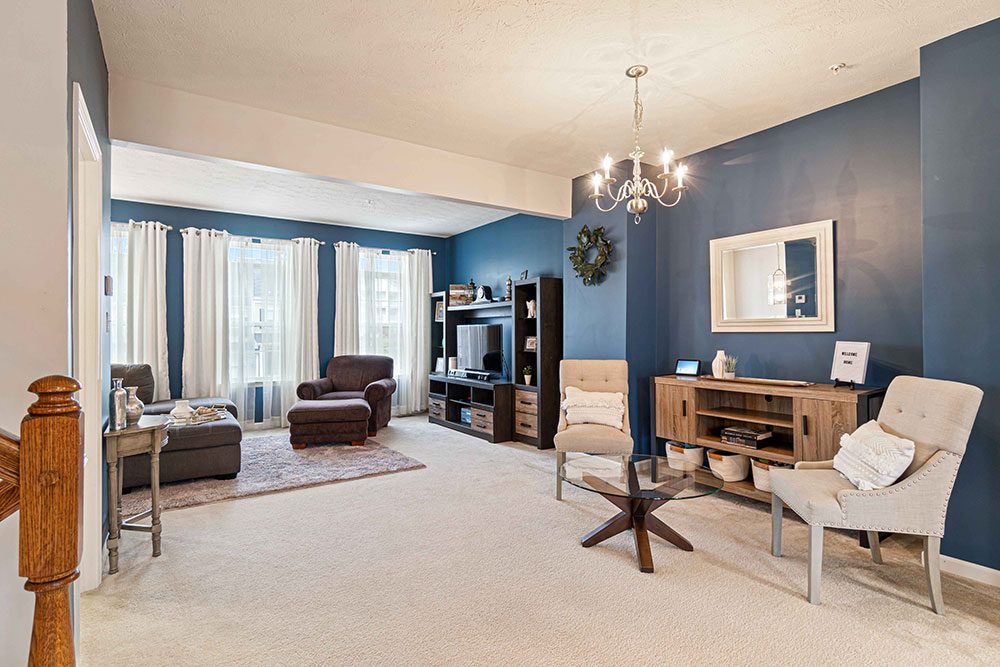 Cobalt blue walls set the tone for the sitting and living room, where there’s a cozy seating area and a generous wall unit that provides plenty of storage for the busy family. Another powder room rounds out the main level’s offerings.

“It’s been a blessing to have the open-space concept and keep an eye on the kids,” Pamela says. “They are at that age that they are getting into everything.” 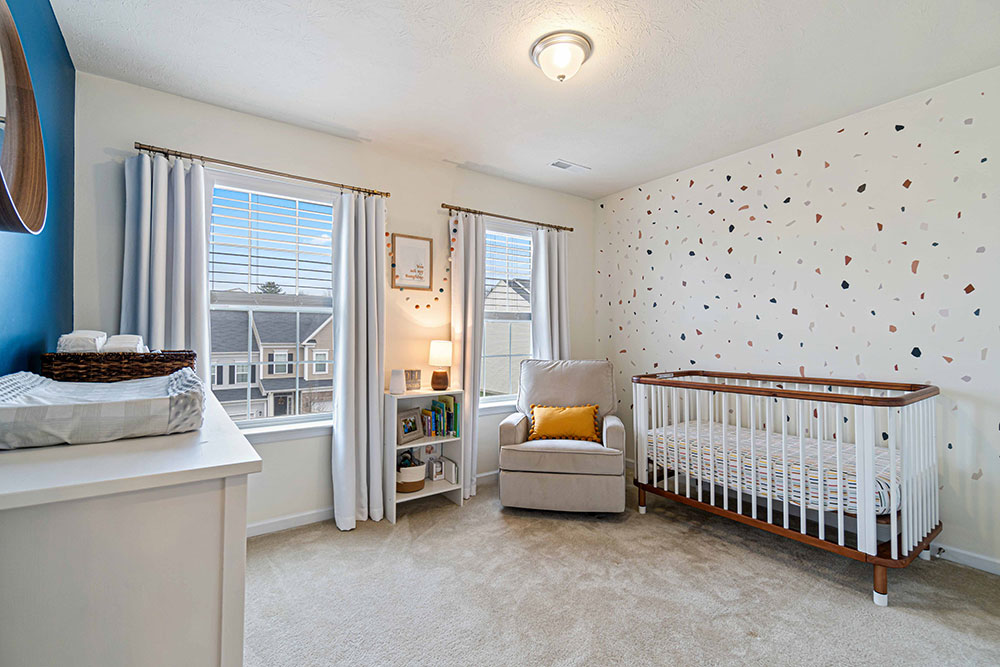 The second bedroom is outfitted for the toddler and features blue walls. Painted a muted green-gray, a full bathroom in the hall services the kids and features a wood vanity with a solid surface top. 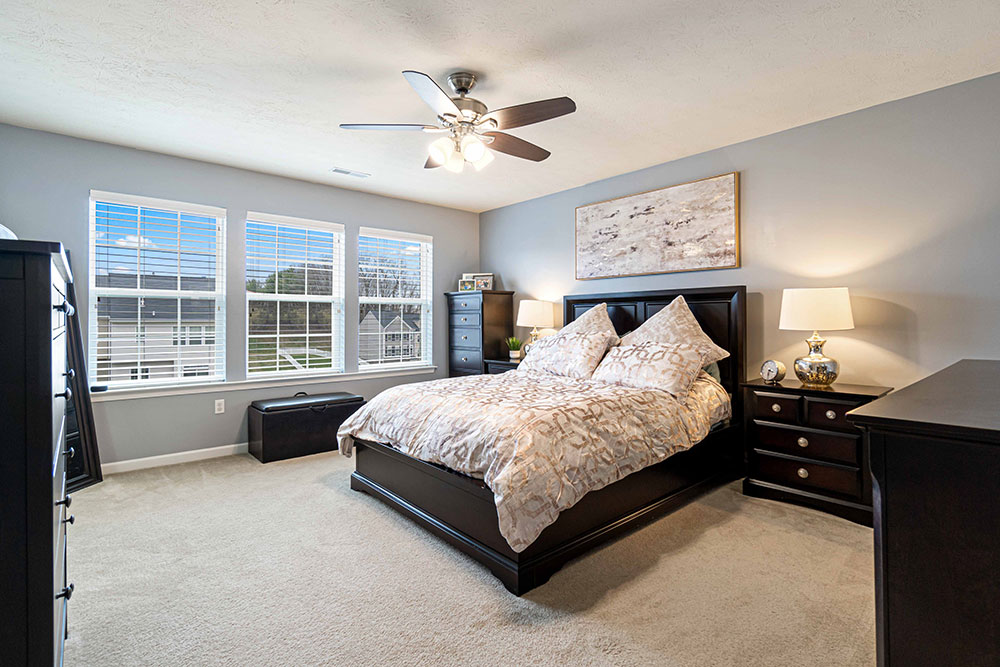 The primary suite was the couple’s retreat after a busy day. Situated in the front of the home, a trio of windows fills the room with natural light. Adding to the zen environment is a  gray-and-white paint scheme.

The ensuite bathroom checks all of the boxes, thanks to a large walk-in shower with glass doors, a separate soaking tub, a double-vanity sink and porcelain tile in neutral colors.

“The soaking tub is great after a stressful day,” Pamela says. 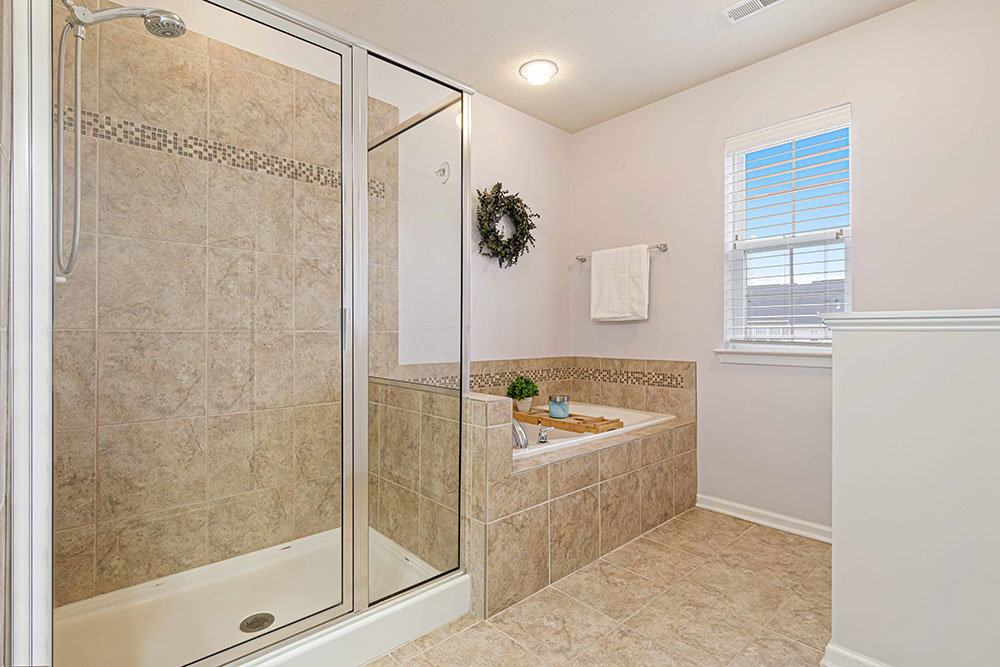 The laundry is in a hall closet, which made life a lot easier for the couple, who say they’ll miss its convenient location.  That’s not all they’ll miss.

“Every summer we go to North Carolina,” Pamela says. “This house reminds us of being on vacation with the sunsets and the open, airy feel. It’s like a little escape from the world when we are here.”

About: Kennedy (kennedytwp.com)
Population: 8,701
Planes, Trains & Automobiles: An 20-minute commute to the airport. Daily transport via Pittsburgh Regional Transit. Street parking. Rideshare.
Schools: Montour School District (montourschools.com)
Neighborhood: The area’s proximity to several interstates, as well as an easy commute Downtown, make Kennedy a desirable place to live. Founded in 1787 when James Speer was granted a land patent from Pennsylvania founder William Penn himself, Speer promptly built a brick farmhouse on the property and called it Kennedy. Today, the growing community is home to several large churches and recreational areas and is minutes from the massive Settlers Ridge retail development.