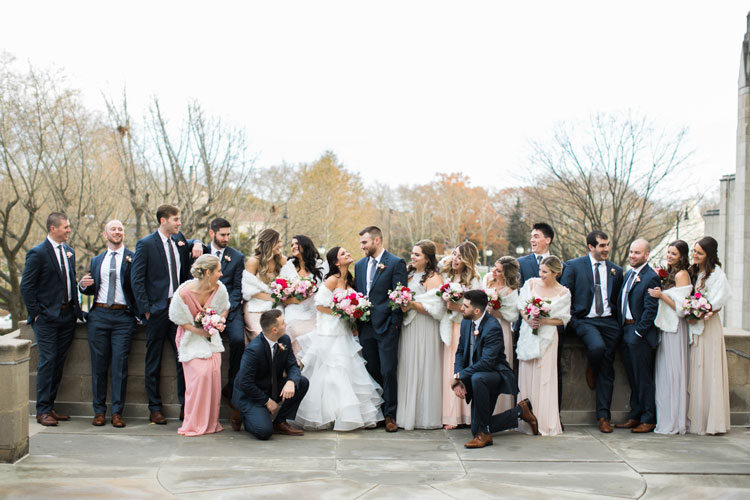 “We spent years walking around that campus, so it was a no brainer to have our wedding at Heinz Chapel and our photos taken there,” Tori says of their Nov. 11 wedding. “It really meant a lot to my husband and I to have it where our relationship started.”

She says their photographer, Steven Dray, chose most of the spots around the Cathedral of Learning.

“He did our engagement photos Downtown and really understood what we were going for,” she says. “The pictures are everything I could ever have wanted and more. We really just wanted a city-chic look.” 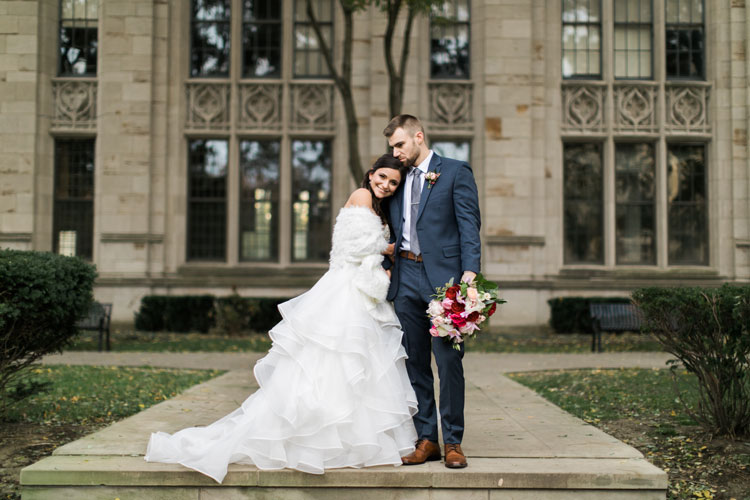 Another aspect of their photos that meant a lot to the couple came as a surprise. When they received the proofs back from their photographer, they were shocked to find he had taken pictures of a white owl they didn’t even know was there.

Tori explains that her grandfather, who was Slovak, passed away shortly before her wedding. His last name, Sova, means owl in Slovak, and whenever her family sees anything with an owl they think of her grandfather.

When she asked her photographer why he snapped those photos, he said it’s really rare to see an owl in that location.

“To see that in our wedding photos, it’s really heart-stopping,” Tori says. “It’s really, really cool that he was there for the whole time.” 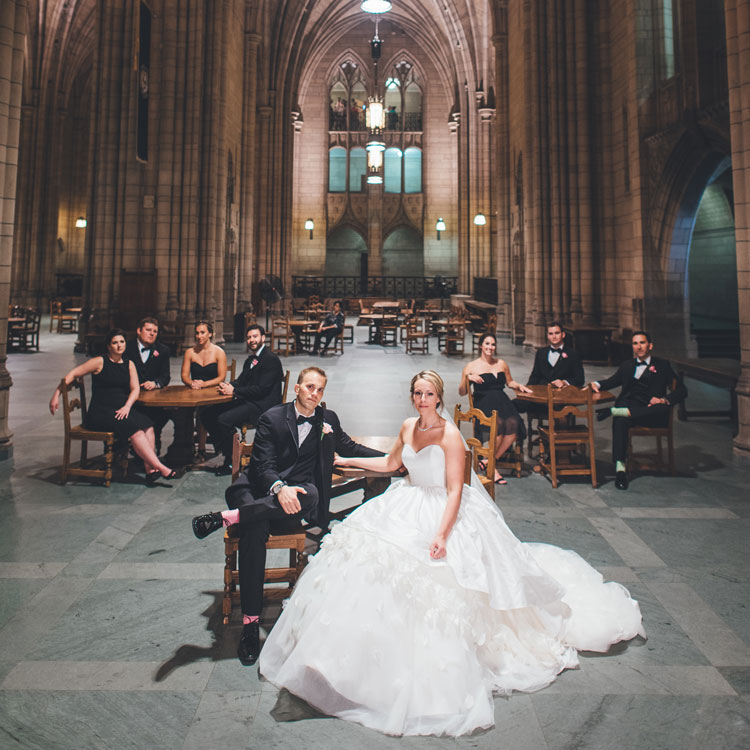 Mike Degenhart and Summer Kostelnik’s wedding on July 1 paid homage to their alma mater in many ways. The two met at Pitt, where Mike was a cheerleader, and Summer attended undergrad and law school there.

“We’re Pitt die hards through and through,” she says. “We actually live in D.C. now, but we still have season tickets.

“Pitt’s campus is kind of like home for us … so it only made sense to have our wedding at Heinz Chapel.”

The weather forecast didn’t look promising, so the couple decided to take pictures inside the Cathedral of Learning. 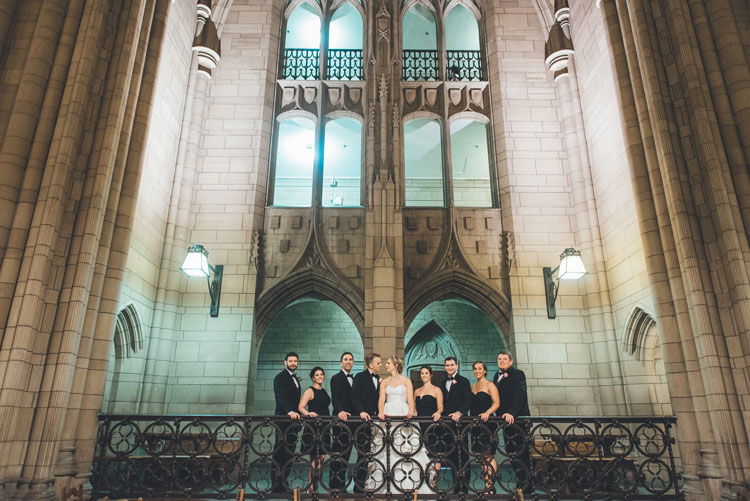 “It’s so iconic for the University of Pittsburgh; it made sense for us to get our pictures in there,” she says. “We loved the way the Cathedral ones turned out. They’re not your standard bridal party photos.

“Our photographer was actually from Florida and he was like, ‘Are we allowed to be in here? What is this building?’” Summer adds with a laugh.

At their reception, they offered their guests Dave & Andy’s ice cream and Pittsburgh Popcorn with a sign that read: “I love you to Pitt and back.”

“We had a little Pitt love coming through even in the desserts,” Summer says. 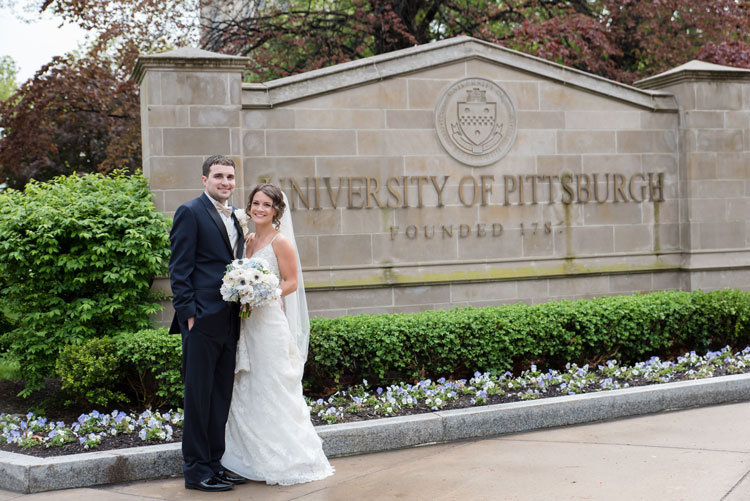 Anthony Sperdute and Christine Jazwinski’s love story began at Pitt, when they met at a party while Christine was a senior and Anthony had just graduated. They even got engaged on campus, in front of the Cathedral of Learning in 2016.

On April 29, 2017, they married at Heinz Memorial Chapel, and before heading to their reception at the Embassy Suites in Moon Township, they made sure to get some photos in front of their alma mater.

“The cathedral itself — it’s one of the most important buildings in Pittsburgh to us,” Christine says. “We actually go back every year on our engagement-versary.” 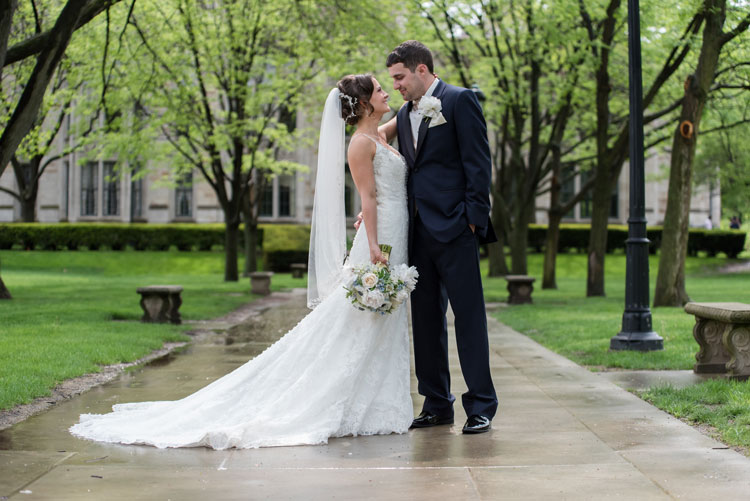 Christine says the couple talks a lot about how they could have chosen any other college but they both chose Pitt and ended up together because of it. That, combined with the fact that the college years help to shape who you become, really made their choice of venue important to them.

Christine wore a Pitt garter and Anthony wore Pitt socks, and their color scheme was navy and light blue as a subtle nod to the school.

“We really wanted that kind of to be the theme of our wedding,” she says. 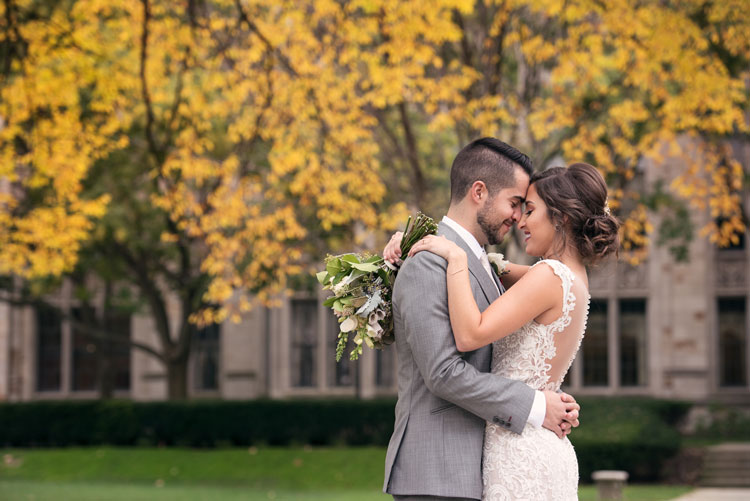 “We were scoping out where we wanted to take pictures, and I think we got the majority right outside of Heinz Chapel,” Michelle says. “It kind of worked out that our wedding was when it was the best foliage.” 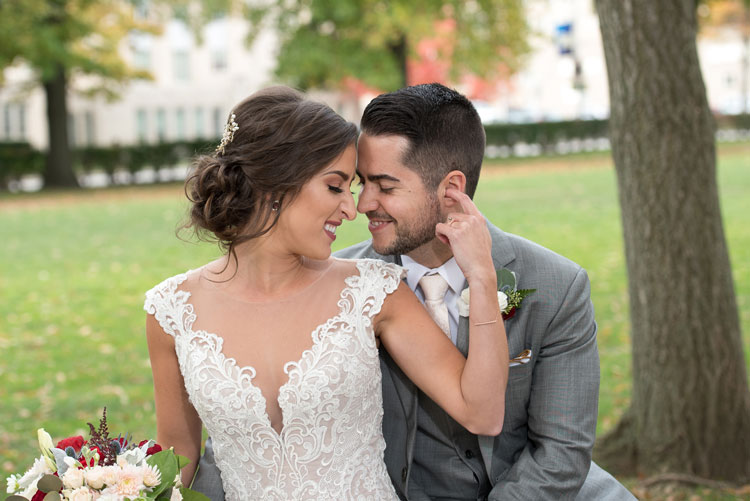 They scheduled two hours to have portraits taken around the city after their ceremony, and Michelle says it couldn’t have worked out more perfectly.

“When we met with [our photographer], we told her exactly what we wanted; we wanted natural shots, candid shots. We goof around with each other all the time and we wanted that to come through.”

“Everything just fell together it was all like meant to be, it was the right lighting, the right colors, the campus wasn’t very busy,” she says. “It was just so much fun.”