All the fun words that PittGirl's dastardly editors cut from her print column. 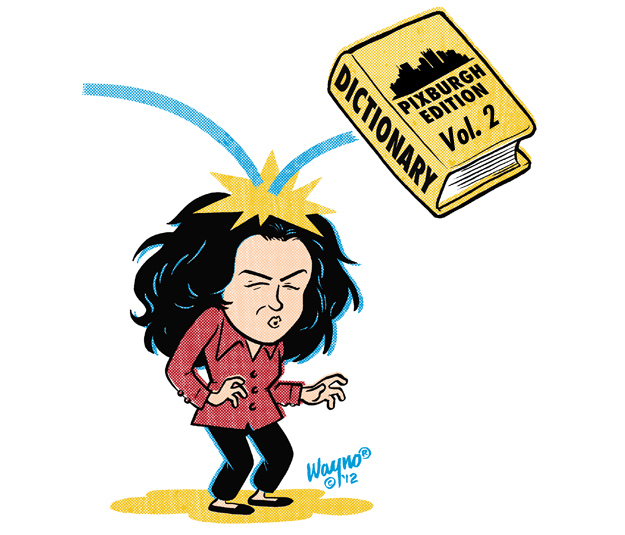 Word limit is my enemy. Every month without fail, I write my Pittsburgh Magazine column and get halfway through everything I want to say right about the time I hit my word limit. By the time I'm done, I'm so far adrift from my assigned count that I need a lighthouse and GPS to find the sucker.

This was particularly true for my most recent column about the etymology of Pittsburgh's words and phrases. Here are some that didn't make the column due to space. This data was taken from Dr. Bert Vaux's research during his time as a professor at Harvard. You can find the survey results here, but Dr. Vaux was kind enough to send me all of the data so that I could pull out the answers from southwestern Pennsylvania.

Lane changes
When asked what we call it when a driver changes lanes way too quickly, Pittsburgh was right with the rest of America, calling it a Chinese lane change (6 percent) or a Chinese fire drill (11 percent). 83 percent of 'Burghers said they refer to it as "other." I'm guessing "jagoffs."

DIBS!
Most 'Burghers lay claim to the front seat of a car by shouting "shotgun" (68 percent), while 22 percent say "dibs."

Anymore
More 'Burghers (14 percent versus only 5 percent of Americans) found the sentence "I do exclusively figurative paintings anymore" to be acceptable English. I'm one of the 86 percent of 'Burghers who cringe at that like I'm hearing nails on a chalkboard.

Whip it
When asked, "What do you call the activity of driving around in circles in a car, Pittsburgh was right with America in saying it's called "doing donuts" (80 percent). But what's interesting are the two other terms that Americans use: "doing cookies" and "whipping shitties." I bet the latter is what they call it in Arkansas.

Mary/Merry/Marry
This one is crazy because THEY ARE ALL PRONOUNCED THE SAME. My family sat around the dinner table the other night trying our hardest to make "Mary," "merry," and "marry" sound different, and we all failed. I thought my father was going to have a stroke trying to do it. Because we’re intelligent, 63 percent of ’Burghers say all three are the same, compared to 57 percent of Americans. Now, 17 percent of Americans say all three are different, but only 8 percent of ’Burghers do. However, 15 percent of Pittsburghers say "Mary" and "merry" are the same, but "marry" is different, and 15 percent say "Mary" and "marry" are the same, but "merry" is different. That's ridiculous. Unfollow!

Caramel
Americans are split on the two-syllable "car-ml” (38 percent) and the three-syllable "carr-a-mel" (38 percent), but in Pittsburgh we heavily favor the "car-ml" pronunciation (56 percent) to "carra-mel" (22 percent). I'm a "car-ml" girl myself.

Bugs!
The question, "What do you call the little gray creature that looks like a bug and that rolls up into a ball when you touch it?" resulted in a wide variety of answers. "Roly poly" was the most common answer for Americans in general at 33 percent, but here in Pittsburgh, the most common answer was what I call them, "potato bugs" (27 percent), followed by the "pill bug" at 16 percent. Other names given were doodle bug, sow bug, basketball bug, twiddle bug and roll-up bug. There were also some ’Burghers who have lost their minds because they call them "millipedes" (2 percent) and "centipedes" (3 percent).