Why You Should Know: Kelauni Cook

Disheartened by too often being the only African-American female in a room mostly full of white, male software developers, Cook has a mission to help Pittsburgh work toward inclusivity in the field. 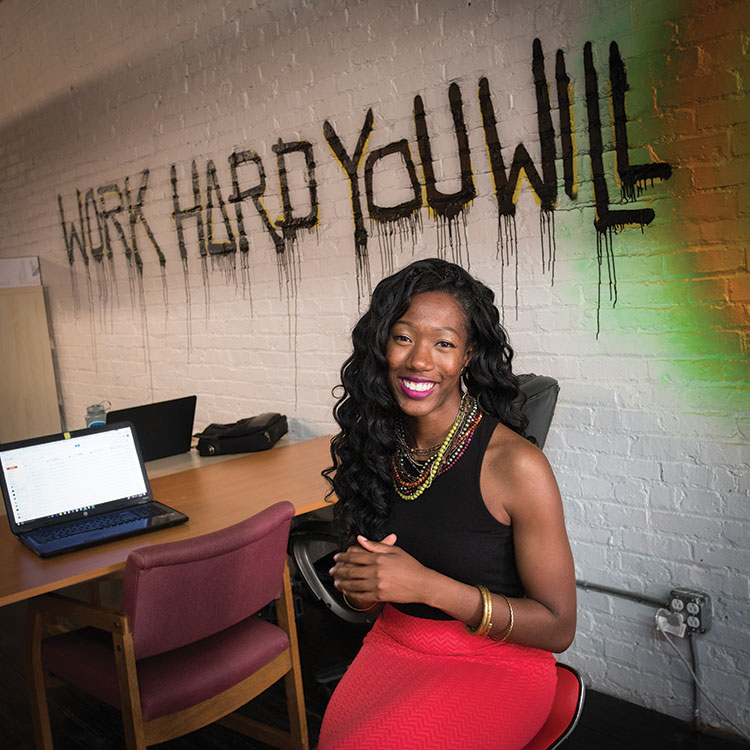 About: As a pre-med student, Kelauni Cook spent some time in her early 20s traveling and independently exploring international public health practices. A few career changes later, she learned to code at the Academy Pittsburgh Engineering Boot Camp, an intense course for professionals entering the tech field. Disheartened by too often being the only African-American female in a room mostly full of white, male software developers, Cook has a mission to help Pittsburgh work toward inclusivity in the field.

Cook had so much to say about her journey and her work in Pittsburgh that we just had to write more. Read her extended story here: 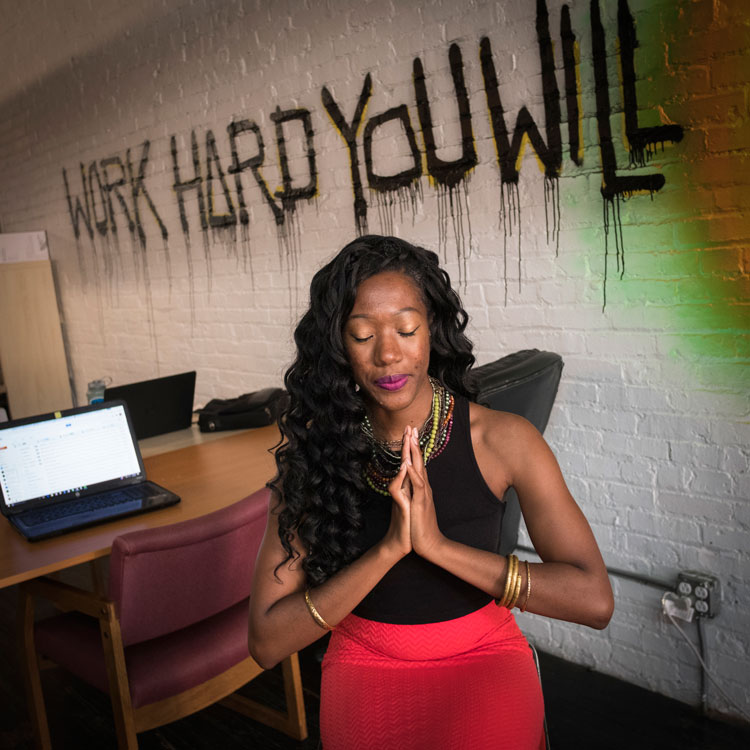 It was the first warm day in May, so Kelauni Cook decided to take an afternoon break. From the lock-secured office of Work Hard Pittsburgh in Allentown, she trekked up a steady hill for about 10 minutes until she finally reached her favorite spot.

“This is where we used to go for lunch breaks when I was at Academy Pittsburgh,” she says, ducking through a small outdoor theater space to stand at the balcony behind. She stared at the striking skyline of Downtown, the river and bridges ahead.

She came to Pittsburgh exactly one year and one month ago, she realized.

When she thinks back on her life before Pittsburgh, Cook, 28, says she’s shocked by all of the things that have changed. She never thought she would end up here, to become a software engineer and poster for inclusivity in the technology industry. In fact, she sees it as kind of a happy accident — a result of all of her adventures and her willingness to go outside of her comfort zone. In such a prominent position now, as a Coding Boot Camp Co-Director and Instructor, starting her own organization to diversify Pittsburgh’s tech sector, she can only hope to spread that same message of inclusivity.

Cook was a self-described “science nerd” from Chicago. So, when it came time for college, she decided to study biology and pre-med at Howard University in Washington, D.C.

But also she had another dream.

“I wanted to travel the world and study culture,” says Cook.

In her early 20s, Cook journeyed independently to other countries to live and explore. She especially remembers a stint as a medical assistant in a tiny desert village in Senegal. While she loved the experience, Cook says she couldn’t see a future in medicine. She found herself moving to North Dakota to help with her sister’s business and preparing to study sociocultural anthropology.

Around March of last year, Cook received a suggestion from a mentor of her sister’s: learn to code.

“I remember thinking, ‘Coding? Ew,’” says Cook, scrunching up her face at the thought. “Who wants to sit at a computer all day?”

But her sister began prodding her as well, and Cook found herself researching free coding boot camps — intensive courses that teach students to code and prepare them for the tech industry in a matter of weeks. One stood out: Academy Pittsburgh.

The idea of moving to Pittsburgh was just as unappealing to Cook as coding was — at first. As she understood it, there was nothing noteworthy in the city other than the Steelers. Nevertheless, she called the program’s director, Josh Lucas. Enticed by the opportunities and worn down by her sister, she found herself applying before the end of March.

Only a month later, she was beginning the program. 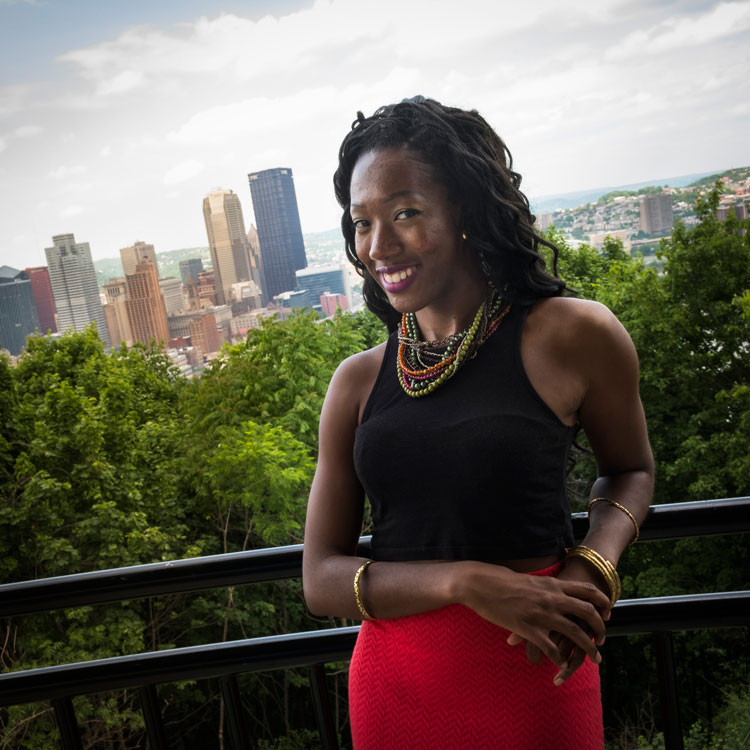 The whole year was a blur for Cook.

“It was a complete switch of my life. I had no plans of even staying in Pittsburgh, no plans of doing computer coding. But it worked, and one of the main reasons I knew after a month I wanted to stay here … I think it’s because — obviously — look at this,” she says, gesturing at the view from the balcony. “I had no idea Pittsburgh looked like this. But then on top of that, I just felt super welcome.”

Upon completing Academy Pittsburgh’s engineering boot camp, Cook got a job as a software developer based in Pittsburgh for the Washington Post. She immediately jumped into Pittsburgh’s tech scene, networking and attending events.

Cook says she felt a sense of belonging within the tech community right away — but admits that she was taken aback by the lack of African-American women at any given conference, meeting or social gathering.

“Those things come into your head whether you like it or not,” she says. “And then you start to second guess [yourself] … Is this space really for me?”

So, when she heard about Inclusive Innovations Week, a city-wide conference to engage in discussions about improving the city of Pittsburgh, she saw an opportunity.

What she had planned as a small conversation during the week — a little group discussing the imbalance in the tech industry over coffee and donuts — turned into a massive brunch called “Where is Black Tech in Pittsburgh?” with representatives from major tech companies and local government offices in attendance. The event garnered major publicity and sparked an ongoing effort to remedy the problem.

“This was such an accident,” she says. “This is definitely the most amazing accident that’s probably happened to me in a long time.”

Cook now has her own organization to address diversity in Pittsburgh’s technology sector to keep the conversation going. After only a few months, she has gathered support from universities within the city, City Council, community organizations and local tech companies. Industry leaders know her name, and they look to her to solve the problem with tech inclusivity in Pittsburgh — and she is up to the challenge.

“I’m so OK with taking this on,” she says. “I really love it here, and because the tech scene is blowing up, there is an opportunity right now for true tech inclusivity.”

Cook is drawing a lot from her travel and career experiences to bring about change. She says her goal is to teach tech industry professionals to reach minority communities where they are — “Reach across the aisle,” — and to encourage those same communities to branch out.

“You can’t stay in your community … you’ve got to come out of your comfort zone and maybe be in spaces that aren’t terribly comfortable sometimes,” she says. “Reach beyond and meet people you don’t know … build relationships with people that don’t look like you.”

This article appears in the July 2017 issue of Pittsburgh Magazine.
Categories: Community Feature