Carla Barnhart says Cranberry Township feels like Pittsburgh, even though it's a suburb. 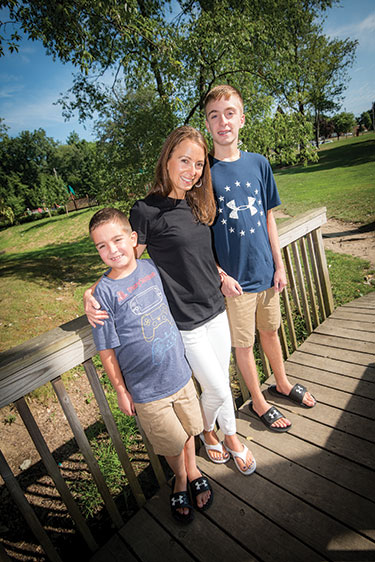 CARLA BARNHART AND HER SONS | PHOTO BY CHUCK BEARD

Like many born-and-bred Pittsburghers, Carla Barnhart’s dalliance with another city didn’t last for long.

After she and her husband, Tim, were married, they relocated to the Washington, D.C., area, where they lived for eight years. When they had their first son, however, they decided to return to Pittsburgh to be near their families.

“It’s the boomerang effect,” Barnhart, 42, says. “Everyone that was born in Pittsburgh wants to come back to Pittsburgh.”

She and her husband both grew up in the South Hills; she was raised in Castle Shannon, and her parents still live there. Upon returning, however, they chose Cranberry Township — as a matter of convenience and economics. The proximity to multiple highways made it convenient for Tim’s commute (he’s an engineering manager with GE Power Conversion). Lower tax rates were also enticing; a 2016 report by the Butler Eagle found that similarly priced properties saw an overall tax savings of 35 to 40 percent against Allegheny County rates.

The sprawling northern suburbs were a shift for the Barnharts. Does she miss the densely packed area where she spent her younger years? For at least one very practical reason, not really. “The South Hills is great,” she says, but “it takes forever to get anywhere.”

The South Hills and Cranberry Township share one big common characteristic. “It still feels like Pittsburgh, even though it’s a suburb.”

After settling in and having a second child — their boys are now 15 and 9 — Barnhart began to discover the benefits of raising a family in Cranberry.

“There are so many [activity and event] sign-ups through the municipal building,” she says, citing milk and cookies with Santa Claus, a Halloween parade, summer community days and  more. “Once your kids are in school, you start catching on to what’s going on. There’s a lot for families,” including a personal favorite, Cranberry Township Waterpark.

Barnhart is also quick to praise Seneca Valley School District, particularly in terms of its response to the COVID-19 pandemic. “Seneca has the best [online learning options] of any I’ve seen,” she says. “We have so many options.” That statement also applies to the dining choices in the area; while there’s a proliferation of chain restaurants, Barnhart is also a fan of eateries including Real Thai Cuisine, Tamarind and Zuppa’s Delicatessen.

She says she’d like to see a greater buildup of the township’s outdoors infrastructure as it continues to expand; in particular, she says, Cranberry is badly in need of longer bike trails. “There are trails around a couple of the parks,” but “it’d be nice if there was space to really go for a ride.”

She’s optimistic that such improvements are coming, however, given the steady rate of expansion. And although traffic has increased in the eight years the Barnharts have lived in Cranberry (although not nearly to South Hills volumes), she says the steady growth has meant more to do and more community engagement.

“Neighborhoods are just popping up left and right.”