Tereneh Idia’s love of her neighborhood is palpable and fierce. However, she says the inequities people of color face in Pittsburgh are ongoing and urgent. 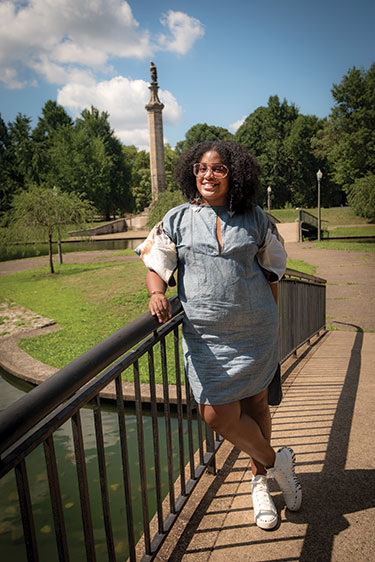 Many say that Mount Washington has the most scenic vantage point of anywhere in the city. Tereneh Idia, 51, is partial to a different vista.

“My favorite views of the city are from the North Side,” she says.

A nearly lifelong Pittsburgher, Idia, a designer and writer, resides in Central Northside, where she spent her high school years. After living on the South Side until she was 10, she lived on the south end of Manchester and in the Mexican War Streets, attending the Falk School and Allderdice High School.

She can easily recall teenage memories: Walking from the North Side to Downtown, going to the movie theater and feeling grown up on trips to buy school clothes.

“I hate to sound nostalgic, but there was an extension of Downtown with the shops and the movie theaters and I really, really loved that,” she says.

After moving away from Pittsburgh, Idia returned in 2015 after living in the Hudson Valley and, for the preceding two years, in Malaysia. “I just kind of felt like, ‘What am I going to do?’” she says.

She returned to Central Northside and has been there ever since. As a nomad with a chronic case of wanderlust, Idia has arranged for a flexible residency; she can get up and go at any time with few strings attached.

Despite not being able to travel because of the pandemic — Idia was supposed to start residencies in Chile and Senegal that have since been postponed until 2021 — she has taken solace in the outdoors, sitting by the river, watching the trains and trying not to make the geese angry.

When she’s not traveling, Idia enjoys drinking beer at Allegheny City Brewing — she’s partial to its Farmhouse Ale — and perusing the stacks at City Books. She also is a fan of Leo’s Public House, Pauline’s Caribbean Soul Cuisine, Mayfly Market and the Carnegie Library; she says she’s still mourning the loss of Wilson’s Bar-B-Q. She makes frequent visits to Subba Nepalese Restaurant on East Ohio Street and the iconic Gus and Yiayia’s shaved ice cart. (She’ll switch between the watermelon or lemon shaved ice, but mostly sticks with lemon.)

Idia’s love of her neighborhood is palpable and fierce. No matter how fond she may be of the North Side, however, she says the inequities people of color face in Pittsburgh are ongoing and urgent. That’s a reality that is often covered up by civic pride.

“There’s such an imbalance if people are saying, ‘oh, Pittsburgh is so great, I love it.’ And it literally is one of the worst, if not the worst city in America to be a Black woman. How do you reconcile those two things?” she asks. “If it’s so great for other people and it’s killing or under-serving or poisoning or underpaying me as a Black woman, for example, then that doesn’t really work.”

According to Idia, we can continue to speak positively about pierogies, tech hubs and UPMC, but we should mention samosas, the Shawnee and the Freedom House with the same weight.

“The multicultural tapestry of Pittsburgh is so much more interesting than the way that Pittsburgh usually gets talked about. It is a multicultural, beautiful city with all different kinds of people,” she says. “And that’s what we need now and into the future. That’s what we should start celebrating more intentionally.”