Where are They Now? Pittsburgh Football Players and Coaches

One of them is still deeply involved in football with his alma mater. 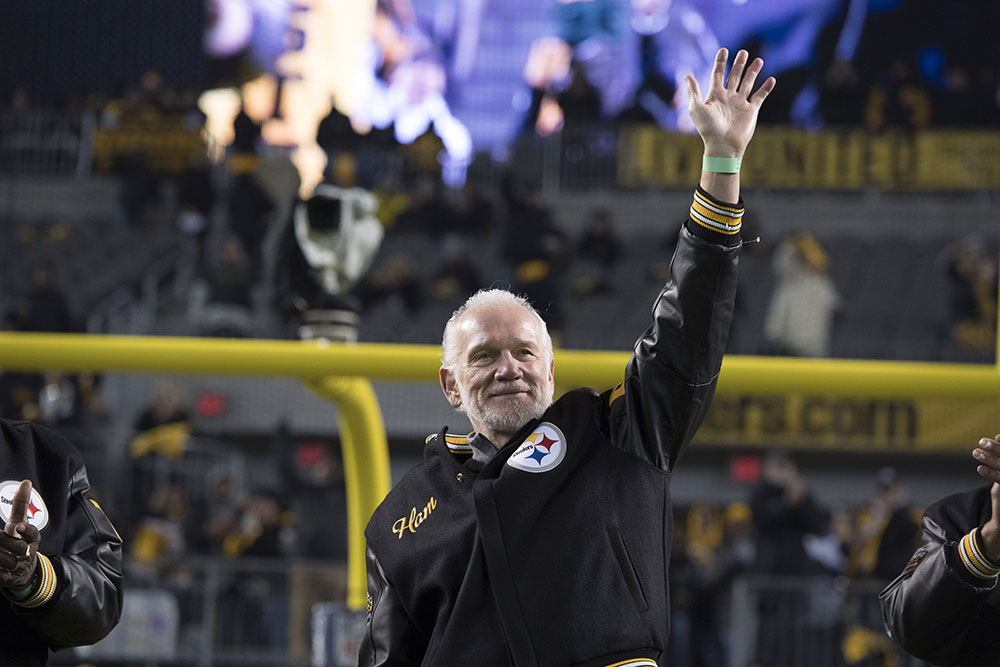 (Editor’s Note: This article has been updated since its original posting in Feb. 2020)

Jack Ham
Pittsburgh Steelers great Jack Ham’s voice is never far from those who know where to find it — as Penn State fans know.

Since his retirement from the NFL in 1982, the pro-football and college Hall-of-Famer, considered by many to be the greatest outside linebacker of all time, has been working in radio, including stints covering the NFL. These days, Ham — a legendary graduate of Penn State — is a color football analyst with the Penn State Sports Network.

“I just finished my 20th year of working with Steve Jones, the play-by-play guy,” he says. “I’m signed up through three more years.”

Ham’s ties to Penn State are deep. Describing himself as a not-so-sought-after recruit, the Johnstown native was a last-minute addition to then-coach Joe Paterno’s recruiting class in 1967 — and that was only because a player already committed to Penn State decided to go elsewhere. But under Paterno’s system, Ham, 71, was given a chance to shine. He was drafted by the Steelers in the second round of the 1971 draft and went on to win four Super Bowls during a career that spanned 12 years — including being named a Pro Bowl player eight seasons in a row.

“My career jump-started when I was recruited by Penn State,” Ham says. “When you need help, and they give you an opportunity, I think you never forget that.” 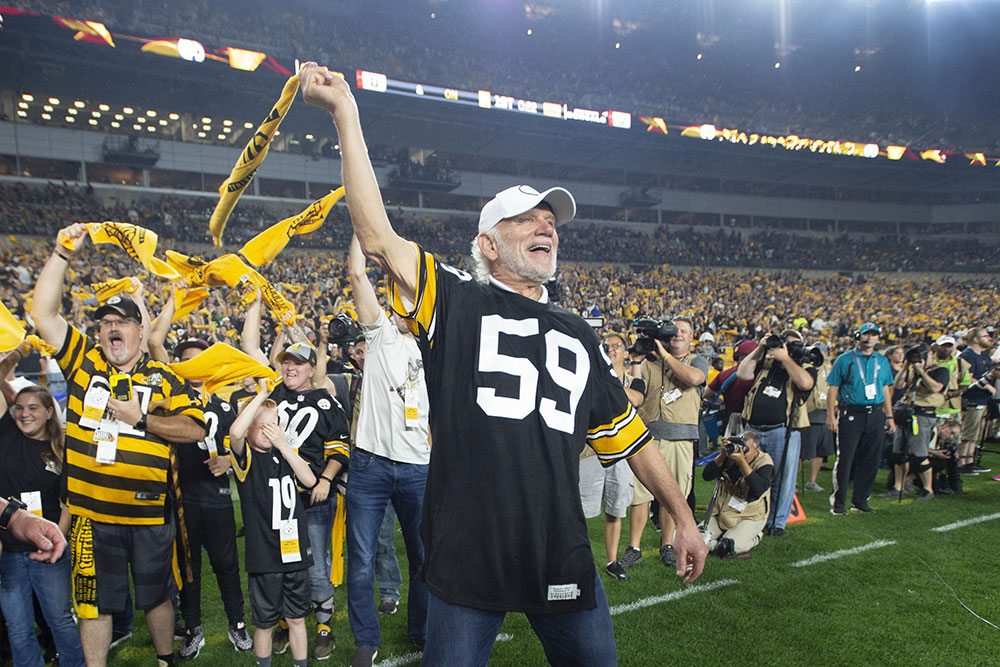 During college football season, Ham travels from his home in the Pittsburgh area to Beaver Stadium for Thursday football practices and remains with the team for games, both home and away.

A fan of theater — he and his wife, Joanne, take in shows locally and in New York City — Ham also serves as senior vice president at Targe Energy, a Pittsburgh-based company that operates surface coal mines, reclaims waste coal and performs contract drilling.  And while you can take the boy out of Johnstown, you can’t take the Johnstown, and its love for hockey — the former Johnston Jets inspired the 1977 film “Slap Shot” starring Paul Newman — out of the boy.

Several years ago, Ham — who grew up skating in the same arena where the Jets played — became part owner of the Johnstown Tomahawks. “When I came to Pittsburgh, I got to know Mario [Lemieux] and so forth,” he says. “My hockey interest started way back when and just grew.”

In November, Ham was named to the NFL 100 All-Time Team, a roster of 100 players and 10 coaches perceived as the greatest in their respective positions.

Jack Lambert
Following Jack Lambert’s retirement from the NFL in 1984, the Steelers linebacker famed for his toothless snarl has spent time as a volunteer deputy wildlife officer and also coached youth baseball and basketball teams for his four children in Worthington, just outside of Kittanning, where he also gave his time maintaining the town’s ball fields. Intensely private, the NFL Hall-of-Famer, 67, rarely is sighted in Pittsburgh except for occasional memorabilia signings, including one in June that also featured Pittsburgh Pirates great Dick Groat. In November, he was named to the NFL 100 All-Time Team, a roster of the greatest players in their respective positions. 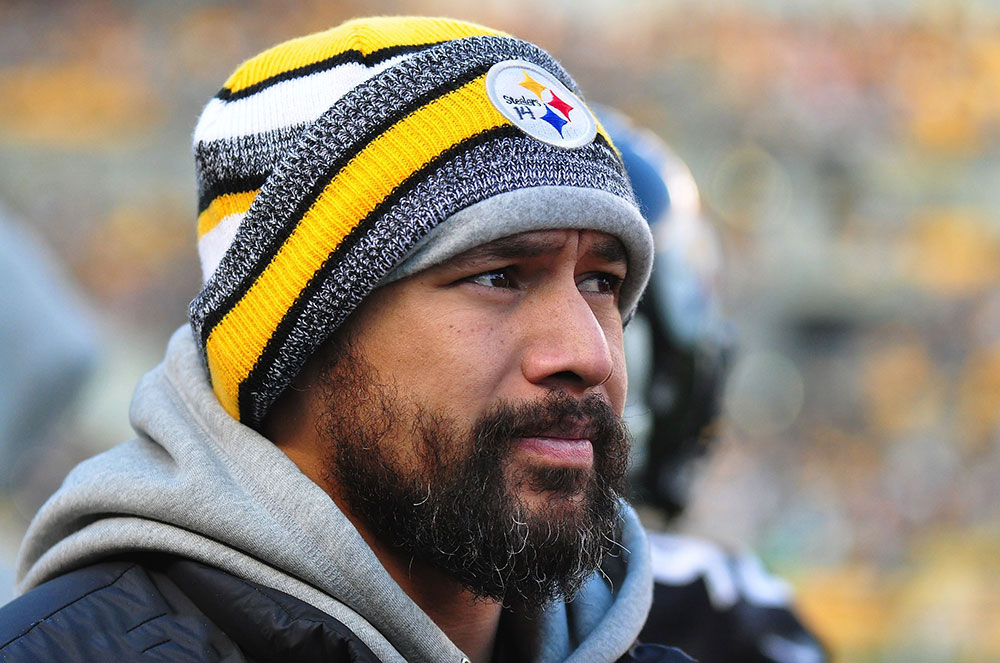 Troy Polamalu
Legendary safety Troy Polamalu, 38, has mostly stayed under the radar since his retirement from the Pittsburgh Steelers in 2015, but there are instances of him returning to the public spotlight. Last February, Polamalu was named head of player relations for the short-lived Alliance of American Football, which shuttered operations in the spring of 2019. Last August, he starred opposite Kansas City Chiefs quarterback Patrick Mahomes in a humorous commercial for Head & Shoulders shampoo. In February, his first year of eligibility, Polamalu was elected to the Pro Football Hall of Fame as a Modern-Era member of the Class of 2020.

Dave Wannstedt
Dave Wannstedt, a Pittsburgh native and former head coach of the University of Pittsburgh football team, returned to coaching in the NFL in 2010 before retiring near the end of 2013. Since then, he has been a FOX Sports studio analyst. The 67-year-old father of two and grandfather of six splits his time between Naples, Florida, and Chicago.

Tommy Maddox
A veteran of the XFL, Arena Football League and the NFL, former Pittsburgh Steelers quarterback Tommy Maddox led the team to a surprising 10-5-1 record in 2002 and was named the NFL’s Comeback Player of the Year. Following his retirement from the NFL in 2006, after being supplanted by Ben Roethlisberger, the father of two, 48, returned to his native Texas, where he most recently coached youth baseball.

Johnny Majors
Johnny Majors, the iconic University of Pittsburgh head football coach, who served for three-year stints both in the 1970s and the ‘90s, retired from coaching after the 1996 NCAA season. Until 2007, he acted as special assistant to the athletic director and chancellor at Pitt. Majors died in June at the age of 85.