Local designer Karolyn Spagnolo got her dream assignment when she was one of more than 150 volunteers chosen to decorate the White House for this year’s theme, “We the People.” 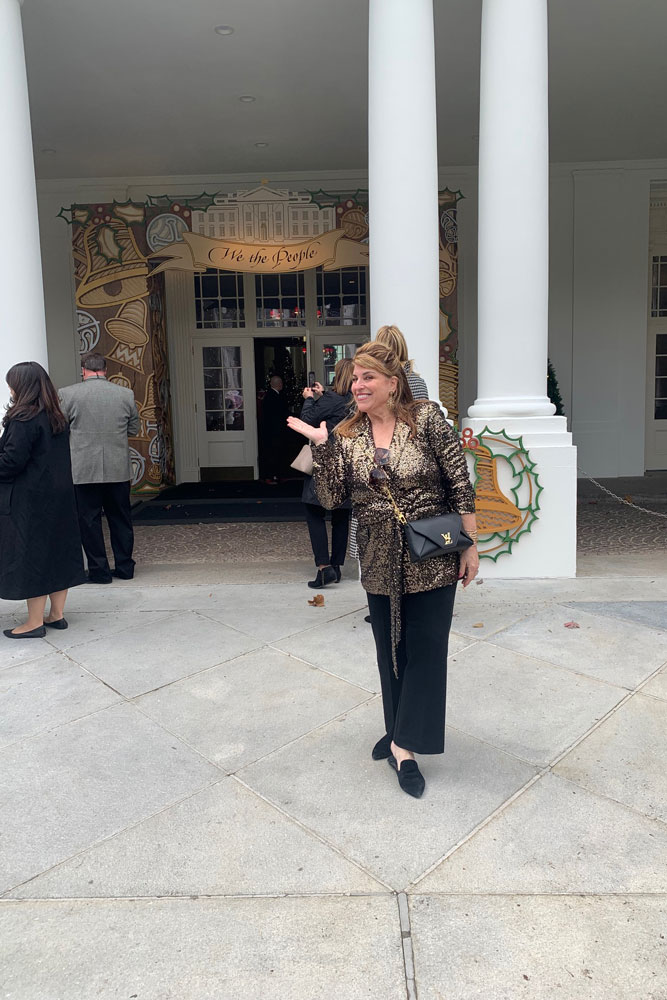 With a long career designing beautiful spaces, Oakmont-based interior designer Karolyn Spagnolo is at the top of her field; she’s earned certifications from all three major design trade organizations and her work has been featured in showcase homes, newspapers, magazines and on HGTV.

But the one job she has been chasing for several years offered no pay, had to be completed in one week over the Thanksgiving holiday, required her to pay for her own housing and transportation — and she had to submit to a federal background check. 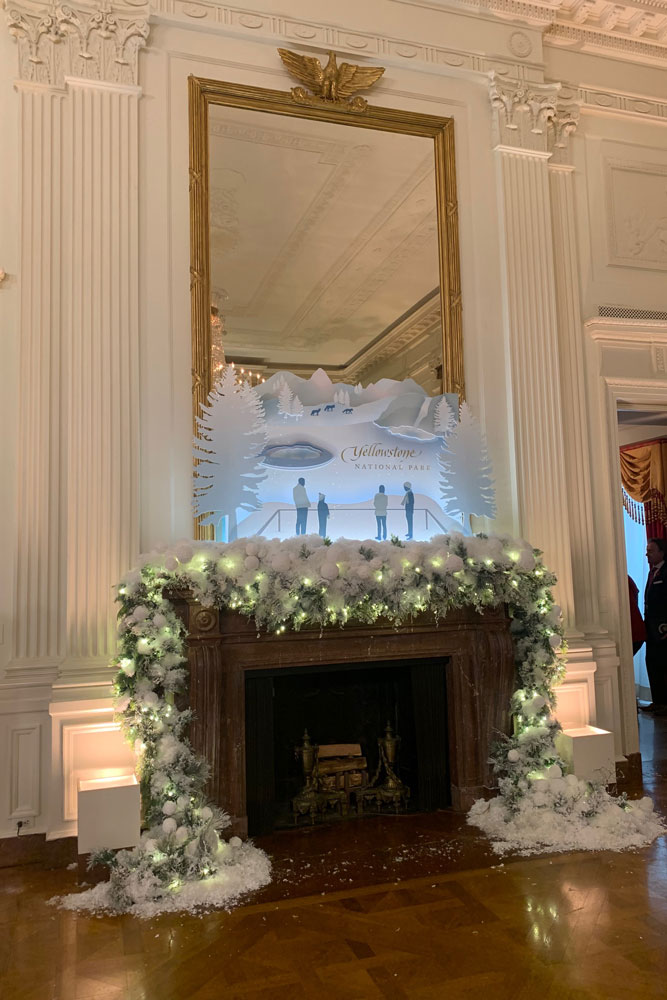 The much-coveted appointment? A volunteer Christmas decorator for the White House.

“This is the third year that I applied and I finally got in,” says Spagnolo, who also operates a residential holiday decorating arm of her business November through January. “I was so disappointed the last two years that I was on the verge of crying.”

On Nov. 21, Spagnolo was one of more than 150 volunteers who arrived at the White House to decorate. Together, they brought this year’s White House theme, “We the People,” to life. First Lady Jill Biden has described the theme as a representation of the Americans she has met in the last two years who have shown her the “Soul of our Nation.”

Among the displays are 77 trees, including themed trees with tributes to Gold Star families, 25 wreaths and more than 83,000 lights, according to a White House press release. There were also homages to family traditions with a recipe tree; a menorah — made of wood from a Truman-era renovation — in the Cross Hall; illustrations of the Biden pets, Willow the cat and Commander the German Shepherd; and mirrored decor in which visitors can see themselves.

There was also tight security.

“The entire crew had to take daily COVID tests and credentials were checked four to six times daily before you were allowed to enter the White House,” Spagnolo says, noting Secret Service agents were everywhere on the premises. “If your birthday was off, you were pulled from the daily list.”

Before they got to work, volunteers had to travel to an off-site facility to retrieve decorations from the official storage archives, Spagnolo says.

“The White House is no different from your own home,” she says. “You pull what you have, you make decorations and rework what you own. There is a budget and it is strictly adhered to.” 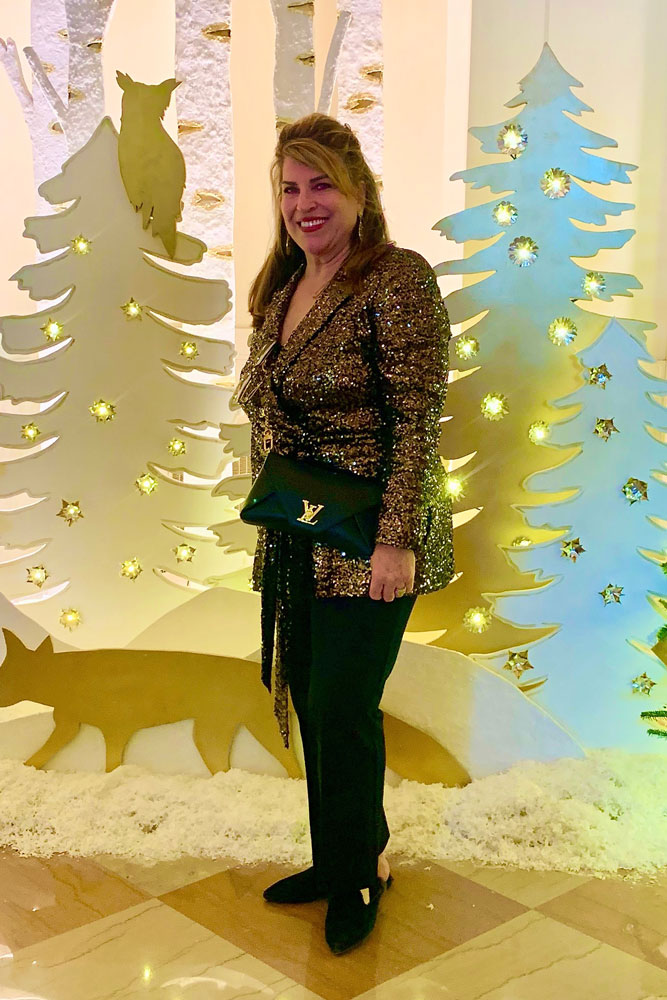 Making the East Room and the Green Room Jingle

The volunteers were split into groups, with Spagnolo assigned to the Jingle Group. Her team executed the design plan for the East Room, highlighting National Parks and communion with nature, and the Green Room, where this year’s theme is the unifying power of music.

“There were digital images of the proposed design, but it kept evolving as the week went on,” says Spagnolo, who was charged with putting together the fireplace mantels.

In the East Room are 10 trees and four mantels, which Spagnolo says have false fronts made from faux marble and Plexiglass so decor can be installed without doing any damage.

To the left of the main mantel is a small forest of decorated trees sitting among a base of flocked snow.

Adorned with a portrait of President Theodore Roosevelt, who helped establish 150 national parks, the East Room also features a Neapolitan creche. Containing more than 40 figurines, most dating back to the 18th century, the creche has been displayed there every holiday season since 1967.

In the Green Room, where her background in decor installation came in handy, Spagnolo describes the decor as being mostly DIY. “It is very labor intensive,” she says.

Inspired by choral masterpieces and the holiday’s familiar carols, the Green Room features sleigh bells, hand bells, and jingle bells to signal the sounds and songs of the season.

Spagnolo says the room’s bells were made from plastic cups of all shapes and sizes and spray painted gold. Some were hung from red and green ribbons on a Green Room window to great effect. 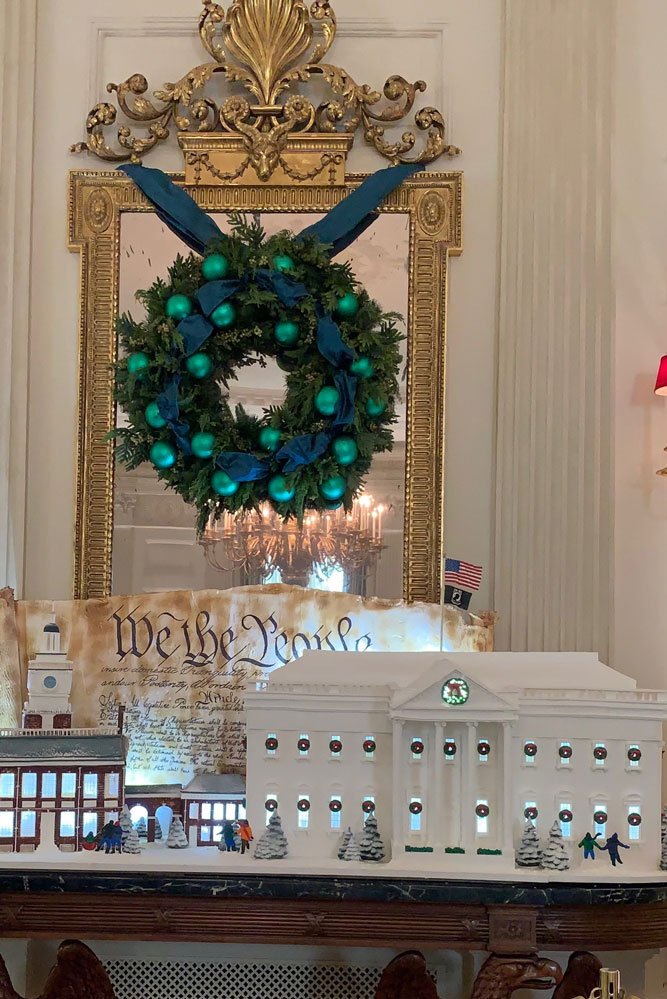 Home to the official White House Christmas tree, an 18.5-foot-tall concolor fir from Auburn, Pa., the Blue Room includes renderings of the official birds from all 57 states, territories and the District of Columbia.

Every year, the room’s chandelier is removed to accommodate the Christmas tree’s full height. This year’s tree was presented by the Shealer Family of Evergreen Acres Christmas Tree Farm, the 2022 Grand Champion Grower in the National Christmas Tree Association’s annual contest, according to the White House.

The State Dining Room is home to the “We the Children” tree, reflecting the First Lady’s career as an educator. It is filled with self-portrait ornaments created by students whose teachers were named “Teacher of the Year” in their state. Hanging from the fireplace mantel are the traditional Biden family stockings, each filled with an orange in the toe (a tradition from Jill Biden’s grandmother).

Also in the State Dining Room is a 300-pound gingerbread White House alongside a sugar cookie replica of Philadelphia’s Independence Hall, where both the Declaration of Independence and the U.S. Constitution were signed.

In the Library is a copy of the Declaration of Independence; printed in 1845, the engraving was donated to the White House in 1985. The East Colonnade was transformed into a wintry birch forest scene, with handmade woodland animals sitting in the snow. 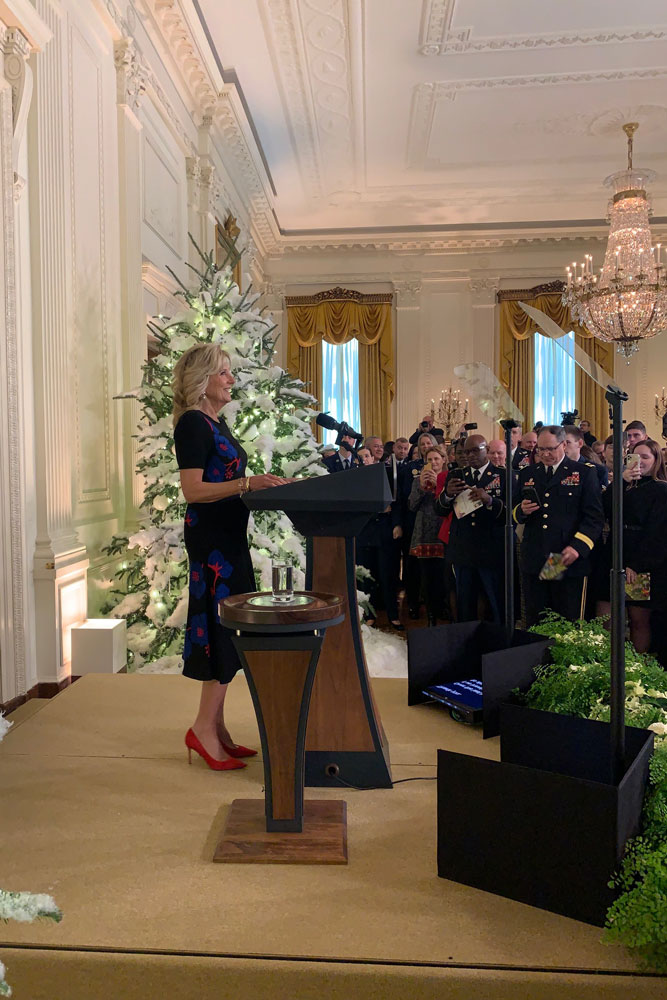 Behind the Scenes at The White House

Spagnolo says she was amazed by the amount of DIY involved in the decoration process as well as the budget management and direction to reuse decorations. The volunteers also were instructed to proceed with caution so as not to damage period fabrics.

“Every morning before we started we had to listen to the Secret Service, the curator and the head of the decorating committee reviewing the same protocols; how to operate and what we were not allowed to touch,” she says.

The volunteers were fed their meals, prepared by the White House chefs, in the State Room.

“The beef Bolognese was amazing, so were the French macarons,” Spagnolo says. “They were double the size and to die for.”

The entire volunteer team was also invited to attend the press unveiling for the holiday decor. This time when they arrived, they came through the front door like any dignitary and were escorted to the Blue Room, where the U.S. Marine Band played. They were then invited to stand behind the First Lady as she made her remarks to the press.

“I was just 8 feet away from her,” Spagnolo says. “She is very gracious and very polished.”

In every photo she took at the White House, Spagnolo is grinning from ear to ear. The experience was a dream come true for her, she says — and the savvy decorator left a piece of herself behind as well.

“I did a recipe card for the tree,” she says. “I left my mom’s Austrian apple strudel.”

For a virtual tour of “We the People,” the 2022 White House Holiday Decorations, visit here.