What Will Pittsburgh Penguins GM Ron Hextall Need to Do as Trade Deadline Looms?

Big games between now and the NHL’s trade deadline will dictate whether a blockbuster deal or a complementary addition to the roster is necessary. 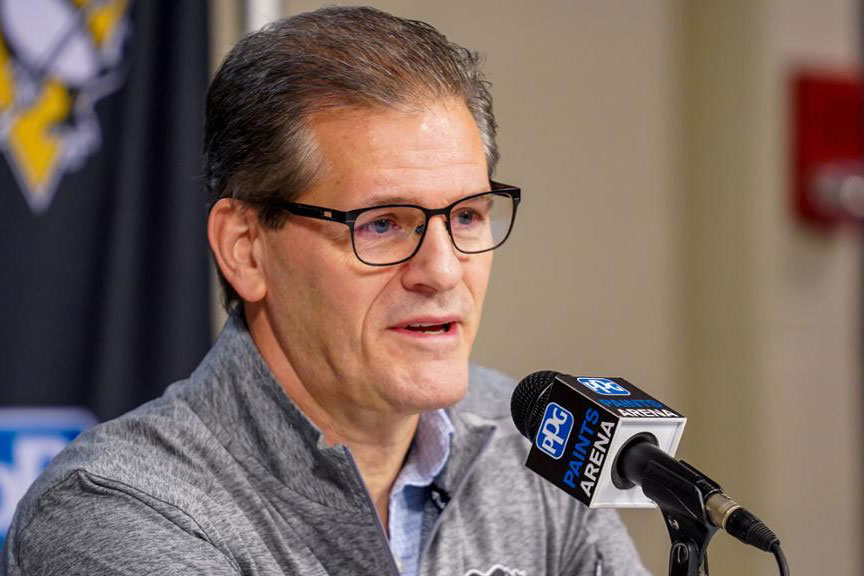 Scheduled visits to Tampa Bay and Carolina this week loomed as revealing for a Penguins’ team honing in on where it wants to be eventually but uncertain at present as to whether it has what it’ll take to get there.

Those who doubt the latter characteristic have begun looking ahead to the March 21 NHL trade deadline with great anticipation.

Can anything be done to address a perceived need for more secondary scoring?

Is better than Casey DeSmith required at backup goaltender?

Is there a way to add some size, physicality and grit, particularly on defense?

General Manager Ron Hextall has a lot to ponder, and much to sort out due to complications such as the salary cap and the type of capital that might be necessary to offer up in exchange for what the Penguins ultimately decide they require.

His predecessors as GM found a way in each of the franchise’s first five runs to a Stanley Cup.

In 1991, it was Ron Francis and Ulf Samuelsson coming aboard in advance of the deadline (both riding white horses, as it turned out).

In 1992, it was Rick Tocchet and Kjell Samuelsson arriving, and Mark Recchi and Paul Coffey departing.

In 2009, Chris Kunitz became a Penguin in late February and Bill Guerin did the same in early March.

In 2016, Justin Schultz and Carl Hagelin were late-season additions.

In 2017, Ron Hainsey became a low-profile but high-impact acquisition.

Even if 2008, when the Penguins reached a Stanley Cup Final but ultimately came up sort of the Cup, Marian Hossa and Pascal Dupuis came late to the party but managed to extend it into the wee hours.

All Hextall needs to do, it seems, is make the right deal at the right time for the right price.

Pull that off and we can start planning the next championship parade, and taking bets on who’ll be the next Penguin to be photographed chugging a beer while strolling down the Boulevard of the Allies (Schultz doing so in June of 2017 made for one of the more iconic celebration moments in Pittsburgh sports history).

Of course, Hextall’s job might be easier said than done given the aforementioned complications attached to pulling off a trade-deadline transaction.

But there’s something the Penguins can do in the meantime, and in the event the deadline comes and goes without altering the balance of power in the Eastern Conference.

They’ve exceeded expectations to this point, but not to the degree that they can be legitimately perceived as contenders just yet.

The schedule is tougher after the all-star break than it was during the unofficial first half of the season. How the Penguins navigate it will tell the players and coaches, as well, as Hextall, what they need to know regarding the state of the Pens’ playoff readiness.

Their performances under such circumstances, if interpreted correctly, can be critical components of their continued evolution and development toward that end.

So can how they prepare.

“The way we practice, the way we are asked to do certain things, the commitment to certain things, what is asked of us in this organization, it’s held, I think, to a higher standard,” veteran forward Brian Boyle observed this week. “You see with our leaders and our best players how hard they work, how committed they are every day to trying to learn something new or trying to improve upon something. It’s a certain mindset that they have that trickles down throughout the team. We’re detailed in our meetings with the coaches and we have to have that mentality, that mindset that we need to get better.

“It’s March now but we’re still not a finished product. We need to have a mindset that we can get better.”

The better they can get between now and the deadline, the less of a splash Hextall will have to make, theoretically, at the deadline.

It’s either that or wait and see what Hextall can or can’t conjure up and hope for the best.

The Lightning, Hurricanes and the rest will tell us soon enough the direction in which the Penguins need to head.