What Were the First Words Written About Pittsburgh?

Searching for the story behind the first written mention of the Pittsburgh area, which purportedly occurred 300 years ago. 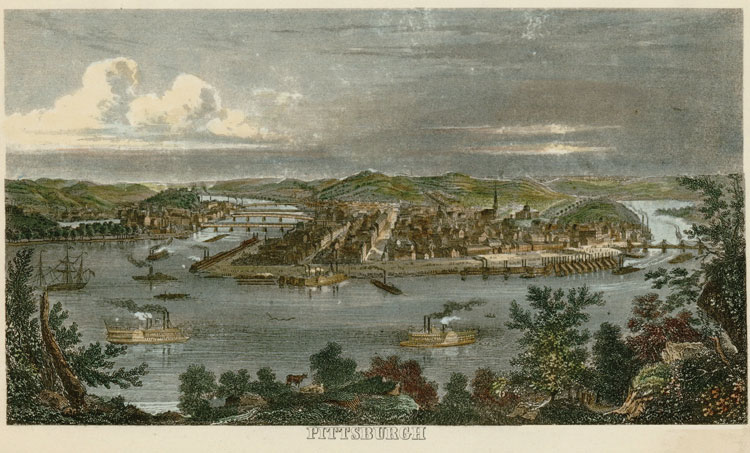 If you were paddling by the site of our city 300 years ago, what would you notice? What would you say? What we know as Pittsburgh was then wilderness.

Michael Bezallion’s visit to western Pennsylvania in 1717 represents the start of written history about this area. If you go to the Wikipedia page for “Pittsburgh,” for instance, he gets a no-nonsense mention: “Michael Bezallion was the first to describe the forks of the Ohio in a 1717 manuscript.” He saw this place in its raw state.

For centuries, many native peoples had passed through these parts, and perhaps the French explorer René-Robert Cavalier, Sieur de La Salle came down what we now call the Allegheny and Ohio rivers in 1669 (although many doubt that accomplishment because of scant documentation). Apparently Bezallion actually wrote something about the confluence of rivers here, but what? And where is the manuscript?

I started asking lots of local historians for help. John Schalcosky, who writes the “Odd, Mysterious & Fascinating History of Pittsburgh” Facebook page, discovered a vital mention of Bezallion in the landmark book “Pittsburgh: The Story of an American City,” compiled by Stefan Lorant in 1964. In the back of that book, several collaborators put together a 200-year chronology. Their first entry: “1717 Michael Bezallion, Pennsylvania fur trader, passed the future site of Pittsburgh en route from the Illinois country to Philadelphia, where he made a report of the trip.”

​Googling “Bezallion” produces the same information. But you also find mentions of Peter Bezallion, a prominent trader in eastern Pennsylvania. Following clues about Peter and his history, I found that the Bezallions (or Bisaillons or Bezellons, among many spellings) were a French family from the town of St. Jean d’Aubrigoux in the Auvergne region; four brothers emigrated to New France (modern-day Quebec) around 1680 and became active in fur trading. Michael, born in 1661, was a founding settler of Detroit; he worked for his brother Peter, setting up a trading post or depot in the future Motor City.

A website about the Polish origins of Sandusky, Ohio, points out that in 1718, Bezallion “drew a map to show the routes of fur traders from Canada to the Mississippi River, which was as much as anyone knew of the Indian trade at the time.” It doesn’t say where that map is located.

Other sources indicate that Michael supplied information to James Logan, a former secretary to William Penn and a future mayor of Philadelphia, who had the greatest library in Colonial Pennsylvania; it may be that Logan received the fabled report in which Bezallion first mentioned the forks of the Ohio, which the French called “La Belle Riviere.”

I have found no source that reveals where exactly that document might be today. I don’t doubt that Bezallion wrote something, but I’ll have to keep searching for the exact words of that first visitor who wanted to tell somebody else about this unusual place where rivers come together.

Special thanks to Brian Butko at the Heinz History Center and to Suzanne Johnston at the Carnegie Library of Pittsburgh for their help with this search.

This article appears in the July 2017 issue of Pittsburgh Magazine.
Categories: Rick Sebak