What We're Reading in July: The Pioneers

The Pioneers is historian and Point Breeze native David McCullough’s retelling of the settlement of the wilderness northwest of the Ohio River, which contained the future states of Ohio, Indiana, Illinois, Michigan and Wisconsin. 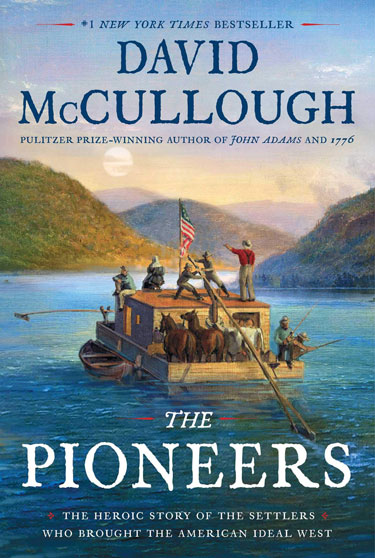 In 1787, the United States of America was a country in its infancy. The Revolutionary War had ended only four years prior; already, the country was in the midst of a financial panic. Trade was at a near standstill and the government-issued currency was almost worthless. It was during this crisis that Massachusetts minister Manasseh Cutler set out to persuade Congress to open up the vast Northwest Territory to settlement.

The Pioneers is historian and Point Breeze native David McCullough’s retelling of the settlement of the wilderness northwest of the Ohio River, which contained the future states of Ohio, Indiana, Illinois, Michigan and Wisconsin.

In the winter of 1787-1788, the first pioneers set out from New England. As McCullough writes, this was “hardly the best time of year to be setting off for the far wilderness. They would be traveling on foot the entire way until reaching the headwaters of the Ohio, so even under ideal conditions they would be moving at a speed of little more than one mile an hour, or about ten miles a day on an overland journey of some 700 miles that included the mountains of western Pennsylvania.”

These pioneers arrived in Pittsburgh in the spring of 1788. The future steel city was quite a different place back then.

“Pittsburgh at the time, a crude frontier settlement of no more than 150 log cabins and houses, was described as ‘an irregular poor built place’ alongside old Fort Pitt inhabited by ‘a lazy set of beings’ and where ‘money affairs’ were at a low ebb. Its chief export was whiskey. But with its key location at the headwaters of the Ohio, Pittsburgh was the Gateway to the West and almost certain to have great promise.”

McCullough, the author of acclaimed biographies of John Adams and Harry S. Truman as well as a history of the Johnstown Flood, has twice been awarded both the Pulitzer Prize and the National Book Award. In 2013, the city of Pittsburgh renamed the 16th Street Bridge in his honor. He writes history with a penchant for detail and character that would please any lover of fiction. This story of the country’s push westward is told through the eyes of Cutler, his son Ephraim, General Rufus Putnam, who led the first expedition, as well as physician Samuel Hildreth and architect Joseph Barker. Together they would found the community of Marietta, Ohio, at the confluence of the Ohio and Muskingum rivers.

Three conditions that were first written into the framework of the Northwest Ordinance — the freedom of religion, free universal education and the prohibition of slavery — continue to this day to inform our aspirations as Americans. Drawing on rare diaries and letters written by the key participants, McCullough is able to present a firsthand account of the hardships and deprivations faced by the intrepid pioneers as they set out to expand America both in terms of its geography and the nation’s character. “The Pioneers” is a timely reminder of America’s best self.

JULY 23
Philippines-born writer Gina Apostol’s American debut, the novel “Gun Dealers’ Daughter,” won the PEN Open Book Award in 2013. Tonight she visits Alphabet City at City of Asylum to discuss her latest work of fiction, “Insurrecto.” The novel, which was named one of Publishers Weekly’s Best Books of 2018, follows an American filmmaker and her Filipino translator as they travel across Rodrigo Duterte’s Philippines to research a clash between Filipino revolutionaries and an American garrison in the early 1900s.
NORTH SIDE: 40 W. North Ave.
412/435-1110, alphabetcity.org