What To Expect When You Visit Pittsburgh’s New Cap Park

The I-579 Cap park aims to reconnect the Hill District and Downtown, after construction separated them more than 60 years ago. 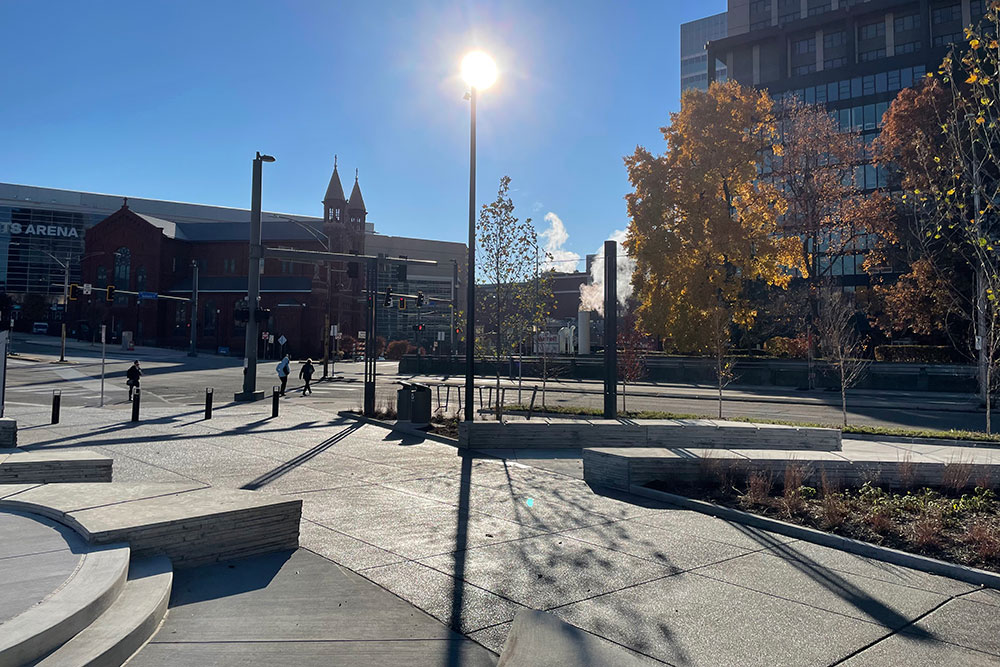 In the heart of the concrete jungle — or rather, steel jungle —  there’s a not-so-little patch of green.

The I-579 Cap park was officially dedicated Monday after a ribbon-cutting ceremony on the 3-acre public space, which was built above Interstate 579. It’s bordered by Bigelow Boulevard, Centre Avenue, Chatham Street and Washington Place, and serves the grand vision of reuniting the Lower Hill District with Downtown Pittsburgh.

The neighborhoods’ connection was severed in the 1950s and early 1960s with the construction of a stretch of highway called Crosstown Boulevard. Compounded by the construction of the Civic Area, during which more than 1,300 structures were razed and more than 8,000 residents of the once-thriving Hill District were displaced, the completion of the I-579 portion left the Hill and its people alienated from the city center.

Gov. Tom Wolf said at Monday’s ceremony. “And this is finally a way to address that injustice.”

The park features ample seating with

benches and concrete bleachers, as well as a garden and green space for the people who work and play in the community.

Signs posted around the park feature a character named Keisha, who acts as a tour guide.

“Do you know how special it is for you to be standing right here at the Wylie Avenue entrance?” reads the first sign. “This was the main business corridor of the historic Hill District neighborhood.”

Other signs describe some of the park’s history and architecture; one details the legacy of leaders like Frankie Mae Pace and Martin Delany, while another explains that the concrete path wrapping around the park forms the shape of the Sankofa bird, a mythical creature from the Akan people of Ghana.

“I like that this park honors the past and welcomes the future!” Keisha says on the sign.

The project, formally called the Urban Connector, began in 2019 and cost about $32 million to build. It was funded by a combination of local, state and federal monies, including funds from the U.S. Department of Transportation, the Pennsylvania Department of Conservation & Natural Resources, the Richard King Mellon Foundation, the Heinz Endowments and the Sports & Exhibition Authority of Pittsburgh and Allegheny County.

It was also built with sustainability in mind.

“The lawns are permeable areas capturing stormwater that currently runs off the concrete pavement of I-579. The lawn’s soil composition can absorb up to 6 inches of rainwater,” said Sports & Exhibition Authority on its website. “Additionally, a system of open trench drains will capture stormwater and redirect it to six rain gardens located in the lower northwest corner of the site.”

The park also brings additional trees to the city, providing shade and “thereby reducing the temperature of surrounding buildings and reducing the amount of energy needed to cool those buildings on hot summer days.”